This week, we adopt a slightly different approach, and present some notes on several different topics:

Over several decades of market experience we have learned the hard way that, just as with life in general, there are people you can trust and those you should not. Trust has to be earned over time of course, and one of our aims on this site is to bring you information that we believe to be valid, largely because we have learned to trust the information source. We also try to introduce you to information sources that satisfy our criteria for accuracy and trustworthiness.

Here is a (not at all exhaustive) list of people that we have learned to trust, in no particular order. Some we have met in person, and most are known to each other. All share a distrust of government and institutional propaganda, and the rigged markets controlled by Wall Street. All understand the importance of accurate data determination and abhor false interpretations of that data. I have been trained professionally as a data analyst, and I share that interest in data and the abhorrence of the crappy announcements that often follow its release. All are also aware of the implications of the global pressures on scarce resources and the debt millstones around the necks of almost all western governments.

If you really want to get behind the façade of lies that is dished up to us daily from the media as so-called financial and economic news, you could do no better than check out, as we do, the sources above. As I have already said, this list is my no means exhaustive, and we have many other sources that we trust and follow also.

From now on, we hope to feature a “trusted source of the week” and report on what that person is currently saying about precious metals, and markets in general.

This week we mention Ted Butler, whose work is known and trusted by us, and many many others in the precious metals community. Each week Eric King over at King World News carries a weekly metals wrap with Ted – which for us, is always ‘not to be missed’.

Ted is a man who chooses what he says very carefully. He is definitely not given to wild pronouncements, and always bends over backwards to give people the benefit of the doubt. So when he stated publicly recently that the activities of the big 4 short sellers of paper gold and silver constitutes a criminal enterprise, and that the CFTC was maintaining a deafening silence in the face of such activity, this was powerful stuff indeed.

We will discuss the implications of this further in an item below.

Jim Quinn, over at theburningplatform.com is another who is able to look behind the crap that masquerades as financial news and tease out the details that can expose these false prophets.

The Truth About Consumer Credit

The Federal Reserve reported consumer credit Thursday afternoon. The amount of consumer debt fell for the 15th time in the last 16 months. The dingbats on CNBC used their dire voices to conclude that the American consumer has taken austerity seriously, is truly cutting back on credit card spending. The MSM spouts the usual drivel about how the consumer is getting tired of being so tight fisted and will begin to spend again.

Why is it that supposedly the best financial minds on TV and Wall Street are so stupid they can’t even look at a basic chart, use a calculator and realize that the consumers have not cut one dime of spending? Are they lying on purpose or are they so clueless a 3rd grader could do better analysis?

Below is a chart showing the dramatic decrease in the change of consumer debt. Now let’s get real. Consumer debt outstanding peaked in 2008 at $2.56 trillion. One and a half years later it has PLUNGED to $2.42 trillion. Yeah the consumer sure has buckled down.

Now this is where Larry Kudlow and Maria Bartiromo would have to actually think before they opened their traps. We know that banks have been writing off credit card debt, auto loan debt and other consumer debt at a 9% rate for the last two years. Everyone get your little calculators out. This means that the outstanding balance of $2.56 trillion at the end of 2008 would have been reduced by 13.5% over the last 18 months because the banks wrote it off:

The outstanding consumer debt as you may have noticed is $2.42 trillion. Is a lightbulb going off over your head yet? The American consumer has ADDED $200 billion of debt in the last 18 months. The delusion continues. Americans have done exactly the opposite of what they should be doing. The savings rate has plunged again and consumers are whipping out their credit cards and buying cars with 13% down and financing for 6 years.

I ask you again. How can the million dollar talking heads on CNBC not do this simple 5 minute analysis before reporting falsehoods to the American public?
Revolving credit (credit card debt) is off 14.9% from the peak. Non-revolving debt (auto, furniture, and other loans) is off 1.5% from the peak. 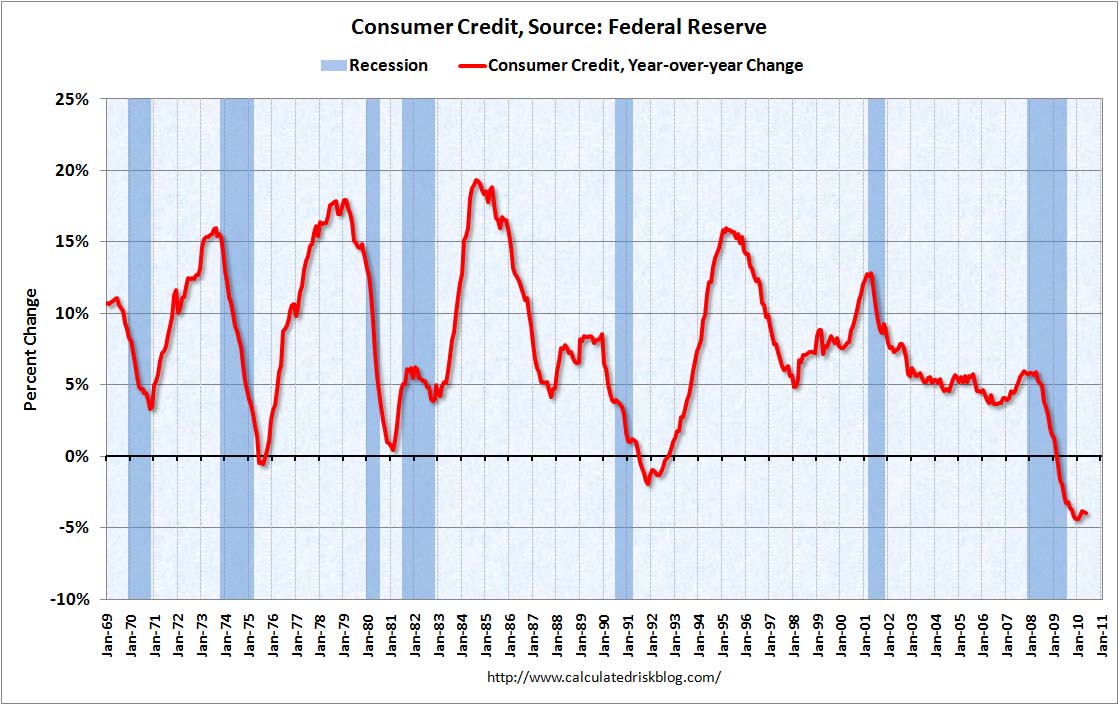 • The Paper Market vs the Physical Market for Precious Metals

Ted Butler, who we featured above, often talks about the disconnect in the precious metals markets that exists between the paper and the physical markets. This disconnect holds for both monetary metals, but is particularly marked in the case of silver.

The  physical market in silver and gold is extremely tight. Investment demand is increasing steadily, as many more people around the globe are becoming increasingly concerned about the fragile and fraudulent nature of our money system. The paper market, on the other hand, is controlled by the banking cartel led by J.P. Morgan, who are able to pull their bids at specific times and force the paper price down, thus allowing them to cover their short positions and to rebuy long positions – then allowing the price to rise to a higher level, where the game starts all over again. The good news is that these forced corrections give us tremendous buying opportunities to purchase physical gold and silver at artificially low paper prices.

It’s just like going into the supermarket and finding your favourite items on sale again and again.