Home / Weekly Newsletters / Evidence of Inflation on the horizon?

A big rebound higher in the NZ dollar this morning has dulled the rise for both metals locally.

However overall we’ve still seen continued moves higher this week, especially for silver with 3% and 4% moves higher respectively in NZ dollars and US dollars.

NZD Gold remains in the steady uptrend it has been in for the past year. While USD gold (bottom half of below chart) has actually broken out of the downtrend it has been in since January with a sharp move higher overnight. We’ll now have to wait and see if NZ$1650 and US$1220 can be broken through in the next little while. But our guess is that we could see a run higher from here now. 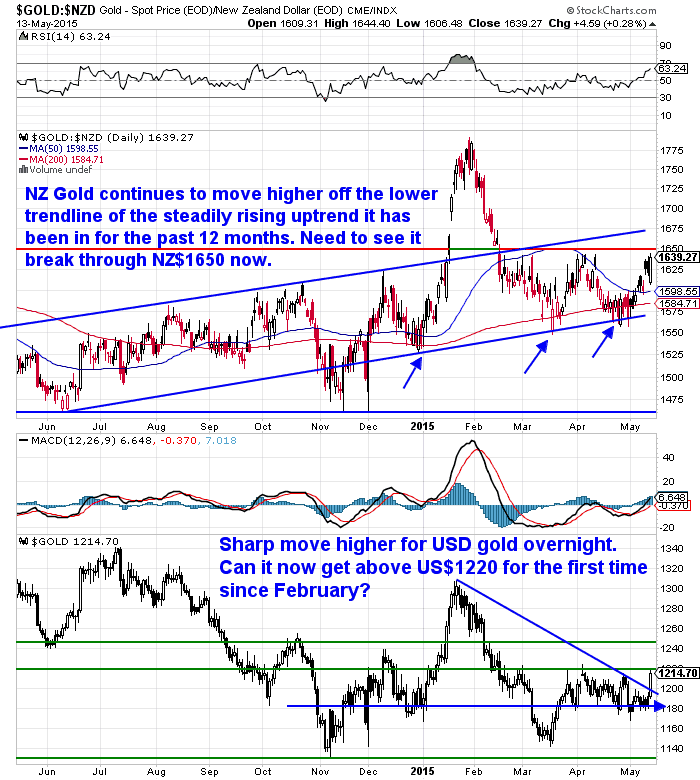 Silver in both local and US currency terms has broken out of the narrowing wedge formation it had been in for most of this year. So we could well see further gains ahead as there is not much resistance between where the price is now and a couple dollars per ounce higher. 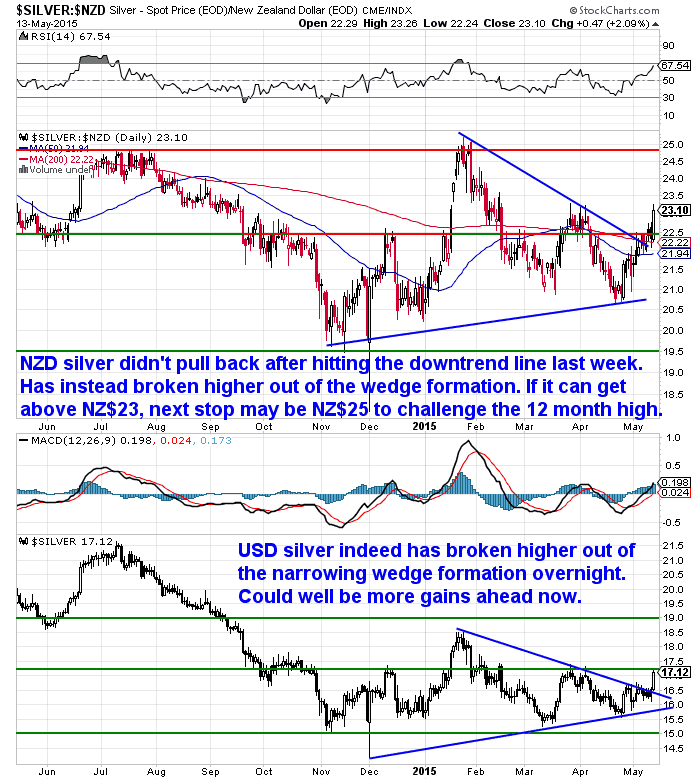 Another positive for silver is this breakout is happening with sentiment still very low as can be seen in the below chart from Kimble Charting Solutions.

Meanwhile a positive for gold is the correlation between it and the European Central Bank (ECB) balance sheet size as outlined by the NIA below: 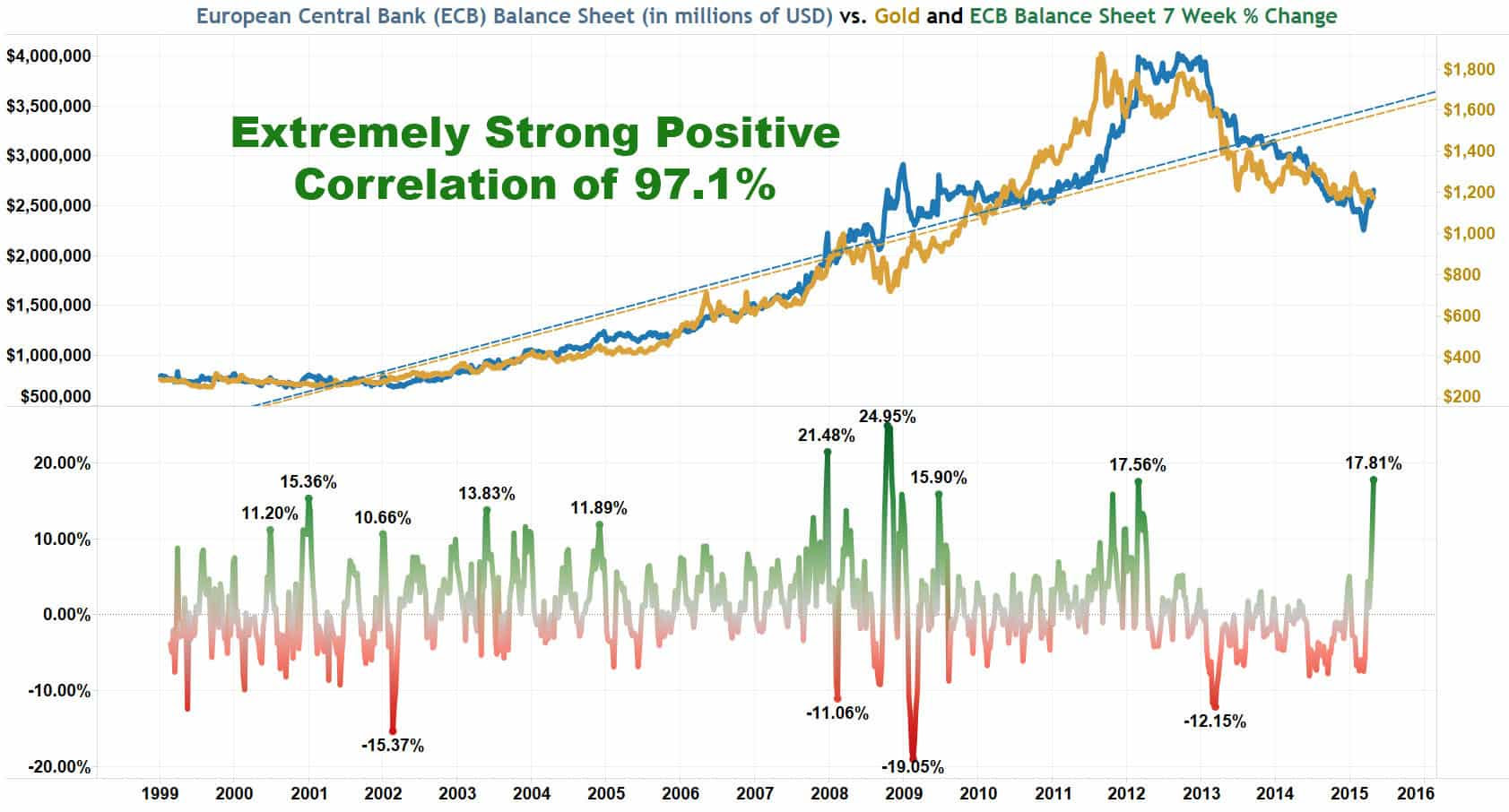 An interesting article by Gareth Morgan and Geoff Simmons of the Morgan Foundation last week. They say:

“Auckland’s housing market is now almost certainly in bubble territory, the most certain sign being the irrational reaction to the Reserve Bank Deputy Governor’s comments two weeks ago. Bank economists and politicians alike have been flailing, claiming that taxing housing isn’t the answer but unable to provide any viable alternatives.

The Reserve Bank is late to the party with its call for changing the tax treatment of housing, but right. These changes should have been done before Brash, before Bollard – that means more than 25 years ago.

These problems caused by tax loopholes and favouring of mortgage lending continue to build a massive misallocation of investment in New Zealand. This undermines our growth, because we do what the tax system tells us to do and invest in housing rather than businesses. The resulting growth in house prices is also the largest driver behind increasing inequality in the Western world.”
Source.

We’d agree that the “growth in house prices is also the largest driver behind increasing inequality in the Western world.”

However we think they fail to look deep enough as to the cause. They believe the tax system and favouring of mortgage lending encourages us to invest in housing, which it likely does.

But would taxation changes necessarily change this?

Our contention would be that a monetary system, where money is debt and that requires ever expanding debt to continue will inevitably lead to assets such as housing to be highly leveraged.

Sure, rules that didn’t so favour lending against residential property may dent this rise in asset prices.

As we mentioned last week, the structure of the banking system in Germany certainly seems to have led to less speculation in housing and more investment in business.

But at the end of the day, we still maintain that it is money that is debt is the chief problem.

Of course this doesn’t stop the Central Planners from trying to “improve” things. You’ve no doubt heard the headlines that the Reserve Bank has announced new LVR restrictions on Auckland housing.

They’re taking aim at property investors as if they are the sole cause of the ever rising house prices. No doubt these will have some unintended consequences and investors will find ways around rules as creative people always do.

Meanwhile there are even more people over on our “side of the ship” expecting lower interest rates in NZ ahead.

“ANZ is the latest cab off the bank rank to predict that the Reserve Bank will cut the Official Cash Rate (OCR) this year.”
Source.

They even reckon there’ll be one cut in June and another in July.

To be honest it starts to feel a little uncomfortable when the bank economists are agreeing with us! The difficult thing to predict now is when there are too many on this side of the ship and when it’s time to take the other side and expect higher rates. Might be too early for that yet as the cuts haven’t started yet.

“More rate cuts likely yet in China after interest rates were lowered on Tuesday.”

So we have China, Europe, Japan, Australia just to name some, all turning up the easy money tap in recent months and weeks. NZ may soon follow too.

But at some stage people may get a surprise as things flip in the other direction.
We read an interesting note from Bill Bonners daily letter this morning highlighting what most wouldn’t expect:

Another Sign Inflation Is on the Horizon
by Chris Hunter, Editor-in-Chief, Bonner & Partners“If you think inflation is gone for good, take a look at today’s chart… 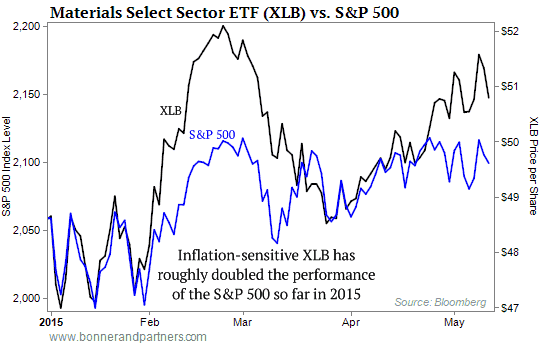 The materials sector includes companies operating in the chemicals, mining, forestry, and construction industries. And along with the energy sector, it is one of the most inflation-sensitive sectors in the S&P 500.

That’s because, like energy, demand rises for basic materials as growth – and inflation along with it – picks up.

That, plus the rise in Treasury yields I flagged yesterday, should give pause to investors betting on a continued deflationary outlook.”

As noted above by Chris Hunter Government Bond Yields across the planet have bounced up sharply since last month, including those in the US, Germany and here in NZ too – as per the chart below of 10 year NZ Government bonds.

Some have called this as likely to be the end of the multi decade bull market in bonds (remember Bond prices rise as interest rates fall, so this is another way of saying interest rates are rising). Although it might be too soon to make that call we’d say, but at some point rates will have to rise. But maybe not just yet.

—– SPONSORED —– Preparation also means having basic supplies on hand.
Are you prepared for when the shelves are bare? It will be interesting to see what the uptake of these are. We’ll be keeping a close eye on them for sure although think we’ll stay on the sidelines for now.

It seems there is a battle looming between the current big, global and top down monetary system and a bottom up, decentralised, local and free market monetary system.

This was well summarised in this Daily Bell article where they discussed a couple of these new developments and concluded:

“Whether it happens with bitcoin or some other cryptocurrency, the architecture of a truly free-market banking system is falling in place. Savings and payment processing platforms are slowly encroaching on the conventional banks. We know which side will win. The only question is when.”
Source. 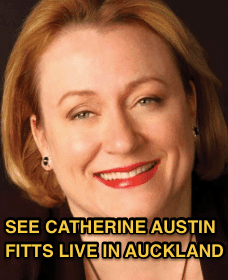 Last week we mentioned Catherine Austin Fitts will be speaking in Auckland on Saturday May 23. We’ve posted full details of this on the website along with a recent interview she did with Greg Hunter of USAWatchDog.

So check that out if you haven’t heard of Catherine and want a taste of what she might cover next weekend.

As it happens in that interview she also touches on this battle between more globalisation and centralisation (think global IMF SDR currency) and the decentralisation being brought about by technology. An interesting interview and worth watching even if you can’t make it next weekend.

Our theory is that holding gold in your possession hopefully offers protection regardless of the outcome. If the elite win out and we get an even more centralised global currency, it appears likely this may have some gold backing.

If freedom wins (here’s hoping that the Daily Bell is right and it does!) we will likely see money of a free market variety with various competing currencies, possibly like the hybrid forms mentioned earlier. History says if people are given the choice  gold (and silver) will likely rise to the top of the list.

With both metals appearing to be building a solid base currently, this offers a good chance to get some of this protection. Get in touch if you’d like help getting some.