We wrote about that situation back then and how it compares to what exists here in New Zealand in this article:

But there is now a very real risk of this happening again in another European nation. Read on to see where that might be:

Here’s Where the Next Bank Deposit “Bail-In” Will Strike…

One shot from a pistol pierced the night right before Antonio Bedin collapsed, dead.

Antonio, a 67 year-old retired Italian, had just committed suicide. He was plagued by health problems and by the loss of his savings.

Antonio was one of thousands of small savers who were wiped out. Antonio lost everything. Then he shot himself.

There was another pensioner who hung himself at his home near Rome after he lost more than $100,000.

Their stories became national news sensations. It generated intense anger at the bail-ins.

A bail-in is when a bank recapitalizes itself by tapping its creditors, including depositors.

Most people think of the money they deposit into the bank as a personal asset they own.

But that’s not true.

Once a deposit is made at the bank, it’s no longer your property. It’s the bank’s. What you own is a promise from the bank to repay. It’s an unsecured liability. That’s a very different thing from owning physical cash stuffed under your mattress. Money deposited into the bank technically makes you a creditor of the bank. You’re liable to get burned from a bail-in should the bank get into trouble.

People in Cyprus had to find this out the hard way in early 2013. People awoke on an otherwise normal Saturday morning to the shock that the money in their bank accounts had been taken by a bail-in to recapitalize the banks.

Not surprisingly, many Italians aren’t just waiting around to get “Cyprused.”

I recently spent weeks on the ground in Italy investigating the ongoing banking crisis. I spoke with a prominent lawyer who told me that most Italians are now distrustful of the banks. They’re keeping a substantial portion of their savings in cash under their mattresses. They’re also buying lots of gold.

I’ve been to Italy numerous times over the years. But this time, I saw something new. There were signs everywhere advertising gold bullion, like the one below. 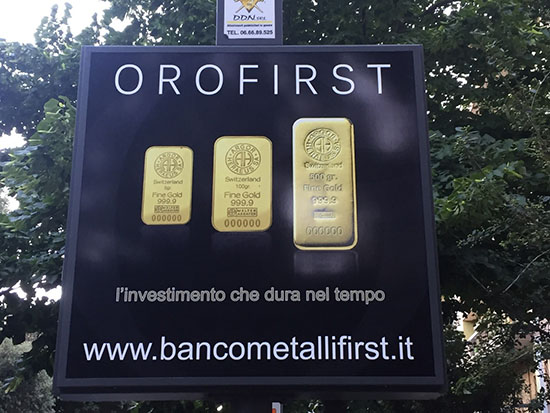 I think it indicates a strong demand for gold and a strong distrust of the banks. It seems to me like a slow motion bank run is already happening. This is the last thing Italy’s banking system needs. It’s further bleeding the capital in the banking system.

I only see the situation getting worse…

Italians are rightly afraid of bail-ins. That fear is leading them to withdraw their savings as cash and also to buy gold. This further drains the banks’ capital, making it more likely they’ll need to do a bail-in to remain solvent, which fuels even more withdrawals. It’s like a self-fulfilling prophecy.

This means that the chances are good that a large number of unsuspecting Italian savers are going to get wiped out.

The thought of potentially many more old, struggling pensioners committing suicide because they got wiped out from bail-ins has enormous emotional power in Italy. It’s like political nitroglycerin.

It would have a catalyzing political effect.

Bottom line, if Italians get Cyprused before the referendum later this year it’s a virtual certainty it will fail.

That’s the unenviable conundrum the current, pro-EU Italian government is facing. They can stall and save the banks through a bail-in, or they can let the whole house of cards come down. Either option is political suicide.

It’s hard to imagine that the frustrated Italian populace won’t vote to give the establishment the finger in the referendum, and humiliate the pro-EU government.

Prime Minister Matteo Renzi has promised to resign if that happens.

If he does, the anti-euro, populist Five Star Movement will almost certainly come to power. They’ve promised to promptly hold another referendum. This one would be on whether Italy should leave the euro and go back to its old currency, the lira.

If Italy—the third-largest member of the eurozone—leaves, it will have the psychological effect of someone yelling “Fire!” in a crowded theater. Other countries will quickly head for the exit, and return to their national currencies.

Economic ties and integration are what hold the EU together. Think of the currency as the economic glue. Without the euro, economic ties will weaken, and the whole project could unravel.

It would be a deathblow to the EU, the world’s largest economy… And it would explode into a global stock market crash like the world has never seen.

The Financial Times recently put it this way:

An Italian exit from the single currency would trigger the total collapse of the eurozone within a very short period. It would probably lead to the most violent economic shock in history, dwarfing the Lehman Brothers bankruptcy in 2008 and the 1929 Wall Street crash.

That’s how important the upcoming referendum in Italy is. It would be the first domino to fall in the collapse of the EU.

Not surprisingly, the unsavory George Soros is keenly aware of what’s going on. He recently said, in reference to the Brexit and events in Italy, “Now the catastrophic scenario that many feared has materialized, making the disintegration of the EU practically irreversible.”

Soros Fund Management has been picking up gold assets and placing bets that stocks will crash.

He’s positioning to make big profits from the coming crisis. And I think we should, too.

That’s exactly why I recently spent weeks on the ground in Italy getting the scoop on this explosive story that almost nobody else is talking about.

There are potentially severe consequences in the currency and stock markets.

New York Times best-selling author Doug Casey and I just released an urgent video with all the details.

Our video reveals how a financial shock far greater than 2008 could strike America on December 4th, 2016. And how it could either wipe out a big part of your savings… or be the fortune-building opportunity of a lifetime.

The video describes specific ways to profit… as well as which stocks to avoid like radioactive waste.

You can get a first look at this video by clicking here.

The article Here’s Where the Next Bank Deposit “Bail-In” Will Strike… was originally published at caseyresearch.com.