Home / Weekly Newsletters / How the China Slowdown Will Impact NZ

Are You a 1st Time Buyer of Gold or Silver?

If you’re one of the many people new to precious metals and thinking of buying gold and silver, we’ve updated and extended a previous article of ours with the answers to many common questions we get. 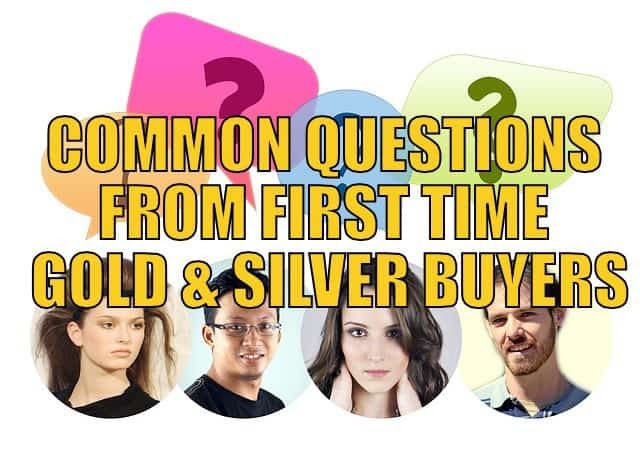 Just a few of the questions covered include:

So we’d highly recommend you check that out if you’re pretty new.

US Interest Rates – Will They or Won’t They?

It seems all eyes are waiting on the US Federal Reserve announcement tomorrow. Yet another will they or won’t they on raising interest rates. This has been going on for well over a year now, but unfortunately that is the world we live in. A world where everyone waits on the word of the “wise few” to decide the price of money.

We still reckon they won’t change them. But who knows? We’ve read some good arguments as to why the Fed might shock everyone with a rate rise, cause a crash in stocks and give themselves room (and an excuse) to cut again soon.

This seems to be what is holding gold and silver in the ranges they have been in too.

Gold and Silver in NZ Dollars This Week

NZD Gold has been holding just above NZ$1750 all week. So far at least it hasn’t really pulled back much from the recent highs. 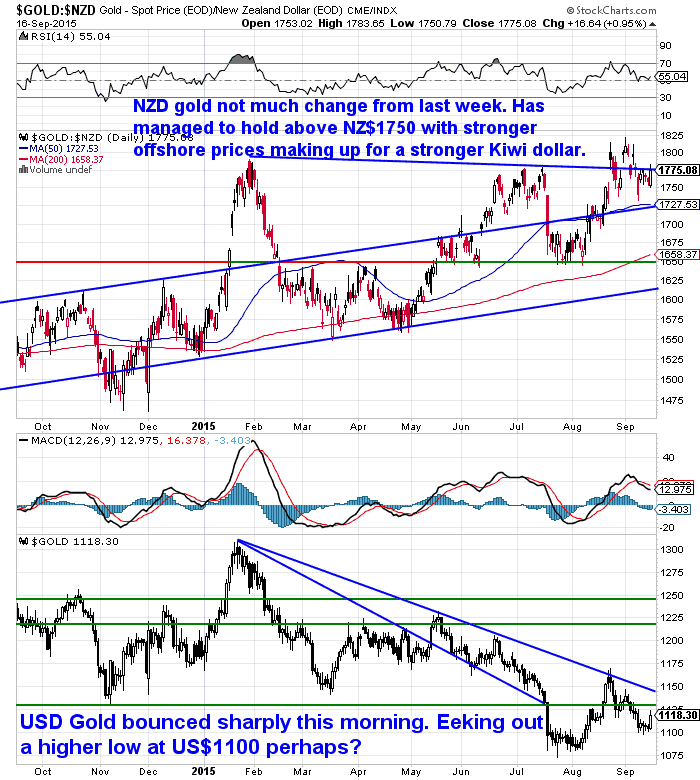 Silver remains in an even more compressed trading range. This morning it again bumped up against the overhead resistance line in this wedge formation it has been in for many months now.

So odds are that the Fed announcement tomorrow could well break it out of this pattern. 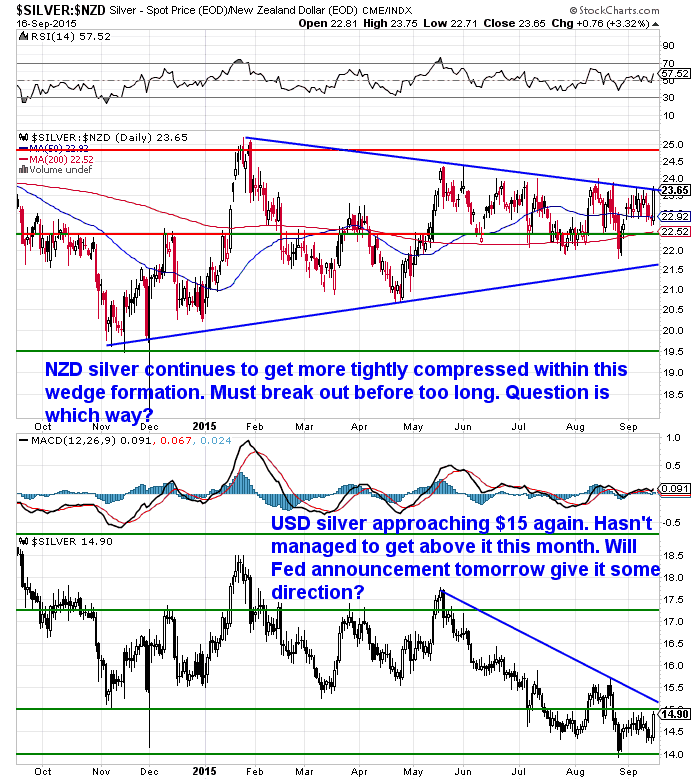 Meanwhile the Kiwi Dollar has edged higher this week but not much higher off the multi year lows of last week. 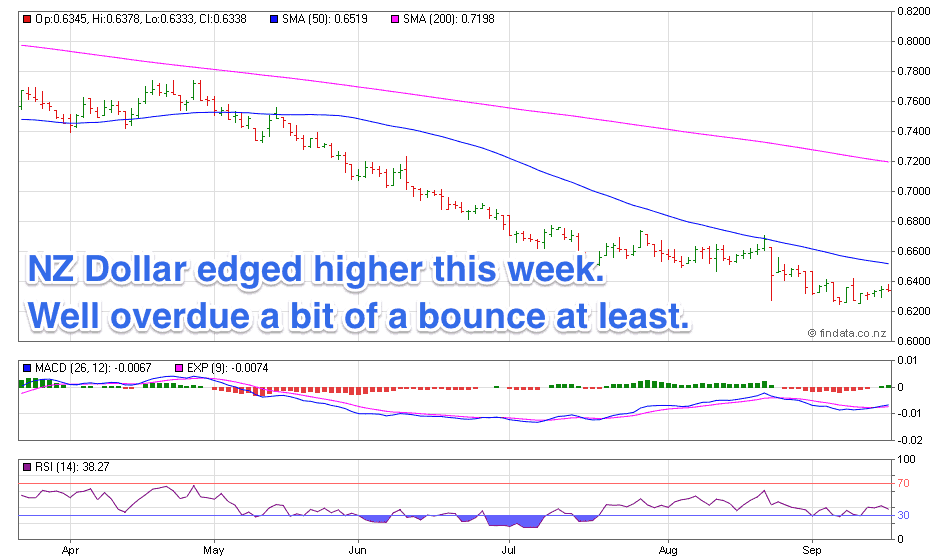 This article from last Friday outlines how gold mining shares are set up to have a big move tomorrow also.  And why the odds favour this being a rally higher.

So we sit and wait until tomorrow to see in which direction the metals move.

How the China Slowdown Will Impact NZ

Last week we discussed the possible impacts of China importing less from Australia and also how this might affect NZ.

We were reminded of something we posted back in 2012. An interview with Satyajit Das where he commented on how NZ might fare compared to Australia in a China slowdown.

Das is worth listening to. A very clear to the point style of speaking devoid of hype or fluff.
So far things for Australia and NZ seems to be playing out much as he expected.

Rod Oram in the Sunday Star Times had quite a good run down of the troubles facing China and by proxy New Zealand.

“…the outlook crucially depends on China. If its problems deepen and its growth slows further, then things gets tougher for the global economy. We are not immune.

The caveat is wise. The Reserve Bank and most other economists around the world have consistently under-estimated China’s challenges. As a result, our growth, trade and inflation have all under-performed the Reserve Bank’s forecasts over the past couple of years.

China is the first or second largest trading partner for more than 100 countries. Yet New Zealand is one of the most vulnerable to a Chinese slow down, according to analysis published by the UK’s Guardian newspaper two weeks ago.

In the first seven months of this year, Chinese imports fell 14.6 per cent. If this continued for a year, we would lose exports equivalent to 1.9 per cent of our GDP.

The common view here and abroad is that China’s growth is slowing because it is making the transition from an investment-driven economy to a consumer-driven one. This is superficially reassuring to us, suggesting that Chinese people will buy even more of the food, drink, tourism and education we sell them.

But what’s going on in China is far more profound. The country is undertaking its biggest, most complicated and difficult strategic shift in its 35 years of modernisation, a senior bank economist told this columnist in an interview in Beijing this week.”
Source.

We hunted out the article Oram referred to in The Guardian (see their Infographic here). Indeed he is right that according to their analysis New Zealand will be the most affected in terms of percentage of GDP. The chart is misleading at first glance as our “circle” is so small but as a percentage of GDP the change is very significant.However as we noted last week China does not make up as large a percentage of total exports for NZ (15%) as they do for Australia (36%).But we were still surprised to see a 14.6% drop in imports in China would have such a big impact on New Zealand’s GDP.We still think the odds of NZ also heading into recession is much higher than most would think. As Rod Oram points out at the start of his article the RBNZ and most other bank economists around the world have underestimated China’s challenges in recent years.That seems to be continuing with NZ GDP rising 0.4% in June quarter from March versus the RBNZ and economists consensus forecast of 0.6% growth.Weaker exports, stronger imports, and transport and warehousing also being the softest since 2009  were blamed.As a result of this the current account deficit also widened.

“A rise in New Zealand’s overseas expenditure combined with a fall in earnings from exports drove an increase in our seasonally adjusted current account deficit, Statistics New Zealand said today.

“The difference between a nation’s savings and its investment. The current account is an important indicator about an economy’s health. It is defined as the sum of the balance of trade (goods and services exports less imports), net income from abroad and net current transfers. A positive current account balance indicates that the nation is a net lender to the rest of the world, while a negative current account balance indicates that it is a net borrower from the rest of the world.”
So in short New Zealand remains a net borrower from the rest of the world. The major weakness in our economy persists and is likely to get wider in coming years.
—– OFFER FROM OUR SISTER COMPANY: Emergency Food NZ —–Preparation also means having basic supplies on hand.
Are you prepared for when the shelves are bare?

We saw this over the weekend and wondered what impact it will have on NZ? 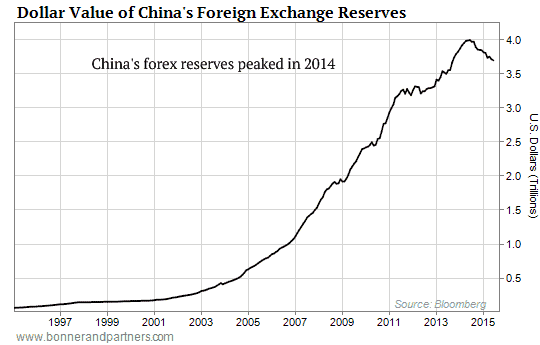 As Bill explained, China amasses forex reserves by exporting goods and receiving foreign currency as payment.[ GSG NOTE: Bill Bonner that is who said: “So you could track much of the global growth binge by looking at China’s foreign exchange reserves. As they went up, more and more money flowed back into U.S. financial assets… and Americans borrowed and spent more and more.
But whoa, whoa, whoa! Those foreign exchange reserves have now peaked.”And as you can see above, last year, these reserves peaked at a dollar value of $4 trillion.That’s roughly the same amount as the Fed spent buying U.S. government-backed bonds under its three QE programs.Now that trend is going into reverse…China is switching from an export-led growth model to a domestic consumption-based model.

As its exports shrink, less foreign currency is flowing into the country to pay for exports…

…and that means less forex reserves being recycled into financial assets outside of China.”
Source.

So the upshot of this is the rest of the world is feeling the effects. New Zealand has not, and likely will not, be immune to this reduced flow of currency.

Will it mean less money from China finding its way here? How will that affect the property market?

Points to ponder we think. 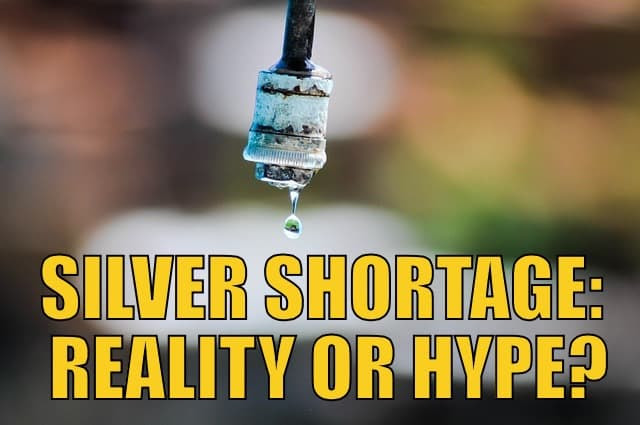 We’ve seen quite a number of articles on the interwebs this week about silver shortages. We’ve posted a short video from Mike Maloney on the topic and then given our thoughts on the matter. There is a lot of “opinion” on this topic floating around. So we’ve tried to navigate some middle ground in our thoughts.

But one thing that is not in doubt is that demand is pretty high and supplies of many popular products are low or even not available. This seems to now be feeding through to causing delays in other products.

So get in touch if you’d like a quote, but bear in mind that for silver you may be waiting longer than usual for delivery. However for an extra $27 a kilo, you can get Swiss PAMP silver available now. Also there is better pricing available for orders of $50,000 or more.