Last week we mentioned how “the “Money Managers” category in gold futures are more bearish in their bets than at any time in 10 years before the last weeks drop to new 6 year lows.”

“Historically these “money managers” are generally wrong at the extremes. This is certainly an extreme. We think the odds favour a broad bottoming in precious metals is underway. US Dollar prices may still head lower from here, but the fact that the mining indexes haven’t hit new lows is a positive.”

Below you can see this visually with the mining index GDX plotted against the USD price of gold (turquoise line): 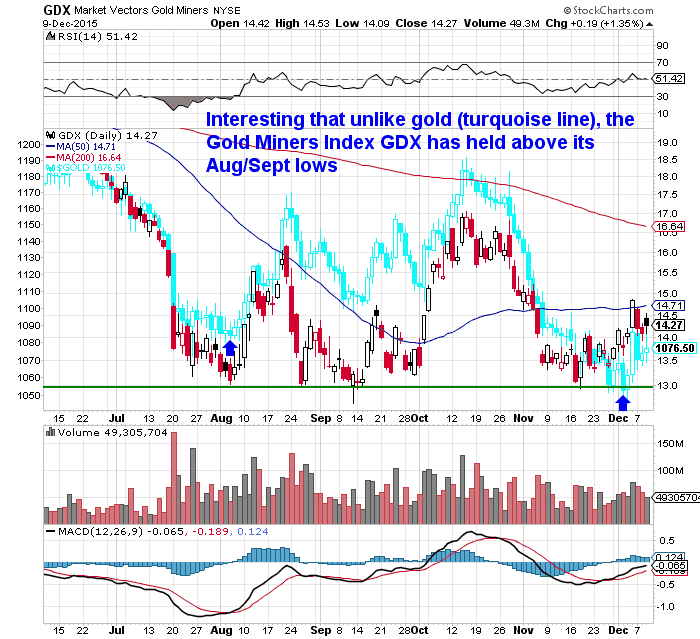 This extreme set-up did indeed set off a short covering rally Friday US time. You can see that quite clearly in the chart below. With gold in NZ Dollars (top half) and gold in US Dollars (bottom half) jumping up sharply.

Since then NZD gold has moved back down care of the Kiwi dollar strengthening this morning. That looks to have come about after the RBNZ cut interest rates by 0.25% but seemed to say “that would be it” for interest rate cuts. We’ll come back to that later if we get time. 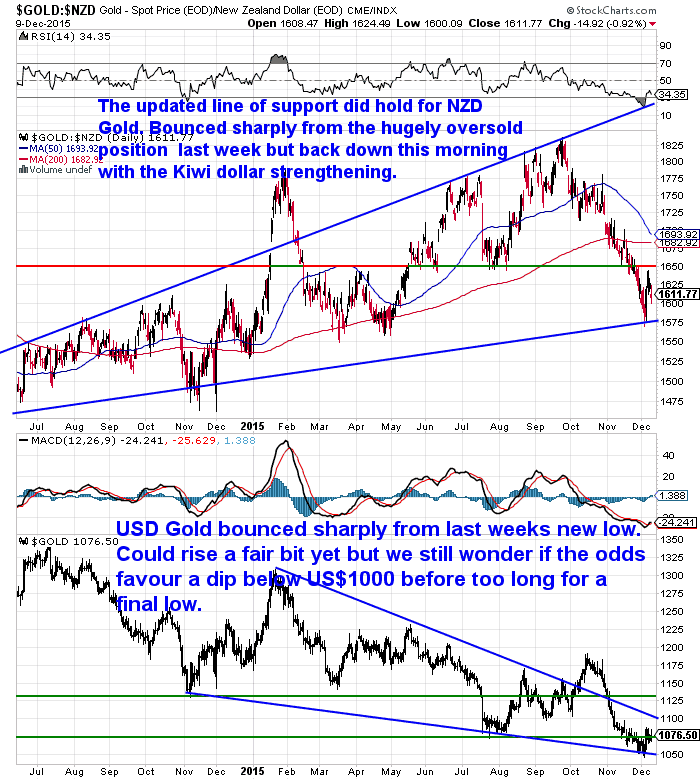 This looks like a pretty good buying zone for NZD gold now that it has pulled back sharply from the September highs. But it still remains in this bullish rising wedge pattern.

Silver in NZ Dollars looks to be trying to make a bottom around the NZ$21 mark, which is only $1 above last years low (excluding the big intraday downward spike on the last day of the year). So again odds favour this being a pretty good buying zone. The fact that hardly anyone is buying is another good sign in our book. 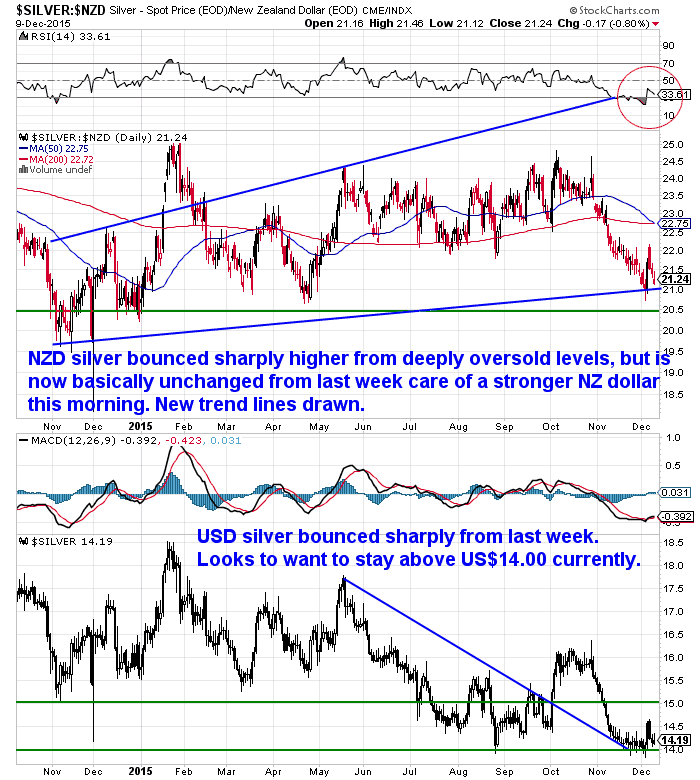 As noted already the NZ Dollar jumped higher this morning on the back of the RBNZ rate cut announcement. 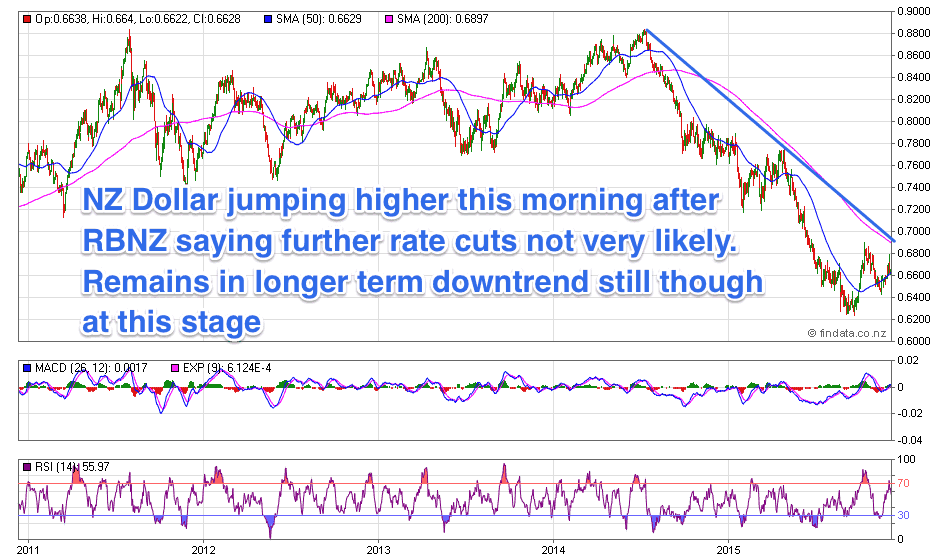 The RBNZ statement finished up with:

“Monetary policy needs to be accommodative to help ensure that future average inflation settles near the middle of the target range.  We expect to achieve this at current interest rate settings, although the Bank will reduce rates if circumstances warrant.  We will continue to watch closely the emerging flow of economic data.”

So that seems to indicate further rate cuts are unlikely.

We find ourselves in a bit of a quandary about local interest rates.

On the one hand we have the likes of ASB economists thinking the RBNZ will be forced to cut by 0.5% next year as they believe the “risks to the RBNZ’s inflation forecasts are all clearly skewed to the downside (in our opinion), leaving it little wriggle room.”

We also think the RBNZ’s forecasts a perhaps a tad too glass half fullish giving what is going on elsewhere in the world.

However we still have a suspicion that at some stage when everyone thinks inflation will remain low forever, we’ll instead see a spike in the other direction take most by surprise. Although perhaps that isn’t right around the corner just yet.

Greg Canavan in the Daily Reckoning Australia takes a similar view in discussing the European Central Bank’s money printing policy which they are pursuing in order to get inflation levels up:

“…the ECB will continue to expand its balance sheet until it gets the inflation it wants. The problem here is that inflation doesn’t behave according to the wishes of central bankers. It lays dormant for years…then takes off.

Maybe that’s what gold and silver got a whiff of on Friday? The coming inflation…”

And when you look at these they do seem to be telling a different story. US 10 Year Treasury bond rates bottomed out in January just below 1.70% and are now 2.22%. That may not look like much by it is over a 30% change relative to where they were.

The same occurred here. With 10 year NZ government bond rates looking like they bottomed at the start of the year, as you can see in the chart below from Bloomberg (hard to read but the months are at the top). They have just slowly headed higher since then even while the RBNZ has continued to cut interest rates.

So we think expect long term interest rates to rise in comparison to short term rates, which central banks – including ours – will try and keep low for as long as possible.

Or put another way we are likely experiencing the exact opposite of 1981.

Also factor in that according to the NIA we:

Primary dealer inventories of corporate bonds are currently at dangerously low levels of $8.5 billion compared to the trailing 36-month median of $17.6 billion. At the end of October, corporate bond inventories briefly plunged to a record low of $454 million, down 97.42% from normal levels.”

And we are also seeing issues in many other government bond markets as outlined by Greg Canavan:

“…is the global bond market bubble at risk of blowing up? There’s significant commentary and worry about stock markets, but not much about the risks brewing in bonds.

–Consider these worrying statistics, from the Telegraph in the UK:

‘As of late November, roughly $6 trillion of government debt was trading at negative interest rates, led by the Swiss two-year bond at -1.046pc. The German two-year Bund is at -0.4pc.

‘The Germans and Czechs are negative all the way out to six years, the Dutch to five, the French to four and the Irish to three. Bank of America says $17 trillion of bonds are trading at yields below 1pc, including most of the Japanese sovereign debt market.’

–It’s fair to say this is unprecedented in financial history. If central bankers get their wish and inflation starts to pick up, there will be billions of dollars of losses in the bond market.–That because when yields fall, prices rise. And when yields rise, prices fall.”
—– OFFER FROM OUR SISTER COMPANY: Emergency Food NZ —–
Preparation also means having basic supplies on hand.
Are you prepared for when the shelves are bare?

Another sign of possible capitulation in gold is the now record low holdings in the SPDR Gold Trust (GLD) exchange traded fund.

This is where the institutional investors and fund managers mostly choose to hold gold. Last week saw the largest 1-day drop in GLD holdings since the the April 2013 crash –  likely a sign of capitulation.

China has obviously been paying attention to the lower gold price and taking advantage. As according to Bloomberg they added the most gold in November in 5 Months as the price slumped.

If you’d like to do the same then get in touch. Perhaps you’ve got a question we can answer like this one from a prospective buyer this week…

Q.  The largest risk I see is the time between paying for the Gold/ Silver and receiving the delivery – I do not recall seeing any info on this?

Here’s the answer from our FAQ page:

Once I’ve accepted a quote for gold/silver and paid my money, how can I be sure I will receive it and that you guys aren’t a dodgy ‘Nigerian scam’?

First up, we don’t receive any money directly from you. We are brokers or agents only. You deposit the funds directly into the specific suppliers account (depending on what product you want and where the best price is) and they deliver the precious metals to you or supply them for you to pick up. We get a finders fee paid from them later (Note: This is taken out of their margin not added onto the total so it costs you no more to use our services).

You are able to contact them to confirm our relationship with them and that the bank account we supplied you is correct.

So then the chief concern to you would be, will the supplier deliver? The main suppliers we use have been in business for over 30 years supplying precious metals to private investors but also to Jewelers in NZ. So the short answer is that were they not to deliver (i.e. rip someone off) their reputation would be shot and effectively their business would be over. They are family owned and run businesses, conservative by nature and have been around for over 30 years.

From a legal perspective – once you accept, you are issued with a sales order and that is a legal contract. You are required to pay $xx and they are required to supply xx oz’s of gold.

Also another important factor is that the manufacturers hedge themselves at the close of every business day so they have sufficient funds to cover all outstanding orders on a given day.  They have never had a failure to fulfil an order, as described above they would be out of business if they did.

Survival Gift Ideas for Your Loved Ones

Having trouble deciding what to give the man or woman who has everything this Christmas? This home diversion book safe looks just like a real dictionary.
Place it on a book shelf and it will blend right in with the rest of your books.

Hide valuables and important documents like wills and passports
where thieves won’t think to look.