A decent correction has finally arrived this week
Gold in NZ Dollars is down over 2% from a week ago. A further drop wouldn’t be a surprise for gold as it has risen so sharply this year. Perhaps look for it to touch the 50 day moving average (MA) at $1790 yet? 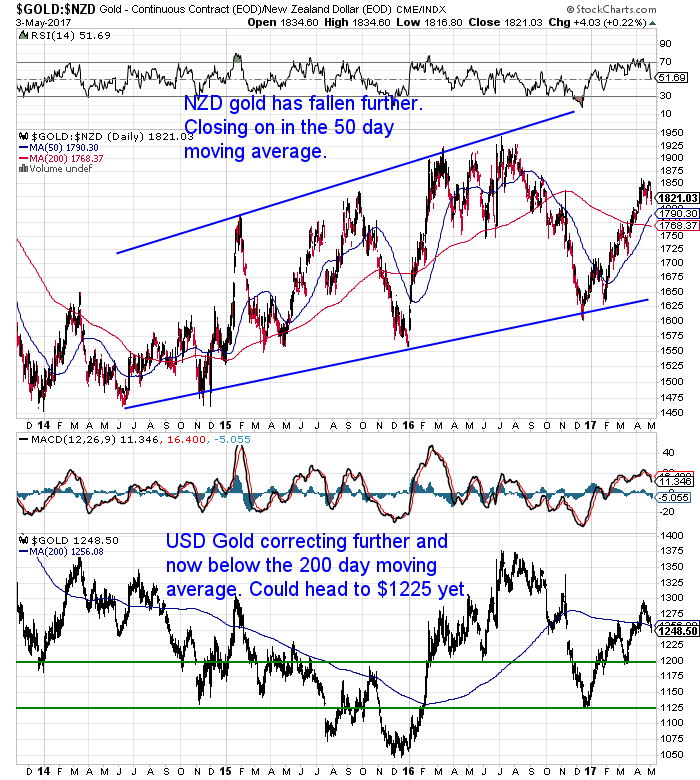 Silver really plunged lower. Down over 5% the past 7 days. But unlike gold silver is very oversold now and also close to the March lows in NZ dollar terms.
So we’d guess that silver is due to bounce higher from here. Of if it doesn’t then look for support to come in at around $23.70 where the rising blue trend line is. Could it go even lower? Never say never.
But overall this looks like a really good buying zone to be adding physical silver to your existing hoard. Or to be starting one if you don’t have any.
Silver has been rising for the past 2 years and now is a chance to buy with it again close to the rising trend line. Something that may only happen once or twice a year. 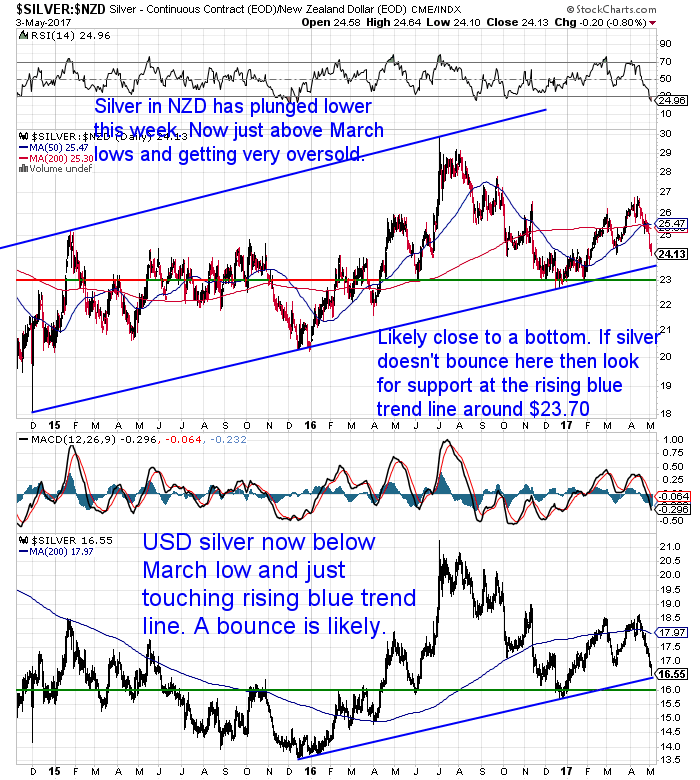 The Kiwi Dollar dipped lower then bounced sharply higher during the week. But has now moved back down even below the low of a week ago. But does look to have support at around .6850.

Stewart Thomson echoes our thoughts on silver being in an excellent accumulation zone in this article: 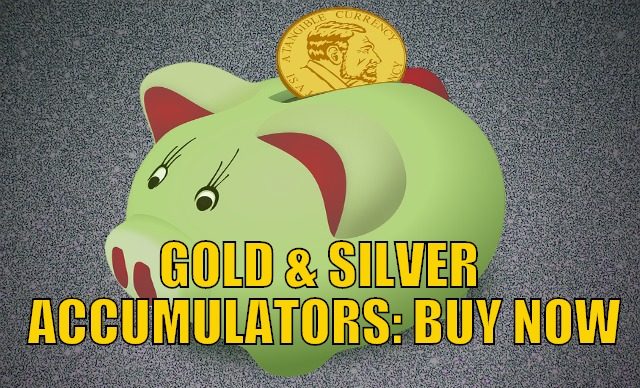 Back in early March we wrote an article, Wages from Ancient Greece and NZ Housing Both Say Silver Undervalued by a Factor of 20.
This demonstrated how very undervalued silver is currently by looking at what labourers were paid in silver in ancient Greece, and also the value of New Zealand houses when measured in silver. The resulting numbers were eerily similar.
Here’s another historical comparison this time looking at gold.
In the early 1930s the settlement between King Ibn Saud of Saudi Arabia and a consortium of oil companies on rights to that country’s vast oil riches, involved payment of 35,000 British gold sovereigns – roughly one-quarter ounce gold coins.
We can compare this valuation from the 1930’s to today:

“At the time of Saudi Arabia’s oil concession, British sovereigns were valued at $8.24 each, or $288,365 for the 35,000 coin lot. The price of oil in 1933 was about 85¢ a barrel. A British sovereign, as a result, could buy 9.7 barrels of oil. Today those same sovereigns would bring a little less than $10.5 million at melt value ($298 each/$1265 per ounce gold price) and a barrel of oil is selling for about $52. Thus, today a British sovereign can buy a little less than six barrels of oil — a statistic that gives you an inkling of gold’s current under-valuation. For gold to buy the same amount of oil now that it did in 1933, the price would have to go to $2150 per ounce. It may be no coincidence, and it certainly reinforces the notion of gross undervaluation, that the inflation-adjusted price of gold in 1980, when gold traded at $850, would be in the vicinity of $2400 today. (Please see chart below courtesy of goldchartsrus.com)” 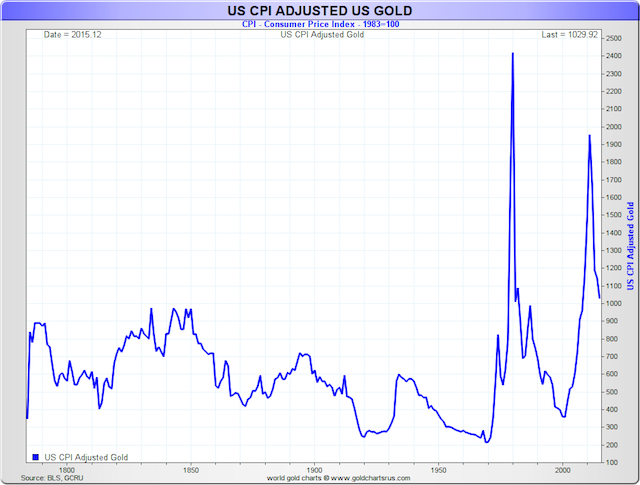 Michael J. Kosares at USAGold commented this week that:
“…global demand for the physical metal [gold] has not only sustained itself in recent years, it has grown rapidly, and clearly at a rate that far exceeds the rate of growth in mine production. Just this past week, we have seen reports of renewed strong demand in China and India – two traditional powerhouses when it comes to physical ownership of the precious metals. Generally speaking, the East buys on price while the West buys on momentum, thus one might conclude that anecdotal evidence shows that the price has been “right” in recent months. This time around, as reported here previously, professional money managers have positioned themselves as buyers in concert with the East, something that happens only on occasion. The two together though are currently an imposing presence the global gold marketplace.”
But this increased demand from China (plus India lately) and professional money managers is in stark contrast to what is going on at a retail level in the bullion market in North America.
The very affable Ronni Stoeferle this week reported on the lack of demand in the retail market according to bullion dealers at a conference he spoke at recently.
So in this week’s feature article we look at what is going on in the retail bullion market here in New Zealand.
You’ll see how retail gold investors have been behaving quite differently to big money investors. You’ll also discover how this compares to what’s happening in the New Zealand bullion market. Plus what the current headwinds and tailwinds for gold are. 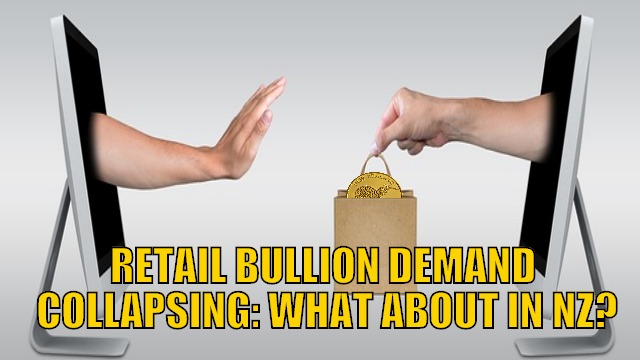 Insure Your Wealth Against the Fake Valuations!

Here’s some thoughts to finish from Gijsbert Groenewegen of Silver Arrow Partners which echo our own thoughts on gold and silver as wealth insurance:
“I think… that investors would do well to shift their focus more and more from the flakey intangible assets to the tangible assets such gold and silver, agricultural land and non contaminated fresh water. Next to that investing in the stock and bond markets is already for a long time not based on fundamentals. Everything is fake; the valuations of stocks, bonds and currencies are completely distorted by QEs, ZIRP and NIRP, actions of the Plunge Protection Team and the HFTs with their algos. So explain to me how an investor can invest on the basis of real fundamentals and is not taken for a ride as we are witnessing for example with the GDX and GDXJ. We live in a fake society whereby fake is ruling our reality! Anyway why buy insurance for your house, your car, and your life but not for your wealth? Why not put 10%-15% of your wealth in physical gold and silver and the gold and silver mining companies if you want to hedge your investments in your house and investments. If everything goes well all your assets will do well whilst if things turn sour gold and silver could give that nice leveraged hedge if you have the physical. When it happens people will wake up and realize that physical gold and silver are money the only real money the only reality and that everything with paper is just paper, worth hardly anything, fake!”

Silver in particular looks like being cheap wealth insurance right at the moment. Get in touch if you have any queries or would like a quote.
— Prepared for Power Cuts? —
[BACK IN STOCK] New & Improved Inflatable Solar Air Lantern