Big moves this week with US Dollar gold up 3.39% (see bottom half of the below chart), but with the NZ Dollar also bouncing up 2.66% this has negated most of the move higher for Gold in NZ Dollar terms.

However NZD gold has managed to move up after falling for the past couple of weeks and has possibly made another higher low around $1725. The price remains within the rising trend channel lines we drew in last week. 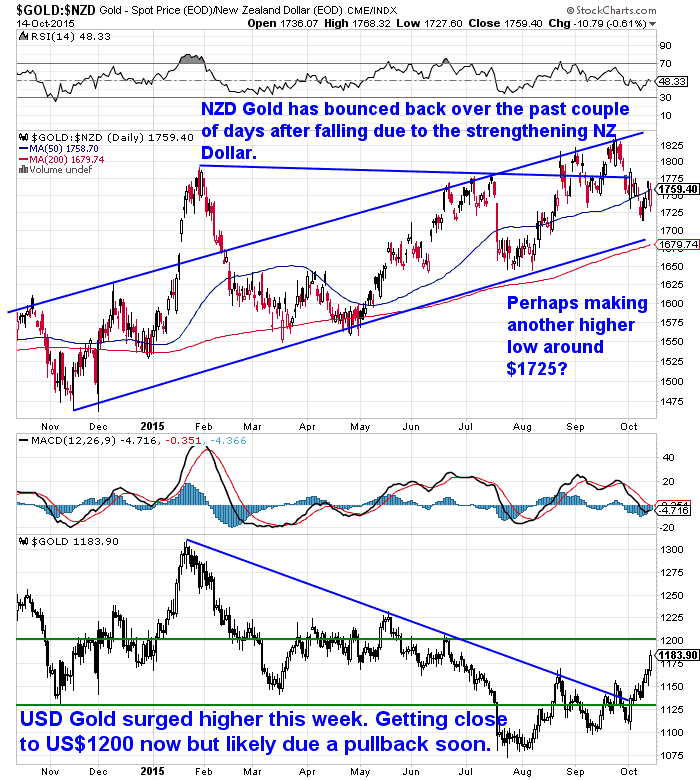 NZD silver meanwhile has been consolidating around the NZ$24 mark. Sitting in the middle of the rising trend channel lines and just above the 50 day moving average. 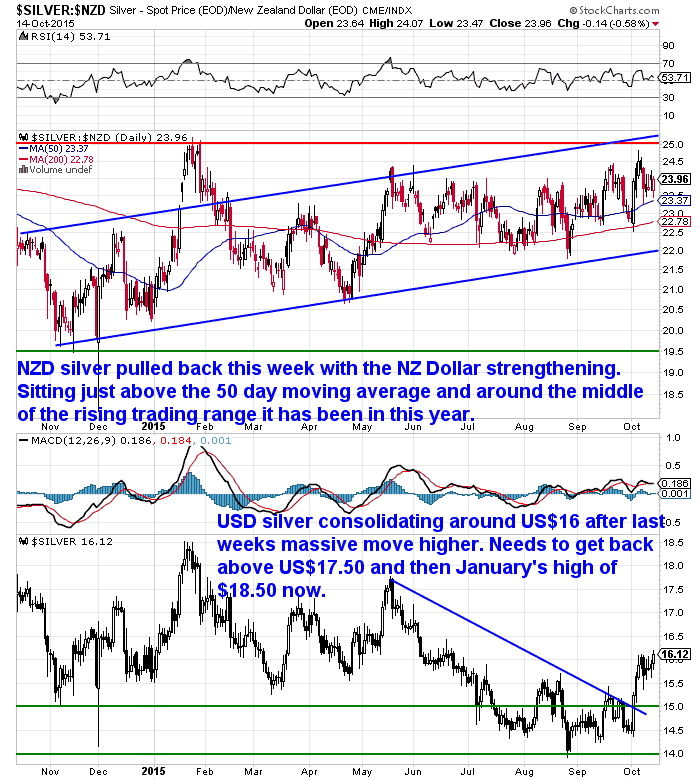 As already noted the NZ Dollar continued its sharp move higher over the past week. It is looking very overbought on the RSI indicator now and is likely due a pull back.

So is this a change in trend or just a bounce from very oversold levels?

The price remains well below the 200 day moving average (pink line) and the downtrend line of the past year so has a ways to go yet before we can call the trend up. 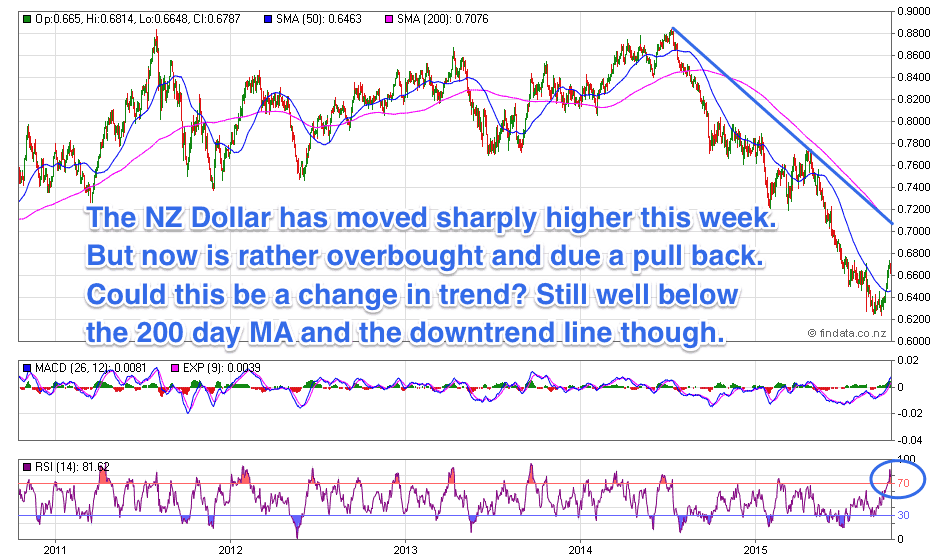 Foreign exchange dealer HiFX’s director of sales Dan Bell thinks the NZ Dollar will weaken over the next 6-12 months as NZ and Australia are both playing catch up with the rest of the world in terms of lower interest rates. 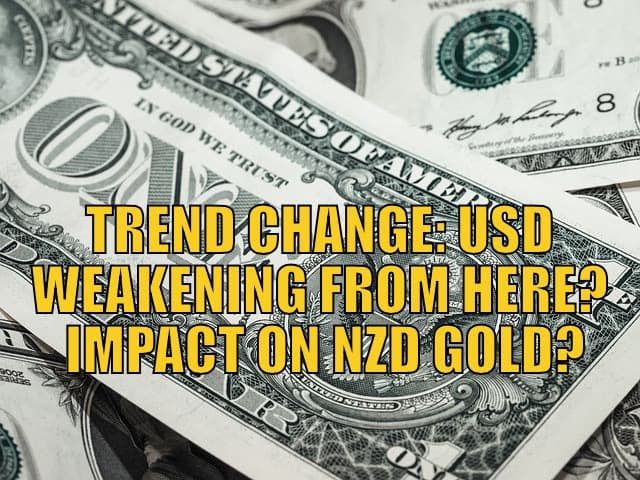 However this week we had a look at the US Dollar index and wonder if in fact we might have seen a trend change, with the US Dollar strength of the past 18 months or so possibly ending?

So in this weeks feature article we take a guess (the key word being guess) at what the USD Index, the NZ Dollar and NZ gold prices might do from here.

Yet again this week we’ve read more articles pushing the “negative interest rates are a good idea” barrow. Seems there is no escaping talk of this at the moment.

“I don’t see raising the target range for the fed funds rate above its current low level in 2015 or 2016 as being consistent with the pursuit of the kind of labor market outcomes that we are charged with delivering,” Kocherlakota said Thursday in remarks prepared for a speech in Mankato, Minnesota. “Indeed, I would be open to the possibility of reducing the fed funds target funds range even further, as a way of producing better labor market outcomes.”
Source.

Last week we commented that we thought negative interest rates may not have the desired impact of encouraging consumers to spend. But rather people might be more careful with their money and actually save.

Well, this week we came across an article with some back up for our theory.

Lee Adler from the Wall Street Examiner and David Stockman’s Contra Corner has some excellent reasoning on why negative interest rates won’t have the desired effect. He uses their impact in Europe as evidence of the likely end result.

Because there are two sides to a bank balance sheet, negative interest rates are the mirror image of positive rates. The move to negative rates imposes new costs on the banks, unlike lowering positive rates or ZIRP which reduce bank costs.

So the banks in Europe did exactly what I said they would do in mid 2014 when the ECB announced negative deposit rates. It’s exactly what any person with common sense would do, and therefore knew the banks would do. Those with the ability to do so pay off loans, which extinguishes deposits, thereby getting rid of the added cost. As opposed to stimulating growth, the European banking system shrinks. As opposed to encouraging borrowing and spending and economic growth, the policy encouraged deleveraging.”

Makes sense, negative interest rates encourage banks to pay off (i.e. remove) the excess reserves they hold with the central bank. So hence deleveraging is the result.However even though they likely won’t have the desired effect, to us at least, the way the topic is being floated, it looks like negative interest rates are on the horizon in perhaps the UK and USA.

What would that mean for NZ?

Well lower rates than currently at the very least, as we generally follow the rest of the developed world’s lead. Money Printing or Tax and Spend (or Both)?

The other “meme” that seems to be appearing now is the idea that QE hasn’t worked so lets try tax and spend instead.

The golden age of central banks is at an end – is it time for tax and spend?

“The IMF appears fixed on interest rates and QE to boost the global economy but just as homeowners take on larger mortgages when rates are low, governments can also sustain higher deficits”

Zerohedge noted this week that a Bank of America analyst believes we might be seeing a switch in monetary policies between East and West.

That is, the likes of the UK, US and Japan might soon instigate stimulus programs of infrastructure spending and the like because as the Guardian article above argues “QE hasn’t worked”.

While the likes of China may switch from stimulus to QE.

It is hard to escape the feeling that in the coming months  there will be more central planner intervention ahead the world over rather than less.

Olivier Blanchard, who has just stepped down as chief economist of the International Monetary Fund backs ‘people’s QE’

“Blanchard said that this does not mean central banks would buy goods directly. Rather, governments can increase their fiscal deficits by spending on infrastructure projects. Central banks can then buy this debt with newly created money.”

So maybe we will see a combination of more money printing but this will be use to fund infrastructure programs. Then perhaps just when everyone least expects it we will see inflation arise?

We find it hard to disagree with Jim Rickards latest forecast for 2016. It fits in with much of what we’ve been discussing lately from a variety of other sources too. Here’s an excerpt care of the Daily Reckoning:

“The economy will remain weak. We’re probably heading into a global recession in 2016 and the U.S. economy is certainly not immune from the effects of that. The Fed will continue to talk tough about raising interest rates based on their flawed models. This tough talk will keep the dollar strong, which just makes the Fed’s problems worse. A strong dollar turns the U.S. into a sponge for all of the deflation in the world.

This counterproductive combination of weak data and tough talk will continue for a few more months. Eventually even the Fed will see the light. By early 2016, we expect the Fed to throw in the towel on rate hikes and begin to talk about easing. This will probably take the form of reinstating forward guidance in FOMC policy statements.

Forward guidance was abandoned in March 2015 when the Fed removed the word “patient” from their statements. They can put the word “patient” back in, or maybe an equally evocative synonym like “forbearing.” The exact word doesn’t matter. Fed insiders will call The Wall Street Journal, explain what they mean, and the Journal will tell the world what to think. The important thing is that the Fed will have blinked.

After that we’ll be into election season and the Fed will probably be on hold until December 2016 to avoid getting caught in the political crossfire. If the Fed’s easing moves in mid-2016 produce stronger growth and some inflation, perhaps we’ll see a rate increase in late 2016 after the election. Still, if the global recession is worse than expected, even late 2016 may be too soon for rate hike.

The time to raise rates was 2010 or 2011 when the weak dollar was giving the U.S. economy a tailwind. The Fed blundered by not raising rates then. If they had, they’d be in a position to cut them now when the economy could use a lift. Two wrongs don’t make a right. The 2010 blunder is no reason to raise rates now.

The Fed’s next move will be to ease.”

To finish we’ll share a brief excerpt from The 10th Man, Jared Dillian on a possible surprise.

“The Bank of Japan is likely to quantitatively ease again, now that the Fed is not hiking. Now the Bank of England might not raise rates until 2017. Suddenly, we are once again in a world awash with liquidity. Gold is up quite a bit, and silver up even more (disclosure: I am long both gold and silver in a variety of forms, including GLD and SLV).

Wouldn’t it be interesting if we got a big precious metals rally? That would blow apart consensus thinking.

The dominant investment thesis is that a stronger dollar will murder emerging markets. What if that turns out not to be true? What if the dollar doesn’t strengthen, or all currencies weaken equally (relative to hard assets)?”

His point “What if the dollar doesn’t strengthen, or all currencies weaken equally (relative to hard assets)?” ties in nicely with our overall conclusion in this weeks feature article. So don’t forget to scroll down and check that out too along with a couple of China focused items on the site.

Gold and silver in NZ Dollars continue to edge steadily higher but are still a long way from previous highs, so if you’re yet to buy you certainly haven’t missed the boat yet.

Todays price for 500 x 1oz Canadian Silver Maples coins is $14,973 including shipping and insurance, and delivery is now about 4 weeks away.