After flirting with new highs this month, both gold and silver have pulled back sharply this week.

NZD gold is down about $50 from last week. We need to watch $1800 and $1775 levels now as the next possible support. Given gold is now getting close to oversold levels it would make sense to see it bounce from one of those 2 zones. 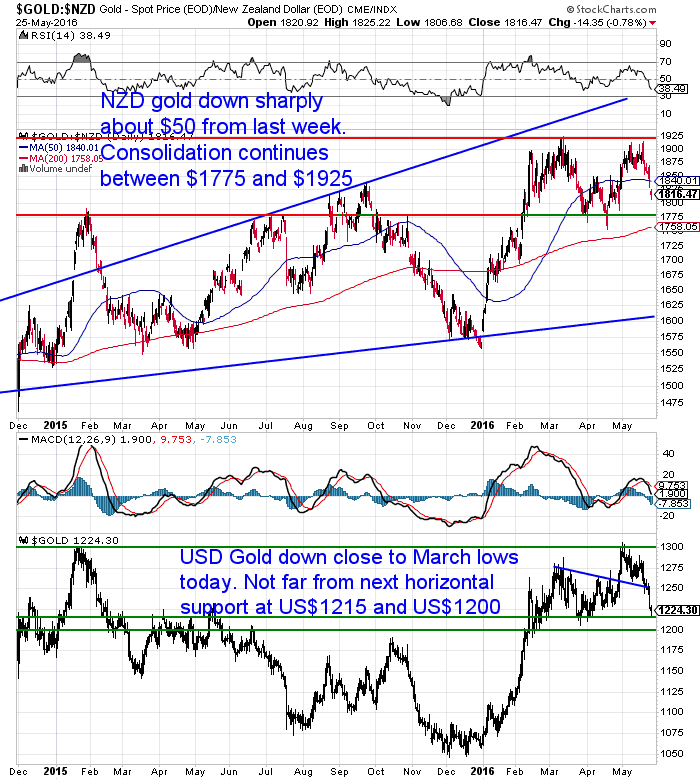 Silver fell even more than gol dropping 3.5%. However it has bounced back a little today after touching the 50 day moving average. It is also close to the next horizontal support at $24. After making new highs above $25, perhaps we will see it consolidate between $24 and $26 for a bit now? 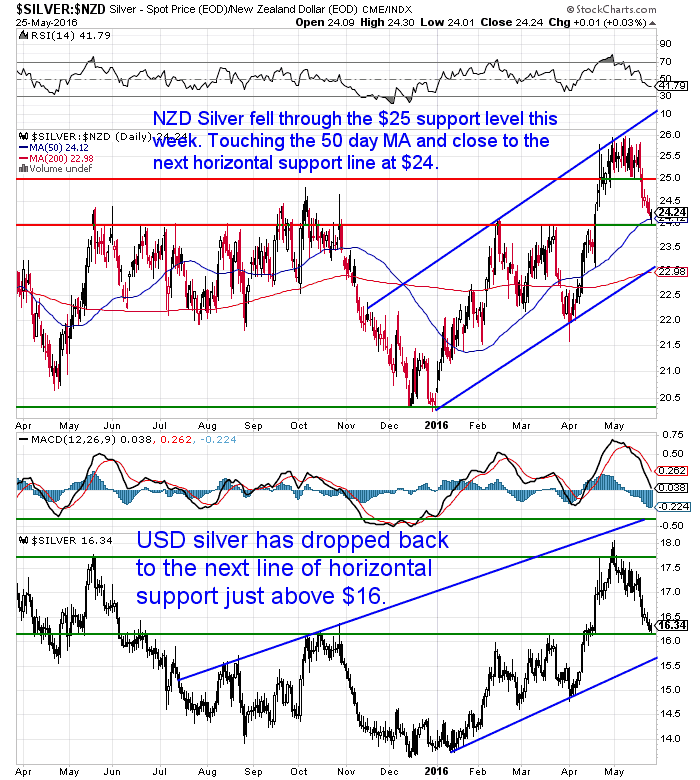 The Gold Silver ratio bounced back earlier this past week after plunging below 80. But it has headed lower again the past 3 days.

After breaking below the rising blue trend line it didn’t manage to get back above it.  So odds favour the “head and shoulders” pattern is playing out, and that suggests an eventual return to the 45 level. This would mean much higher prices for silver in comparison to gold. 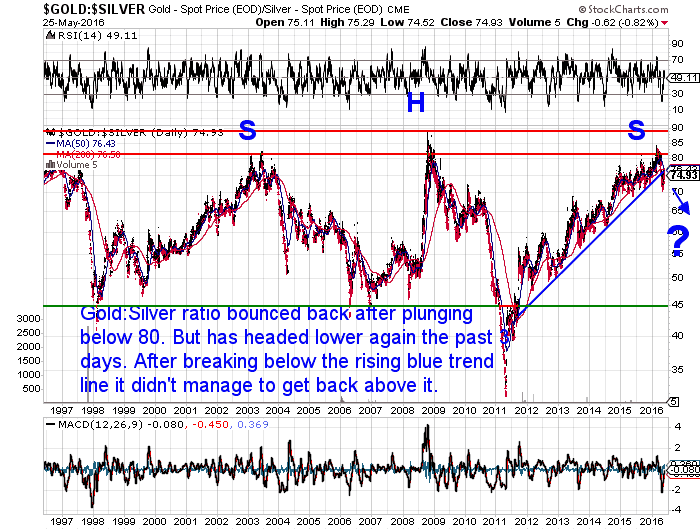 The New Zealand Dollar is unchanged having gone sideways from a week ago. It is sitting just above the 200 day moving average. 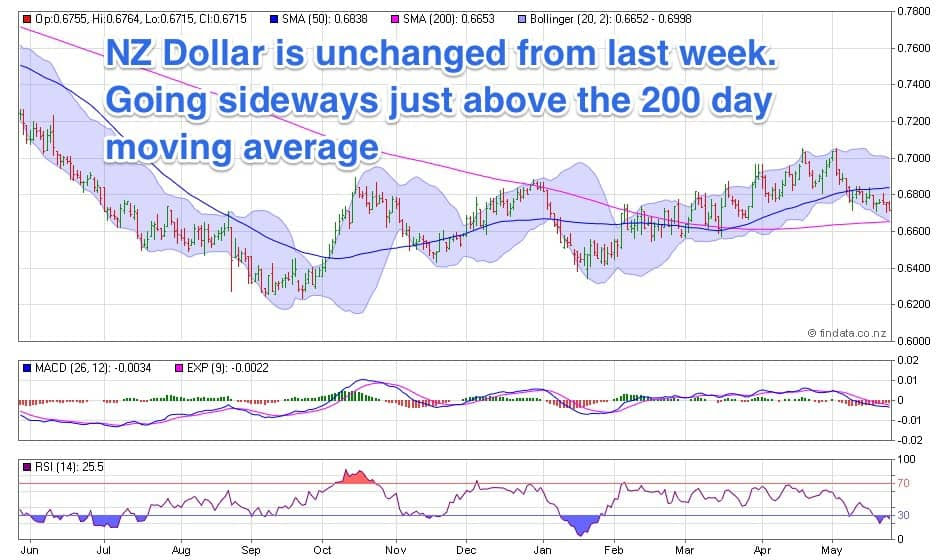 We’ve seen it reported multiple times that the loud whispers out of some of the US Federal Reserve board members that a rate hike is well on the cards in June, is what dented gold. We’d say it was just due a breather.

However this rate hike doesn’t even seem so likely according to some deductive reasoning from Jim Rickards:

“Here are some important factors that still weigh in favor of no rate hike in June:
Regional reserve bank presidents are outspoken, but they’re not in control. The inner core of Yellen, Fischer and Dudley still runs the show (now joined by Lael Brainard, because of her thought leadership on international linkages). None of them has said a hawkish word since December, and Brainard has been a dove since last October. The regional reserve bank presidents just are not that powerful when it comes to policy.The next Fed meeting is June 15, just eight days before the Brexit vote in the U.K. If the Brexit vote goes for “Leave” (right now, the polls are tied between “leave” and “remain”), that’s a financial earthquake.The Fed will not want to trigger a market meltdown (remember January?) with a rate hike right in front of another meltdown over Brexit. The system might collapse. So the Fed will wait.It’s an election year, and Yellen is a staunch Democrat. Recessions in election year favor the out party, in this case Republicans. Yellen does not want to be held responsible for electing Donald Trump. That’s another reason she’ll likely sit tight until December.”

So as is often the case the headline news items are not exactly the best thing to make investment decisions by.

The Prime Minister Has Noticed the Cantillon Effect in Action Too

Last week we outlined why it might not pay to take your advice on gold from the Prime Minister (no real surprise there).

We happened to catch another interview with him this week, where he was answering criticism that the government is not “doing enough” about the housing crisis. Some poll or other said that “76% of people think the government should be doing more”.

He outlined all that they had done to increase supply. And expounded on the number of people who had used Kiwisaver to fund a deposit on their first home.

But the key point which went largely unnoticed was that he ended up saying that house prices are rising across the world in every major capital city. Implying – we guess – that it was a global issue that they could only do so much about.

Unfortunately he wasn’t questioned as to why he thought this simultaneous rise in house prices was occurring across the planet.

But we shared a theory why 2 weeks ago care of Ronni Stoeferle in:

In case you missed it, the Cantillon Effect:

“…describes the fact that newly-created money is distributed neither equally nor simultaneously among the population. This means that people handling money partially benefit from inflation and partially suffer from it. Monetary dispersion is never neutral. Market participants who receive the new money early and exchange it for goods benefit in comparison with those who get the newly-created money later. We can see a transfer of assets from late money users to early money users.

Friedrich von Hayek once pictured the cantillon effect with the process of pouring honey into a saucer. The honey dollops in the middle first and only later it spreads out to the periphery. Prices also do not rise evenly. Typically price levels are higher in regions, which directly or indirectly benefit from monetary inflation. If you happen to live in a financial center you may have noticed.”

As we said back then…

So could this be the cause of the outlandish real estate prices in Auckland?

Is the “honey” now spreading out from Auckland to the likes of Bay of Plenty? Rather than it just being an Auckland housing shortage?

Or maybe there are just coincidental simultaneous housing shortages in just about every financial centre all over the world? Yeah that must be it.

Of course even if he was asked about this, you can’t expect the Prime Minister to explain how central bank and government policies the world over are the cause of rising house prices.

If he did people would wake up and stop turning to the central planners for solutions to the very problems that they cause!

Are the Hedge Funds Betting Record Amounts on Meltdown of Australian Banks and Housing Bubble Right?

Speaking of rising house prices, we’re not too different from our trans-tasman brethren.

However unlike them we don’t have a number of hedge fund managers publicising their bets on a bursting of the Aussie real estate bubble and a subsequent meltdown in Australian Banks. These Hedge Fund managers have placed “shorts” against the Aussie banks i.e. bets that their share prices would fall.

We saw an article on Wolfstreet this week that runs through their thesis.

Of course our banks are virtually all owned by the Aussie banks so indirectly these shorts against their banks are against ours too.

The article makes a very good point though, about how no one really wants house prices to fall. While the share prices of the banks were down they have been rising again of late. So the hedgies might well be betting for all the right reasons but still not be right on the timing:

“No one (outside of the short sellers) wants home prices to go down or these banks to topple. Not the housing industry, the realtors, the home builders. Not the media that depends on advertising dollars from the banks and the housing industry. Not the taxing authorities. In short, all those that feed off this housing bubble. And certainly not the homeowners, who are voters! And therefore, certainly not the government.

Since the resource bust, the health of the Australian economy has become even more dependent on housing, and no economic player wants that bubble to implode or the banks to collapse. It would be a fiasco. They’ll do what they can to keep it going.

And the Reserve Bank of Australia doesn’t want to even think about how to bail out four banks whose assets are over four times the size of the economy. It would rather cut interest rates and come up with all kinds of shenanigans to keep the bubble inflated for as long as possible, and keep the banks upright another day.

That’s what short sellers are up against.

And regulators close their eyes, hoping that this housing bubble doesn’t collapse on top of them, at least not on their watch.”

We’ve read how much money is being pumped into infrastructure projects in Australia and how there is a shortage of builders. So despite the mining bust, while this money flow continues and while unemployment levels remain pretty low, odds are the bubble won’t burst.

We might well be able to say the same thing over here. While migration continues and while unemployment remains low, odds are prices could stay high or rise even further yet too, on the back of record low interest rates.

In short, just because something looks inevitable it doesn’t mean it’s imminent.

In the meantime it pays to have some insurance. Gold isn’t always negatively correlated. Gold and silver may well rise while real estate prices rise too. They did together in the early to mid 2000’s. In the end though our bet remains that a fixed amount of gold will buy a lot more house in the future than it does currently.

Billionaires Are Wrong on Gold

A reminder though to think carefully about the “type” of gold (and silver) you buy. And whether you are buying gold or just “exposure to the gold price”. The following article outlines the important distinctions and how the billionaires like Stanley Druckenmiller might not be taking these into consideration:

Billionaires Are Wrong on Gold

“High net worth individuals and other savvy investors realize that owning gold is one of the best ways to manage systemic risk. However, in this case both Druckenmiller and Paulson have the right idea but the wrong execution.  Instead of acquiring physical bullion stored on an allocated basis, these billionaires chose proxies of gold in the form of ETFs. Their investments in ETFs may ultimately negate the very reason for investing in gold in the first place.  Only physical gold provides true diversification outside of the financial system. Physical gold is immune from counterparty risk or liquidity constraints.  Investing in gold proxies may work under normal conditions for short-term trades and hedging strategies, but will be subject to the same systemic risks that financial assets will incur. The time when you need the protection of gold the most is the time when these proxies are most likely to fail and not provide the portfolio protection of bullion owned directly.”

If you want to buy actual physical gold and silver then get in touch. The current pull back in prices might prove a good opportunity. Check out this cool new survival gadget. This amazing little knife in just seconds transforms from an unassuming card in your wallet into a fully functional knife.The Insta-Knife folds down to the same size as a credit card. And at just 2 mm thin it is 1/10th the thickness of your standard utility knife!FREE Shipping – Shop Now