Gold has launched itself even higher this week. So much for the expected pullback! As we mentioned last week gold does have a habit of surprising, and that’s what it has done. Now at the highest price since September.
Gold remains overbought on the RSI indicator. But it has been flirting with these overbought levels since February. During that time we have had only the one pullback of any note in early March.
So while a correction is inevitable it may not be back to previous lows. Instead we may yet again see a “higher low”. Keep an eye out for the 200 day moving average at $1771 as a possibility. 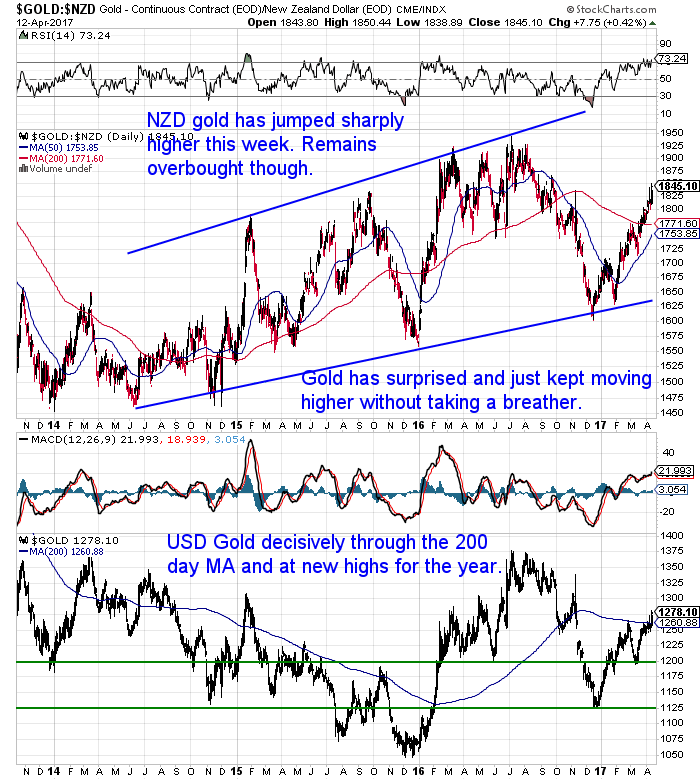 Silver has lagged gold this week, but may be about to play catch up since silver is not overbought like gold is. So we could see silver move higher before any correction. 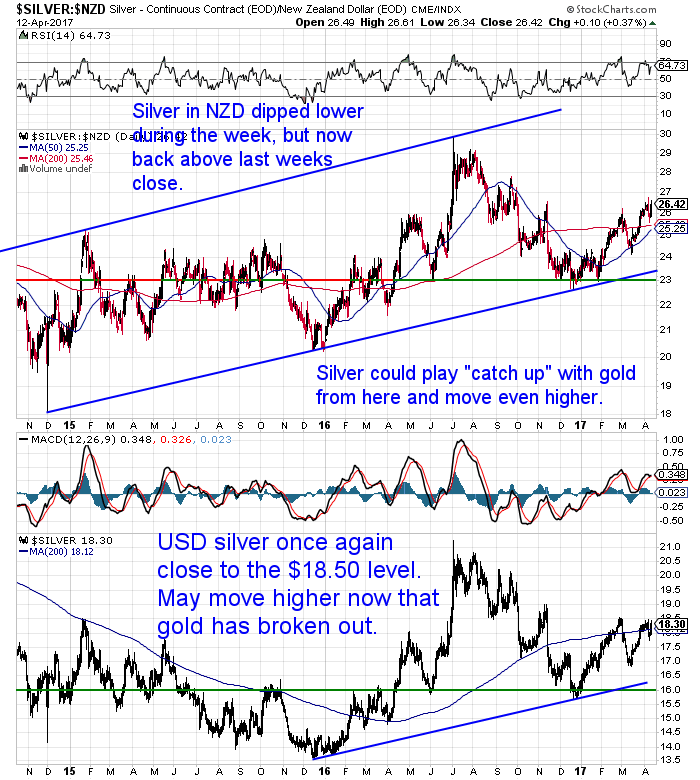 The NZ Dollar remains close to the 0.69 level from last week. It is close to oversold so would be expected to tick higher from here, but with what’s going on geo-politically at the moment we could see the US Dollar remain favoured. 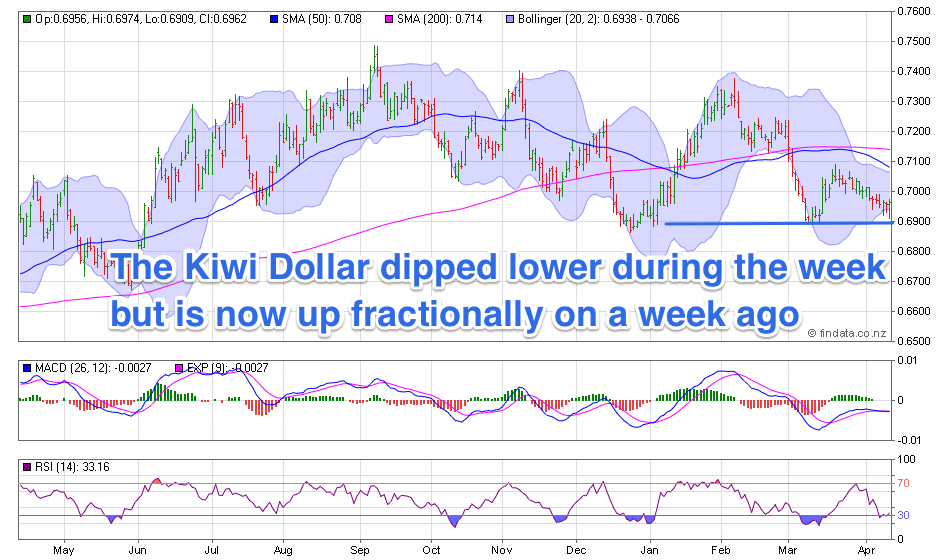 7 Ways to Tell When it’s Time to Sell Gold

In case you missed our email earlier in the week, we’ve had a few reader questions again lately about how to determine when it’s time to sell your gold and silver.
So we’ve put together an update of a previous article from 7 years ago but with updated numbers for 2017.
In this post you’ll discover 7 ways to determine if it is time to sell gold. Some are numerical and some are more anecdotal.

When Will You Know It’s Time to Sell Gold? 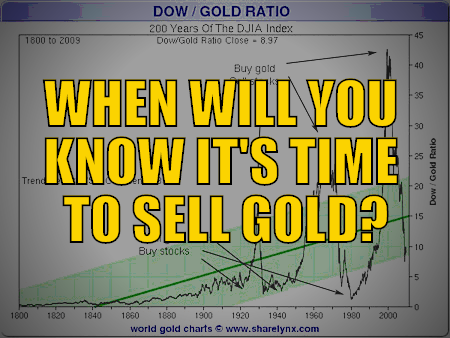 Continues below
—– OFFER FROM OUR SISTER COMPANY: Emergency Food NZ —–
<

One of these 7 ways are real interest rates. Frank Holmes pointed out that:

“London-based consultancy firm Metals Focus emphasized the importance of negative real rates on the price of gold, writing that “real and even nominal rates across several other key currencies, including the euro, should also remain negative for some time.” The European Central Bank’s deposit rate currently stands at negative 0.4%, not including inflation, and Sweden’s Riksbank, the world’s oldest central bank, will continue its negative interest rate policy as it awaits stronger economic growth. Meanwhile, the Bank of Japan left its short-term interest rate unchanged at negative 0.1% at its meeting last month.

This is all beneficial for gold. Discouraged by the idea of negative rates eating into their wealth, many savers might be compelled to invest in gold, which enjoys a reputation as an excellent store of capital.

Based on the near-term outlook for real rates, as well as uncertainty over Brexit, rising populism in Europe and Trump’s trade and foreign policies, Metals Focus analysts see gold testing $1,475 an ounce this year.”

A reminder that “real interest rates” simply means taking inflation into account.
Inflation rates have been ticking higher in many places of late.
Here in New Zealand is no exception. Today an ASB report predicted that the Consumer Price Index (CPI) will come in at 0.9% quarter on quarter which would take the annual inflation rate up sharply to 2.1%. ASB do believe this is largely due to some one off price increases and the CPI will edge back down again.
But it is an indication that the historically low rates of inflation we have seen for many years won’t last forever.
Roger Kerr writing on interest.co.nz also believes with price pressures building in the domestic economy, non-tradable inflation will not continue to decline as it has done over recent times. So the RBNZ may have to bring forward the timing for interest rate rises.
Learn more about real interest rates: Real Interest Rates vs Gold Prices – What Can They Tell Us About When to Buy Gold in New Zealand?
Here’s another reason why inflation rates have stayed low in recent years… 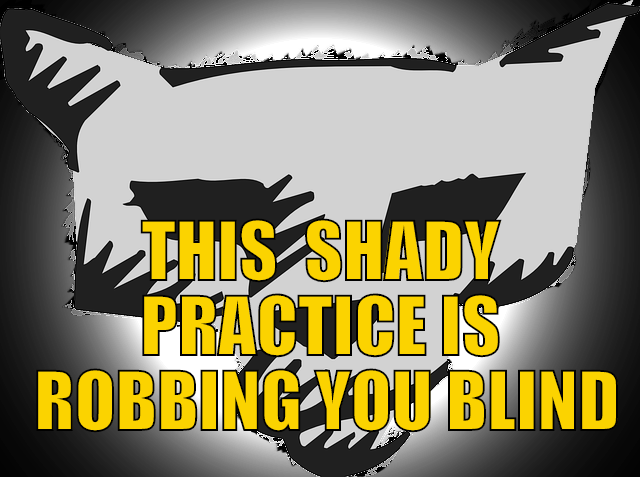 A Short History of International Currencies

Also in case you missed yesterday’s email we have the first part of an excellent history lesson of currencies that we received permission to republish for you. So if you haven’t checked that out yet, make sure you do so. 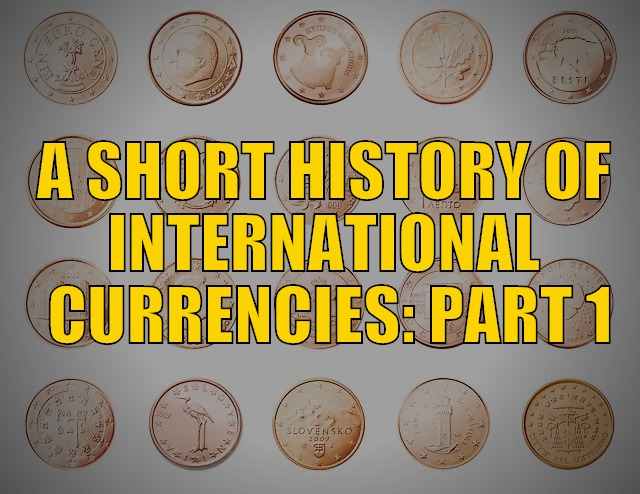 There’s plenty of reading for you in the articles on the website this week.
So we’ll sign off quickly today and go off to batten down the hatches.
Stay safe wherever you are as the cyclone approaches and have a happy Easter weekend.
— Prepared for Power Cuts? —
[BACK IN STOCK] New & Improved Inflatable Solar Air Lantern

Check out this cool new survival gadget.
It’s easy to use. Just charge it in the sun. Inflate it. And light up a room.
6-12 hours of backup light from a single charge! No batteries, no wires, no hassle. And at only 1 inch tall when deflated, it stores easily in your car or survival kit.
Plus, it’s waterproof so you can use it in the water.
See 6 more uses for the amazing Solar Air Lantern.
—–
As always we are happy to answer any questions you have about buying gold or silver. In fact, we encourage them, as it often gives us something to write about. So if you have any get in touch. Copyright © 2017 Gold Survival Guide. All Rights Reserved.