We’ve seen silver and gold both pull back further this past week. The lower New Zealand dollar has meant the falls in price have not been as great for us here in NZ as they were in US dollars.

You can see in the chart below that NZD gold has been trading between the $1650 level and the upper band of the rising trendline. The question now is will it continue to consolidate around this level or will we see a further pull back form here?

Well if the past year is any guide, we might be more likely to see it move back down to the lower band of the rising trend it has been in. 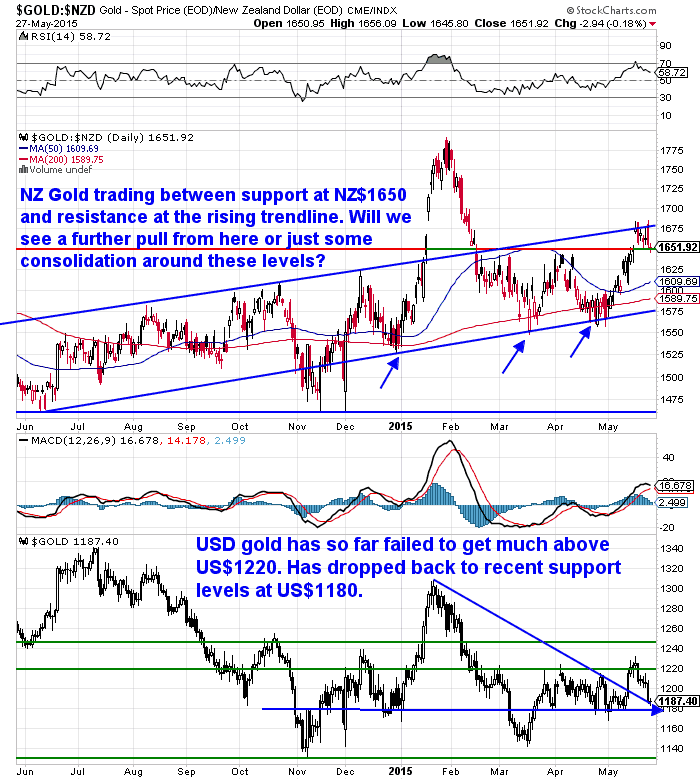 NZD silver has also pulled back this week. After the sharp rise it had in early May it could also move a fair bit lower yet too.

Although it does appear ready to then make a  challenge on the 12 month high around NZ$25 before too long. A move back down to the NZ$21 region is not beyond the realms of probability. But NZD silver would still remain in the uptrend it has been in since late last year even if it did retreat to this level. 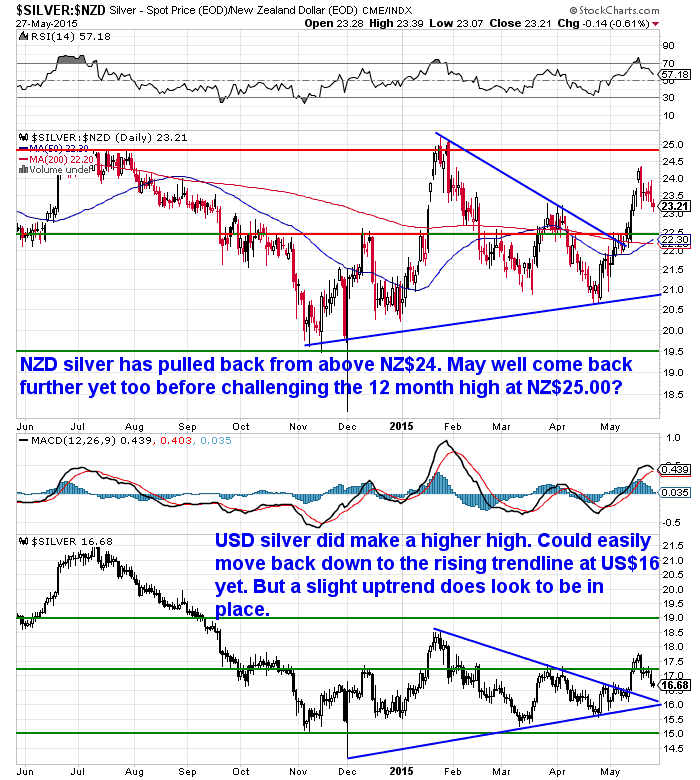 A concern for silver though is the recent futures data in the Commitment of Traders (COT) report. This shows that suddenly over the course of a week the commercial traders a.k.a bullion banks have increased their short positions significantly. As noted in this King World News report:

WARNING: Incredibly Important Action Taking Place In The War In The Silver Market

This post by Steve St. Angelo at SRSrocco Report does a good job of explaining this in more detail. He also outlines the strange occurrence whereby:

“During Jan-Feb 2015, the U.S. imported 838 metric tons (mt) of silver bullion versus 583 mt last year.  Moreover, I mentioned that overall demand for silver in the first quarter of 2015 is either flat or down compared to last year.  So, why would the U.S. silver market need additional silver bullion if demand is lower?  Who is acquiring this silver… and why?”
Source. ( NOTE: The srsroccoreport.com site appears to be down just as we send this so you might want to try this link on SilverSeek instead)

Indeed there do seem to be even stranger goings on in the silver market than normal. It appears that silver is set for a big move one way or the other. The question as always is whcih way?

The above “which way now?” question actually ties in well with this weeks feature article. A question from a reader on whether to buy gold and silver now or wait and see what happens in the coming months. 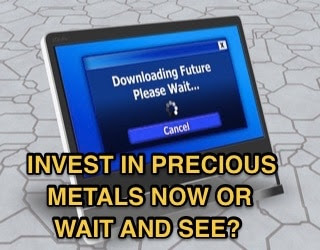 It was a great question asking about inflation vs deflation. Stock market and bond market crashes along with interest rates. It covers a fair bit of ground so we thought there might be a few other people out there with similar questions, so it would be worth sharing.

While our crystal ball is as stained, murky and cloudy as the next guys, we do offer some thoughts as to how you could position yourself if you are thinking of buying but worried about lower prices still.

This is as much about your psychology as anything, but important to consider. So if you are mulling a purchase we recommend you head over to the site and check that out.

Well, Catherine Austin Fitts presentation in Auckland on Saturday evening was fantastic. She really covered some ground. As her focus wasn’t on precious metals, unlike many of the speakers we’ve seen in recent years, we found we took a lot more away from it ourselves.

We’ll have a more in depth review for you next week, but here were a few highlights we jotted down during her talk which focused on the Global rebalancing between the East and the West:

She noted that debt in the developing world has grown massively since 2008. China in particular has really gone nuts on debt.

This in turns puts these developing economies at real risk even though this debt might be at low interest rates.

What risk is that?

She called it a “US Dollar bear trap”.

Most people expect the US dollar to continue weakening versus other currencies as it has in the long term.

But what if the Federal Reserve does in fact eventually raise interest rates? This would likely cause the US Dollar to skyrocket higher.

These developing nations would then need much more of their own dollars in order to repay their loans in a strengthening US dollar.

And unlike the US (having the world’s Reserve currency) they can’t simply print money in order to repay these debts.

As she said this it got us thinking what would a situation like this could mean for New Zealand?

Off the top of our head we think New Zealand still requires offshore funding for about 30% of our debt. (Sorry can’t locate the RBNZ data that confirms that right now.) We do recall this has fallen from over 40% pre GFC.

Nonetheless a “US Dollar Bear Trap” would likely make borrowing more expensive here too. Even if we have hedged and swapped and done other financial shenanigans if this offshore debt is not denominated in NZ dollars, at the very least our interest rates would have to rise sharply in order to attract the capital.

Much higher interest rates might not go down too well to anyone mortgaged up to the hilt.

Now Catherine wasn’t making a prediction here but it was food for thought nonetheless.

She did however also have a lot of positives to say about New Zealand’s position in this changing world. And said she’d rather be the NZ PM than the US president if given a choice!

She believes a global digital currency is what “Mr Global” (her moniker for whoever is pulling the strings at the top) wants to achieve.

So there was certainly a lot to digest. We’ll report back more next week. 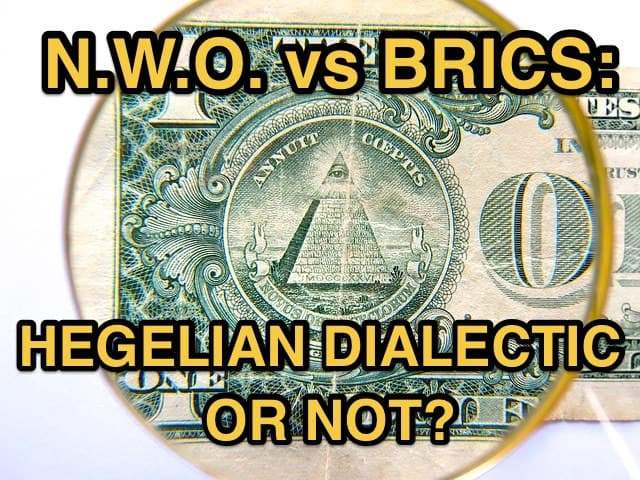 NOTE: Also on this topic of East vs West you should check out our other article at the end of this email:

NWO vs BRICS Hegelian Dialectic or Not?

A Different Slant on the New Zealand Budget

You’ve no doubt heard and read plenty about the government budget over the past week or so.

We noticed on Catherine’s Blog that while she was here in NZ, she pulled a couple tidbits out of the budget that we haven’t seen reported much elsewhere:

“The Anglo-American alliance — Australia, US, UK and Canada — as a trade partner to New Zealand has a combined 40% weighting. The G-7 members represent a 54% share.

China has surpassed Australia as the largest trading partner with a 25% rating. China plus “Other Asia”  now represents a 47% share. Asia-ex-Japan has grown ahead of the Anglo-American alliance and is likely to overtake the G-7 share.

“New Zealand has attended negotiations among prospective members to establish a proposed Asian Infrastructure Investment Bank. This is likely to take the form of a multilateral bank focused on supporting the development of infrastructure in the Asian region, leveraging both public and private funding. The size of any New Zealand contribution depends on membership and rules on the capital shares. The level of capital subscription is currently estimated at between $100 and $150 million, payable across 2016/17 to 2020/21.”

The shift of alliances driven by a growing Asia continues.”

We received a note from a regular reader (Thanks M) referencing a letter he sent in to Mary Holm in the NZ Herald last weekend.

You might be interested to check out the responses she got from the RBNZ on his questions about the validity of their recent bank strength tests and also why the RBNZ has no gold reserves.

See this link and scroll down to the heading “Banking stability tests”.

If you don’t share the RBNZ’s faith in their bank strength tests, or their rationale for having no gold reserves, you may wish to remove some cash from the banks and have your own reserves instead.

We’re happy to help or if you’re ever in Auckland and have a few questions we’re happy to have a chat over a cuppa. Drop us a line if you do.

8 Left Only: Fijian Pacific Sovereign gold coins for $1685 per ounce