Home / Weekly Newsletters / Ronni Stoeferle: A lot of institutional money on the sidelines so no bigger gold correction

A change from the past few weeks saw gold outperform silver this week. Gold in NZ Dollars surged higher by 3.59% and looks to be mounting a challenge of the highs from March around the $1900 mark. We get the impression most people have been expecting a significant correction in precious metals after their strong start to the year (more on this soon).

Perhaps instead we will see gold consolidate between the 2 red horizontal support/resistance lines for a little while now? 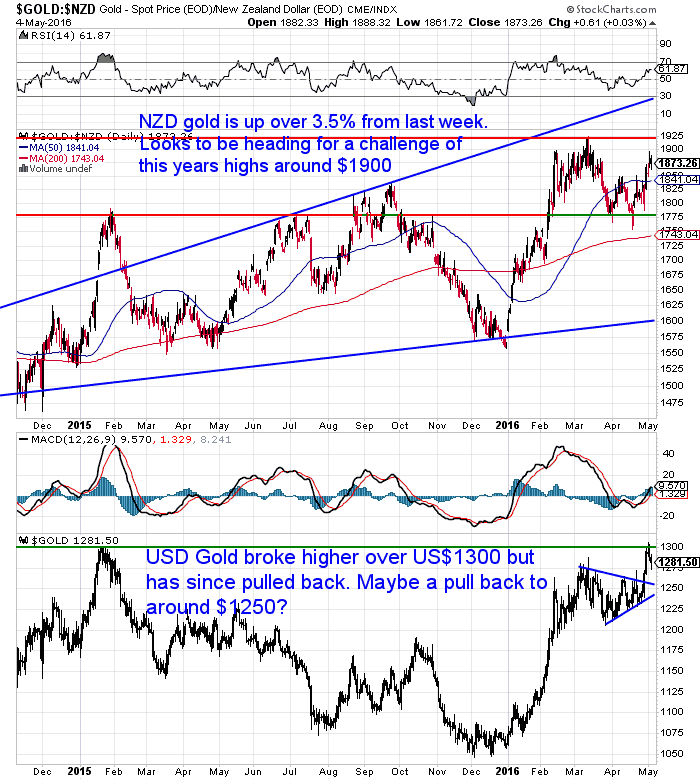 Significantly NZD silver broke through the key $25 overhead resistance this week. We’ve been writing about this line on the sand for a while now. Why is this $25 zone so important?

Well, the movement above this level indicates a change from a sideways trading pattern to an upward trend, that becomes clearer in the multi year chart below. Silver had been trading sideways since 2014 between $20 and $25. Now that it has broken above this level it augurs well for higher silver prices ahead. 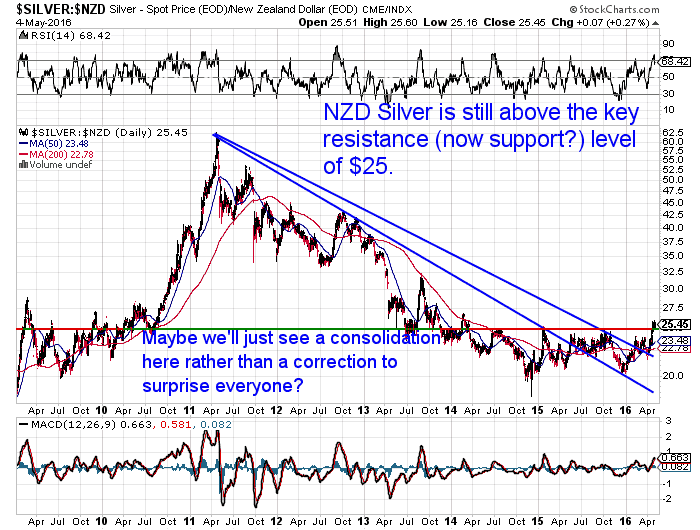 Turning to the Kiwi Dollar now. After extending upwards it has turned lower the past 3 days. No real change here, it continues in its slight uptrend. But not enough to put too much of a dent in local gold and silver prices. 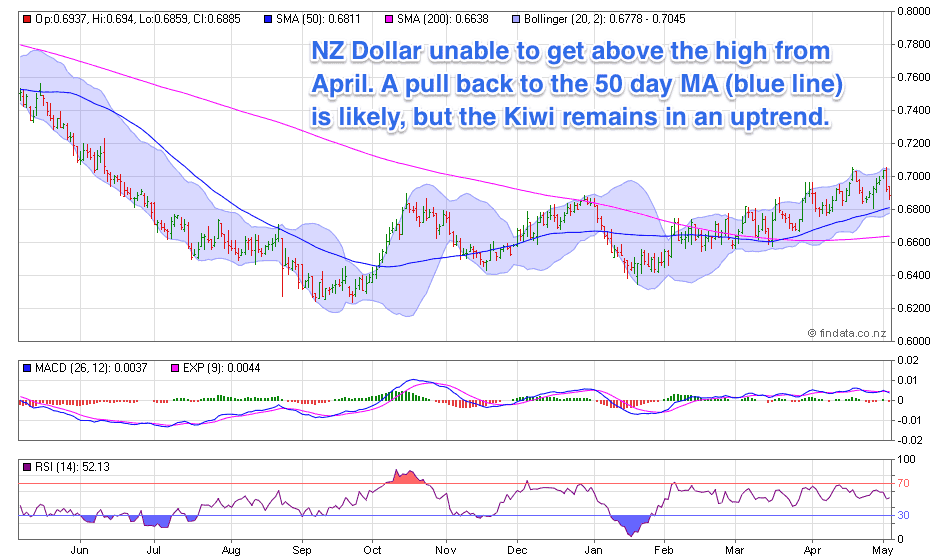 A Precious Metals Correction Must Come Now? Mustn’t It? 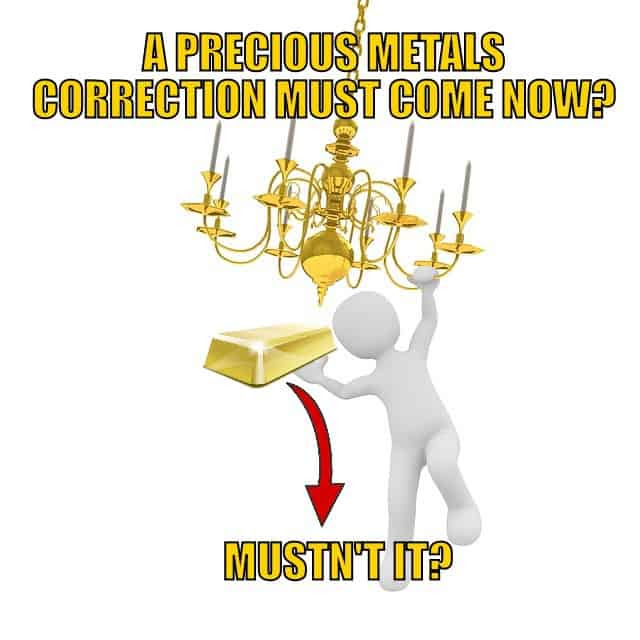 As already noted there seems to be a lot of people expecting a correction in gold and silver after such a powerful start to the year.

We tackle this question in this weeks feature article. We back up our reasoning with what money is actually doing. Where it is going and where it is leaving. We also gives thoughts on what to do about it if you are on the sidelines looking to buy.

A Precious Metals Correction Must Come Now? Mustn’t It?

Ronni Stoeferle: Gold – “A lot of institutional money on the sidelines”

Yesterday we received the latest Advisory Board Meeting minutes from Ronald Stoeferle of Incrementum entitled: A New Bull Market in Gold?!

We’ll highlight a few of the most interesting points made for you.

Ronni made a couple of points which we were pleased to see backed up much of what we had to say in the feature article just mentioned on the possibility of a precious metals correction.

“When it comes to gold, institutional clients and bankers and that like tell us that they’re waiting for this kind of correction. So there seems to be so much money on the sidelines that no bigger correction is happening – everybody is just buying the smallest dips.”

“They are buying every dip, as they have not participated in the gold rally in Q1.”

“What I feel while talking to a lot of asset managers in the gold space, which really suffered during the last 4-5 years, is that many of them are still extremely cautious and most of them don’t really believe that we’ve seen the end of the correction and have entered a new bull market. But the price behavior and the development of mining stocks make me pretty convinced these days that this is the beginning of the next stage of the bull market of gold. But I think this cautious attitude is of course a product of the last 4 years, when we have seen quite a number of bear market rallies – when it comes to the sentiment within our space, I think it’s still slightly bearish.”

Brent Johnson discussed the Commitments of Traders data for gold:

“The other thing that I think leads to being somewhat cautious is the Commitment of Traders. This chart goes back to 2013, and this chart has worked like clockwork as far as gold rallying and gold pulling back. The Commitment of Traders looks at the different market participants. What I’ve charted here is the futures positioning of the Commercials. These are the big banks and their customers, who actually deal in the gold world, use it as a product. They in my mind have more knowledge, are better informed, and they to a certain extent tend to be the smarter people in the market as opposed to just the pure speculators. And so it’s kind of worked like clockwork. And the Commitment of Traders has not been more net-short than now since the bear market started. There’s been one other time when it was at this level, but it hasn’t been deeper than this as far back as I can see. So caution is warranted.” 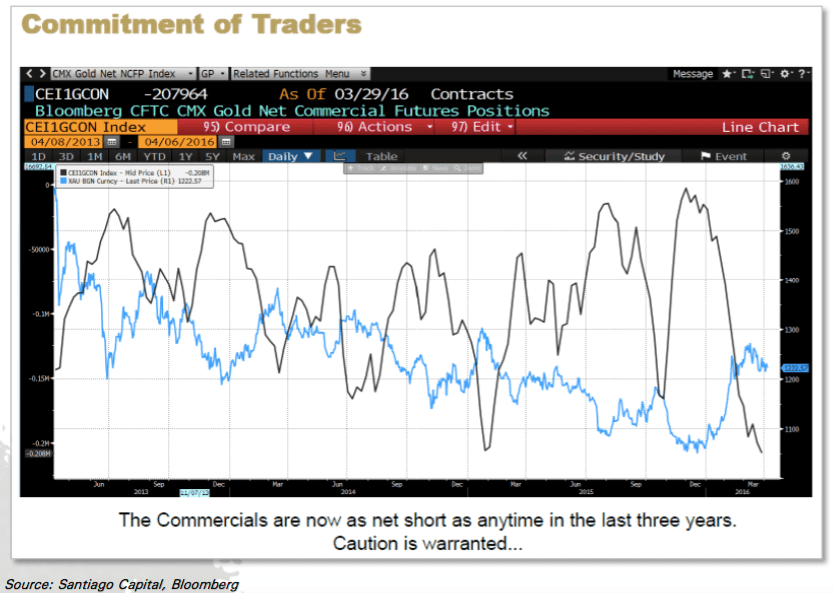 We’d reiterate what we said a few weeks ago:

This chart is looking at what has happened with gold futures over the past 4 years. This has obviously been a bear market in gold and silver.

But it seems to us that the tables have turned and we are back into a bull market. This looks to have been driven of late by big money, institutional investment. Evidenced by the rise in holdings in the gold ETF GLD.

So perhaps the same rules may not apply and it might be this new money that decides the trend, rather than the commercial traders this time?

A correction looks overdue and would be expected. But maybe that is just it. It is expected by many people. We may instead see the opposite occur with an ongoing consolidation instead.

Heinz Blank made a good point about the gold silver ratio:

“If you look at the beginning of the gold bull markets generally, you will always see this, because gold usually starts to outperform other assets when economic confidence declines. When economic confidence declines, silver is less attractive because it’s partly an industrial metal, so you’re correct. If you see gold is outperforming silver, then it usually means we’re either in that early phase where gold outperforms silver in the world markets and silver then will start outperforming after a certain lag-time; or we’re in a bear market rally, that’s the other possibility. I actually don’t believe we’re in a bear market rally anymore, because gold stocks as of today are up 108% from their low – so that’s a pretty big move! That’s already a bull market in my opinion.”
[Note: This was actually referring to how gold was outperforming silver which was the case on April 10, but just days later silver then began to rapidly rise and outperform gold. So that would suggest that we are in the early phase of a gold bull market rather than a bear market rally.]

Heinz also had a comment on the COT report which is a bit long to reproduce but did say:

“What this report means depends a bit on the circumstances.”

Which is similar to our comments repeated above from a couple of weeks ago, in that the positions being discussed have only been during the bear market of the past few years since 2012.

If we are in a new bull market in gold, then it could be the speculators who impact the price more than the commercial traders. 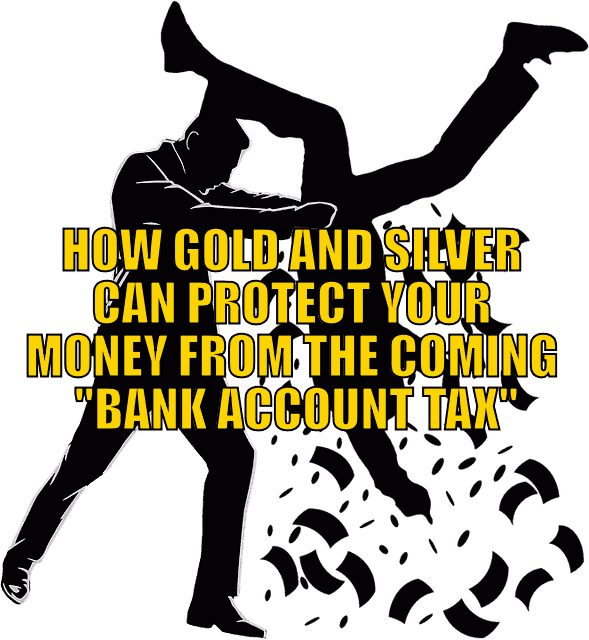 Did you hear what Deutsche Bank are proposing the ECB implement?

We’ve also got a couple of not so directly precious metals related articles on the site this week. One dealing with financial privacy and the other with do we actually need government?

These both tie in to a great quote from Jared Dillon on economic freedom:

“Part of economic freedom is the ability to transact anonymously. Take the extreme example where cash is eliminated altogether. Everything goes on a credit or debit card. Your whole purchasing history is stored on the Internet. Well, if you’re not doing anything wrong, you have nothing to hide, right?

Part of freedom (including economic freedom) is the ability to do bad things. Do you want to eliminate the option for people to do bad things, or do you want to give people the choice to do the right thing? All morality is meaningless if people are given no choice of whether to behave or misbehave. This is a deep philosophical issue.

But this talk about large-denomination bills is really gaining momentum, and honestly, I think it is at least half responsible for the run up in gold prices over the last couple of months.”

After the number of significant earthquakes lately Jim Rickards commented on some of the financial fault lines they are monitoring right now:

“What are the new data points that are going into the Bayes model to update our forecast of a financial meltdown?

Here’s a list of the main fault lines leading to disaster:

There’s more, but that’s enough of a list to make the point that confidence in my forecast of a major financial earthquake ahead is getting stronger by the day.”Source.

Here’s a few others to consider though. From Charles Hugh Smith – Of Two Minds Blog comes this list of crazy stuff going on across the planet:

— 25% of all stock market gains occur after Federal Reserve meetings: in other words, central banks “own the market.”

— The Swiss central bank admitted to spending $470 billion on currency market manipulation since 2010.

— Other central banks have intervened in the stock and bond markets to the tune of trillions of dollars/yen/euro/yuan.

— The central bank of China has spent over $100 billion in a few months propping up the yuan.

— U.S. corporations have borrowed billions of dollars at 1% to buy back their own shares–a dynamic that may account for 50% of the current rise in the stock market.

— ObamaCare has added costs to the healthcare system rather than reducing costs; though healthcare spending adds to GDP, it is a form of consumption, not production.

— Cheap credit enabled energy companies to boost production to the point that oil is now in over-supply–and the need for revenues to fund the debts taken on to expand production force producers to keep pumping.

— Sweden has dropped its interest rate to negative territory, a policy that has sparked an insane housing bubble.”

That sure looks like a lot of potential troubles.

However here’s an important point to note.

That said gold’s role as financial insurance should not be underestimated. As Heinz Blasnik said in the Incrementum board meeting:

“To keep the system going, central banks must print – people are probably realizing that by now. So there are plenty of reasons to buy gold as insurance.”

Got your insurance yet?

** Urgent Message for All Car Owners ** One thought on “Ronni Stoeferle: A lot of institutional money on the sidelines so no bigger gold correction”