We’ll have to admit we were somewhat taken by surprise by the sharp rise in gold and silver over the past week.  Last week we mentioned we thought Gold in NZD could be testing the $2000 level again but instead it has risen sharply this past week on the back of the European “Solution”.

Speaking of the European “solution”, we were going to write a bit of a summary of it yesterday morning, and cover why the solution was not likely to be long lasting.  But then we woke to hear that the Greek Prime Minister is going to put the new debt deal to the vote via a referendum.  So the deal is looking shaky already, considering the referendum won’t be until the New Year.

One of the few mainstream print media journalists worth even reading is Ambrose Evan-Pritchard of the Telegraph in the UK.  On the subject he says:

Greece’s astonishing decision to call a referendum – “a supreme act of democracy and of patriotism”, in the words of premier George Papandreou – has more or less killed last week’s EU summit deal.
The markets cannot wait three months to find out the result, and nor is China going to lend much money to the EFSF bail-out fund until this is cleared up. The whole edifice is already at risk of crumbling. Société Générale is down 15pc this morning. The FTSE MIB index in Milan has crashed 7pc. Italian bond spreads have jumped to 450 basis points.

Unless the European Central Bank step in very soon and on a massive scale to shore up Italy, the game is up. We will have a spectacular smash-up.

To us the deal only ever seemed like a papering over of the cracks anyway.  If we had to stick our neck out we’d go for currency printing in the long run anyway.  Everyone else is – why not the European Central Bank even if it is against the rules?  And if you want to read why this is the likely outcome check out this ZeroHedge post:

Albert Edwards: “The Eurozone Crisis Will Get Much, Much Worse” And “The ECB Will Print”

The Pros of the Cons of Owning Physical Gold Bullion

Gold and silver are difficult to buy and store and a hassle to sell but as Gerald Celente comments on King World News this perceived hassle is also one of gold’s great advantages:

“Only speaking for myself, I don’t invest for risk, I invest for the future.  Gold and silver for me are for my golden years, I’m not letting go of this stuff.  When you have a precious metal like that, silver and gold, that is a real asset.  When you own these precious metals, you don’t sell them as quickly.

For example, when you are going into a financial slump and you need dough, you write a check and that money is gone out of the bank and it is gone in a flash.  But when you have a precious metal, it’s more difficult and you are more hesitant to let go of it.  So you tend to hold on to it.”

The other “pro” of this “con” of gold being more difficult to sell than say shares is that in times of volatility like we’ve been through recently you are less likely to be shaken out of your holdings.

By next weeks email we should hopefully have our new look website up and running.  So keep an eye out for that.

In other improvements we are aiming to have a live webinar coming up in the next few weeks aimed at answering any questions you may have on the subjects of gold and silver.  We’ve a bit of work to do first but in the meantime think of any questions you may like to ask as we’ll likely ask you to send us a few of them in advance.

Silver and gold have certainly dropped off the radar screen of the mainstream lately.  They are both acting quite well consolidating and trading in a range.  To us as buyers that’s good because it is likely building a good base for the next rise.

In fact we read this article from Dailywealth.com last week just after we sent the weekly updates out that showed silver is actually hated at the moment…

In early September, silver was on a hot streak. It rose 29% from its June lows. It held its gains when the market plunged in August. And as Europe’s debt crisis escalated, investors flocked to silver as one of the world’s safe havens.

But times have changed. Over a two-day span in September, silver fell 22%. Investors panicked and fled the metal as fast as possible. 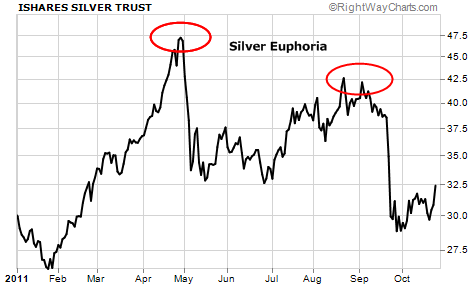 As you can see, silver has had two major crashes this year. Both resulted in a 20%-plus fall in a few days. Silver has a habit of crashing when the trade gets crowded. But right now, the opposite is going on…

Jason Goepfert of SentimenTrader tracks public opinion of silver. According to Jason, silver just bounced off its most pessimistic reading in five years (as long as he has data).

So what happened the last time we saw investors this pessimistic?

Since then silver has risen a bit currently at about $33USD an ounce. But sentiment wise it really hasn’t moved too much even with the Euro shenanigans going on.

So if you’d like to get your hands on some when it’s not favoured by the crowd, now looks as good a time as any.

Give David a call on 0800 888 465 or email orders @goldsurvivalguide.co.nz for a quote.  Or visit our products page to see the full list of available products…

And as usual this weeks articles are listed below.