After the sharp rises last week, gold and silver were a little quieter in their rises this week. As you can see in the table above, the falling NZ dollar (more on that in a minute) had the most impact on local NZ prices.

NZD gold looks to have bounced off the uptrend line yet again this past week, and continues to edge quietly higher. 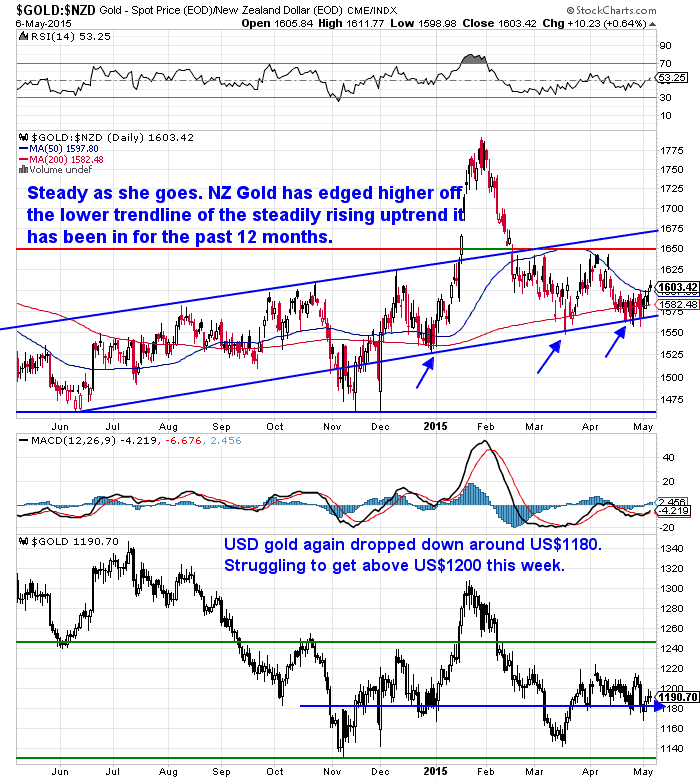 While silver in both USD or NZD has reached the upper boundary of this wedge formation so we could see a breakout very soon. 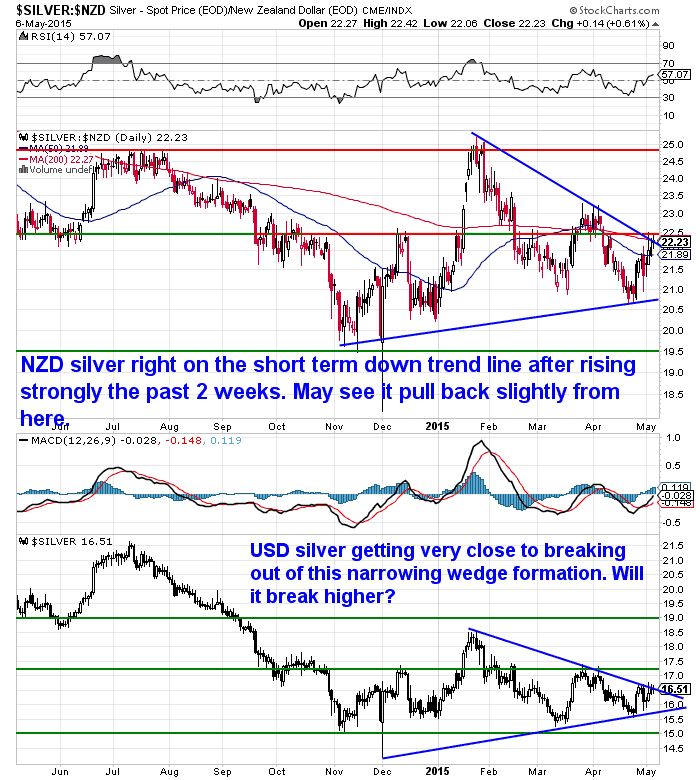 As noted already the NZ dollar was lower against the US dollar this week. Which is interesting given the USD index has actually been falling quite sharply. Of course the US Dollar index is made up of major currencies of which the Kiwi is not included. This just shows the NZ dollar is losing some favour currently.

This is also backed up by it falling against the Aussie Dollar. Back on April 9 we noted:

If you’ve seen the news this week, all the talk has been of the Kiwi dollar reaching parity with the Aussie dollar.

Of course when a topic is in the news this much maybe it has gotten a bit overblown?”

Sure enough the Kiwi has fallen back quite sharply since then from near parity to only 0.95 today. 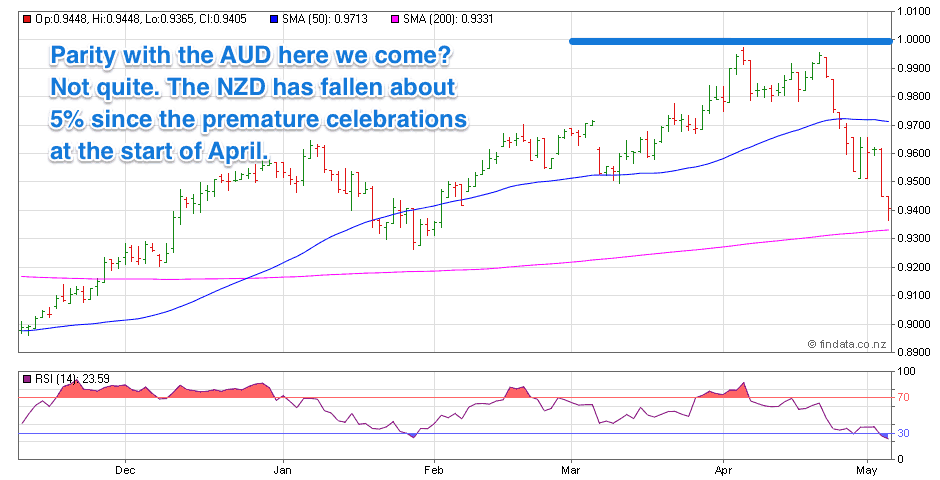 And even when the Reserve Bank of Australia (RBA) announced an interest rate cut on Tuesday the NZD fell even further.

One argument we read was that this is because it was viewed by FOREX traders that the threshold for any further rate cuts from the RBA was now very high.

“The New Zealand dollar fell against its trans-Tasman counterpart after the Reserve Bank of Australia opportunistically cut interest rates, which traders interpreted as meaning there was a high hurdle for future easing. The kiwi fell to 95.45 Australian cents at 5pm in Wellington from 96.07 cents immediately before the announcement, and 96.15 cents yesterday.”

Who knows? It wouldn’t surprise us to see Australian interest rates fall even further though.

But by contrast, as we noted last week, the RBNZ rate cut odds were seen as 50/50.

“• Inflation risks are tilting to a lower OCR – we have changed our call to reflect that.
• Though cuts depends in part on how the RBNZ interprets its “medium term” target focus.
• We expect 50bp of cuts from the RBNZ, most likely 25bp apiece in September and October.
We have now moved to forecast the RBNZ will cut the OCR later this year, having since mid-January ruled out OCR increases for the “foreseeable future”. We believe the risks of inflation taking too long to make a sustained return to the 2% mid-point of the inflation target have now got high enough to warrant a response. Accordingly, we think the RBNZ will give inflation a nudge up through 50bp of cuts, most likely 25bp in each of September and October. But an earlier start is conceivable.We put a 60% probability on any cuts occurring.”

So as we’ve been saying for some time lower rates here look more likely than higher for a while yet. Look out for when the bank economists are saying rates will go much lower. That will be when they rise!

“So, Sydney [house prices are] expensive. But is it now excessively expensive compared to other ‘international’ cities? It pains me to say it, but it doesn’t look like it is.

That’s why you shouldn’t expect the RBA to use high house prices as an excuse not to cut interest rates. Interest rates in the US and UK are much lower. That explains the high property prices.

In short, high house prices won’t stop the RBA cutting rates. Thanks to years of manipulation in the housing market, the RBA knows that it can’t create a ‘soft landing’ in house prices.

When Aussie house prices fall, it will be an almighty crash. So the RBA won’t do anything to cause that. Instead, they’ll try to do what all central banks do when faced with an expanding asset bubble — they’ll try to keep it going for as long as possible. Or at least until they’ve retired; then it’s someone else’s problem.”

We agree that is what the RBNZ will do over here.

We reckon the RBNZ is really just paying lip service with talk of rising debt levels and high house prices in NZ. At the end of the day they will cut interest rates to “get inflation higher”.

Here’s another similarity we share with our trans tasman brethren – our banking system.

This is an interesting angle on why the German economy remains so robust when the rest of Europe has been struggling for years. It’s about how they “allocate their credit”…

“–The key to Germany’s success is not bratwurst but banking. The German model is the polar opposite of the one we have here in Australia.

–For example, only 13% of the banks in Germany are large, nationwide banks. The majority of the banking system, around 70%, is in the hands of locally controlled, small banks. They lend mostly to productive small and medium sized businesses. This is the type of credit that leads to real GDP growth, and higher wages. It’s also why German unemployment is so low.

–By law most of those local banks must lend to their local area. That means the health of their community is tied to their performance. And they don’t lend for speculation in asset prices.

–It makes for a much more productive economy. And a much safer, decentralised banking system. Because unproductive credit creation (such as financial credit like mortgages and margin loans) is linked to asset inflation, bubbles and banking crisis.

–Now compare the German system to what we have here in Australia with the ‘Big Four’ banks owning most of the banking assets of the country and financing mostly property speculation. Then the priests at the RBA go through the ritual, waiting for the Nile to rise.

–Oh wait! It’s all going to be ok anyway. The High Temple at the Bank of International Settlements is going to make Australian banks raise their capital levels and make them ‘unquestionably strong’.

–But…but…where’s the evidence for that working again? Oh, that’s right. Same as above. There isn’t any.
Source.

Australia Set to Launch a Tax on Savings

We do spend a bit of time keeping an eye on Australia as historically our fortunes are tied.

We’ve been hearing news over the past 2 months that they are set to launch a “Compulsory Tax on Money Itself” – as Martin Armstrong puts it – in their upcoming budget.

Armstrong reckons this is a “trial balloon for the global economy” and should ring alarms bells for us all.

“This decision to put a tax on savings would seriously harm the government, and if there are any smart Australians, it should be a race to get the hell out of the banks. The banks should see a massive withdraw. Take your money and buy tangible assets, even gold, but you just cannot store it in a bank.”
Source.
—– SPONSORED —– Preparation also means having basic supplies on hand.
Are you prepared for when the shelves are bare? 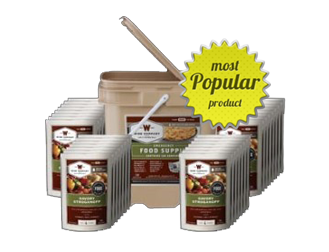 Speaking of tax, you should be celebrating today. Yesterday was the last day you were working for the government. From today you get to keep all the money you make for the rest of the year!

“The notional day on which Kiwis have paid off their collective tax bill for the year and can keep the rest of their income for themselves falls [today].

One of the reasons was that tax brackets, which determine the rate of tax people pay on their income, had not been increased in line with rising wages…

The accounting firm calculated that of the 365 days in the year, people would spend 113 days paying central government taxes, 13 days “working for local authorities” and would keep the equivalent of the remaining 239 days.
Source.

If you’re on PAYE it disappears without you realising. So seeing in black and white that you only spend 239 of 365 days (or just under two thirds of the year) “working for yourself” puts it in perspective.

Also as noted in the article the silent thief inflation pinches from you in more ways than one. Not only does it make the everyday items you purchase more expensive steadily overtime, it also helps the government take more tax from you as a result of the tax brackets not changing with inflation rates.

Another Reason House Prices May Continue to Rise

Over the past month we’ve discussed the high likelihood of a change to the global monetary system in the not too distant future. With China likely having their currency added to the IMF’s global currency the Special Drawing Right (SDR) in the coming year. And potentially an announcement of their updated gold reserves to help put their currency on solid footing.

As part of this process they would almost certainly have to remove their current peg of the Renminbi (RMB) to the US dollar. This post does a great job of explaining why:

When will China End the Dollar Peg?

“It is rudimentary to suggest that the country with the largest economy on Earth can not keep its currency pegged to that of another. The price discovery which will take place in the opening days of the pegs end will see appreciations of the RMB. Some of the benefits of this upward valuation will be realized as foreign funds are encouraged to enter China, there will be lower Chinese company operating costs, in the form of cheaper imports, and the Chinese will be able to purchase foreign assets cheaper.”

That last point makes us wonder whether we could yet see even higher prices of property here in New Zealand? If China has a stronger currency that would give them more buying power here too wouldn’t it?

Note: If you like a shorter read on this topic, then check out this excellent article from Lawrie Williams on MineWeb:

What happens to gold when the yuan floats free of the dollar?

There is certainly a lot going on across the planet. We are in an age of rapid global change. Luckily if you live within cooee of Auckland you have a chance in just over 2 weeks to hear from Catherine Austin Fitts of The Solari Report speak on:

The Global Rebalancing: What is it? Why is it happening?
Saturday 23rd May 4-6pm

It’s only $20 and is a fundraising event for the Ficino Educational Foundation. Catherine’s attendance was organised by our friend Louis Boulanger who brought out Ronald Stoeferle who writes the In Gold We Trust Report, Chris Powell of GATA, and John Butler author of The Golden Revolution in 2013.

They were all great events to attend. So this one is sure to be a great afternoon too.

Click below for the full details and email us back if you’re going and let us know. Might be the chance to meet up afterwards: 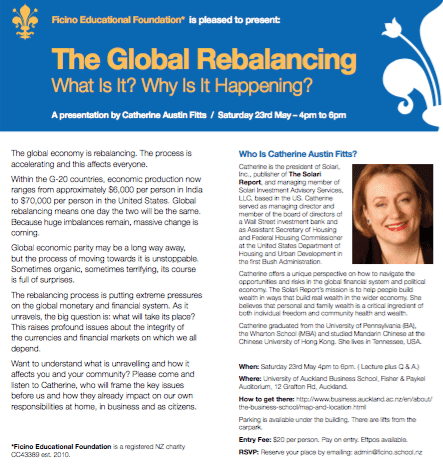 Well, that was quite a lot to digest today! The coming year could see quite a lot of changes take place.

Best to be on board before they actually take place. With gold and silver in the ‘sandpaper zone”, where the price just moves up and down in a small range, wearing everyone down until most have had enough and give up, this is likely a good time to take a position in either metal.

Get in touch if you have any questions.