The trend over the past week has been for a slightly stronger NZ dollar and slightly weaker gold and silver prices.

You can see in the charts below that both gold and silver (especially their NZ dollar prices) have continued to pull back over the past week.

But both may now be getting close to making “higher lows”. Meaning both (in NZ dollars at least) have fallen back but only to a level higher than the previous times they pulled back.

This results in them both trending higher – over the past year for gold and past 4 months for silver. 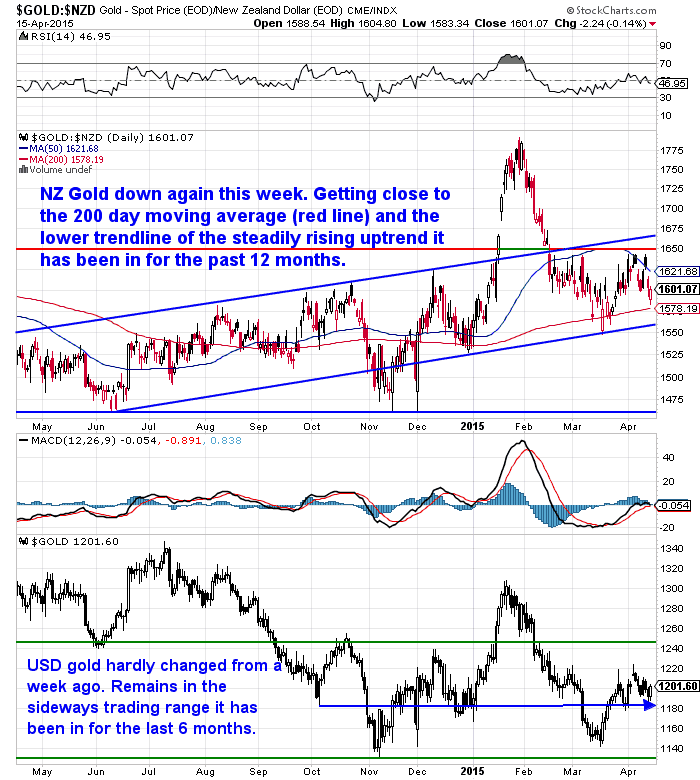 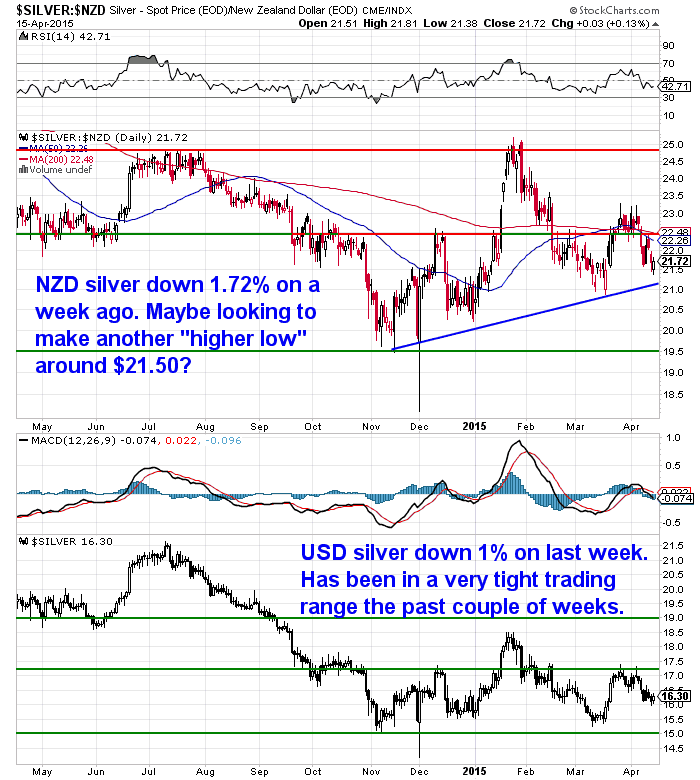 In the Global Dairy Auction overnight Whole Milk Powder prices dipped 4.6%. We saw this morning that ASB has gone a bit more negative with their outlook for 2015/2016 milk price forecast as a result. So their previous view that farmers may not have to wait too long before a rise in prices looks to be changing.

It seems even the odd bank economist and money manager is slowly coming around to our way of thinking.

That the next OCR move by the RBNZ is more likely to be down than up. We’ve been floating this idea since way back last year, that interest rates globally are still on a down trend and so we’re likely to follow.

Next OCR move likely to be down if it’s this year, up if it’s next year or in 2017, Harbour’s Hawkesby suggests

While most talk about how low rates are great for house owners. Retirees looking for income  will be doing it tough in this low interest rate environment.

Still it could be worse.

We could have negative interest rates like a number of European countries.

See the below chart from Mauldin Economics: “You may have no plans to invest in Sweden, Denmark, or Norway, but the universe of negative interest rates extends beyond those Nordic nations. Today, 16% of the world’s government bonds have negative yields.

Yup, investors now have to pay for the privilege to loan money to governments, for example, in Germany and France.

One day we might tell our wide-eyed grandchildren that once upon a time, governments and corporations actually had to pay the lenders for the privilege of borrowing money.

For the most part, individual savers don’t have to pay for the privilege of leaving money in the bank, but institutional customers—even in the US—are getting nailed. JPMorgan Chase recently announced it will charge institutional clients as much as 5.5% on deposits, and several banks are already charging corporate clients to hold eurodollar deposits.

One of the most astute central bank observers I know, Joan McCullough, says that there may not be a limit to how much QE money the ECB will spend, and she wouldn’t be surprised if the central bank took interest rates down to -5%, like the Swiss after the demise of Bretton Woods.

Instead of trying to find some logic in the actions of central bankers, let’s focus on what the free-market response by banks, pension funds, and institutional investors will be.
Short-term US bond yields are barely above zero and yields on long-term bonds are near historic lows, too.

Let me repeat that: The lowest yields in the history of the United States.

Furthermore, the yield curve has flattened almost back to the levels of the 2008-2009 financial crisis, so while Janet Yellen may talk tough about raising interest rates… the bond market believes otherwise.

I expect long-term interest rates to head even lower. In fact, I believe the big shock will be how low they go.”

Speaking of Interest rates. It’s funny how they continue to be almost completely ignored in the discussion of Aucklands steadily inflating housing bubble.

Today all the discussion has been around the RBNZ deputy Grant Spencers speech in Rotorua where he discussed the problems in Auckland housing.

We read the RBNZ press release last night.  But this article gives a decent run down of what he covered in his speech: Regulators eye curbs for residential property investors

Spencer said the RBNZ may yet implement policies to dampen the lending to property investors, but he thought this may have limited impact.

He also called for the government to do more.  Such as streamlining approvals to get more supply and reducing the tax advantages property investors enjoy.

We heard some discussion of capital gains tax on the radio this morning, with responses from Bill English that there is already means for the IRD to chase property speculators who buy and sell homes for income tax.

So highly unlikely that the government will do much. We’d go so far as to say they don’t want house prices to fall. Why’s that?

Because if they did the house of cards would fall over and they’d likely be kicked out! They may talk up cheaper houses but the NZ economy requires rising house prices to continue to function.

Interestingly in his speech Spencer did outline the risks NZ faces if prices were to fall:

“New Zealand is one of the few advanced economies not to have experienced a major house price correction in the past 45 years of the kind that threatened financial and economic stability.

“That’s the worry, that people get carried away and think it is a one-way bet. It [a crash] never happens – until the first time it happens.

“The corrections we have had in the past have been relatively moderate like in 2009 when there was a 10 per cent pullback [in house prices].” But as global interest rates return to more normal levels, many mortgage borrowers could come under pressure as they are required to refinance at higher rates, Spencer warned.

“Alternatively, a downturn in the global economy and financial markets could lead to a drop in national income and rising unemployment, at the same time as foreign creditors are requiring an increase in the interest rate premium charged to New Zealand borrowers. In such circumstances, we could see the cost of credit rising at the same time that incomes and employment were under pressure.”

If a drop in demand for housing came as new supply was multiplying, prices would begin to fall. “With 60 per cent of its lending in residential mortgages, the New Zealand banking system could be put under severe pressure in such scenarios.”

What do we reckon about all these ideas?

On the surface they may all seem to make sense.

But we reckon they all completely miss the point.

Most commentators believe supply is the problem. Certainly we wouldn’t disagree that bureaucracy certainly adds to the cost of a new house.

A capital gains tax hasn’t had any impact in Australia. They have houses prices in Sydney and Melbourne going nuts too.

On that note housing is also rising in many other major cities across the planet.  London, New York, Vienna,.  Do they all have supply problems as well? Perhaps.

However we’d think it more likely as a result of money being strongly encouraged to go into housing due to the lack of ability to gain an income anywhere else.

That is record low interest rates are the key driver. It means you can leverage up to even higher levels than previously while rates remain low.

Do people say it is a lack of supply that is driving up the prices of dividend paying shares like the Power Companies? No – it’s more demand, driven again by low interest rates.

However the RBNZ of course didn’t put their hand up and say they were the cause of the low interest rates!

But Mr Spencer failed to even mention low interest rates at all in his speech from what we could see. 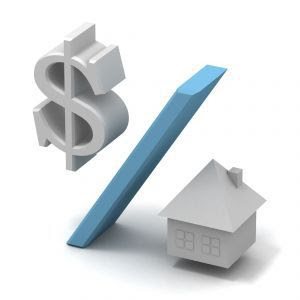 So we’ll stick to our previous theory.

That it’s not really supply but the ever rising debt levels now compounded by record low interest rates that is the cause of housing un-affordability. Gold-Backed SDR “Is Quite Likely To Happen”

Two weeks ago we discussed the pending changes in the IMF’s Special Drawing Rights (SDR). And how gold may well end of in the SDR basket before too long.

Well this week saw an article on Zerohedge quote the chairman of the Official Monetary and Financial Institutions Forum (OMFIF) that:

“We could ask that gold be nominated as part of the SDR. That is one thing I think is quite likely to happen”

This will be easier if China increases its official gold holdings.”

We couldn’t actually find this quote anywhere on Bloomberg, but maybe its not available to the public?

But we did head over to the OMFIF website to see what we could learn there.

In case you didn’t know, the OMFIF “is an independent research and advisory group and a platform for confidential exchanges of views between official institutions and private sector counterparties.

The overriding aim is to enable the private and public sector to learn from each other in different ways, promoting better understanding of the world economy and higher across-the-board standards. OMFIF’s main areas of focus are economic and monetary policy, asset management and financial supervision and regulation.

OMFIF co-operates with central banks, sovereign funds, regulators, debt managers and other public and private sector institutions around the world.”

Basically a governmental and corporate insiders group. So probably worth paying attention to what they say.

We did see that coming up tomorrow the OMFIF has a meeting in Washington co-hosted with the World Gold Council on:

Gold, the renminbi and the multicurrency reserve system

“OMFIF, in association with the World Gold Council, hosts a select group of central banks and other official sector institutions for a breakfast discussion on gold, the renminbi, and the multicurrency reserve system. Discussions are under Chatham House Rules and take place during the International Monetary Fund and World Bank Group spring meeting in Washington.”

So that sounds like it could contain some similar points of view. We’ll have to keep an eye out for anything that comes into public view after this meeting given Chatham House Rules do let attendees reveal what was discussed, just not by whom.

Interestingly the OMFIF chairman Lord Meghnad Desai, might have changed his tune a bit on gold in the past few years.

While searching for the Zerohedge quoted news item on Bloomberg we discovered this article from 2012:

Gold’s Use to Back Value of Dollar Would be Impractical

“Including gold in the International Monetary Fund’s Special Drawing Rights system probably wouldn’t bring substantial benefits, and adding developing economies’ currencies to the basket would be more desirable, according to the task force. SDRs were created in 1969 and are an artificial currency that IMF members use to settle accounts with each other and can be converted into hard currencies.”

This was part of a statement by the Members of the Chatham House gold task force. And one of its 3 members was “Meghnad Desai, professor emeritus of the London School of Economics and a member of Britain’s House of Lords”.

Not sure what’s happened since 2012, but that seems like a complete about face to us in terms of gold and the SDR from Lord Desai.

We’ve noticed more and more of these snippets about gold, the SDR and China in recent months.

It seems we are getting closer and closer to a change in the global monetary system.

Our guess is that gold will eventually be more formally involved than it is now. But perhaps not until we have seen another financial “crisis” more serious than the last.

Best you be on board before this happens. The quiet but steady uptrend we’ve seen from gold and silver in recent months could mean this is a good entry point.