Gold and Silver Take it on the Chin

Gold and silver have taken it on the chin this week regardless of in which currency they are looked at.
NZD gold is down close to 3% from a week ago and at the lowest price since March. It is now sitting right on the 200 day moving average (MA) line and getting close to oversold territory. A chunk of this fall is due to the strengthening NZ dollar – more on that soon. 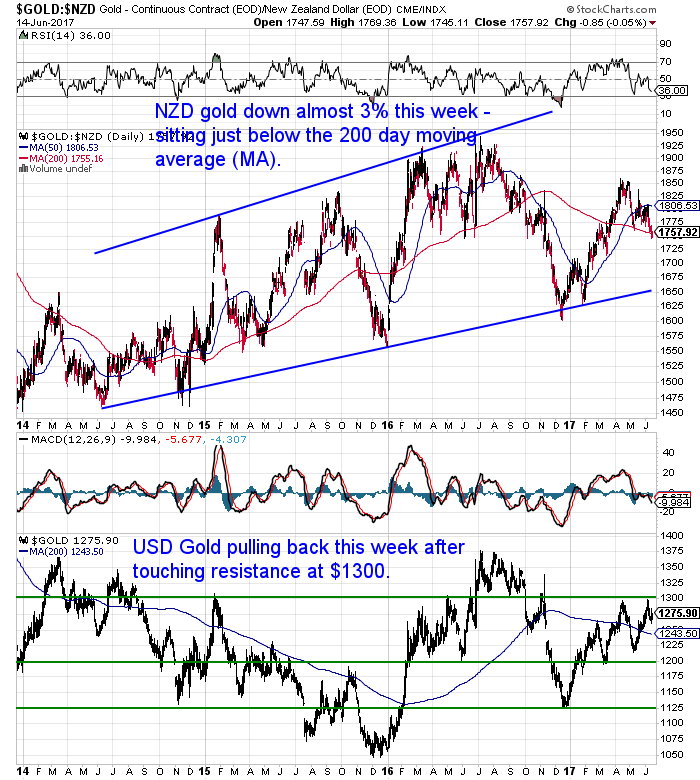 Meanwhile NZD silver has done it even tougher this week. Down 4.65% from a week ago and did get briefly below the low from early May. NZD silver also dipped below the blue uptrend line, but has now bounced back up towards it again.
Silver is also close to oversold territory. So we are likely back into an excellent long term buying zone again around here. 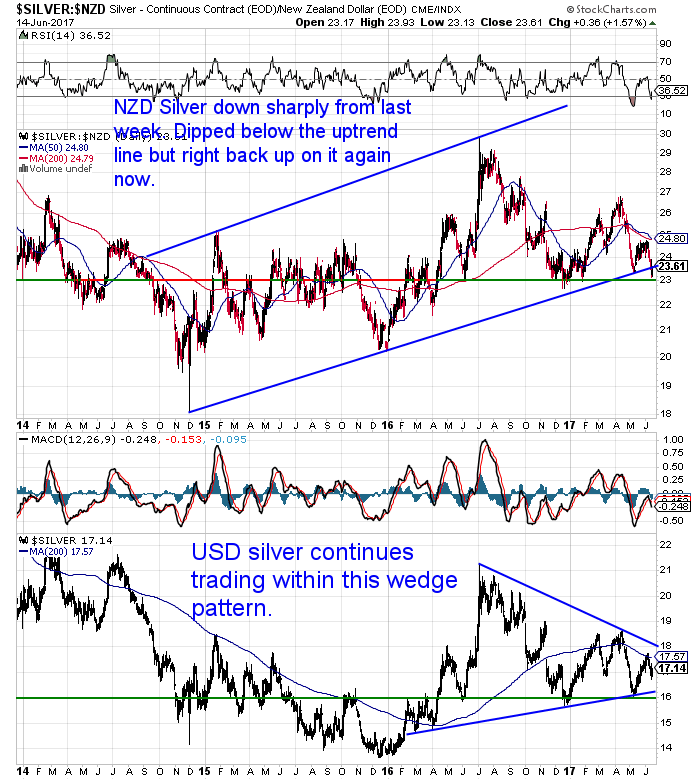 As noted the Kiwi dollar moved even higher again this week. It remains extremely overbought and shot higher this morning as the US Central Bank hiked interest rates again. The NZ dollar looks likely to have to pull back pretty soon. So that adds to the likelihood of gold and silver in NZ Dollars bottoming out around here too. 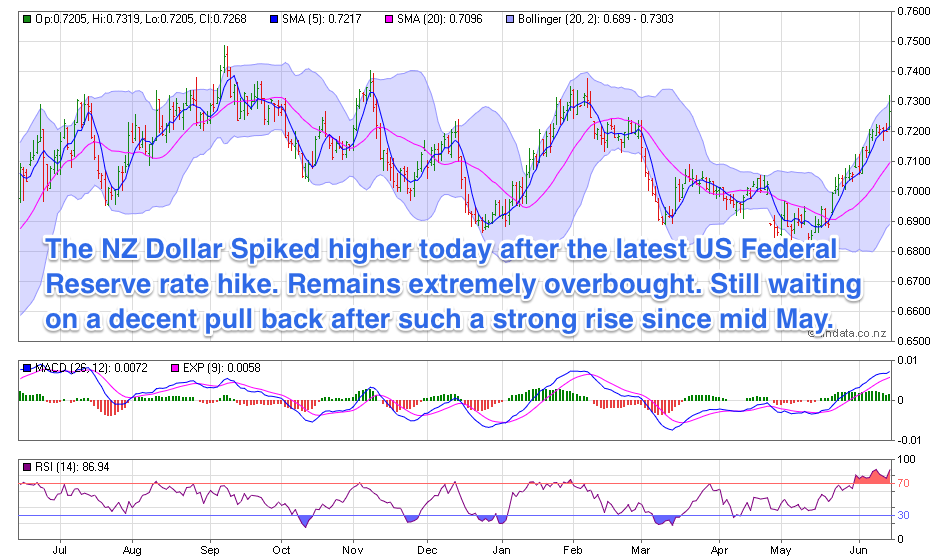 Will Gold and Silver Again Bottom with the Fed Rate Hike?

So the Fed bumped US interest rate a little higher again this morning.
The previous 3 rate hikes have also seen precious metals dip in the lead up to the announcement but then bottom out very soon afterwards. A case of “sell the rumour, buy the news”.
The US central bank previously raised interest rates on 15 March 2017, 14 Dec 2016, and
16 Dec 2015. We’ve marked these dates on the chart below. You can clearly see gold has risen after each of the previous 3 hikes. 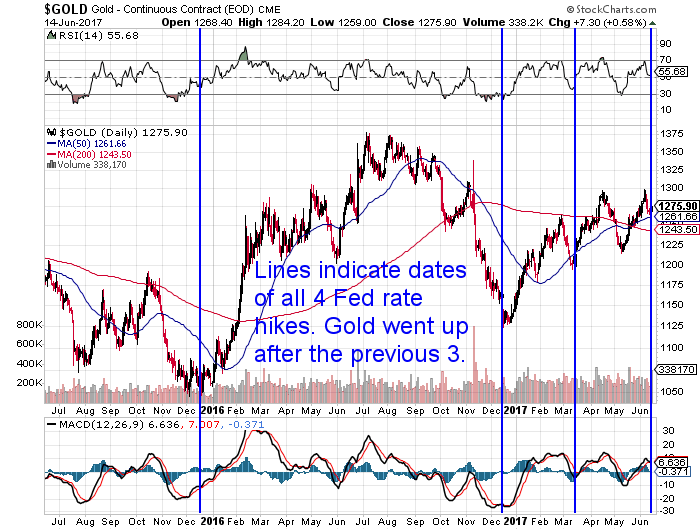 This went against what you’ll read in the mainstream where rising interest rates are meant to be bad for gold.
We have a couple of articles on the site discussing this situation.
First up Jim Rickards reckons:
“Normally, tight money is bad for the dollar price of gold but not this time. That’s because the Fed is not tightening into economic strength, but they’re tightening into economic weakness for the first time since 1937. We can see this in last week’s data. Job growth slowed, labor force participation dropped, inflation dropped, auto sales declined and real wages continued to flat-line.

Gold sees what’s coming next, which is either a recession or something close to it by the late summer.

At that point, the Fed will have to reverse course. They’ll do this through “forward guidance” that signals there will be no rate hike in September.

We got a glimpse of this on May 30 in a speech by Lael Brainard, one of the “Big Four” in the Fed system, along with Yellen, Fischer and Dudley. Brainard said, in effect, that she is a “yes” for a rate hike in June but may be a “no” in September. She won’t be alone.

Brainard is a channel for Bob Rubin, the shadow godfather of the international monetary elite. If Bob Rubin, Christine Lagarde, Larry Summers and others gang up on Yellen as they did in September 2015 (when Yellen postponed the “liftoff”), then September 2017 is off the table for a rate hike.

Gold is the most forward looking of all major markets. With a $1,300 foundation in place and forward guidance in the cards, gold could have an extremely strong second half of 2017.”

See the rest of his theory below including why it’s real interest rates that are so important to track. Not just what the Fed does… 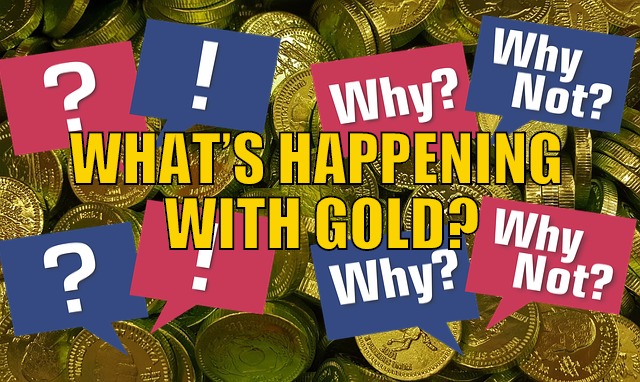 Earlier this week Stewart Thomson also chimed in on inflation and interest rates:
“19. I predicted that gold stocks would bottom against gold when Janet Yellen ended the deflationary QE program and replaced it with rate hikes.

21. Also, as more rate hikes occur, institutional investors will become concerned about their US stock market investments. They won’t necessarily sell their existing holdings, but the US stock market is likely to stagnate as they focus new money on European markets, Asian markets, and gold stocks.”

Check out that article below which also has news on why GST in India is actually good news for gold. 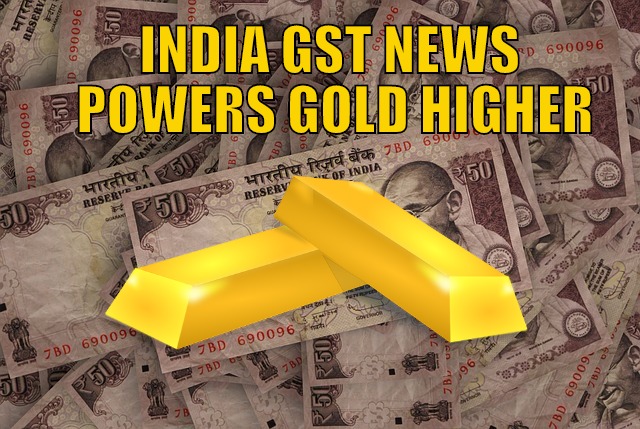 Both metals again look to be in very good buying zones and if the aftermath of previous Fed rate hikes are anything to go by, may not stay here for too long.
Call David on 0800 888 465 for a quote or with any questions. Or just reply to this email. Note: Minimum order is 500 coins.
— Prepared for Power Cuts? —
[BACK IN STOCK] New & Improved Inflatable Solar Air Lantern