Gold priced in NZ Dollars moved higher this week but has pulled back slightly. You can see in the chart below that it did get close to the highs from March. It is currently up close to $300 per oz year to date. 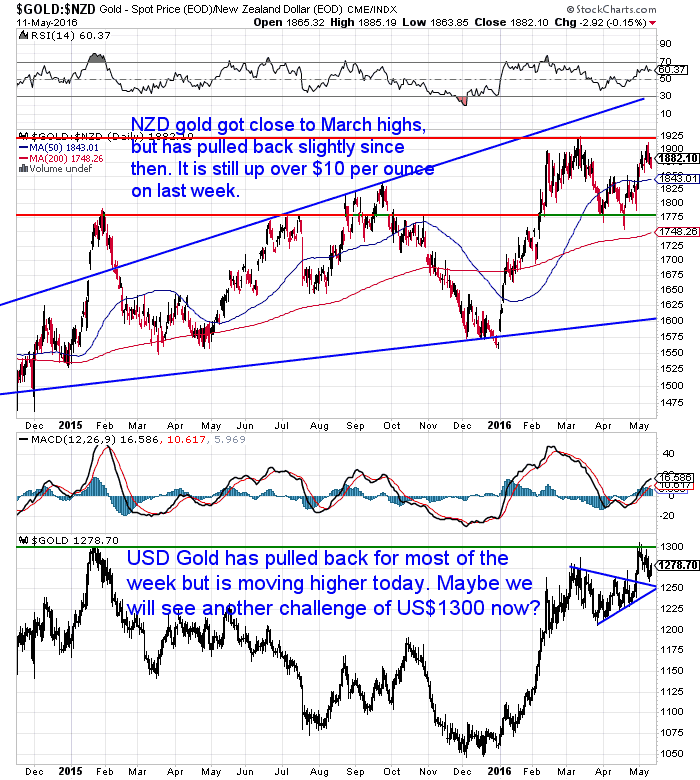 So far we’ve been right on silver. It has been consolidating above the former resistance line of $25. This line is now acting as support and the price is trading between that and $26.

At first glance it looks like a correction should be due, but as we outlined in last week’s feature article we reckon instead we might see an ongoing consolidation at these higher levels. This would get the RSI back down closer to neutral territory of around 50 (see the blue circle in the chart below) and set silver up for a further run higher. 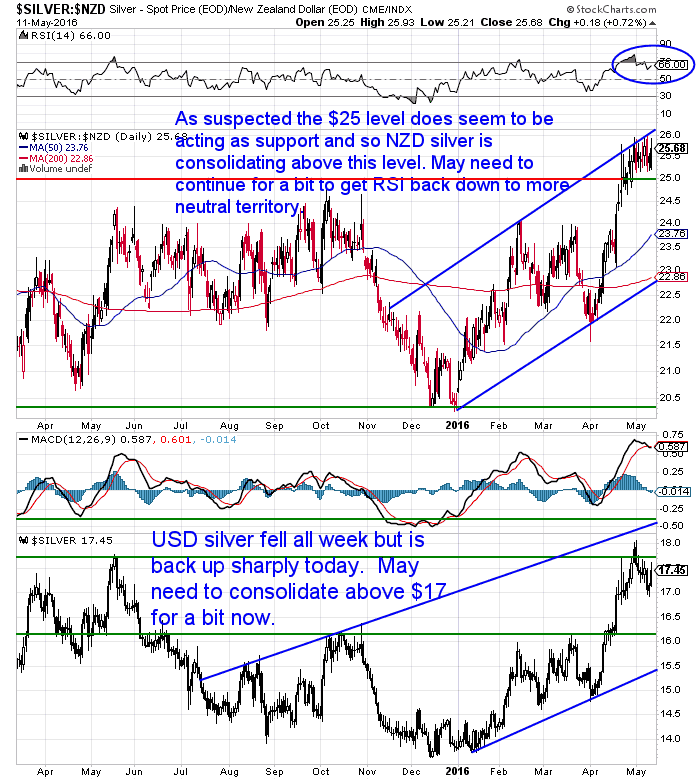 The Kiwi dollar dropped sharply this week and is now due a bounce higher after touching on the lower Bollinger band (blue shaded area). This fall helped hold local prices up in the face of falling US gold and silver prices. 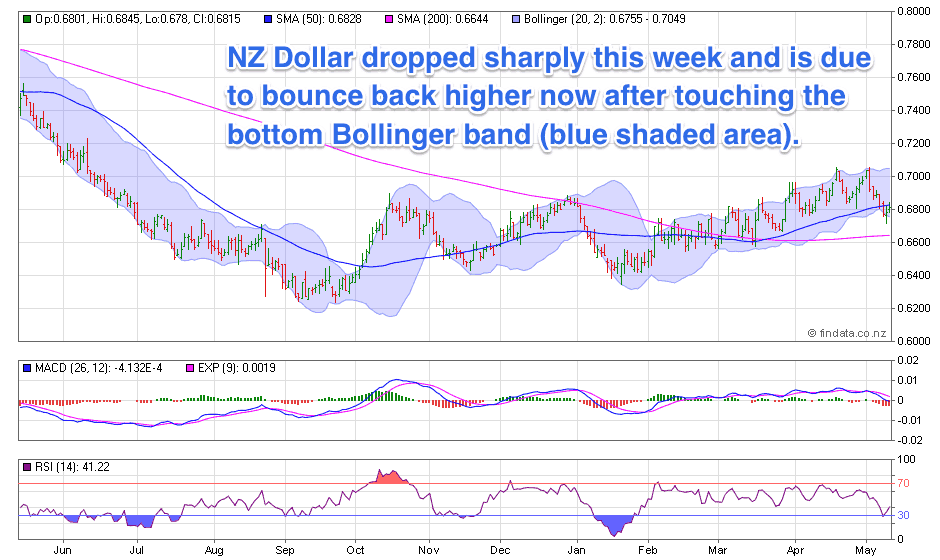 The news this week here was all about whether the Reserve Bank will look at implementing further “macro-prudential tools” like debt to income ratio restrictions to try and counteract their own easy money policies. We counted 5 separate articles on the topic this morning alone in the daily NZ news summary we receive.

The consensus seems to be that the Reserve Bank needs to “do something”, while the government also needs to make it easier to build up and out.

Here’s a different angle on the cause…

Last week we wrote how Ronni Stoeferle thought a lot of institutional money was still on the sidelines for this gold and silver rally. Much of what he had to say backed up with our thoughts that a significant correction right was not that likely. We exchanged a few emails with Ronni asking how things were in his home country of Austria.

We recalled our dinner discussion with him back in 2013 after his presentation here in Auckland where similar things were going on in Vienna to Auckland with house prices moving higher.

He confirmed that “real estate prices over here [in Vienna] are crazy, but if you drive 1 hour to the countryside, they are ridiculously cheap.”

We’d commented how this seemed to be happening in many countries, with the main financial centres seeing rising housing prices. Maybe due to the finance centres being the first to see and make use of the cheap money?

He then reminded us that this is in fact a known phenomenon called the “Cantillon effect” named after after 18th Century Irish-French economist (now there’s a combination ripe for jokes) Richard Cantillon.

“We’re seeing the Cantillon effect (we are describing the consequences in our new book…did you read it?) all over the globe… large financial centers thrive, while the countryside suffers…”

But luckily for us he has a summary of the Cantillon effect on the incrementum website: 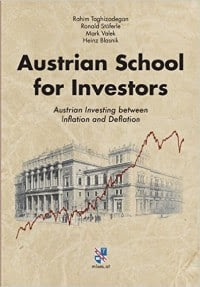 “Inflation is a regressive tax, i.e. the opposite of a progressive income tax. The poorer you are, the greater the burden is. The purchasing power of income decreases, which is why inflation can also be regarded as a redistribution tax. In this context, the so-called Cantillon effect is highly relevant. This effect describes the fact that newly-created money is distributed neither equally nor simultaneously among the population. This means that people handling money partially benefit from inflation and partially suffer from it. Monetary dispersion is never neutral. Market participants who receive the new money early and exchange it for goods benefit in comparison with those who get the newly-created money later. We can see a transfer of assets from late money users to early money users.

Friedrich von Hayek once pictured the cantillon effect with the process of pouring honey into a saucer. The honey dollops in the middle first and only later it spreads out to the periphery. Prices also do not rise evenly. Typically price levels are higher in regions, which directly or indirectly benefit from monetary inflation. If you happen to live in a financial center you may have noticed.”

So could this be the cause of the outlandish real estate prices in Auckland?

Is the “honey” now spreading out from Auckland to the likes of Bay of Plenty? Rather than it just being an Auckland housing shortage?

Or maybe there are just coincidental simultaneous housing shortages in just every financial centre all over the world? Yeah that must be.

How Much Physical Paper Money is in Circulation in NZ vs Total Bank Deposits? 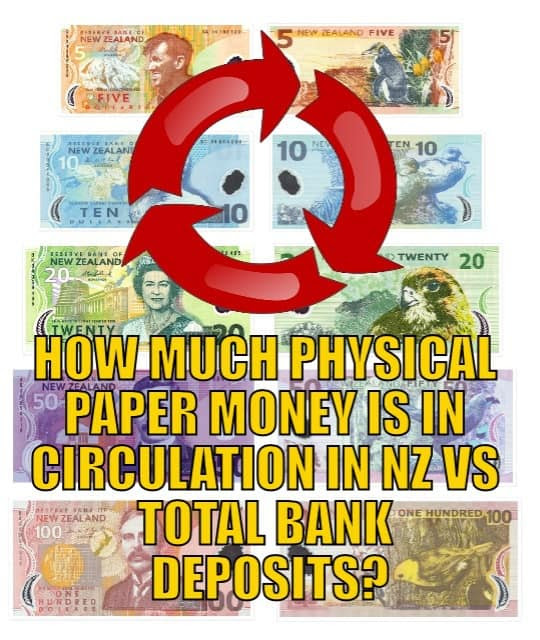 Our feature article this week was inspired by reading some numbers for the USA. This compared physical notes and coins to total cheque and savings accounts to show how likely a bank run could be.

So we crunched some similar numbers for New Zealand. You can read that the link at below along with the original article that got us thinking about it.

How Much Physical Paper Money is in Circulation in NZ vs Total Bank Deposits? 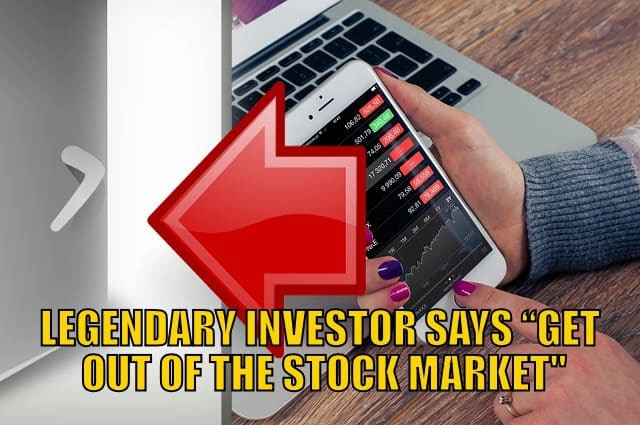 We’ve got an article on the site this which outlines investing legend Stan Druckenmiller’s presentation at the recent Sohn Investors Conference.

The even shorter summary of his speech is the title of the article itself:

Legendary Investor Says “Get Out of the Stock Market & Buy Gold”

“Billionaire hedge fund manager Paul Singer said that gold’s best quarter in 30 years is probably just the beginning of a rebound as global investors — including Stan Druckenmiller — weigh the ramifications of unprecedented monetary easing on inflation. “It makes a great deal of sense to own gold. Other investors may be finally starting to agree,” Singer wrote in an April 28 letter to clients. “Investors have increasingly started processing the fact that the world’s central bankers are completely focused on debasing their currencies.”

The Daily Bell neatly summarised the jist of these 2 articles with this:

“When it comes to gold, then, there are two salient facts.
First, the stock market is seven years old.Second, central banks are obsessed with liquidity as they try to create price inflation and economic recovery.This is one of those times when circumstances proclaim a given trend in an emphatic manner.Conclusion: One way or another, sooner or later, it is gold’s time (and silver’s). And maybe that time has already begun.”Source.

The Daily Reckoning reported another surprising addition to the ranks of gold bulls.

“Kenneth Rogoff, Harvard professor, chess grandmaster and author of the widely acclaimed book This Time Is Different, just sent shock waves through the global elite by recommending that emerging-market central banks buy gold to diversify their portfolios away from dollar holdings.

The super rich and the elites are now selling stocks and buying gold. And for good reason. Gold has fundamental support from Chinese and Russian efforts to get away from the dollar system. It also has technical support from scarcity on the physical supply side. Gold is flying off the shelves.

When elites say dump dollars and buy gold, what are you waiting for?”

As we’ve discussed before it is in the paper markets of the New York (COMEX) and London (LBMA) where the price of gold and silver are still set. So with well known hedge fund managers starting to sing its praises it makes sense that the price is rising as these guys aren’t buying from bullion dealers like us but rather with ETF’s and futures.

While we are noting more buying interest lately, we have also seen a spike in people wanting to sell bullion they’ve bought previously.

Note: If you’d ever like a price to sell bullion back to a refiner just visit this page and we can get you a price.

Of course we don’t know the reasons people are selling. It might be they all just coincidentally need the funds for something else. However perhaps a more likely reason is that many people still don’t believe the current rally in gold and silver can last? So they are selling into strength on the expectation that prices will fall again.

Could this well be a contrarian indicator that the price rises are just getting started?

If you believe this is true and would rather be a buyer than a seller right now, then get in touch.

If the demand in Canada and the US continues then we could well see the premiums on the likes of Canadian Silver Maples start to rise in the coming weeks and months. But for now they haven’t and delivery remains about 7-10 business days on boxes of 500 x 1oz Canadian Silver Maples delivered to your door via UPS, fully insured.