The bounce back we mentioned last week might be due, did indeed take place.

Gold in NZ Dollars dipped briefly down below the 200 day moving average line to around $1750 before bouncing sharply higher. This rise was dampened today by the sharp rise in the Kiwi dollar following the announcement that the RBNZ was keeping interest rates on hold at 2.25%. 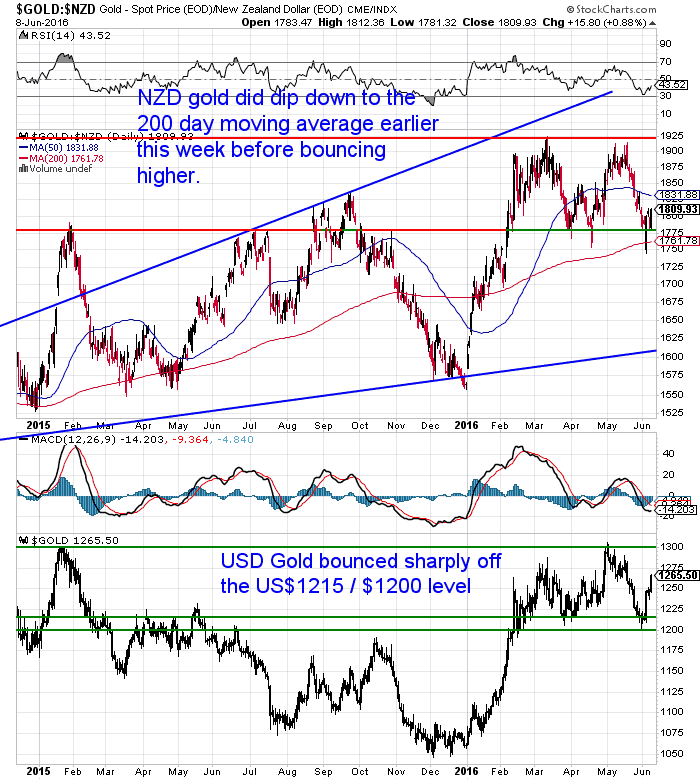 Likewise silver dipped lower almost to the 200 day moving average, but it also touched the blue uptrend line before staging a comeback. Today, even with the higher Kiwi dollar, it is still up 2.68% from last week. 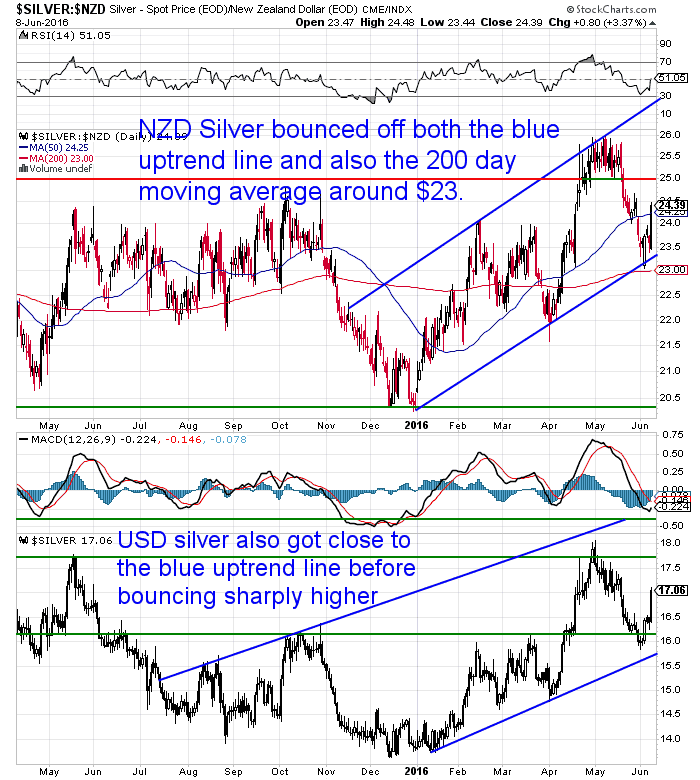 You can see that after the sharp rise in the NZ Dollar it is looking over-extended now. It is well outside the upper Bollinger band and also into overbought territory on the RSI indicator (bottom of the chart). So odds are we will see a retracement of recent gains in the coming days. 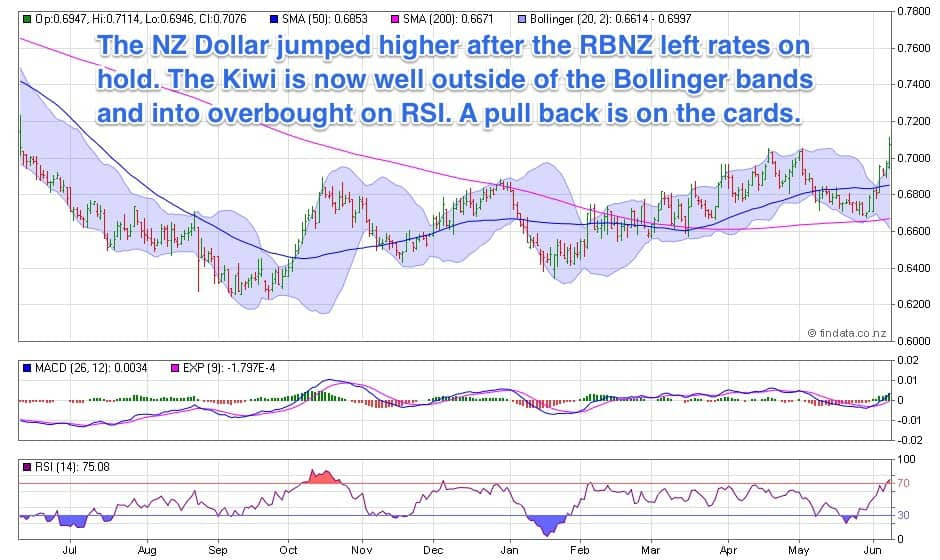 This may well in turn give a boost to local gold and silver prices (a weaker Kiwi buys less gold and silver). But the trend in the Kiwi does seem to be a slow steady rise higher still.

So we’ll stick by our call from the start of the year that gold and silver in NZ dollars won’t “rise” as much as the US dollar prices this year.

Perhaps we’ll see gold continue its sideways consolidation between $1750 and $1920 for a while yet. Silver in turn could do the same between $23 and $26.

We’re still betting both metals are back in long term uptrends though. So before long we reckon we’ll see them break out higher again. That’s our 2 cents worth anyway for what it is worth. But given it’s free, it might not be worth much!

RBNZ Between a Rock and a House

We’ll admit we stole that headline from an ASB email, but it sums up where the NZ Central Bank is currently.

(Here’s a link to a summary of todays interest rate decision if you must.)

They think they need to cut interest rates to boost inflation. Because low prices are the enemy of central banks the world over. Never mind that their policies actually seem to be causing people to save more and spend less.

But with house prices continuing their seemingly unstoppable ascent they don’t want to give them further reason to rise.

So for now they sit on the fence and see what happens. Odds are they’ll do something soon enough – because that’s what central planners do.

Probably further “macro prudential tools” will be pulled out of the hat in coming months with the aim of cooling house prices, as this will then supposedly let them cut interest rates further.

You do one thing that you know has a negative effect, then do something else to negate what it is you’ve just done.

That seems to make sense to the bank economists from what we’ve read. But stuffed if we can fathom it.

The New Zealand economy will just continue to get more and more imbalanced, just as is happening everywhere else in the world.

We stick by our solution to high house prices from a few weeks back.

“So probably the solution to high prices are… even higher house prices!

Well contrary to popular belief, they can’t keep rising forever. Eventually the prices will get too high for anyone else to buy them. When the easy capital gains cease odds are many will sell and cause an oversupply on the market. Result: Lower prices.”

Can You Get Insurance on Your Insurance? 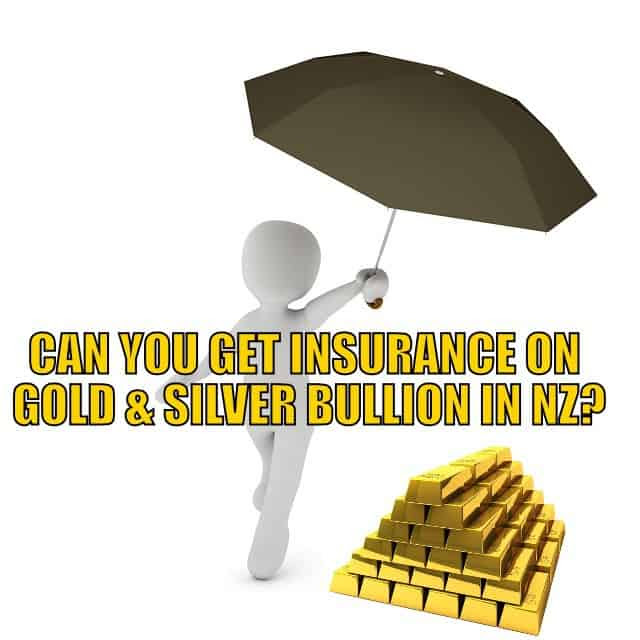 A question we’ve often had is can you get insurance on gold and silver bullion in New Zealand?

So we sat down and put digital pen to digital paper and recorded what we know on the subject for this weeks feature article. It’s not a straight forward yes or no answer by any means and depends chiefly on where and how exactly you store your precious metals.

If you’re considering buying physical gold and silver, then you should also be considering where and how to store it. So you’ll also learn about that…

Can You Get Insurance on Gold and Silver Bullion in New Zealand?

We’ve got a couple of other articles on the site this week too. Plus a short video interview with Grant Williams which is worth a look. So just scroll down the page and you’ll find the links to all them.

What? A Central Banker Recommends Gold?!

A month ago we noted that another surprising addition to the ranks of gold bulls.

Establishment economist and former chief economist of the IMF, “Kenneth Rogoff, Harvard professor, chess grandmaster and author of the widely acclaimed book This Time Is Different, just sent shock waves through the global elite by recommending that emerging-market central banks buy gold to diversify their portfolios away from dollar holdings.”

We now have another surprising addition to the ranks of gold proponents.

The latest World Gold Council Gold Investor magazine  features none other than Mervyn King, Governor of the Bank of England from 2003 to 2013. He discusses global economic prospects, the limits of monetary policy and the role of gold in a world dominated by ‘radical uncertainty.’

Here’s is the most surprising quote of the week – maybe the year even:

“If we don’t quite know what the future holds, there is little point in getting carried away by very fancy mathematical calculations of optimal portfolios. Don’t rely on past data to be a good guide. Try to think through what mix of assets gives you the best chance of surviving some big event. That must mean including assets that are negatively correlated or uncorrelated in your portfolio. And I am very struck by the fact that over many many years, central banks, governments and individuals have always, despite the protestations of economists, held some gold in their portfolio.”

Now when we see these card carrying members of the establishment talking up gold, that is likely a sign that the shackles have been loosened from gold’s ankles.

So it should not be a surprise that we are seeing the price move slow but surely higher again.

Silver still continues to lag gold overall even after some sharp rises of late. It perhaps remains the bet with the most upside still. But both metals would seem to have much lower downside than many other assets available globally.

Get in touch if you have any questions about adding these “negatively correlated or uncorrelated” assets to your portfolio.

One thought on “What? A Central Banker Recommends Gold”