The Kiwi Dollar has been the dominant factor this week. It has shot up over 2 cents for a 3.38% gain from last week. It is now getting overbought (above 70 on the RSi indicator) so a pullback soon is now likely. But as you can see in the chart below it is still well below its 200 day moving average (MA), so far too early to call a change in trend yet. So at this stage still an overdue bounce. 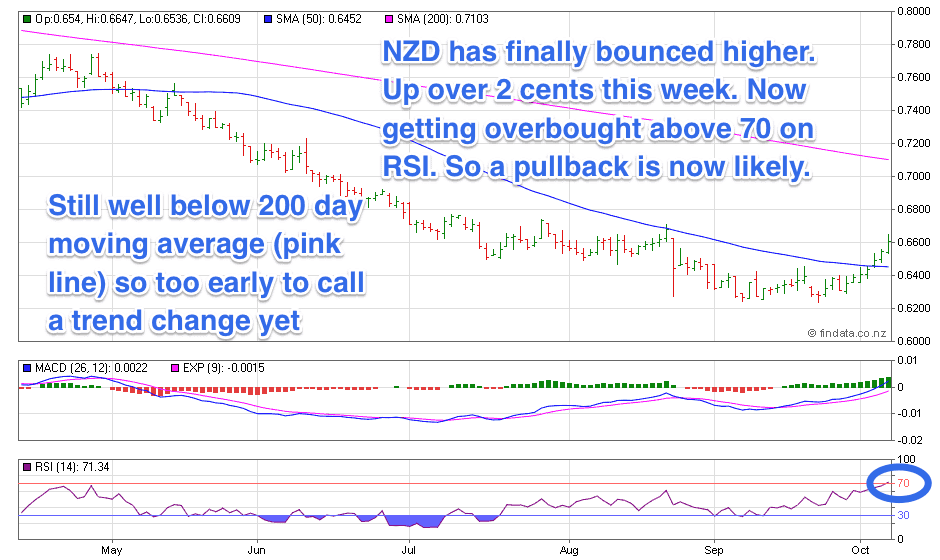 The stronger dollar has nullified any gains in NZD gold. You can see in the chart below where the top portion is gold in NZ dollars that we have actually fallen slightly from last week. Whereas the bottom part shows in US dollars gold has actually continued to move higher. 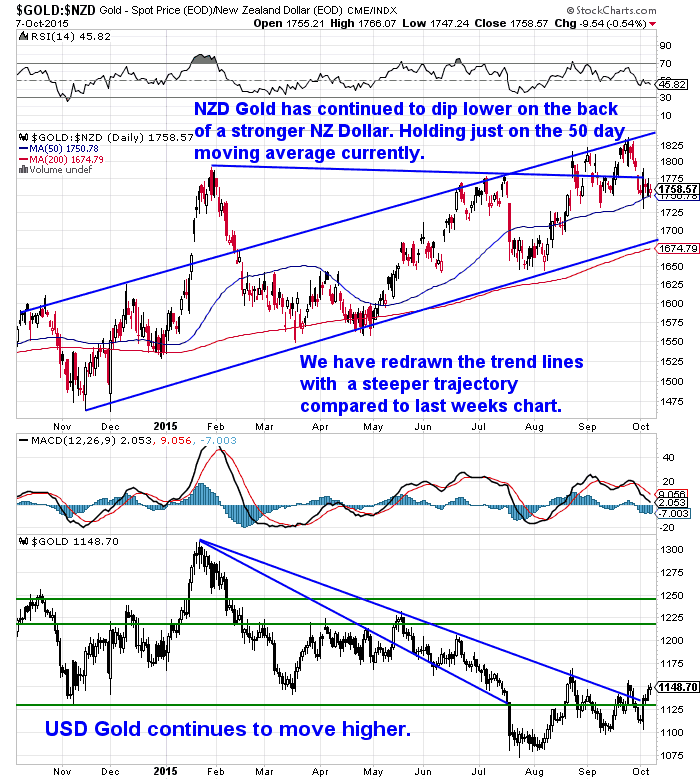 However gold in NZ dollars remain in a firm uptrend. We’ve actually redrawn the trend channel lines on the NZD Gold chart below to reflect the steeper trajectory that NZD gold is now in.

Taking a longer term look at NZD gold shows we are now approaching key long term resistance levels. In what is a rather symmetrical looking chart, NZD gold has risen steadily out of the lows of last year. It is approaching the high from mid 2013. this coincides with the downtrend line since the all time high of NZ$2350 from 2011.

If it gets above these that is further confirmation of a change in trend. 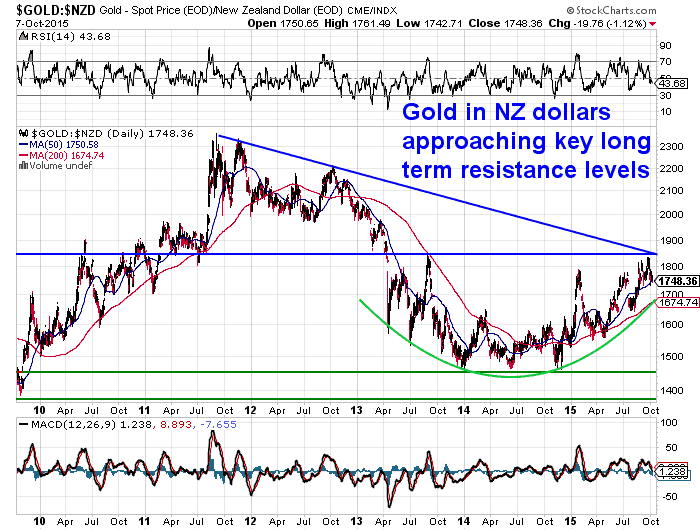 The stronger Kiwi dollar couldn’t put a halt to the massive gains in NZD silver though. Up just under 7% this week. While silver rose over 10% in USD terms.

Looking at the silver chart, after such a sharp run higher it will be due to take a breather pretty soon. 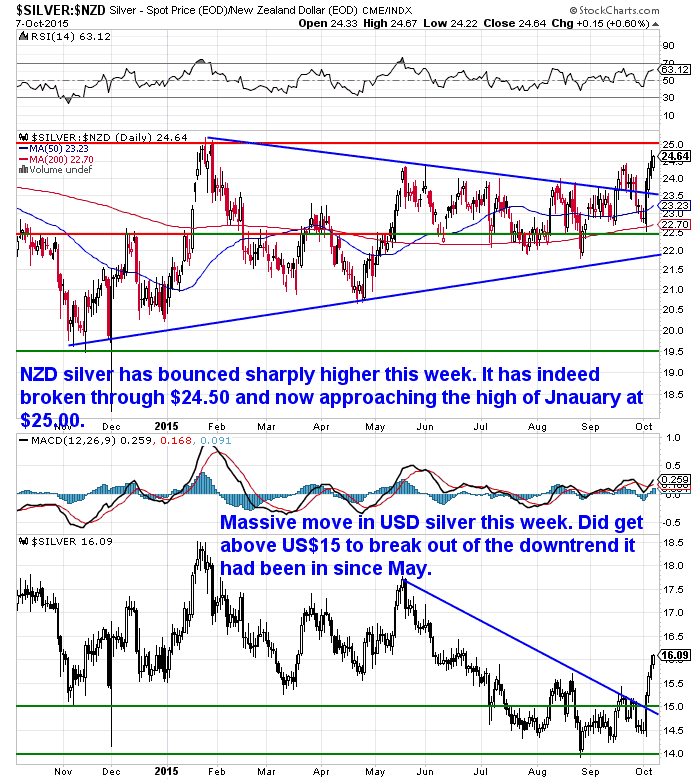 Well the NZ Dollar may well play a role in that. If it is changing trend and moving higher then that will put a damper on precious metals prices here in New Zealand.

However if the Kiwi does move higher, this will likely mean the US Dollar is moving lower. Hence gold and silver will likely be moving higher as they have done this past week in their often inverse relationship to the US Dollar.

All we can say is that it appears both metals are in uptrends in NZ dollar terms.

Why the Massive Move in Silver?

The latest numbers we saw in US Comex futures indicated that the ‘money managers’ group trimmed their bullish bets a bit, but they added almost 19% more bearish bets.

These numbers were from just before the run up began. So this points to a short squeeze. When the price turned higher instead of going lower as they expected, they were forced to cover their bearish bets propelling the price sharply higher.

What Prompted the Initial Move Higher?

Seems the very poor US jobs numbers report overnight Friday NZ time may have been a good a reason as any and the initial trigger.

Gold Miner Seabridge Gold publishes some good commentary regularly. This is what they had to say on the US jobs report:

“What does the jobs report mean?To us, today’s job report has three implications which should be important to gold and may represent an important inflection point for markets generally.

First, financial markets may now begin to interpret bad news as bad news. Until now, bad news has generally been interpreted positively because it meant that the Fed would delay rate hikes. This shift in perception is the mark of a bear market.

Second, this may be a signal that the US is now entering the same recessionary economic environment that has infected the rest of the world. Decoupling of the US from the rest of the world can now be seen to be a ridiculous proposition. The world’s economies and financial systems are intimately interconnected.

Third, and most important, investors are now beginning to question the credibility of the Fed. Are their policies a failure? Why are their economic projections always so wrong? Do their models reflect a dependence on wrong economic theory, such as the purported impact of low interest rates? Does the Fed know what it is doing? These questions are now being asked and this is the key to better performance for gold.

It is the market’s irrational confidence in the Fed that has elevated equities and depressed gold. Yes, the liquidity unleashed by the Fed has driven stocks higher but only because investors believed that the Fed would succeed in achieving its objectives of faster economic growth, normalization of monetary policy and higher inflation.

What happens now? We continue to expect that we will see more Quantitative Easing before we see a Fed rate hike. And we think that a new round of monetary stimulus will do much more for gold than equities because markets are losing confidence in the Fed.”

Their argument makes sense to us. More stimulus from central bankers seems more likely than less to us still too. 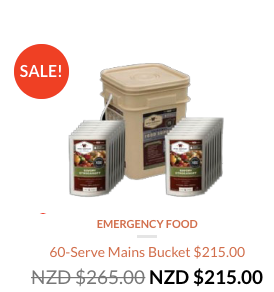 Speaking of how gold might do versus equities (shares), here in NZ we had a comment from someone this week that he was thinking of selling some shares. As he thought it might be a good time to offload some and exchange them for silver. 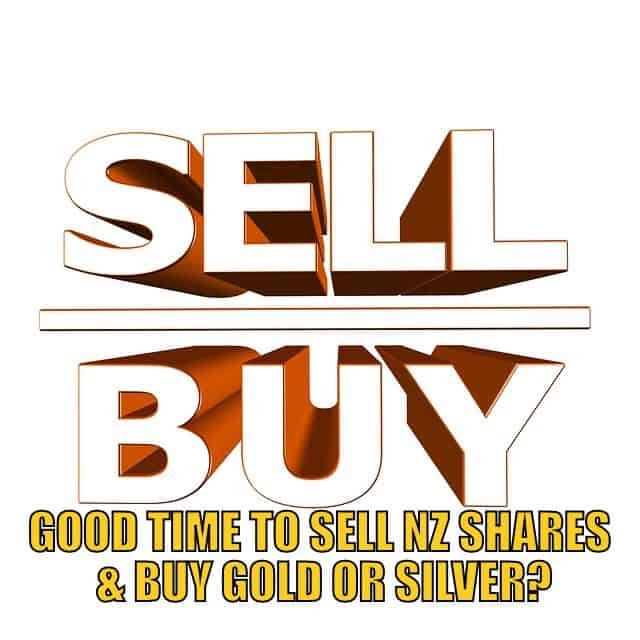 That got us thinking, we haven’t had a look at the NZ sharemarket for some time.

So this weeks feature article came about.

Also on the website is an interview with someone we’ve learnt a lot from over the years, Sandeep Jaitly. Both via his writings but mainly in person at a few events we’ve attended. 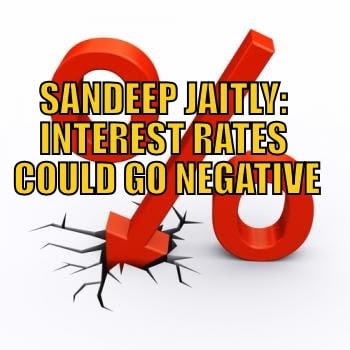 This week he was interviewed by the often annoying Max Keiser.

They spent some time discussing the implications of interest rates going negative. Something we’ve devoted a bit of digitalink to in recent weeks.

Sandeep also discussed how China might well have chosen a very opportune moment to offload some US treasuries and buy gold. This Zerohedge article backs up that assertion.

Yet More on Negative Interest Rates

Economist and author Kenneth Rogoff is also unfortunately keen on negative interest rates. From the pen of one of our favourite writers Bill Bonner:

“Rogoff did some good work, along with Harvard colleague Carmen Reinhart, in their book This Time Is Different: Eight Centuries of Financial Folly. They showed that, throughout history, high levels of debt have gone hand in hand with low economic growth.We’d add that debt as a percentage of GDP has a habit of growing faster and faster – until the whole thing blows up…

He has a solution! But not the obvious one – letting Mr. Market sort it out. Instead, he wants to make cash illegal…

No vote in Congress is necessary… no lobbying… no horse-trading… no smoke-filled rooms – none of the messiness of modern pseudo-democracy.

Instead, the bald-headed, gray-bearded PhDs will simply make it part of banking regulation. Like a drone attack on a suspected terrorist, no questions will be asked!”

However, we wonder if this whole negative interest rate thing will work as planned though?

For example, QE seems to have been deflationary instead of inflationary. All the cheap money has encouraged over-investment as well as keeping zombie companies alive that should have gone bust. Hence the oversupply in things such as oil and therefore falling oil prices.

So perhaps negative interest rates won’t do as planned either?

The theory is charging people for the privilege of keeping their money in a bank will force everyone to rush out to spend the money instead. Because of course everyone knows that we all get richer via consumption and spending don’t we!

However maybe this will scare people into being much more careful with their money?

It may promulgate the very thing the central bankers are trying to stop – saving!

Just in case negative interest rates aren’t enough though, we revert back to Bill Bonner, who looks at another arrow that the Central Bankers may yet pull from their quiver of monetary craziness:

“Etsuro Honda, a special advisor to Mr. Abe and often described as an “architect” of Abenomics.…now proposes more QQE (for “qualitative and quantitative easing”).

The idea behind Japan’s quantitative easing was to INCREASE the quantity of money in the system so as to DECREASE the quality of each unit.

It was expressly meant to devalue the yen so that consumers would want to get rid of their currency faster. QQE makes no sense… even in the perverse terms of modern central bank meddling.

But wait. There’s more. Honda says it will be accompanied by a “supplementary budget, focusing on the real income shortage of mid- and low-income households.”

Right now, this proposed extra spending is being funded out of taxes. But support is growing around the world for such spending to be funded by “People’s QE.”

The idea behind “People’s QE” is that central banks would directly fund government spending… and even inject money directly into household bank accounts, if need be.

And the idea is catching on.

Already the European Central Bank is buying bonds of the European Investment Bank, an E.U. institution that finances infrastructure projects.

And the new leader of Britain’s Labour Party, Jeremy Corbyn, is backing a British version of this scheme.

Ah-ha! That’s the monster coming to towns and villages near you!

Call it “overt monetary financing.” Call it “money from helicopters.” Call in “insane.” But it won’t be unpopular.

Who will protest when the feds begin handing our money to “mid- and low-income households”?

We wait. We watch. We wonder how the Japanese will attempt to bring back to life the economy they have worked so hard to kill.

And now, all over the world, central planners, bankers, and politicians are watching too.

“Where goest the Bank of Japan, there too I shall go,” they tell themselves.”

Our Central Bank may be slightly less nutty than some of the others out there. But with interest rates falling here too, it seems they are singing from the same song sheet. Just at a lower volume for now.

In the end the central planners will likely get their way and destroy the value of their currencies.

Better to be early than late and ensure you have some financial insurance beforehand.

Todays price for a box of 500 x 1oz Canadian Silver Maples is $15,239 fully insured and delivered. Delivery is now about 3 weeks away.