Silver has underperformed gold this week

Down in both NZ and US dollar terms, while gold is up as can be seen in the table above. 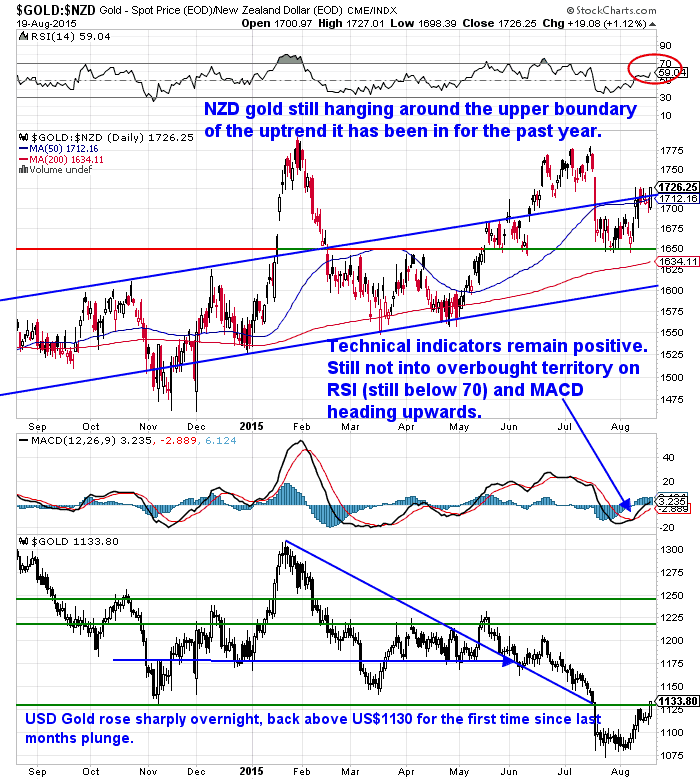 Gold in NZ dollars is holding around the upper boundary of the uptrend it has been in for over a year now. Also sitting right on the 50 day moving average. The technical indicators suggest it could be looking to test the $1775 level for the third time this year.

US Dollar gold is today back above the US$1130 level so it could well be heading higher. This would likely pull the local gold price higher too, if the NZ Dollar continues to drift around the same level as it has done lately (more on that soon).

As noted already silver has underperformed gold this week. In NZ dollars it remains within the narrowing wedge formation. So before too long it will have to break out of this as the price movements get narrower and narrower. 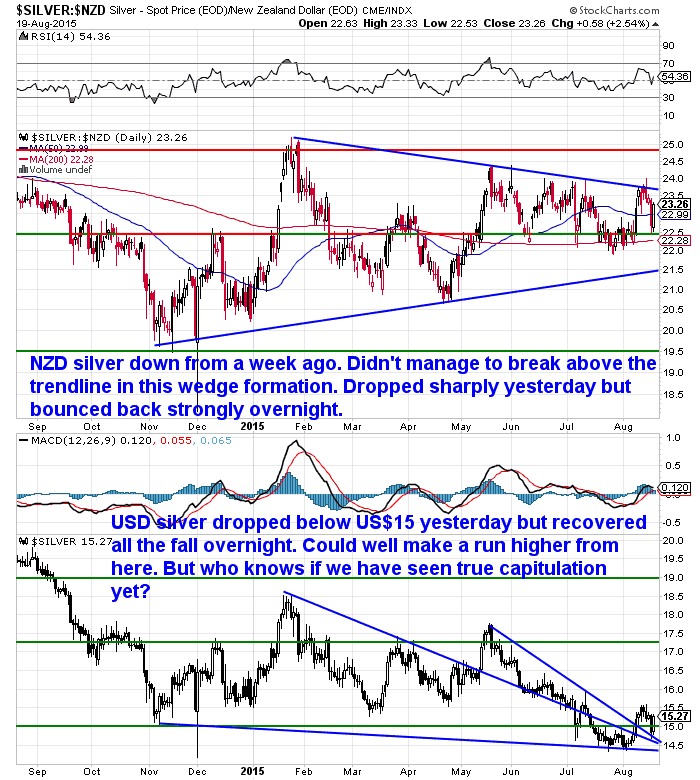 It did drop sharply yesterday but bounced back strongly overnight in the US to regain all those losses. 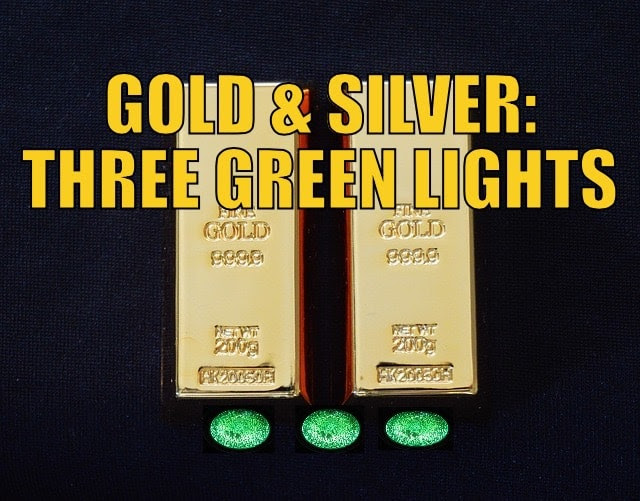 Interestingly this followed a pattern that Stewart Thomson guessed at in one of the articles posted on the site this week. Check that out for his take on why silver will rise when the Fed raises rates in September. Our view remains that a September rise is unlikely – more on that later too.

As noted earlier and can clearly be seen in the chart below the NZ Dollar has been building a bit of a base around the 65 cent mark.

On one hand this could point to it heading higher. The consensus still seems to be that the US Dollar will keep rising. But at some point that consensus will be very wrong. It’s just hard to know if we’re there yet.

However the NZ dollar hasn’t risen higher yet even though the technical indicators are heading higher. 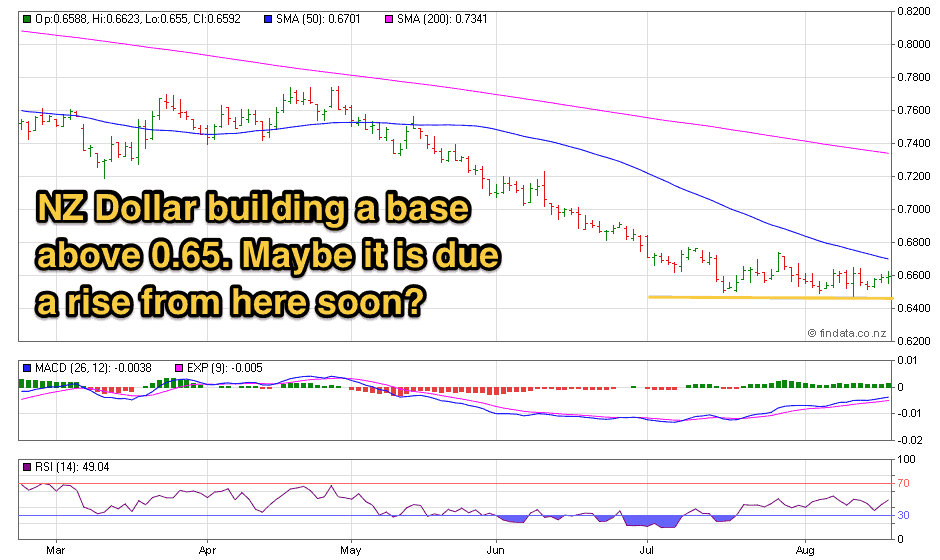 Another factor that could boost the Kiwi, or at least stop it falling too much more, was word overnight that was taken to mean the chance of the Federal Reserve raising interest rates in September is not as likely.

The US dollar index, which measures the greenback against a basket of currencies, dropped after the release of the minutes, which cited concerns about weak wage inflation and oil prices.

Futures show traders pared back their expectations the Fed will raise rates at its September meeting to about a 38 per cent chance, down from about 50 per cent earlier in the day, according to Bloomberg.”

This has been our position for some time, that they’ll just keep talking about raising rates without actually quite pulling the trigger.

Plus with the Chinese Yuan looking likely to keep falling a bit further yet, an even stronger US dollar won’t help US exports when many US companies are already reporting lower earnings as a result of struggling overseas sales.

So that will be another reason why the Fed will likely not raise rates next month.

The flip side argument is that they may well do it in order to send the US stock market lower. A crash would give them the excuse to restart a money printing program.

Why New Zealand Needs to Appreciate Our Banks

We wondered if this was a tongue in cheek comment at first read. But no it seem we really should be grateful to banks for giving us “the most valuable weatherboard houses in the world” according to a St Peter’s College Economics teacher! Crikey. More like most overvalued we would have thought!

Discussing why a Labour MP is wrong about banks excessive profits he argues:

“People like Mr Shearer need to appreciate what the banks have done for us. They have helped give us some of the most valuable weatherboard houses in the world. Their lending in the past few decades has provided the funding to unleash the true value of our old villas, bungalows and townhouses in suburbs as diverse as Grey Lynn, Glen Eden and Mangere. It is amazing that our parents often lived in exactly the same houses but didn’t realise their true value. Sadly during their era the wonder of financial markets and bank lending was fettered by government controls. Banking was boring and houses were affordable.

We may pay 17.5 per cent on our credit cards to afford our groceries , electricity, petrol, insurance and rates but at least we live in expensive houses.

Some commentators have expressed concern that the banks will not stand by our dairy farmers during these difficult times as world dairy prices plummet. History shows that banks are renown for their benevolence in lending during boom times. This tends to amplify the boom. Unfortunately their benevolence abates rapidly during the tough times. Let’s hope this time is different.
Source.

This really is a sign of the (over-indebted) times when we are told we should be thankful for overvalued housing and the government mandated monopoly banks that have helped enable it! 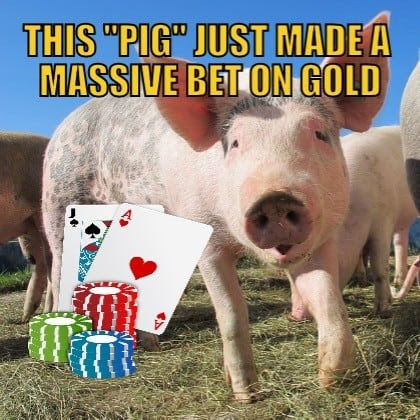 Hedge fund manager Stan Druckenmiller just bought $300 million worth of SPDR Gold Trust (GLD), an ETF that tracks the price of gold. It’s a huge bet, even for a big-time trader like Druckenmiller.

Check out this article on the website for his rationale for putting 20% of his fund’s money into this trade. It’s his largest position…

This “Pig” Just Made a Massive Bet on Gold

Have you noticed a few more articles in the mainstream media lately about the chance of further rain clouds ahead for the global economy?

We’ve picked up on the odd one, after seeing the likes of the Bank for International Settlements (BIS) issuing warnings for quite some time now. (The BIS is the central bank of central banks who issues directives on things like capital adequacy. And who is likely the “string puller” for the entire planet).

This Alt-Market article outlines how this is likely an indication that trouble is getting closer:

“This alteration in rhetoric from the mainstream may not necessarily be due to an awakening in the media. Rather, it may be due to the new narratives being put forth by core banking elite institutions like the International Monetary Fund and the Bank of International Settlements, institutions that have established a mission to appear competent in the wake of an economic crisis they KNOW is about to be triggered. The IMF is consistently making statements regarding potential disaster in global markets due to central banking stimulus measures (which it originally championed), as well as potential rate hikes, sending mixed messages to devout mainstream followers. The IMF’s latest overviews of global markets have been far gloomier than mainstream media outlets until recently. Suddenly, it would seem, the media has been given direction to parrot internationalist talking points.

The BIS warns that the world is currently defenseless against the next market crisis. I would point out that the BIS has a record of predicting economic crashes, including back in 2007 just before the derivatives and credit crisis began. This ability to foresee fiscal disasters is far more likely due to the fact that the BIS is the dominant force in global central banking and is the cause of crisis, rather than merely a predictor of crisis. That is to say, it is easy to predict disasters you yourself are about to initiate.

It is no mistake that the warnings from the BIS and the IMF tend to come too little too late, or that they are beginning to compose cautionary press releases today that sound much like what alternative analysts were saying a few years ago. The goal of these globalist organizations is not to help people prepare, only to set themselves up as Johnny-come-lately prognosticators so that after a collapse they can claim they warned us all, which can then be used as a rationalization for why they are the best people to administrate the economies of the planet as a whole.

So now that the mainstream is willing to report on clear economic dangers, what happens next?

The change in the MSM narrative is a bad sign. The initial media coverage of the derivatives implosion in 2008 did not become negative until we were well within the shadow of the avalanche. If the same holds true today, then a market event is imminent…

Economic news is moving extremely fast this year, and it will only become more frenetic as we close in on 2016. The general consensus among alternative economic investigators seems to be that 2015 will be the year for trigger events and dead fantasies. In my six part series entitled ‘One Last Look At The Real Economy Before It Implodes’ I essentially agree with this timetable. If 2014 was the new 2007 with all its immediate warning signs, then 2015 is the new 2008 with all the chaos and broken paradigms.”
Source.

So buckle up as things might be close to getting even more interesting in the coming months.

Rather than relying on Central Banks to do the right thing, start you own “Central Bank of You”. Have some “reserves of gold and silver. (Don’t forget a bit of actual cash too just in case. Bill Bonner outlines why you should have some cash on hand here.)

We can’t help you with the cash but we can help with the gold and silver. Get in touch for a quote or to have any questions answered.