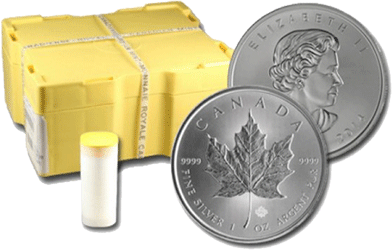 $14,680 for 500 x 1oz Canadian Silver Maples fully insured via Fed Ex directly to you anywhere in New Zealand or Australia.
+ Free Glove Box Survival Kit valued at $69 with any order of 500 or more 1oz silver coins. 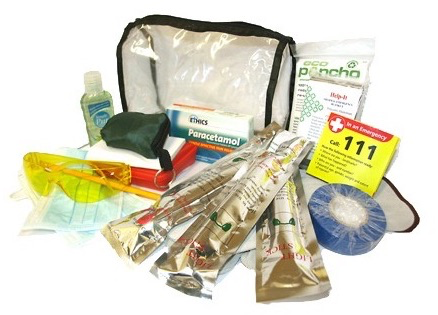 Looking like an excellent time to buy today as silver looks to have bottomed out.
Read on to hear about that…

The bottom in silver we have been watching for looks to have arrived this week. And gold may well have also bottomed out during the past few days. NZD gold is up 2% from a week ago. Bouncing off the 200 day moving average (MA) around $1760. 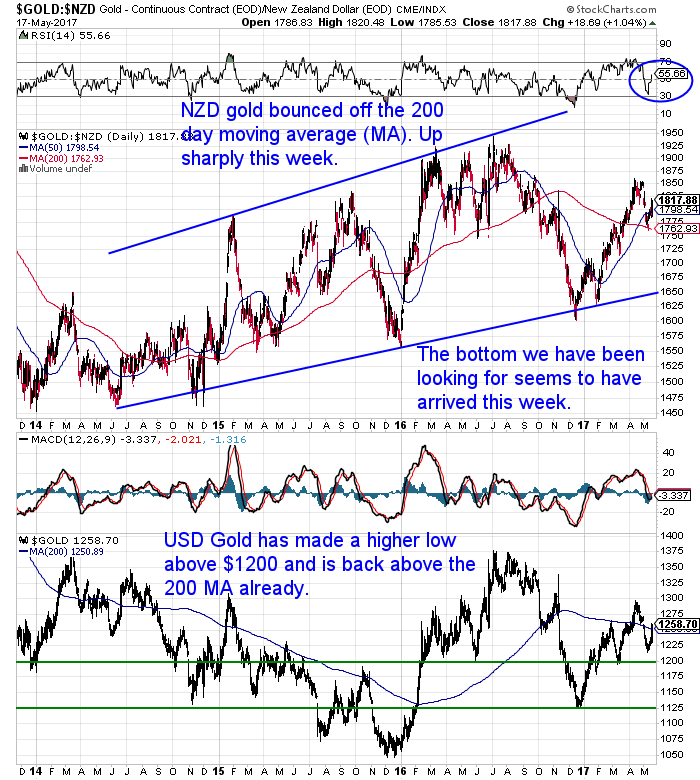 As we suspected it might last week, silver in NZ dollars bounced off the rising blue trend line. NZD silver is up 3% from last week. Our feature article today looks at the technicals for NZD silver so no need to comment further on that here. 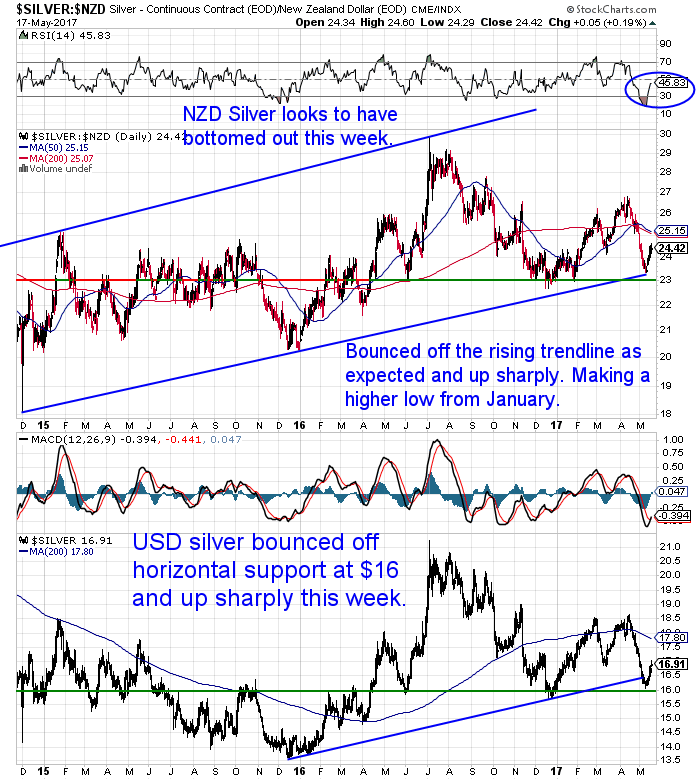 The Kiwi dollar has taken the shine slightly off the rises in the metals. As it is also up around 1 cent from a week ago. But we wonder whether it will be able to sustain this rise at the moment. As the NZ dollar has failed to get above the 50 day MA since March. 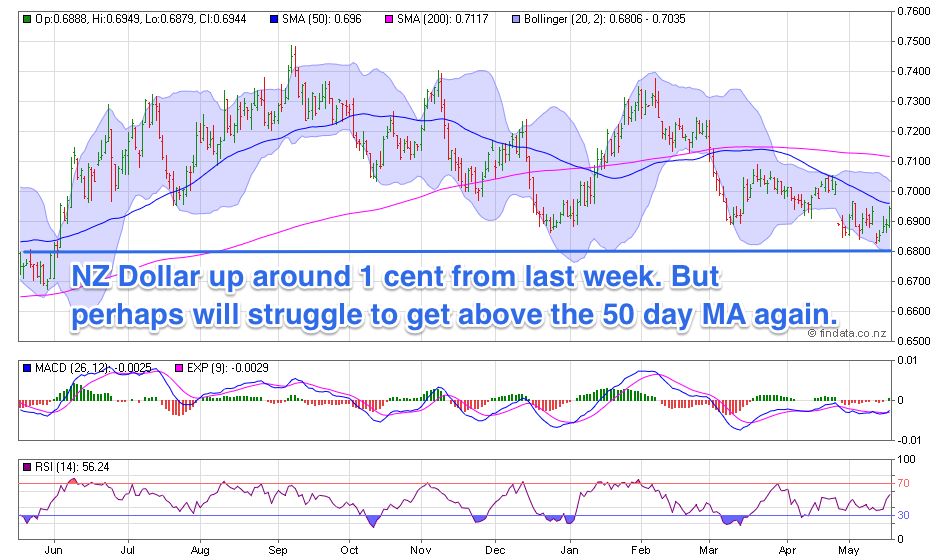 Checkout our feature article this week. You’ll get: 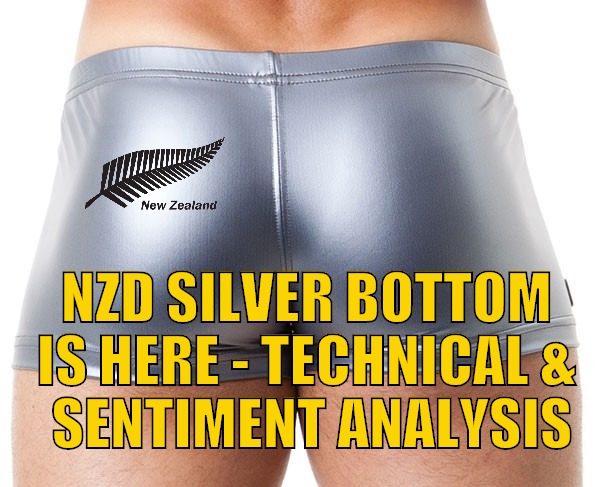 Do you know what we missed last week?
The celebration of the day we pay are no longer “working” for the government.
That is what is known as Tax Freedom Day. It fell six days later than it did last year, according to the number crunchers at Staples Rodway.

“The total amount Kiwis paid in taxes has increased by 9.5 per cent year-on-year, more than double the increase of last year, alongside a 5.1 per cent increase in nominal GDP,” said Staples Rodway’s Mike Rudd.

So after falling it appears to be extending out again in recent years.
How do we compare to other places in the OECD?
In Australia Tax Freedom Day fell on 13 May. Last year, it was 9 May.
Like Australia here in New Zealand the recent trend has been for Tax Freedom Day to occur later and later in the year. In other words, every year you are paying more and more taxes to the government.
But it’s actually worse in many other countries. For example in the UK, Tax Freedom Day is on 3 June. While in France, it arrives on 29 July.
Things are slightly better in the USA where it actually falls a little earlier on 23 April.
So interesting to know how long the average Kiwi has to work for each year before they have finished paying their “fair share”.
What made us choke on our corn flakes this morning though was this comment from the authors of a book just out “Tax and Fairness”. Urrg. Two words that don’t belong together.

“We need to understand taxation as the price we pay for a civilised society. It is not an unjustified impost from a tyrannical government, as libertarians argue; it is the contribution we choose to make through our democratic institutions ensuring that each of us is enabled to flourish, and live a good life,” Russell and Baucher said.

“Proudly paying our taxes is a sign that we believe in our own capacity to create a flourishing society that gives all New Zealanders fair opportunities. We should smile when we pay our taxes.”

Count us as one of those crazy libertarians then please!
Income taxes have only been around for the past 100 or so years and are the least fair form of taxation.
Here’s a question for the authors.
if we get to “choose to make” these “contributions”, why does the IRD have us fined and/or imprisoned if we “choose” not too?
If you smile when you pay your taxes you need your head read. They are anything but fair.
Continues below
—– OFFER FROM OUR SISTER COMPANY: Emergency Food NZ —–

Zimbabwe Contemplates Restoring its Own Currency with Gold Backing

Almost a year ago we published a couple of articles outlining a visit Doug Casey had to Zimbabwe.
(See “Doug Casey’s “Hobby” Could Convert This Country’s Currency to Gold” for details of the surprising visit)
Casey and Nick Giambruno discussed the concept of Zimbabwe having gold as their currency with a number of Zimbabwe government members. Who also surprisingly had a good understanding of Austrian Economics.

“They’ve been interested in using a gold backed currency or a gold standard since the 1990s. But we wanted to make it very clear they should not use a gold standard or anything like that. A gold standard, for those who don’t know, is when a government issues paper money and promises to redeem it for gold.

Well, nobody is going to trust Zimbabwe to keep that promise. So we told them to simply use gold as money.”

Well perhaps some of this discussion actually sunk in. This headline appeared in the Zimbabwean Herald this week: Gold Reserves to Anchor Local Currency

“Government is working on a plan to establish a gold reserve set to anchor the introduction of a local currency when the right time comes for the return to the Zimdollar”.

Since the Zim government is flat broke it may take a while.
They have to mine the gold from government mines first. Who knows whether they’ll be successful at that.
Then there is the fact that they sound like they are going to have a gold backed currency rather than just using gold. Will anyone trust it?
It would be a strange perverse outcome if Zimbabwe was able to introduce a gold backed currency. But as GATA’s Chris Powell said we’ll see what the Bank for International Settlements has to say about that though.
Don’t hold your breathe waiting for anything even remotely like a gold backed currency to come to New Zealand though. Create you own “gold reserves” (and silver reserves) to back/offset any fiat currency you hold in the banks.
Request a quote today by:
— Prepared for Power Cuts? —
[BACK IN STOCK] New & Improved Inflatable Solar Air Lantern