The falling NZ dollar continues to give local gold and silver prices a decent bump higher. As you can see in the table above gold up 2.55% and silver up 2.94% this week care of a 2.55% fall in the NZD/USD exchange rate.

Looking at the NZD gold chart below we can see this has pushed the price up above the steady uptrend it has been in. It did this in January but given how fast it climbed it wasn’t a surprise to see it tumble down just as fast.

By contrast this rise since the start of May has been more measured. So perhaps it will also be a more sustainable rise?

There is certainly no denying that NZD gold is in an uptrend. 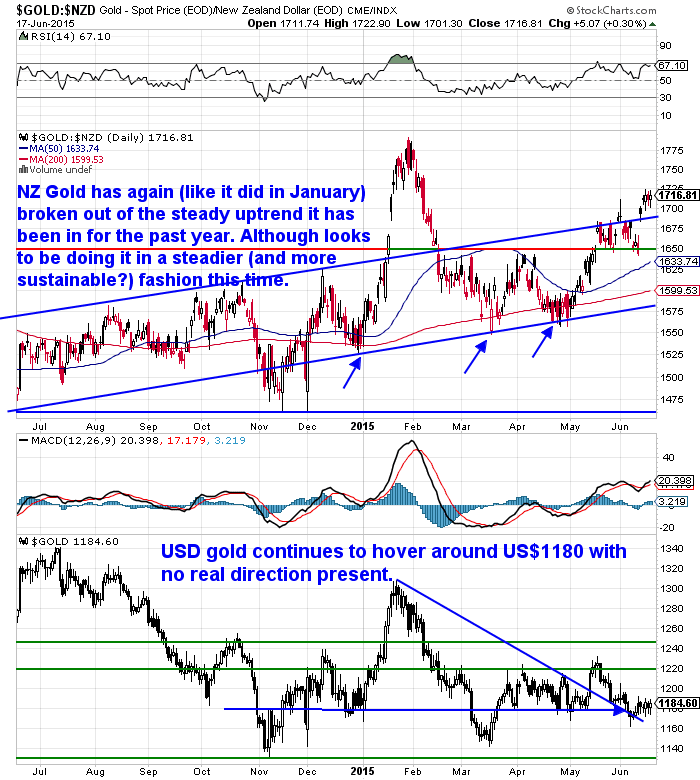 NZD silver also looks to be in a steady uptrend. Perhaps making a higher low just above NZ$22 earlier in June? 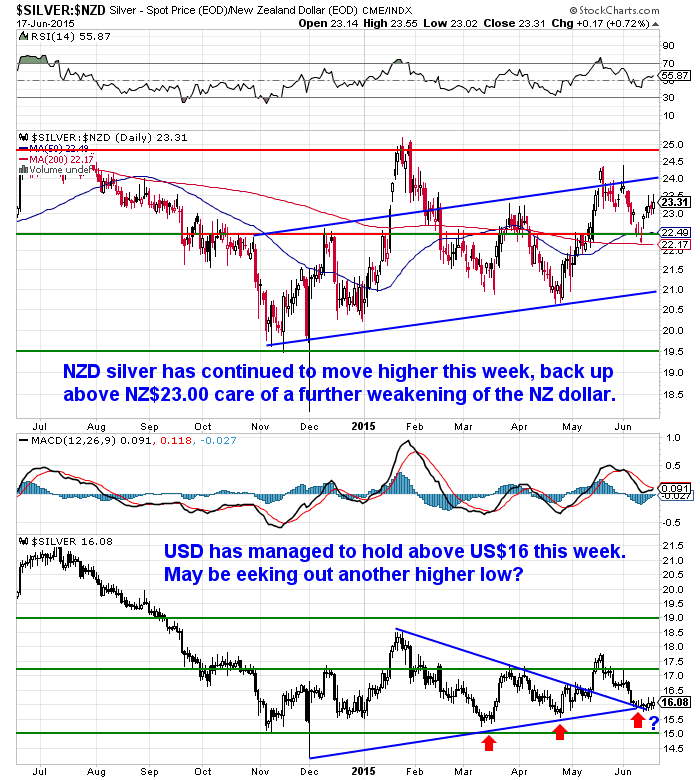 As stated already the New Zealand Dollar remains the key driver of local precious metals prices (you can see in the lower half of each chart that the USD prices have been fairly stagnant in comparison).

The Kiwi dollar was very volatile this morning. It got down briefly below .69 this morning but after the latest US Fed announcement it bounced back up to just under .70.

“Fed officials sharply downgraded their economic forecast for this year. They projected the economy would grow between 1.8% and 2% this year, well below the range of 2.3% to 2.7% in its last forecast in March.

If they’re correct, annual growth would be the worst since 2011 and would be far from the breakout performance some economists had hoped for this year.”
Source.

The Fed wording supposedly means they are slightly less likely to raise rates this year although the survey of the FOMC members shows “15 of the 17 members of the policymaking Federal Open Market Committee still expect to raise the rate this year”.

Our bet is they won’t raise rates this year but just keep the talk up. Given how woeful the Fed predictions of economic performance have been the fact that they have downgraded could well mean it will be even worse!

Plus you also have officials at the IMF and the World Bank saying the Fed should wait until next year at least due to concerns an increase could slow U.S. growth and roil the global economy.

We’d also prefer to take notice of Jeff Gundlach, a.k.a. the “Bond King” rather than Fed members on the direction of interest rates:

“Right now, most folks are expecting the Fed to raise interest rates sometime later this year…

But one of the world’s foremost experts on interest rates thinks this is bogus. In fact, he thinks rates will end the year lower than they are today…

Last year, he correctly predicted that U.S. Treasury yields would fall – when almost everyone else was expecting a rise. As you can see, his opinion on interest rates are worth listening to.

And on Tuesday, Gundlach told his clients that he still believes the U.S. Federal Reserve probably won’t raise interest rates this year. He put odds on a Fed rate increase by the end of the year at less than 50%…

Right now, the consensus is that rates will rise sometime later this year. But when it comes to the financial markets, the consensus is usually wrong.
Meanwhile, the “Bond King,” who has an excellent track record of predicting rates, thinks rates are more likely to fall from here. Investors and traders take note.
Source.

Anyway back to the NZ dollar…

So we guess it means currency traders bought the NZ dollar after the Fed announcement on the expectation that the interest rate differential between it and the USD won’t be growing wider just yet.

However only a short time later the latest New Zealand GDP numbers came out and the Kiwi dollar fell right back to where it was before the Fed announcement.

The GDP numbers weren’t pretty and currency traders took it out on the Kiwi dollar for sure:

The bird has fallen heavily and remans offered without a committed bull in sight as bears challenge the 0.69 handle and totally wiping out upside profits that came on the back of the FOMC’s dovish statement earlier in the US shift. The GDP was the first and last set of data for NZ this week post the RBNZ cutting rates that surprised the markets last week.

The bird has already been as low as 0.6877 on the knee jerk of the FOMC and this could well be an area of interest for the bears on the back of this release. Technically, 0.6800 is on the bears map should the downside be extended further, challenging June 2010 lows of 0.6793.”
Source.

“Westpac Chief Economist Dominick Stephens said the weaker than expected GDP figure “seals the case for a July cut from the RBNZ.”

“The big surprise was business investment expenditure, which was very weak. This is an ill tiding for the state of business confidence and growth going forward,” Stephens said.”
Source.

So lower interest rates ahead for NZ still, as we’ve been saying for a while.

Current Account Deficit up to $8.6b and lower dairy prices yet to hit

This slowdown in growth was also backed up by the NZ current account deficit widening to 3.6% of GDP. That is the largest it has been for a year and a half.

The deficit has ranged between 2 and 4 per cent of GDP over the past five years, well down on the 7 to 8 per cent range prevailing in the three years before that.

“[The] deficit is not large by its own historical standards, but the trajectory is more concerning,” said ANZ economist Philip Borkin.

He expects worsening terms of trade – weaker export prices and a bounce in oil prices – to push the deficit out towards 5 per cent of GDP by the end of this year with the risk of further widening beyond that.

The Reserve Bank, in the forecasts it released last week, has the deficit widening to 6.8 per cent by March next year.
Source.

It’s worth taking a minute to consider what an ongoing current account deficit actually means.

Simply that we have to borrow from offshore to fund our lifestyle.

We were reminded of this by some comments in the Daily Reckoning Australia recently.

You can see in the chart below that it has been this way for years, but has gotten much worse in the past 10 years. (Note: The chart is quarterly so the odd blip in positive territory is cancelled out by the other quarters around it that are negative).

Interestingly this worsening of the deficit coincides with the rise of house prices here in the past decade. This is perhaps not surprising given a current account deficit simply means foreigners must finance our excess consumption.

We’ll hand off to some comments on Australia by Greg Canavan as they could apply to New Zealand just as well here:

“–No one really seems to think it’s [a current account deficit] a big deal right now. And it isn’t…until is it. And it will be at some point. It’s just that no one knows where that point is.

–When a nation runs a current account deficit, by definition it must run a capital account surplus too. This is just another way of saying foreigners finance our excess consumption.

–The thing is, we have no control where the capital goes. So foreign capital coming in and buying up residential property and agricultural land is a direct result of Australia running a current account surplus [GSG note: We think he meant deficit there] and consuming more than it produces.”
Source.

We can talk of various rules and regulations to stop this, but it simply is a requirement of us spending more than we make. Without this offshore funding things here would likely tumble – a lot.

And as Greg says at some point this may matter – a lot. But we just don’t know when.

We noted earlier that we don’t think the Fed will raise interest rates in the US this year.

But there is a decent counter argument to this that we read last week from Ambrose Evans Pritchard in the Telegraph.

We have clearly been in a bond market bubble, one that is unwinding with particular ferocity because new regulations have driven market-makers out of the business and caused liquidity to evaporate.

The Fed is hinting at rates of 1.875% by the end of next year. Markets are betting on 1.25%, brazenly defying the rate-setters. The IMF warned in April that this mispricing is dangerous, fearing a cascade of disruptive adjustments once the Fed actually pulls the trigger, because nobody knows what will happen when the spigot of cheap dollar liquidity is actually turned off.

As Stephen King from HSBC wrote in a poignant report – “The World Economy’s Titanic Problem”- we have used up almost all our fiscal and monetary ammunition, and may face the next global economic downturn with no lifeboats whenever it comes.

The US may be strong enough to withstand the rigors of monetary tightening; others will not. The risk is that rising borrowing costs in the US will set off a worldwide margin call on dollar debtors that short-circuits the fragile global recovery and ultimately ricochets back to the US. In the end it could tip us all back into deflation.

Bond ructions are an early warning that it will not be easy to wean the world off six years of zero rates across the G10, and off dollar largesse on a scale never seen before. Central banks have no safe margin for error.
Source. 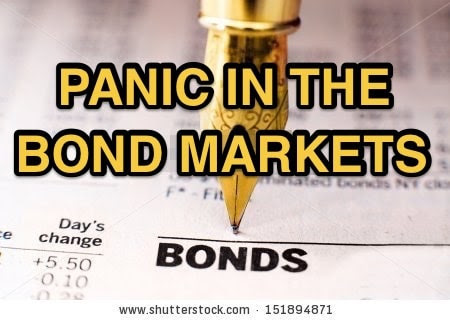 This article ties in nicely with one from Darryl Schoon that we just posted on the website last night. He outlines how the recent rises in government bond interest rates are sending us some loud warnings about how this might be the end of an era.

He also explains why he disagrees that a big central bank instigated monetary reset and new global currency is coming, but rather a different kind of reset…

PANIC IN THE BOND MARKETS – The Bankers’ Last Arena Also if you like a bit of history you should check out the other article and accompanying video showing some historical comparisons in the valuation of silver.

Interesting Historical Comparisons in the Valuation of Silver

As we sign off the NZ Dollar has continued to fall and we’ve just had to update our prices in this email.

So it appears that it is still the NZ Dollars turn to take a dive in the ongoing currency skirmishes.

If you want some protection from this without having to buy the US dollar then gold or silver might be just the ticket. Unlike a currency trade there is no counterparty risk involved in holding physical gold or silver.