The U.S. stock market index, the Dow Jones Industrial Average, recently got over 20,000 for the first time ever. However when measured in other ways the index is still a long way from it’s peak. But one thing that is definitely at a peak is US Government debt. Read on to see what the year 2020 may have in store for the US as a result of this debt…

In 1978, ABC News created a new programme in the US, named for the “20/20” measurement of visual acuity. For 38 years, the programme has remained popular through its format of in-depth news stories.

The 20/20 number is itself of significance in the present year’s news events. In January of this year, the Dow closed above 20,000 for the first time in history. New President Donald Trump glowed in the event, which many of his supporters say is due to the expectations of what his presidency will do for business.

If, however, we measure the Dow against the price of gold (the foremost measure of wealth for the last several thousand years) the Dow presently comes in at roughly 18.1 ounces of gold. However, the Dow reached its peak as compared to gold in 1999, at 49 ounces. Since that time, the Dow has fallen more than 62%. 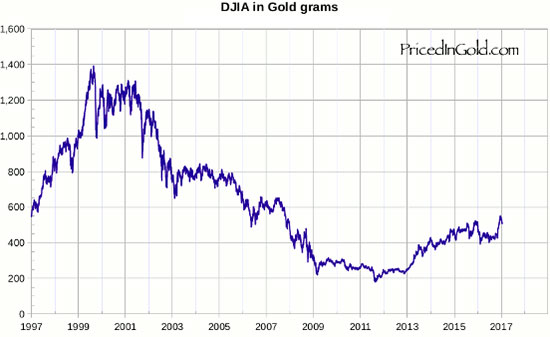 For many of us, the above number of zeroes is difficult to contemplate, yet twenty trillion dollars is the level of debt that the US will reach by June of 2017 at the present rate of increase. (As compared to 1999, this is an increase of over 249%.) The present debt equates to roughly $160,000 per taxpayer. Added to that debt would be credit card, auto, mortgage, and student debt. The question would then arise: “How is it possible that that level of debt can ever be paid?” The answer, of course, is that repayment is utterly impossible. The US taxpayer is presently digging a hole that’s too deep to get out of and his government is doing the same.

And so, regardless of any positive spin that the media might put on the present situation, the 20/20 news is not terribly promising.

Markets periodically form bubbles. The present bubble is one for the record books. Accompanying any bubble is the perception by many that “The sky’s the limit!” Although this invariably proves false, brokers and others who benefit from market transactions are fond of saying, “We’re nowhere near the top.” The more enthusiasm they can create for greater flurries of buying, the more money they make. Not surprisingly, then, major bull markets typically don’t end with a whimper, but with a major upside spike. We can therefore expect that, at some point, a black swan, armed with a pin, will burst the bubble, and we shall witness a market with its collective jaw once again on the floor, aghast over what had been inevitable.

Historically, national debts have also often formed bubbles. For literally thousands of years, political leaders have seen debt as a temporary solution to their own mismanagement. And if one leader increases debt significantly, his successor can generally be counted on to do the same. What goes up must come down, and when massive debt comes down, it invariably does so with a crash. Today, we’re witnessing the greatest level of debt in history, and the resultant crash can also be expected to be the greatest in history.

In 2007/2008, we entered the Greater Depression, yet the media have done an effective job of convincing the public that it was merely a recession. Their greatest argument in doing so has been to say, “How can we be in a recession if the Dow is going up?” And the public have nodded their approval. In so doing, they’ve justified continued borrowing to themselves and, not surprisingly, governments have done the same.

The crash, when it arrives, will take many people unawares and they will lose much, and possibly all, of their wealth. (The level of personal debt is so great now that most people are already bankrupt; they just don’t realise it yet.)

If our foresight is 20/20, we’ll take a lesson from a very consistent history and admit to ourselves that a collapse is in our future and may even be around the corner.

If this is so, we might consider another “20/20”: the year 2020, which will be the year that the new president will be up for possible re-election. If an economic collapse occurs on his watch, it will matter little how well-intended he might have been, or even how successful some of his plans might have been. Any potential he might have had or accomplishments he might have made will pale with the importance of an economic collapse. If it occurs on his watch, he will be vilified by all but his hard-core supporters.

In such cases, history shows that the next leader that a people choose is always from the opposing philosophy of the one that “caused” the crash. In 2020, Americans can expect to see a major wave of preference for a collectivist leader, a wave that first occurred in 1932 with the election of Franklin Roosevelt, after a similar but lesser crash.

It’s a truism that the severity of a hangover is relative to the amount of alcohol consumed the night before. In the present case, the high has been the most extreme in history. The hangover can therefore be expected to be the most prolonged in history.

Following the crash of 1929, the hangover did not truly end until 1946. A seventeen-year advancement of collectivism would therefore be likely to be the minimum that can be expected for the US. By that time, conditions can be expected to be truly Orwellian.

However, this does not mean that all in the US are doomed. It only means that they would be wise to consider what their choices are. They may choose to get out of the market, or even to get out of the US and head for a country that is not in such great danger of economic collapse. It’s a big world and the choices are many.

Editor’s Note: Unfortunately most people have no idea what really happens when an economy collapses, let alone how to prepare…

The coming crisis is going to be much worse, much longer, and very different than what we’ve seen in the past.

Doug Casey’s urgent new broadcast is live… and I guarantee, even Doug’s longtime readers have never seen anything like this before. It reveals why a financial shock far greater than 2008 could strike America during Trump’s first 100 days in office. And how it could either wipe out a big part of your savings… or be the fortune-building opportunity of a lifetime. This special presentation won’t be online for long.

The article 20/20 was originally published at caseyresearch.com.