Note: Locally refined 10oz bars are $273.40 each – pick up
(and they are only cast versus these minted bars) 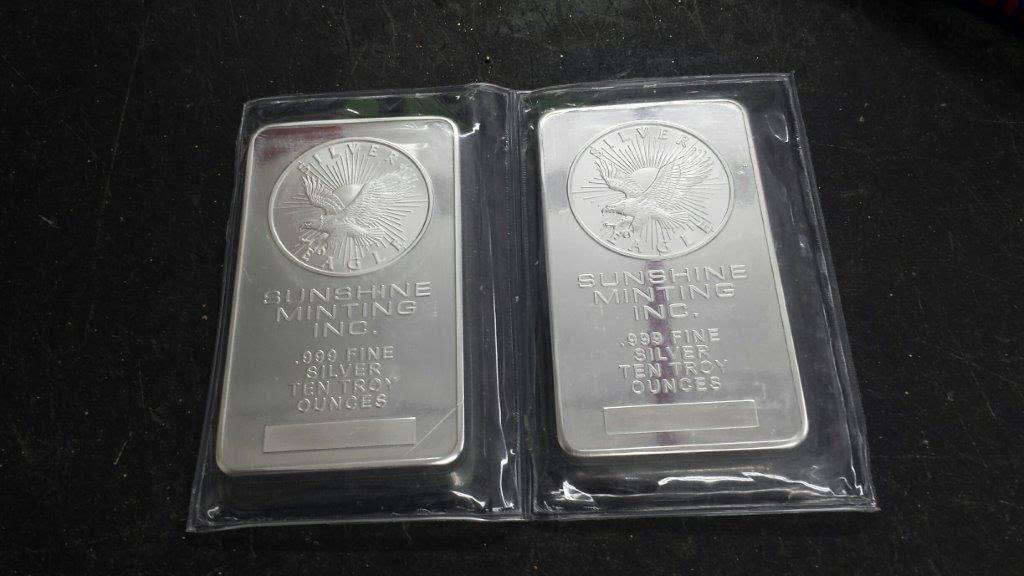 Gold Down – But Silver Up – Just

Gold in NZ Dollars is down yet again this week. It’s been a pretty relentless fall all this month.
The local gold price touched $1700 briefly earlier this week during what has been call a “fat finger flash crash”.
Supposedly some junior trader got confused between ounces and futures contracts or someone made a typo and sold $2 Billion worth of gold at 4am. Hmmm. Seems suspicious to us.
This tripped stop losses galore and gold plummeted before bouncing back to close only $10 lower than where it started. The story went that the whole sale was bought back in the minutes that followed. But as already stated not before many other stop losses were tripped and traders sold
More on that shortly with an interesting angle on why it may signal the bottom for silver.
Since then the US gold price has headed higher. The NZ Dollar gold price is still higher than the low during the flash crash. But the Kiwi dollar has strengthened even further today so NZ gold is struggling to make much headway. 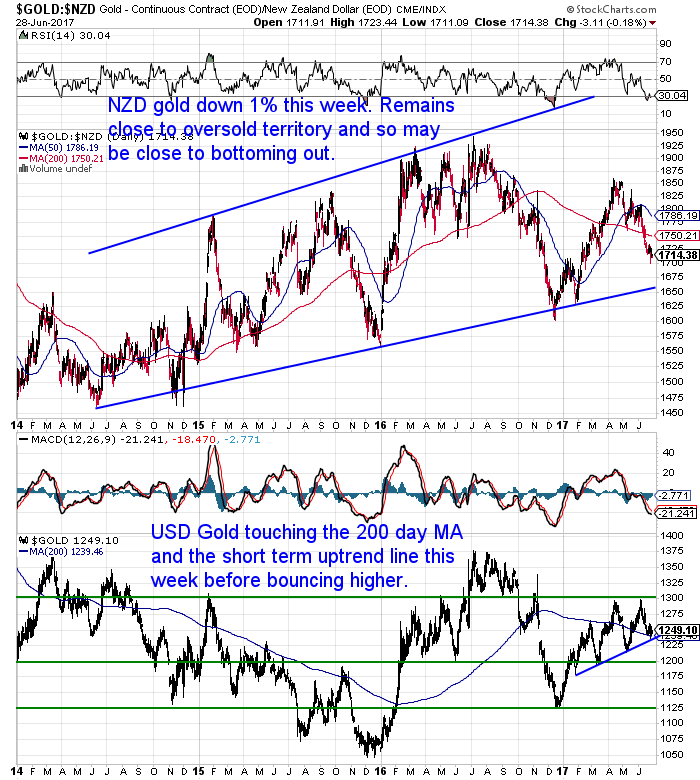 NZD silver has bounced back more strongly than gold after the flash crash. Today it is back above the $23 level for the first time in almost of weeks. Even up slightly on a week ago.
The RSI indicator is just edging up out of oversold territory. Now we’ll see if it can rally convincingly from here. 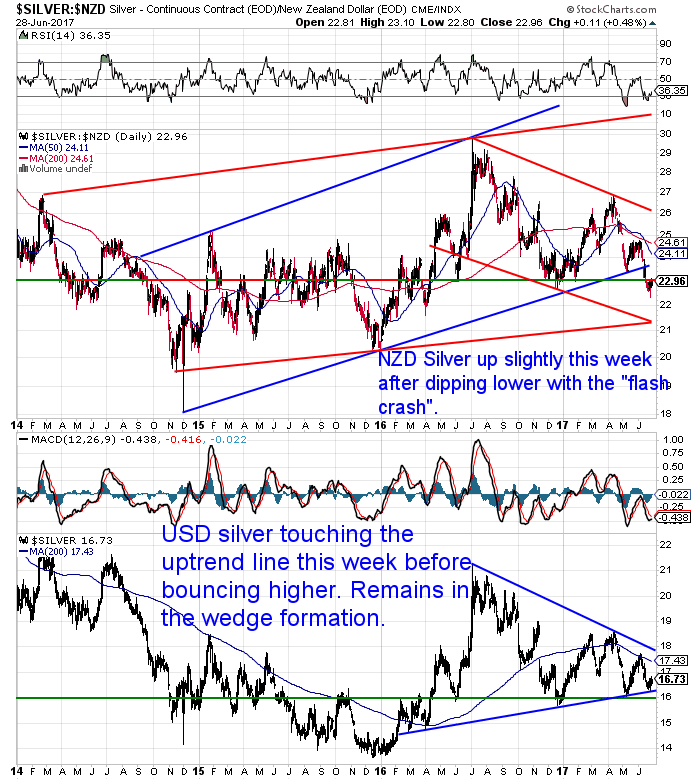 As alluded to already, the Kiwi Dollar has headed even higher this week. Although the MACD indicator does look to be turning down, so this current rise might not have much left in it. (Although we have been saying that for a a week or more already!) 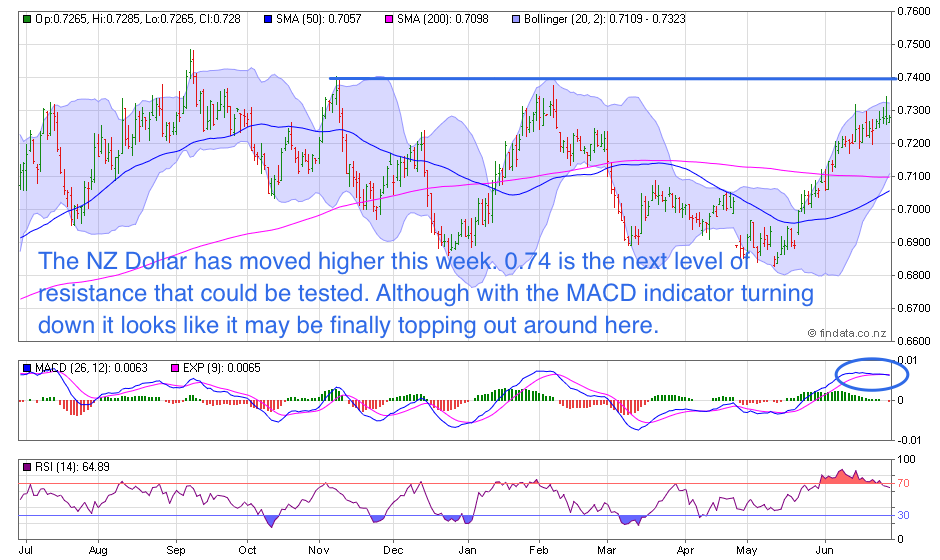 (Looking to buy currently? Sign up here for our daily price alert to stay up to date on the day to day movements in both metals and get the best entry point.)

Bix Weir had some interesting thoughts on why the “flash crash” in silver might signal a bottom.
Of course Bix doesn’t doubt the cause of the flash crash. It’s nothing to do with fat finger typos or dense junior traders. But straight out manipulation.
But he reckons this plunge is a sign they are ready to take the price higher. This was an orchestrated move to flush traders out before the next run higher.
You can hear what else he has to say here.

How Does Gold Compare to Shares For the Past 100 Years?

Last week we asked for ideas on what to write about. Thanks to those who took the time to respond with ideas.
One question we got this week was a request to look at gold versus shares rather than just against fiat currency.
So that’s what we did in this week’s feature article. You’ll discover:

How Does Gold Compare to Shares For the Past 100 Years? 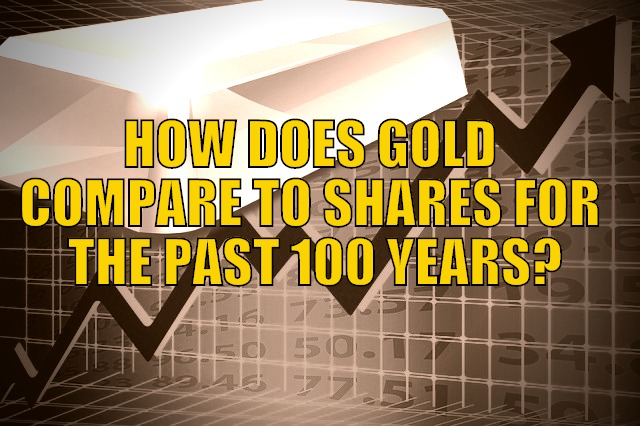 Dissent within the Fed?

This morning Jim Rickards explained why he believes the US Central Bank is likely to pause its interest rate increases in September. Last week there were some key words from insiders that led him to believe this.

What happened was that the opposition to more tightening broke out in open revolt.

Charles Evans of the Chicago Fed and other prominent commentators like Larry Summers said that a rate hike in September would be a huge mistake. (There’s a Fed meeting in late July, but no one expects a rate hike then.)

These voices were added to earlier opposition from Fed Gov. Lael Brainard, who gave a speech on May 30 saying she was a yes vote for the recent June rate hike but is a likely no vote in September.

Why the opposition to tightening all of a sudden, and what does this have to do with gold?

Again, the reason for the opposition is that disinflation, one of our model pause factors, has returned with a vengeance. Both actual inflation and inflationary expectations are plunging. The global economy is slowing perceptibly.

The disinflation is coming from the prior Fed rate hikes going back to last December. One more rate hike this September would be suicidal for economic growth. We’re likely headed to a recession by late summer anyway. The Fed is poised to make things worse. That’s why they’ll eventually change course and not raise rates in September.

Once that message gets out, gold prices will soar.

Forward guidance about no rate hikes is a form of ease, which will weaken the dollar and send commodity prices and the dollar price of gold much higher.

Gold has been performing well against the head winds of higher rates. Once the head winds turn to tail winds, gold will be like a thoroughbred in the paddock when the bell sounds and the paddock gate springs open. “They’re off!!”

I expect gold to win the race against all other forms of money.”

Despite falling since April gold has actually done pretty well so far this year. But sentiment towards gold doesn’t reflect this at all.
Conversely silver (particularly in NZ Dollars) has struggled in 2017. It shot up initially but has given up all those gains and a bit more.
However this happening mid year is not a major surprise. Below Jeff Clark has crunched the numbers on silver’s performance and this shows that historically silver dips the most in June.

I calculated the average gain and loss of silver for every day of the year since 1975 and put it in a chart. Here’s what it shows.

“The official beginning of summer occurs in mid to late June every year (this year it was June 21), and you can see that is when silver historically has its biggest dip of the year. There are always exceptions, but 41 years of data says we shouldn’t be surprised to see silver sell off this month.
What this means is that other than January, the best time of the year to buy silver is in June.
In other words, now. Yes, today. As in, log on now or pick up phone and buy some silver.
If you don’t, history says you will likely pay a higher price later.
Of course, any correction is a buying opportunity if you don’t have enough bullion to offset an economic or monetary crisis. In that type of environment—and one we think is inevitable—physical gold and silver are one of the few assets that will prevail.

So only a couple of days left to buy in June!
On top of this it’s worth again looking at this chart of Fed rate hikes and the US gold price.

Does it appear that gold may once again be bottoming out soon after a US central Bank interest rate rise?
So if both of these historical occurrences play out again, this will make now a great time to buy either metal. On top of this the NZ Dollar looks quite “toppy” so if this turns down soon, that will also gives local gold and silver prices a boost. 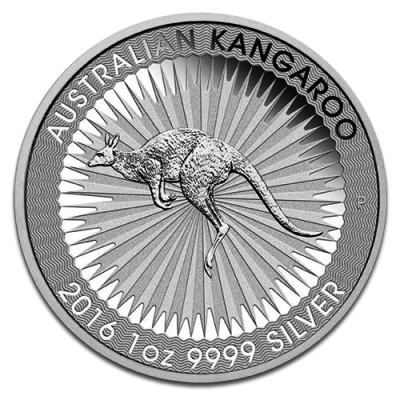