Home / Weekly Newsletters / Advice from the Prime Minister on Gold

Gold priced in New Zealand dollars continues to consolidate just below the $1900 level. Still not far from the March highs. The weakening Kiwi dollar this week has helped to hold it up in the face of lower offshore prices. 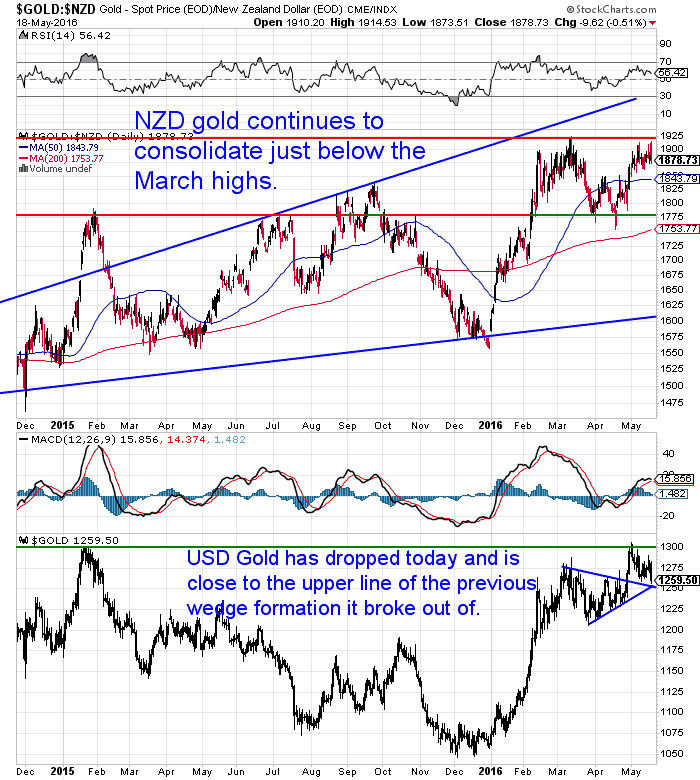 Silver too continues to just meander sideways. The $25 level is thus far proving to be solid support. This consolidation has been going on for about a month now and has served to get the oversold RSI indicator back down close to the neutral level of 50 (see blue circle in the chart). 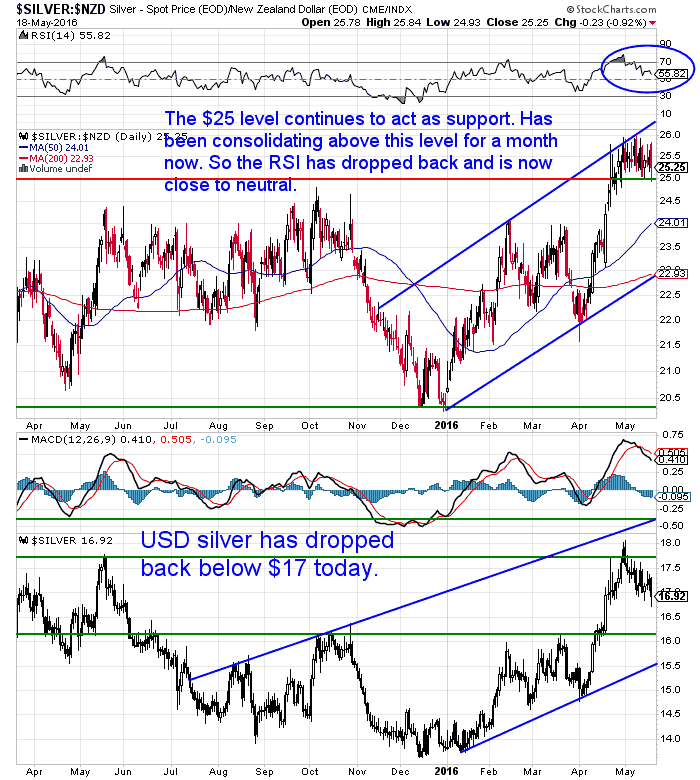 As noted the Kiwi Dollar has dropped lower this week and remains below the 50 day moving average.

However a couple of technical indicators point to the likelihood of it bouncing from here. It is sitting close to the bottom of the Bollinger bands and the RSI is also touching on oversold around 30.

So we might need to see offshore gold and silver prices move up in the next few days in order for local precious metals prices not to fall. 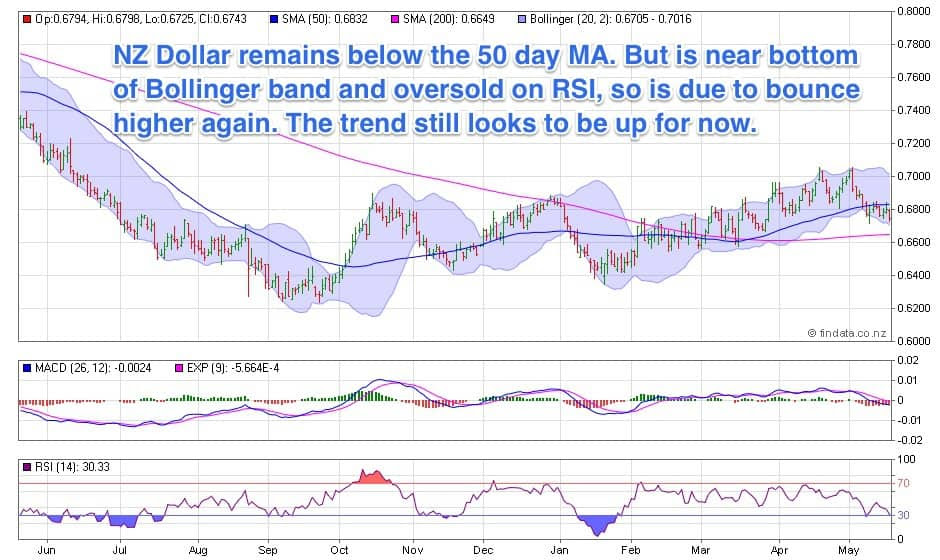 Last week we noted a number of wealthy hedge fund managers had been talking up gold.

(Note: One of those mentioned, Stanley Druckenmiller, has released the full presentation he made which has been posted here on Zerohedge.)

Firstly the family office fund of the ever unpopular George Soros announced he’d sold more than a third of his stocks and bought options betting on a fall in US stocks in the March quarter. Meanwhile he bought a 1.7% stake in gold miner Barrick Gold, and bought options on a gold ETF, to pay out on higher prices.

Interestingly Druckenmiller is Soros’ former chief strategist. So perhaps no surprise they are of similar thinking?

But it’s not just hedge fund managers that are getting more publicly positive on the thesis for holding gold. We’re also seeing some discussion with establishment economists. 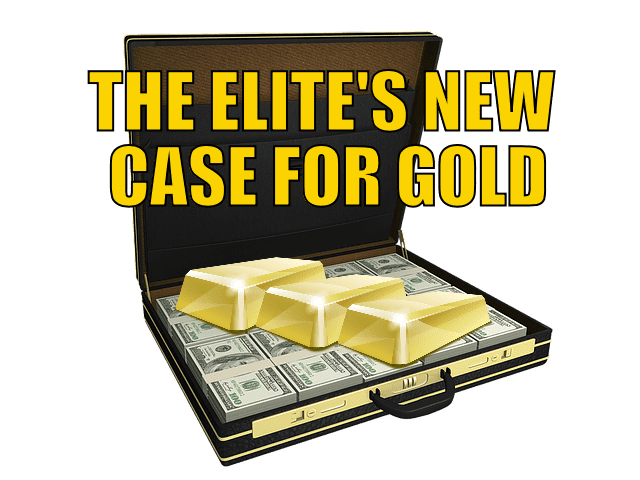 We’ve posted an article on the site this week from Jim Rickards which discusses the positive gold views aired by these definite establishment economists. One of whom is rumoured to be on the short list to fill one of the vacancies on the Federal Reserve’s Board of Governors.

Rickards then theorises as to why these gold positive views are being made now.

The Elite’s New Case for Gold

These pro gold public utterances at first glance would seem surprising. But perhaps it indicates that the leash has been, if not released, at least loosened on gold (and silver) by the powers that be. The price rises thus far this year would point to this fact. As would the latest numbers from the World Gold Council.

Q1 gold demand was the second strongest quarter on record, up 21% to 1,289.8t
Booming investment demand – particularly for gold-backed ETFs – sparked a strong price rally, which choked jewellery demand.Inflows into ETFs reach near-record 363.7t
ETFs had their second highest quarter of inflows ever as investors across the globe sought security to combat heightened economic and financial uncertainty.

What Will Bring Broad Price Inflation?

Last week we looked at How Much Physical Paper Money is in Circulation in NZ vs Total Bank Deposits?

We had an insightful comment posted in response from Mark:

“Good article. I looked into this data a few months ago myself. As the true definition of inflation is “the increase of the money supply” What I’m wanting to know is where is the inflation hiding and what will it take to bring it out? Cheers”

Firstly we’d say not all this money is in hiding. We’d say the many cities globally with rising house prices, along with global share markets having risen for the past 7 years are a result of this newly created money. The Cantillon effect we described last weekwould show that this new money advantages a select few to begin with. Before more slowly spreading throughout the rest of each nation.

However much of this newly printed money is still sitting as excess reserves with the Central Banks, as the commercial banks haven’t loaned much of it out – maybe because there hasn’t been sufficient demand? 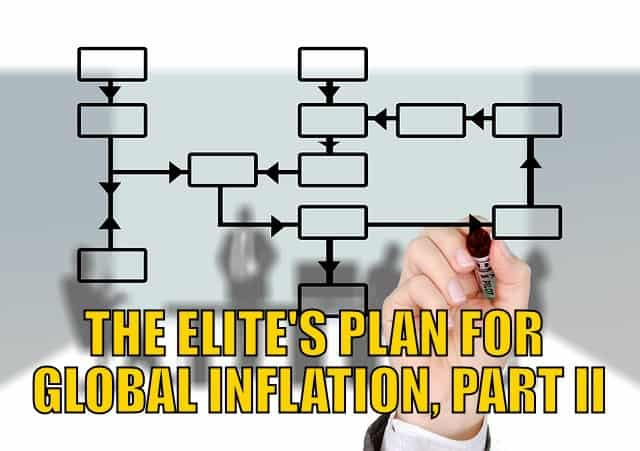 Perhaps it will take actual helicopter money where the governments spend the printed money themselves to really get it sloshing around the global economy?

We have another Jim Rickards article explaining how this may in fact be the elite’s plan:

This helicopter money is what the government and central bank of Zimbabwe used that led to them having to create 100 Trillion Dollar notes, which barely bought a loaf of bread back in 2009.

However it seems these have become somewhat of a collectors item now.

We were interested to read that we actually held what has been the best performing asset of the past 7 years – rising 1500%. In fact for us the returns have been infinite because we were given the 100 Trillion note! It’s not as exciting as it might sound in dollar terms though. The notes are selling for around NZ$50 on ebay. Perhaps we should sell it and buy a couple of ounces of silver instead? 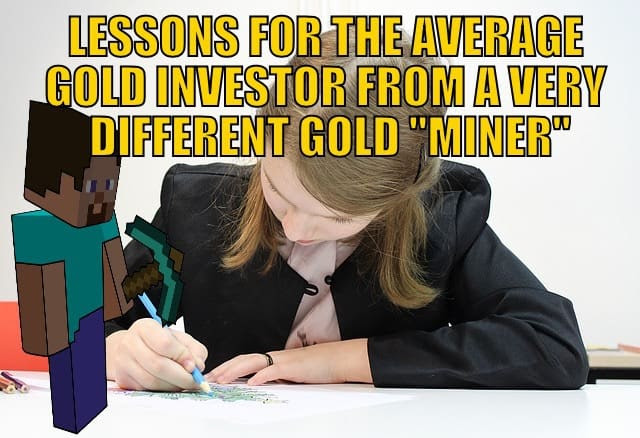 Our feature article this week takes inspiration from a decidedly different gold mining company annual report. It’s an annual report that is worth reading even by those with no intention of ever owning shares in this particular company.

Advice from the Prime Minister on Gold

We happened to hear a radio broadcast this week where the finance reporter was discussing with Paul Henry the price of gold and how much it had risen this year. They noted that back when they were talking about gold a lot, it was just before it started to fall.

That got them wondering if now might not be the time to buy: “We’re talking about it now, so probably means the price will fall”.

Maybe. But perhaps the fact they have noticed the price has risen and now think it will fall is an indication of what the mainstream also thinks?

This fits in well with our theory that there won’t be a significant correction yet.

The Prime Minister was about to be interviewed and he piped up with something along the lines of: “Gold is just for when there is inflation or in times of war”.

So should we follow the PM’s thinking? He is a successful currency trader after all?

Sure it has gone up during inflationary periods like the 1970’s for example. However that was more to do with real interest rates being low or negative during this period. (See this old article for more on that topic:  Gold’s Critical Metric | The One Indicator to Watch)

We recall seeing charts that showed gold rose in the lead up to outbreak of war but then often falls when war actually breaks out. This is a case of “buy the rumour, sell the news”.

A quick net search finds this article to back up our not always reliable memory:

“Does war affect the gold price?

Talk of war and the act of war clearly affects the gold price. The price of the yellow metal obviously continued to climb after each of the three examples we provide. But in truth very little happens when the talk of war turns into action.

This brief look at a small selection of wars suggests that the gold price peaks prior to and at the beginning of military action, before returning to levels seen not long before.”

So our thoughts are don’t take your gold buying advice from news reporters or the Prime Minister.

Of course you shouldn’t take them from us either! Do you own research and make your own decisions. If you decide that now might be a good time to buy then please get in touch. You may just want to have a “demo” quote sent to you to get an idea as to how the process works.

One thought on “Advice from the Prime Minister on Gold”