It has been a somewhat tumultuous start to the year too. New “circuit breakers” put in place by China’s central planners had the opposite effect and actually increased volatility. (Here’s a great explanation of how the “law of unintended consequences” came into play with their move).

[Actually on a side note but speaking of “unintended consequences”, here is a very surprising outcome of negative interest rates in Switzerland:

A Swiss Canton (Region) has told its taxpayers to delay settling their tax bill so that the Canton doesn’t incur costs as a result of negative interest rates charged by Swiss banks! The canton calculates that the move will save SFr2.5m ($2.5m) a year.

Who would have though? A government asking you not to pay your taxes early!

Check out the full article here.]

“Historically the Christmas and New Year Holidays often see gold and silver spike down in price during this low volume time of year.

You can see this clearly in the chart below. Over the past 7 years NZD gold has spiked down at this time of year 6 times. On 4 occasions this was to the low for the year ahead.
It may be worth keeping an eye out for lower prices over the next 2 weeks if you are thinking of buying.”

As you can see in the chart below NZD gold didn’t follow the Split Enz song and history did repeat. With NZD gold dropping sharply in the last few days of the year as we suspected it might, to be at its lowest since point since the start of 2015.

However since the New Year’s day low, precious metals have moved up sharply. This has been magnified here by the NZ dollar also falling. Down close to 4% since before Christmas.

Gold has dropped back from the overbought condition in the past few days and is hanging around the 200 day moving average. But we wouldn’t be surprised to see it drop further down towards the $1630 level still. NZD Silver followed gold lower at the end of the year too. Dipping to its lowest level for the year just below NZ$20.50. It bounced back but not as much as gold did. 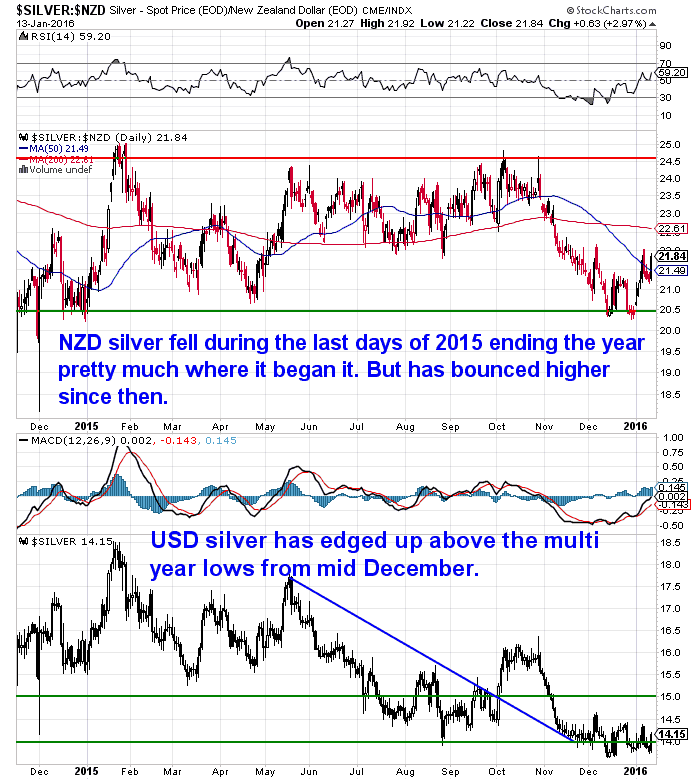 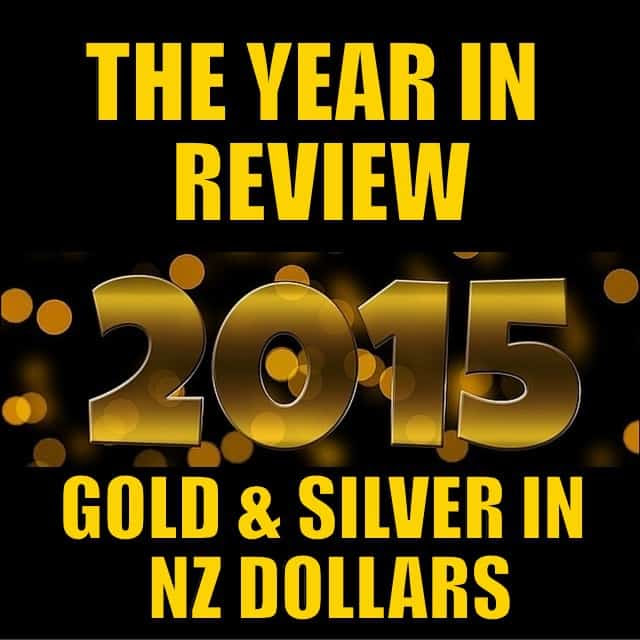 As we do every year at this time, this week we reviewed how NZD gold and silver performed in 2015. Also checking our predictions from last year and making a few more for 2016.
Gold & Silver in NZ Dollars: 2015 in Review & Our Guess For 2016

We’ve also got another couple of recommended posts on the website this week.

The always witty Grant Williams has an excellent presentation from his presentation at the Mines and Money Conference in December available “free to air” which we taken the trouble to summarise.

Williams lays out why he believes the gold price is languishing despite a wealth of what would ordinarily be positive catalysts.

He says that currently, outside those who focus on precious metals, there is an enormous amount of apathy but, he suspects, that apathy will shortly turn to enthusiasm – an enthusiasm which will expose the rift between paper prices set in NY and the structural changes undergone in the physical markets over the last several years.

So this makes it still a very attractive entry price for anyone not yet in possession of any physical gold. 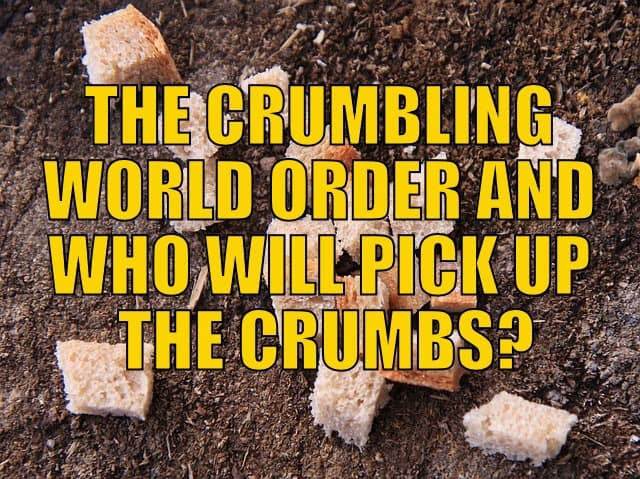 We also have an excellent article from Hugo Salinas Price. He outlines how over the past 15 months international reserves have fallen three quarters of a trillion dollars. Something that has never happened since the creation of the current monetary system in 1944!

See what he thinks this means…

The Crumbling World Order and Who Will Pick Up the Crumbs?

Jim Rickards made a comment this week which ties in nicely to what we said back on December 17 about how: NZ Government $1 Billion Capital Spending is a Sign of Things to Come? Back then we stated:

“Speaking of spending programs. Looks like we are following along with most everyone else as well – with an extra $1 Billion in “capital spending” to “boost” the NZ economy just announced…

…The announcement of the infrastructure spending by the NZ government also contained a statement from Bill English that:

“… the Government had adjusted its targets so as not to strictly target continued surpluses and had loosened its target of reducing net debt to below 20% of GDP by 2020.”
So this spending program here in New Zealand may just be the first phase. Perhaps we will see more spending driven by more borrowing, with wider government deficits and increased government debt? Just as has been happening in most other countries in the west as as Vern thinks is very likely to happen in Australia.”

Rickards believes that inflation is coming. Not from money printing but from massive new government spending programs:

“Inflation is the elites’ preferred solution to non-payable debt. By inflating the value of the dollar, debtors can pay nominal debt at greatly reduced costs in real terms. Inflation steals from savers and investors and gives to debtors (including corporations and governments). Banks and elites don’t suffer because they see it coming and prepare accordingly (often with gold purchases — the current course of China, and Russia). It’s everyday people who suffer from inflation. They are not in on the elite game.

The difficulty of course is that central banks have tried for seven years to create inflation and have failed. This is not due to lack of effort in printing money. It is due to the unwillingness of banks and borrowers to lend and spend. This is a psychological phenomenon, a throwback to the 1930s that is not easily changed.

There is one guaranteed path to inflation, as Keynes correctly described in his seminal works from the late 1920s and 1930s. It goes by various names today including “debt monetization,” “helicopter money,” “people’s QE,” and “fiscal dominance.” It’s all the same. Governments spend the money (no psychological resistance there), finance ministries and treasuries borrow to cover the deficits, and central banks print money to buy the new debt. Easy breezy.

Inflation is coming. Not yet, and not all at once, but it’s coming. It won’t come from “money printing” by central banks. It will come from massive new spending programs. Paul Ryan’s budget-busting spending resolution of December 2015 was a straw in the wind. Debt monetization is the very next thing. Rely upon it.”

Gold is the “Invisible Gorilla” in Global Markets

“Wall Street and Washington want you to focus on the “white shirts” in stocks and bonds.
What do they not want you to see? What is the invisible gorilla in global markets?The answer is gold.The facts on gold are as obvious as the gorilla in the video. World output is about 2,000 tons per year. China, India, Iran and Russia alone have been buying about 3,000 tons per year for the past seven years. The jewelry industry absorbs over 1,000 tons per year. (I consider jewelry to be gold bullion in decorative form, what I call “wearable wealth.”)Additional thousands of tons are being purchased by countries other than the “big four” mentioned above and by savvy individuals in Europe, Asia and Latin America. (U.S. citizens don’t understand gold and are not large buyers.)

This excess of buying over output means existing gold stocks from vaults in London, New York and elsewhere are being depleted at a rapid rate. Actual physical gold shortages and high-profile failures to deliver physical gold by banks and dealers are imminent…

…Our thesis is that physical gold is increasingly scarce despite the “paper gold” manipulations. Confirmatory data (from Russia, China, Iran and India) are piling up in the numerator of the fraction, giving us a Kissinger Cross probability in excess of 60% that our thesis is correct.

What about our timing? Is it too late to invest in gold? That’s where the invisible gorilla comes in.

These canards from Washington and Wall Street are like the scientists telling the experimental subjects “just look at the white shirts and ignore the black ones.” Or, in this case, ignore the gold shirts and miss the golden gorilla.

And no one is paying attention.

Our analytical tool kit (Bayes’ theorem, Kissinger Cross and the invisible gorilla) is telling us that this is a great entry point for gold investors.”

With the NZ Dollar strengthening in the later part of 2015, this has given us another chance to add to our gold and silver stockpiles at cheaper levels too. If you’re looking to buy, keep an eye out over the coming weeks for a bit of a pullback again after the rise since New Year, as that may be a decent entry point.