You can see in the chart below gold in NZ Dollars has dipped down to test the uptrend it has been in for the past year. Now the question is will it bounce higher from here as it did the last 2 times? 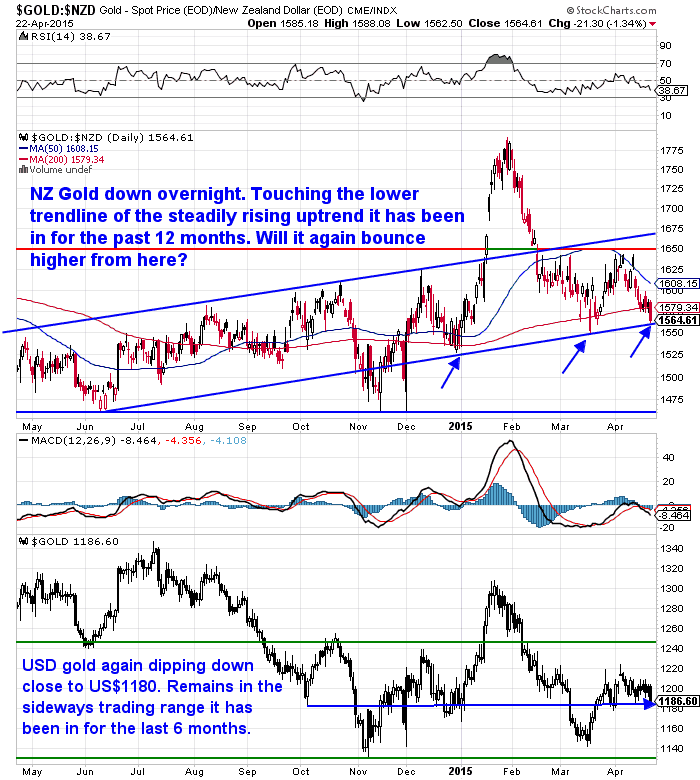 Meanwhile silver has actually dipped down below the recent uptrend line it had held above. It will likely take its lead from gold. If gold dips any further, silver could head down to retest previous lows from last year. 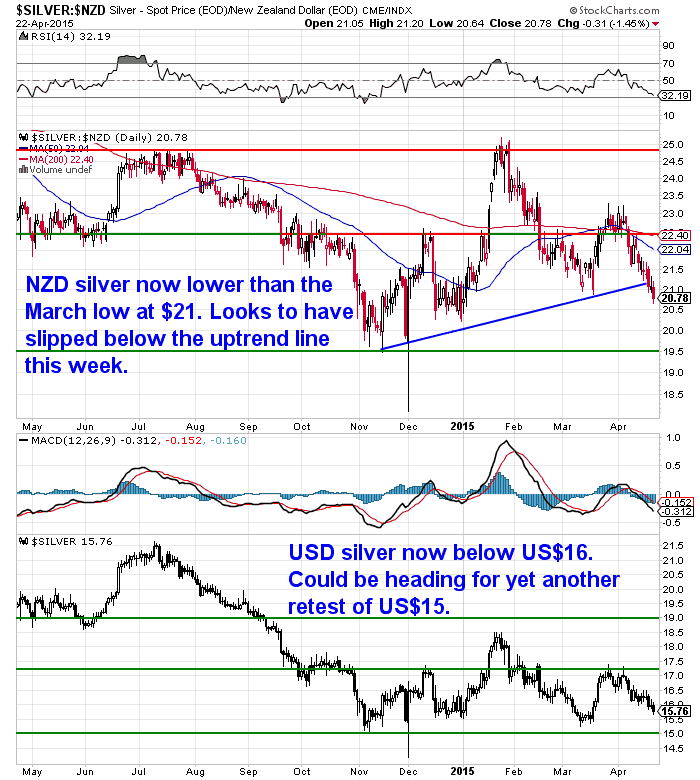 The NZ dollar is also at an interesting junction. It has moved up steadily against the US dollar over the past month or so. But is now getting close to overbought on the RSI indicator (bottom of chart). It’s also close to reaching the 0.78 mark. Between the 0.78 to 0.80 range could prove tough to break above. 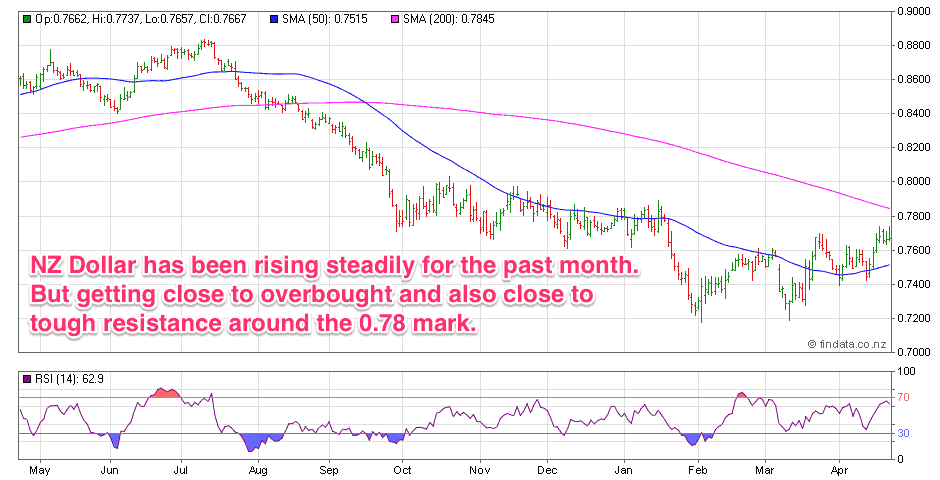 “America’s gold reserve currently backs a record low 7.58% of the US monetary base.”

The gold backing of US currency has reached a record low. Now lower than the early 2000’s when the current gold bull run started.

The lower half of the chart shows what US dollar price level gold would have to reach to achieve 40% and 100% backing of dollar reserves. 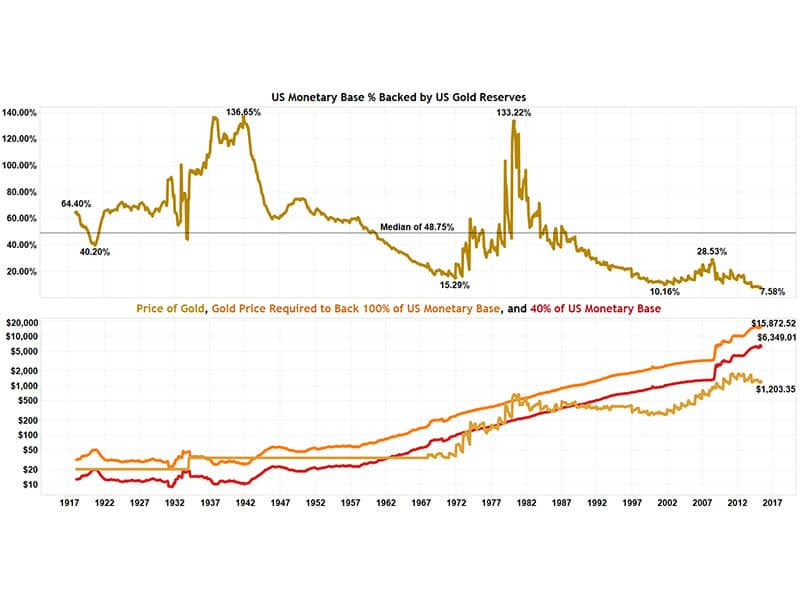 You can check out charts showing the rest of the world here.

Why are the IMF and Jamie Dimon Warning of the Next Crisis?

Last week we made note of a big wig gathering in Washington to discuss Gold, the renminbi, and the multicurrency system.

As it happened our sleuthing wasn’t as groundbreaking as we’d thought, as GATA had already made mention of this a day earlier.

But nevermind, it was still a significant piece of news albeit not reported anywhere in the mainstream press.

It seems to us there have been more and more of these tidbits of information popping up of late discussing changes to the US dollar global reserve currency system.

There were a few more this week too.

First one care of jsmineset.com:

1. Unprecedented development ahead for renminbi

There was perhaps at first glance nothing new in this piece. Some quotes were:

“[Bank of China’s chief economist Cao Yuanzheng] called for reform of the current international monetary and financial order, which dates back to the 1944 Bretton Woods Conference, which divided the world among the lines of developed and developing countries.

“There are major shortcomings, since it was developed when there was a very big gap between developed and developing countries. Now, about 50 percent of the world’s gross domestic product is in the developing world. So it’s clear the system needs some reform. And using the renminbi as an international currency can be part of this necessary reform,” he said.

The “RMB: Going Global” forum was held specifically to promote the use of the renminbi as an international currency, for trade, as a reserve currency, and for cross-border payments.”

Nothing particularly new there but the next quote introduced a timeline:

“Renminbi development may be unprecedented but carefully mapped out nevertheless. In his remarks during the forum, Cao said the process has its roots back in the 1990s, and the veteran economist said he still believed it would take several more years for the level of international convertibility of the currency.

“I now think we can speak in terms of years and not decades,” Cao said. “I cannot predict the time table, but I think we’ll get there before 2020.”

While this is not the head of the Chinese Central bank being quoted it is the head of one of China’s largest commercial Banks. So the fact he is laying out a timeframe for these changes to occur is quite significant we reckon.

Second one was a warning from head of JP Morgan Chase Bank and definite Insider Jamie Dimon:

“There will be another crisis, and its impact will be felt by the financial markets.”

Of course in this letter to shareholders he is arguing for the regulations to again be loosened up for the banks in case of a “liquidity squeeze” in a crisis situation. But it is still significant that he is talking publicly that there will be another crisis.

The third news item was a couple of warnings from the IMF.

Funnily enough the IMF are warning regulators of just such a “liquidity shock” or squeeze as in Dimon’s warning.

IMF tells regulators to brace for global ‘liquidity shock’
“This is becoming hazardous as the US Federal Reserve prepares to raise rates, a move that risks a spike in global borrowing costs and may cause liquidity to dry up almost overnight. “A sudden shift in market views that unwinds compressed premiums and sends yields higher could trigger a market liquidity shock,” said the report.The so-called ‘flash crash’ on US bond markets last October and the collapse of the Swiss currency floor in January showed how quickly liquidity can vanish, acting as “a powerful amplifier of financial stability risks.”
Source.

Ambrose Evans-Pritchard does good job of summarising the many risks pointed out in the report so it’s worth a read in full.

He also covers another IMF warning in a separate article.

“The Fund’s Spring meeting has been dominated by the dangers of a toxic mix of sky-high debt ratios and old-age populations. The message? Something is badly out of kilter in the world”
Source.

Bill Bonner summarised this nicely this morning in discussing the “declining marginal utility of debt”. Basically meaning that as governments across the planet continue to add more and more debt, the effect of this debt declines so growth is actually slowing under the debt weight.

“When there is little debt, you can add cash and credit to a system and get a boost.

The money circulates. The economy revs up. But the more you add, the greater the burden of debt becomes… and the less of a boost you get from it.

Finally, you’ve ballooned the Fed’s balance sheet to $4.5 trillion and you’re getting a measly 1% per capita GDP growth in return.

And then… as in the first quarter of this year… the growth falls to near zero.

It stimulated nothing but more debt – which slows the rate of real growth.”

So How to Prepare?

“The bottom line is that we are starting to see the early phases of a liquidity squeeze.

The flow of credit is going to begin to get tighter, and that means that global economic activity is going to slow down.

This is why it is so important to have an emergency fund.  During this type of crisis, you may have to be the source of your own liquidity.  At a time when it seems like nobody has any cash, those that do have some will be way ahead of the game.”
Source.

Are you prepared for when the shelves are bare? For just $395 you can have a 60 day long life emergency food supply.

What Do We Make Of These News Items?

One argument we’ve heard (and that makes sense to us) is that the IMF by issuing these warnings will be able to say “we told you so” later on when the poop hits the spinny thing.

They’ll also be able to then roll out a “new and improved” global monetary system. One that will “fix” the problems of the old. One perhaps somehow anchored to gold (maybe via the SDR as we’ve seen getting mentioned more and more lately) but still under elitist control. So while their money creating monopoly will be held in check, they’ll still have control.

This is definitely not our preferred option, although may be better than the status quo. As we’ve mentioned more than once in this “great reset” you’ll need to be prepared in advance or face a reduction in your purchasing power in the rebalancing that will occur.

Speaking of preferred options, check out one of this week articles Gold Standard Redux: All That Glitters. It’s a great historical run down on the classical gold standard and its benefits. Plus at the end you can see what our preferred option looks like.

We’ve also got another article with a bit of a history lesson on Why Most of the World’s Banks Are Headed for Collapse.

We received a reader question this week that odds are could be in someone elses head too so thought we’d share it with you:

“Hi There,
I have been following the precious metal updates that i receive as emails and am considering purchasing both gold and silver as investments.
My questions are
1. In the unlikely collapse of a bank who would be able to purchase my precious metals?
2. When gold reaches say $2000 oz who would purchase it?”

Thanks for your email and your good questions.

Perhaps your 2nd one is easiest to answer first.

I imagine you may be worrying that if gold rose a lot (say to $2000 as you say), most would think it was too expensive to buy. However history shows just the opposite. If/when gold reaches significant highs, it’s much more likely that there will be many people looking to buy at these higher levels. Usually that’s when interest is highest, when the price has risen.

And so if there are many people in the public looking to buy, suppliers and refiners will be very keen to buy off anyone willing to sell at these higher levels, as they will have plenty of buyers for it and so will be trying to get as much supply as possible.

We’ve seen gold reach close to US$2000 before and there were plenty of people looking to buy, and we know that refiners/suppliers we use were definitely keen to buy off anyone who was prepared to sell then so they could keep up with those wanting to buy.

Your 2nd question might require a bit more background depending on what you were thinking exactly. We’ll make some assumptions in answering it.

If it was just one bank failure, then there would likely be plenty of suppliers/refiners keen to buy as they always are when people want to sell. This is how they make their money. By buying precious metals back at a bit less than they sell it for – they make money on the “spread” between the 2 prices. One bank failure likely wouldn’t change this. Although it could well force the paper “price” of gold up.

If however you are meaning a complete collapse/failure of the banking system and system wide bank failures, then this would likely make gold even more sought after.

If you are also meaning a complete loss of faith in paper/fiat currency, then precious metals refiners/suppliers may not wish to sell any of their supplies. However they may be prepared to exchange cash for gold/silver still. The question would be whether in this situation, would you want to swap your gold for fiat currency? If faith had been lost in it?

But in this situation history shows you would be able to swap/exchange gold for just about anything you wanted. It would effectively revert to being accepted as money again.

These articles are also somewhat related to your questions and so you may find them of help too:

Hopefully that has answered your questions. Let us know if we’re not quite on the right track or if you have any others. 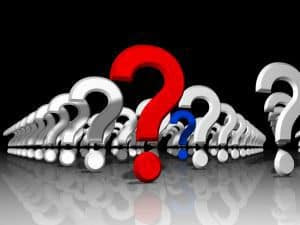 If you’re thinking of making your first gold or silver purchase, but still unsure here are some other common questions we’ve answered for you:

If you’ve still got any other questions then drop us an email or pick up the phone and ask. No such thing as a stupid question in our book.

You can also request a quote, just to see how things work, even if you’re not quite ready to buy yet.