Look Out Below – NZ Dollar Breaks Below Recent Support Levels

Of note this week was the NZ dollar dipping below the 72 cent level. Talk was that this came about on the back of lower forecast payouts to dairy farmers from Fonterra for next year. We’ve also seen a few more headlines with more bank economists (such as HSBC) joining the call that the RBNZ will cut rates this year.

So this expectation seems to be getting built into the NZ currency.

Check out the chart below. With the Kiwi dollar slipping below 72 cents the next levels of support are at around 70, 68 and just above 65 cents.  With the strongest support being just above the 65 cent level.

While the RSI overbought/oversold indicator (very bottom of the chart) is into oversold levels (below 30), you can see in the past the dollar has been much more oversold than this.

So while the odds favour a bounce higher it would not surprise us to see the dollar head lower still yet.

Obviously this will support local NZ gold and silver prices – as the falling NZ Dollar has done this week. 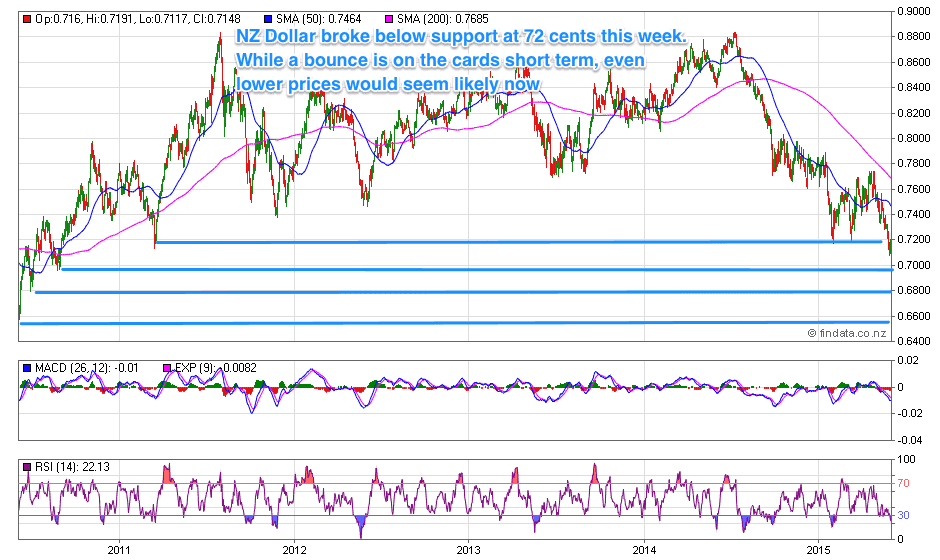 As already noted the falling Kiwi dollar has boosted local precious metals prices this week. While the US dollar prices of both gold and silver have fallen since last week, in NZ dollar terms they were up 1.21% and 0.34% respectively.

NZD gold remains near the top of the rising trend channel it has been in for the past year. But if we see a bounce in the NZ dollar from here, this will likely mean a pull back towards the low $1600’s. 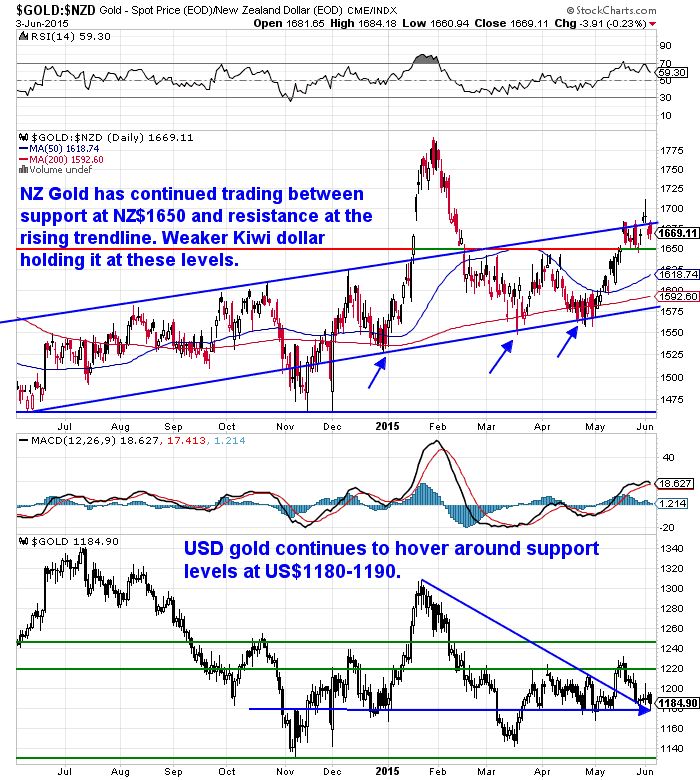 Silver in NZ dollars is much the same. it is consolidating just above the NZ$23 level. Our guess is that the Kiwi dollar may be the main factor determining the direction in the short term from here. 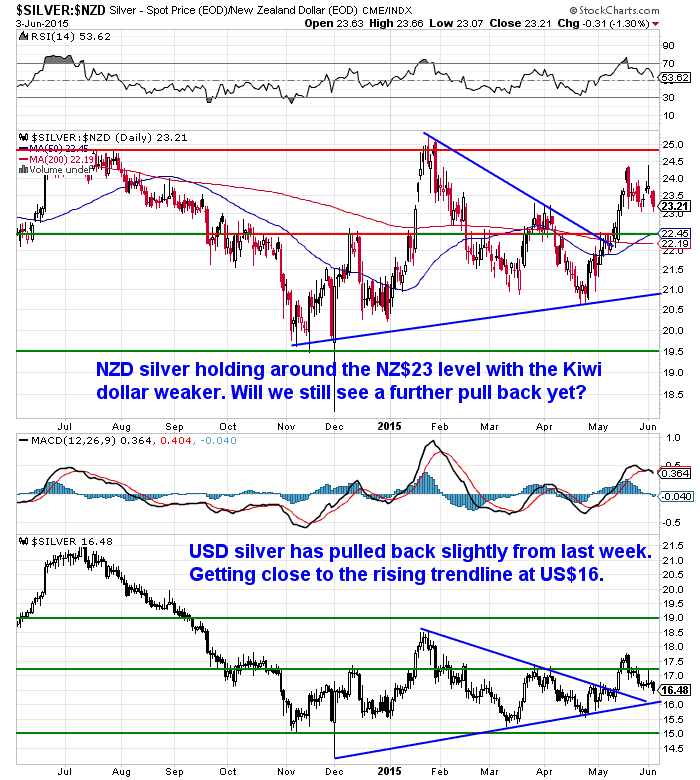 Last week we gave a quick run down of Catherine Austin Fitts excellent recent presentation here in Auckland. We said we’ve give you a full run down but we can offer even better than that now. 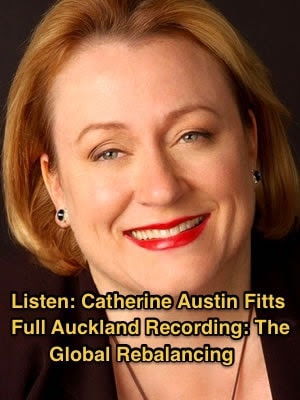 We can share with you the full recording of her Global Rebalancing talk and the excellent Q&A that followed.

We can’t emphasise enough how highly we’d recommend you set aside the time to listen. You can also follow along with the slides she presented as it is in video format. And all for free!

It was heartening to hear the excellent questions being asked by the audience. Nice to know that there are others out there in the local community taking an interest in the direction the world is travelling.

—– OFFER FROM OUR SISTER COMPANY: Emergency Food NZ —– Preparation also means having basic supplies on hand.Are you prepared for when the shelves are bare?

A 3x leveraged Gold ETF is to be shut due to an “inability to attract sufficient investment assets”. Another sign that sentiment in precious metals is pretty close to a low maybe?

Due to the fund’s inability to attract sufficient investment assets, Direxion believes the fund cannot continue to conduct its business and operations in an economically efficient manner. As a result, Direxion concluded that liquidating and closing the fund would be in the best interests of the fund and its shareholders.

Slightly conversely, BullionVault’s new Gold Investor Index indicates that sentiment towards the gold has continued to firm up as the price of gold stabilises.

“SINCE HITTING five-year lows at Christmas, gold investing sentiment amongst Western households has now seen the strongest sustained upturn since summer 2013, writes Adrian Ash at BullionVault.That’s according to our latest Gold Investor Index, which counts buyers against sellers on the world’s No.1 vaulted bullion platform online. It’s further shown on our public Daily Audit of client property by the additional 1 tonne of gold bought by BullionVault users since February. That’s the heaviest addition by weight since the winter of 2012-2013.”Source.

We haven’t seen quite the same level of interest here in NZ. While we’ve seen a couple of sizable purchases the actual number of transactions remains very low this past month or so.

But that might be reflected by the fact that Bullionvault users are predominantly European and US based. And the ECB’s money printing, combined with negative interest rates in a number of European nations has likely nudged many Europeans towards gold in the past few months.

Whereas here in NZ things seem comparatively smooth sailing by comparison. So people assume there’s no need for financial insurance. Of course the time to buy insurance is when it feels like you might not really need it!

Speaking of BullionVault, its head Paul Tustain has gotten into somewhat of an internet stoush with the founders of BitGold over the past week or so.

You can read the full opinion piece here.

Of course Bullionvault is a competitor but he does make some good points in our view. Some of which include:

He also made the point that Goldmoney has taken some big losses over the past few years. Which appears to be as a result of bad hedging decisions.

“What Gresham’s Law says is that it will be a long uphill struggle persuading people both (a) that gold is better than dollars (or bitcoin) for storing the value of your savings and (b) that once you have finally agreed, and bought gold, you should spend it! This is a contradiction. And on top of that it seems there’s an extra 2% fee if you use your BitGold Visa card. Is this really what gold savers want?”

If you’d like to read more opinions on BitGold (including some responses from them) check out these other articles too.

The BitGold founders responded to Tustain, also making some good points and with the thought that “why can’t we all just get along”.

The precious metals market is tiny and much maligned after all. So we really don’t need infighting. Better to let people make up their own mind we reckon.

We haven’t looked really closely into BitGold yet. Time will tell how attractive their business model is to holders of gold.

Our gut feeling is that perhaps it is too early for BitGold yet. While we remain in the era of global fiat money, Gresham’s law would seem to be the major factor to consider to us.

That is, good money drives out bad. So if you buy gold, odds are you won’t want to be selling it or swapping it for cash. Well not until you can spend it on something you’d rather have. Which probably won’t be until its purchasing power has been maximised. Which is some way off yet we reckon.

Primary silver miner First Majestic Silver continues to fight what is a lonely fight. Last year they withheld selling silver inventories on the hope that higher prices would be ahead. http://www.gata.org/node/14576

Now their CEO Keith Neumeyer has penned a letter to the US Futures Trading regulator the CFTC asking them to look into why traders in the categories of speculators as opposed to hedgers would be placing such concentrated short positions when the silver price is so low.

It’s unlikely it will have much impact but still nice to see a mining CEO prepared to poke his neck above the parapet in the “silver price manipulation battle”.

Bill Bonner has a knack for getting major calls right. Even if, as he says himself, he is often “early”.

His “Trade of the Decade” in the 2000’s was to buy gold and sell US stocks, which worked out pretty well. His trade this decade was to buy Japanese stocks, sell Japanese Government Bonds, which so far is doing pretty well too.

So we read with interest his comments in his daily newsletter yesterday on whether we would see an “Ice Age” of low rates and low growth for a long time:

“It seems part of nature’s system that mistakes are punished, errors are corrected, and “bad” things happen from time to time. But like forest fires, they have a useful purpose: They clear away the dead wood and allow future growth.Currently, we are predicting a credit crisis – much worse than the 2008 meltdown.

No one wants it – especially not the deadwood. But we put a high probability factor on this forecast. It is unavoidable… even if we don’t know exactly what form it will take.

And we believe it will be foreshadowed by something even rarer and more unexpected – the disappearance of cash dollars.

Just to be clear, our prediction is that the “Ice Age” of low rates and low growth for a long time – as predicted by many analysts and economists – won’t happen.

Instead, a crisis will cause a crash on Wall Street. The banks will go broke. The credit system will seize up. People will line up at ATMs to get cash and the cash will quickly run out.

This will provoke the authorities to go full central bank retard. They will flood the system with “money” of all sorts.

The ice will melt into a tidal wave of hyperinflation.”

Now Bill does run a financial publishing company, so you could argue that calls like this help sell investment newsletters. However as we noted above he has gotten the big picture calls right over the past 15 or so years.

So he may be early with this call.

But better to be a year early rather than a day late when it comes to financial insurance.

Which is exactly what we see buying gold and silver as. With the handy bonus that buying when the price has been down for years offers a chance for insurance with some upside too.

As we said last week if you have any questions or would like to get together for a quiet chat over a beverage, then by all means drop us an email or give us a call.