Precious metals have continued their run higher from the start of the year. Gold has jumped over 4% from a week ago. It almost reached the high of last September but has pulled back slightly the past 2 days.

Now the question is will it consolidate around these levels or plunge like it did last year at this time?

Odds are we will see a pull back to the 200 day moving average line at least. But we get the impression that the expectation of most is that this is just another bounce in an overall downtrend.

So perhaps this will be when we all get surprised by gold continuing to head higher? 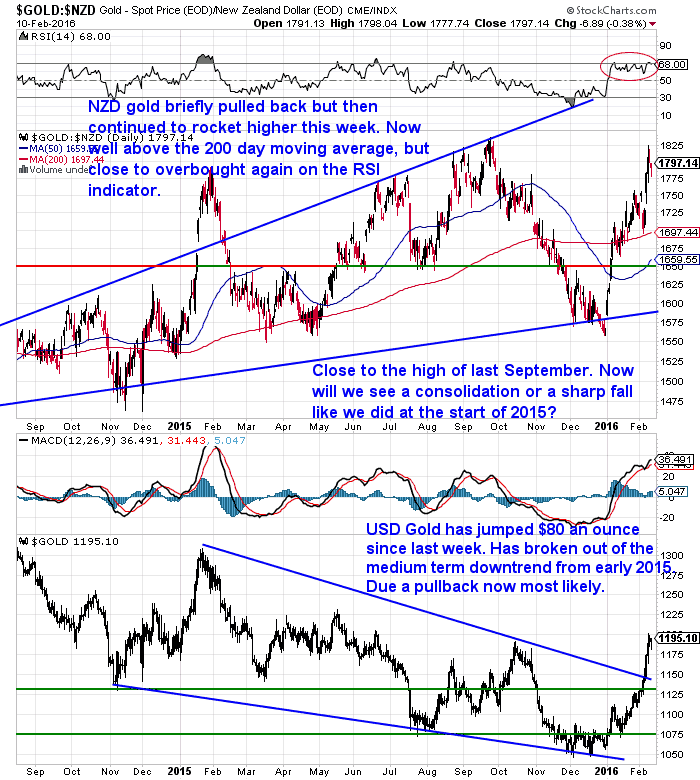 Silver continues to lag gold rising 3.5%. So the gold silver ratio remains pretty high just under 80 (that is it takes 80 ounces of silver to buy an ounce of gold). Silver remains in the sideways trend it has been in over the past year. 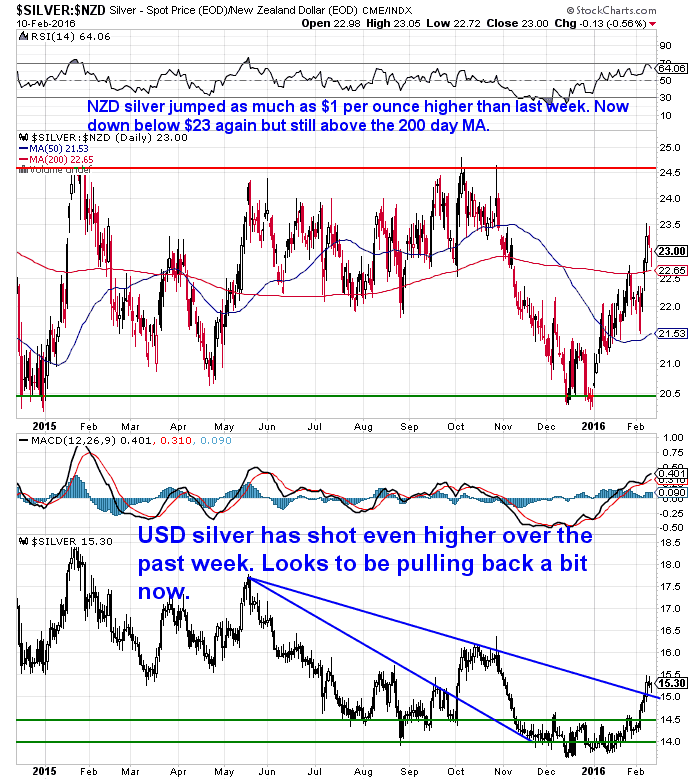 The NZ dollar has remained pretty much unchanged from last week. It is still unable to get above the downtrend line or 200 day moving average, but does look to be building a base around the current levels. 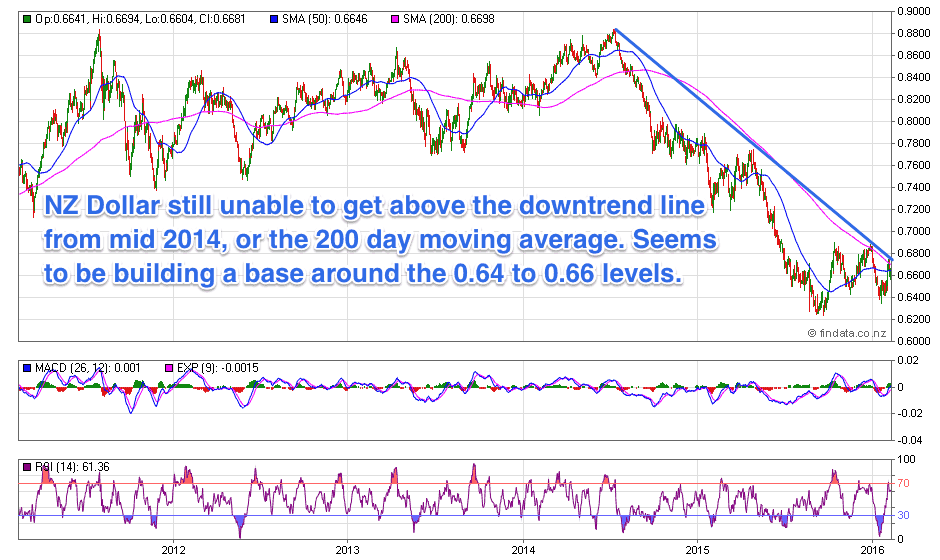 Ronald Stoeferle: 2016 Will Be a Good Year For Gold Investors 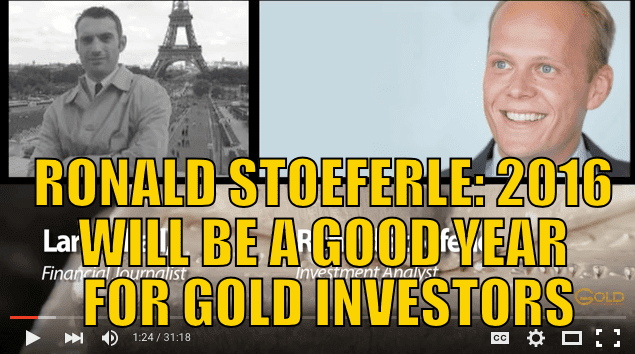 We mentioned the gold silver ratio earlier. We’ve posted a video this week (and written a summary) of an interview with the very insightful Ronni Stoeferle.

He spends a good deal of time explaining the importance, as he sees it, of tracking the gold silver ratio.

He also covered a range of topics including this year’s prospects for gold, silver and mining shares; the still increasing gold demand in China; and a book that Stoeferle co-authored, “Austrian School for Investors – Austrian Investing Between Inflation and Deflation”.

Ronald Stoeferle: 2016 Will Be a Good Year For Gold Investors

NZ Should Become Cashless Too

Bernard Hickey of interest.co.nz is joining the recent chorus we have heard from overseas calling for the removal of cash.

He discusses how the amount of cash in the NZ economy has increased in the past 10 years due to a couple of reasons. Its use in black markets, illegal activities and tax avoidance.

He also noted that:

“Extremely low inflation and not so much faith in banks, particularly in the Northern Hemisphere, has encouraged people to hold their savings in cash because the real value of that cash is not being eroded much.”

He finishes up by saying:

“The holy grail would be a type of bitcoin system that allows people to pay each other without having to use the banking and credit card systems and avoid all the transaction fees and conversion fees that clip the ticket on the (legitimate) economy’s every transaction.

One idea suggested by the Bank of England last year was the creation of a digital currency by the central bank itself. It would use the ‘blockchain’ technology at the centre of the bitcoin system, but that would be reliable and backed by the state. Everyone would have a central bank account and simply transfer money between each other without having to pay fees.

Such a system would allow much cheaper transactions and allow the central bank to impose negative interest rates, once it had also gotten rid of cash. It would be much easier to police crime and reduce the ability to avoid tax.

It all sounds like a radical idea, but it’s one that central banks and policy-makers are considering in other countries as they try to encourage spending, investment and efficiency in a world of deflation, crime and tax avoidance.

New Zealand is some way off the negative interest rates now set by Europe, Sweden, Switzerland and Japan, but it has been a financial policy pioneer in the past and matches Sweden in having a relatively low amount of cash stashed under mattresses.

It may be time to stash the cash back in the central bank and start using our phones to do all our business.”

The key point in this and in those we’ve read from overseas “experts” is the line we highlighted above. While it is positioned as a way to eliminate illegal activity. We believe the more likely real reason is that a cashless society makes it easy for the central planners to implement negative interest rates. Since there is no escape from them if the public can’t “cash out” of the banking system. Thus the idea being it would force people to “spend” and “invest” to avoid having their savings steadily whittled away.

To be frank this is just plain scary! The world we live in now is bad enough, without giving central planners even greater power over our monetary system.

But don’t just take our word for it on the importance of cash. Here’s a brief excerpt from an interview with monetary scientist Professor Antal Fekete on the topic:

Anthony Wile: Do you agree that cash is outdated?

Professor Fekete: Cash will never be outdated because, by definition, cash is just the “most marketable” asset.

We think these discussions of eliminating cash are straws in the wind that we should pay heed to. As stated in the article NZ is a way off the negative interest rates in Europe and now in Japan, however we have been early adopters with the likes of EFTPOS in the past.

Given that we also read this week that “Just under 50 per cent of New Zealanders said they expected not to be using cash in a decade” the public might not make too much fuss and so it might not be difficult to remove cash here either.

Plus with our low population and relatively low levels of cash in circulation compared to other nations who is to say we won’t be a test case for the removal of cash?

Just as we were for the bank depositor “bail” in scheme.

Speaking of bank deposits and bail ins. We noticed this week a little more mainstream discussion of NZ’s lack of bank deposit insurance on the 3 News site. It seems the mainstream is finally catching up with the concept that there is no government guarantee of banks in NZ, which unbeknownst to most has been the case since 2011.

Here’s our first mention of it from back then if you’re unfamiliar with this topic:

Bank Failures: Could they happen in NZ? The Reserve Bank thinks so

—– OFFER FROM OUR SISTER COMPANY: Emergency Food NZ —–
Preparation also means having basic supplies on hand.
Are you prepared for when the shelves are bare?

A big week for financial news in New Zealand this week.

A reader (*Thanks Crissie) kindly forwarded on the following very illuminating article earlier today which we’d missed during the week. It digs into the nature of the NZ government derivative exposures – a very opaque area. 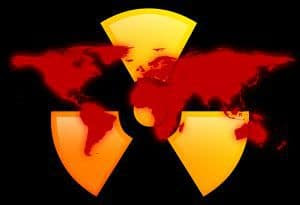 We have previously covered this topic in our article:

Derivatives – a Beginner’s Guide to “Financial Weapons of Mass Destruction”

In this guide we also referenced research by Associate Professor Dr Sue Newberry who is quoted in the recent article.

Back in 2012 when we wrote our Beginner’s Guide to Derivatives, she stated there were $112 Billion in off book derivatives for the NZ government. We compared this to NZ GDP (itself not the greatest of measures but we don’t have much else to use as a benchmark) which was at  $202 Billion in 2012.

This latest article says NZ Govt derivatives now stand at $180 Billion -an increase of 60%  just 4 years later. While Statistics NZ says GDP has increased to $245 Billion. So GDP has gone up less than 25% but derivative values have gone up 60%.

All very opaque of course but more evidence we are following the rest of the world down the rabbit hole of “financialisation”.

It’s quite a lengthy article but we’d recommend you take the time to read it.

And if you’re unfamiliar with derivatives then also check out our previous article referred to above.

In that article we finish up by saying:

“…physical precious metals are “the achilles heel” of financial fraud.  And if all the above isn’t reason enough to remove some paper money from within the manipulated financial system and exchange it for physical gold and silver we don’t know what is!”

With more concern starting to appear about the state of the global financial system, make sure you are armed with “the achilles heel” of financial fraud, before the battle begins.

Check out this cool new survival gadget. It’s easy to use. Just charge it in the sun. Inflate it. And light up a room.