Gold and silver prices have edged back slightly in NZ dollar terms this week. The weakening Kiwi Dollar has kept them from falling too far even as the US dollar prices of both metals have pulled back.

Gold in NZ Dollar terms is sitting just below its 50 day moving average around NZ$1740 and continues to move steadily higher as it has done for the past year. In US Dollars it is looking promising too. 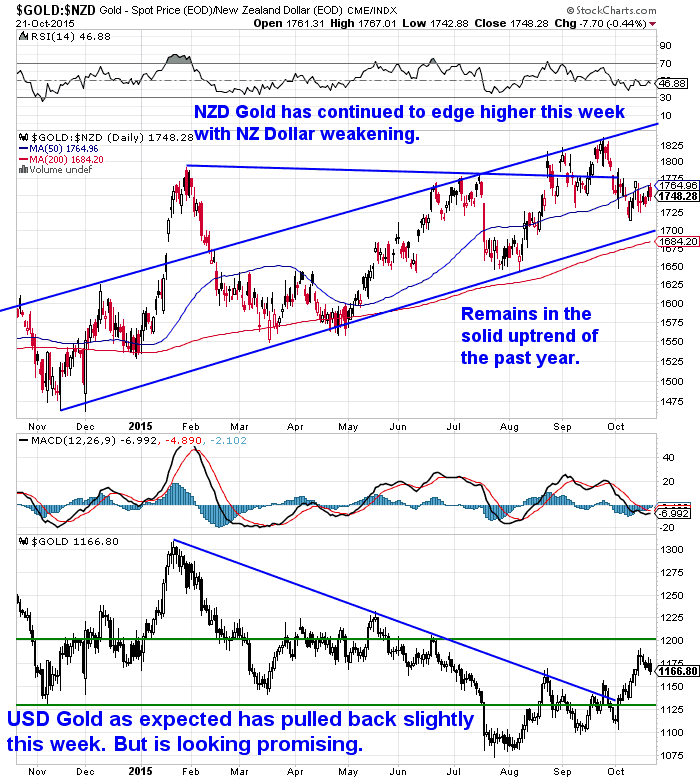 NZD silver is consolidating just above its 50 day moving average and sitting right in the middle of the rising trend lines of the past year. 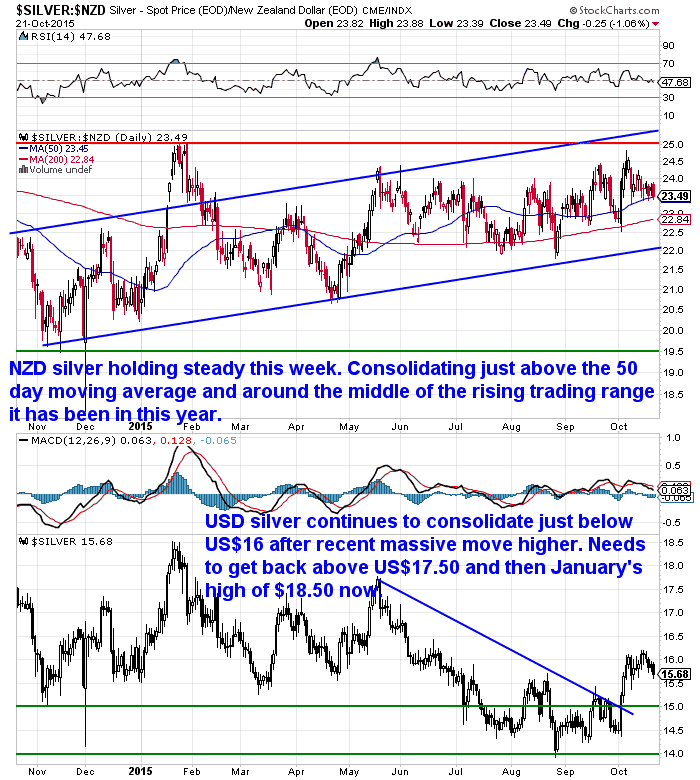 As noted already the Kiwi dollar has dropped this week as we pondered it might last week. The again falling whole milk powder prices earlier this week didn’t help.

The NZ Dollar is still in overbought territory (above 70 on the RSI – circled in blue below). So likely that it could drop further yet, maybe to around 66 cents or to the 50 day moving average at 65 cents? 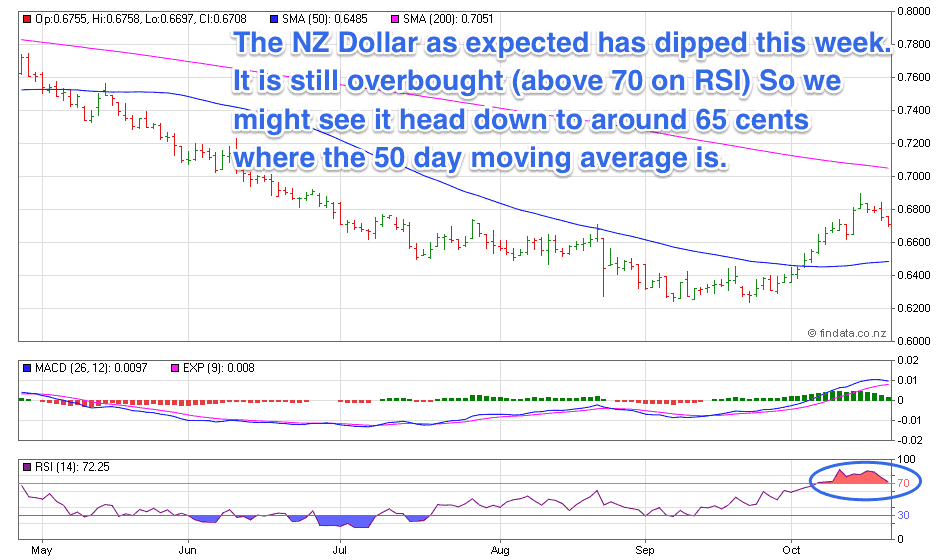 Demand for gold and silver has backed off during October. Not only in New Zealand – where we have seen fewer purchases this month, but our overseas contacts have reported this too.

This in turn looks to have impacted premiums on the likes of Canadian Silver Maples which have eased back over the last week. Meaning the wholesalers have been prepared to sell more of what stock they have been likely holding back at lower prices.

Back in July we commented on rising silver premiums both on overseas minted coins and local NZ refined silver. We expected the premiums to pull back as they have done…

“So it will be interesting to see how long these higher premiums persist. Our guess is Mike Maloney is right that this isn’t the end of the world – yet. This monetary crisis might be drawn out a while longer yet, so odds are premiums will return to normal again. As eventually either demand will fall or the refiners and fabricators will ramp up production to meet the demand.

So the “silver shortage” is probably still more of a fabrication bottleneck, than an actual shortage of silver.”

So that appears to have been the case with premiums falling. However since July the spot price of gold and silver have also risen. So this has probably cancelled out any of the falling premiums above spot since then. 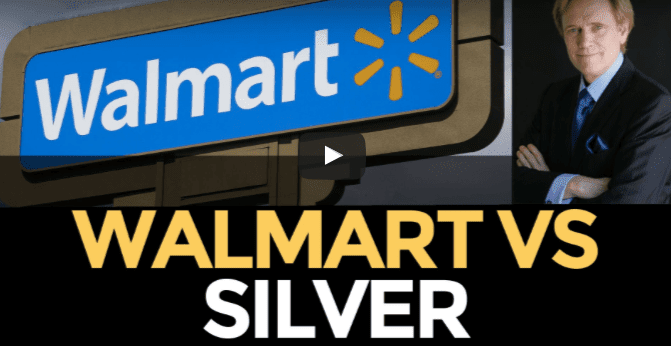 Mike Maloney covers this very topic in a video we posted earlier today.

He also discusses why he thinks there could well be another shortage in US Mint silver eagles in the coming months. Plus how he thinks we will still see more deflation before inflation arrives. It’s not too long and worth a look.

Two Amazing Conferences for the Price of One

Casey Research has put together a package never before seen… an incredible value… and it’s only available for the next 8 days.

When you purchase the audio collection from the just completed 2015 Casey Research Summit, you get free access to Stansberry Research’s October 2015 Conference Series video stream.

Last year we featured an excerpt from the founder of mortgage broker Squirrel Mortgages John Bolton with a very alternative view of the NZ economy. Particularly for someone within the real estate industry.

Over the weekend we read an even more surprising article from him headlined:

Is this the end of fiat money?

He questions whether the current monetary system will survive these days of high debt, weak inflation & low interest rates. Again, it was a very surprising article from someone in the real estate lending industry.

“I have a sneaky suspicion that our current monetary system (and possibly the way governments work) will not survive what’s coming. History shows us that change is inevitable. Is it that time again? Is fiat money coming to an end?”

But the whole article is well worth a read to get some insight from someone heavily involved in the lending industry in NZ. Plus check out some of his previous articles on there too for some non mainstream takes on property in NZ.

For just $265 you can have 1 months long life emergency food supply.

Even the mainstream media is doubting Chinese government statistics now. The UK Independent reports that officially, the Chinese economy grew by 6.9% in the third quarter. But that this is likely a made-up number. China’s GDP figures are political, not factual. The truth about Chinese growth is a lot scarier.

However odds are Western government stats aren’t a whole lot more accurate in many areas either.

Tony Sagami this week noted that:

“…the latest Producer Price Index (PPI) numbers from the Labor Department, …said that prices at the wholesale level actually declined by 0.5% in September. Over the last 12 months through September, the PPI has dropped by 1.1%… that’s the eighth consecutive 12-month decrease in the index.

…While the Labor Department was spitting out its PPI numbers, the Wisconsin Farm Bureau Federation (WFBF) begged to differ.

The Wisconsin Farm Bureau Federation tracks the prices of key agricultural commodities that most American households use every day.

Sure, the price of a gallon of milk may be slightly different in Texas than in Wisconsin… but not by that much, and the price trends are usually very similar.

Well, according to the WFBF, the prices of basic grocery staples are rising.

The WFBF doesn’t have an ax to grind when it comes to inflation. It is simply reporting the prices of a static basket of commonly used food items.

I don’t bring this up to prove how smart my sister is. Heck, any housewife in America could have told you the same thing. Moreover, my sister also complained about big price increases for pharmaceutical drugs, college tuition, and services like dry cleaning and automotive repair.

My points are that (a) you should always look at government-produced numbers with a skeptical eye, and (b) understand that the government, particularly the Federal Reserve, uses these heavily massaged numbers to justify its agenda.

For example, the lower the cost of living, the less the US government has to pay out in cost-of-living adjustments for Social Security and federal pension recipients.

And when it comes to interest rates, the Federal Reserve has proven that it doesn’t want to raise interest rates—and it will happily use the latest PPI numbers to prove its point that inflation isn’t a problem.

Fed officials have said they want to be “reasonably confident” inflation will move toward their 2% target before they raise interest rates. The latest PPI numbers will keep rates at zero for at least the rest of 2015 and well into 2016.

Daniel Tarullo, a member of the Fed’s Board of Governors, said last week that the Federal Reserve should not increase interest rates this year. “Right now my expectation is—given where I think the economy would go—I wouldn’t expect it would be appropriate to raise rates.”

Bottom line: You should absolutely believe the Fed when it says that it will “remain highly accommodative for quite some time.”

Sticking to inflation numbers the latest official stats here in NZ are also very low. Take this headline from earlier in the week:

Annual inflation is meant to only be 0.4%. But for the average person we doubt their yearly cost increases are anything as low as that. We have our doubts that the basket of goods necessarily reflects what the average person buys. Plus with “adjustments” and “substitutions” the number also ends up less than what most people on the street experience.

We’ve noticed more articles appearing in the mainstream pointing to a likely upcoming global recession. Here’s one on Stuff.co.nz originally from the Sydney Morning Herald:

On the edge of another recession?

The global recession that followed the GFC was the most severe in half a century – and the world may be in for another shock, IMF researchers say.

Numbers like these below from Bill Bonner’s Diary certainly seem to back up the assessment:

In September, growth in industrial production slowed to 0.4% compared to the previous year – inching dangerously close to negative territory. 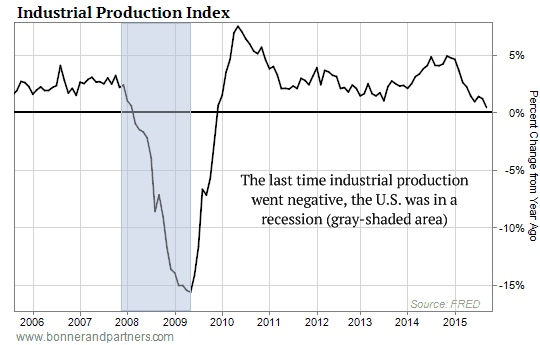 The last time this index turned negative, the U.S. economy was in recession (gray-shaded area on the chart).”

Problems With Helicopter Drop or QE for the People

For the past few weeks we’ve featured a lot of discussion about “QE for the people”. Or helicopter money drops. This is where, unlike previous money printing which just went to the big banks and has had little impact (yet) on inflation, “QE for the people” involves central bank’s printing money and the government spending it directly. Not necessarily mailed out to every citizen, but more likely via infrastructure spending and the like.

Lacy Hunt in his Hoisington Quarterly Review and Outlook looks specifically at the problems with a monetary Helicopter Drop (or QE for the people), for what on the face of it to most will seem like a great idea.

He first discusses just the legal changes that would be needed in the US for such a thing. Next looks at the problems for depository institutions.

But most importantly he then looks at what they could do (or rather couldn’t do) when inflation became a problem.

“Another unknown is how this system would work when inflation became a problem. If this new system were put into place and the drop effectuated, the central bank would not have the tools to contain future inflation. The money created under this proposal would be “wild” in the sense of being held by untold numbers of economic participants. How would they be retrievable by the Fed when its marketable assets do not equal its liabilities? The Fed would have an insufficiency of assets to sell in order to be able to reverse the helicopter drop. At the point that inflation became a problem, the Federal Reserve would have to transfer its debt back to the U.S. Treasury, and possibly even need to reverse complicated law and constitutional changes enacted, to carry out the helicopter drop.

The lessons of history strongly suggest that the helicopter drop will fail in the long run, as do all regimes that try to use inflation to promote real economic growth. Time and again in the countries that have tried such approaches, inflation has ultimately outpaced nominal GDP, resulting in a reversal in any initial gains in real GDP. The standard of living has contracted and, like in previous periods of rampant inflation, households of modest means fell further behind those with higher income.”

We think the writing is slowly appearing on the wall that there are more monetary experiments to come. As Lacy Hunt notes above in the past they’ve never worked out in the long run.

Furthermore as the surprising article from mortgage broker John Bolton notes the odds are that our current monetary system won’t survive what’s coming. So be sure you have some financial insurance in case he is right.