Home / Weekly Newsletters / RBNZ: First they taketh and then they giveth back 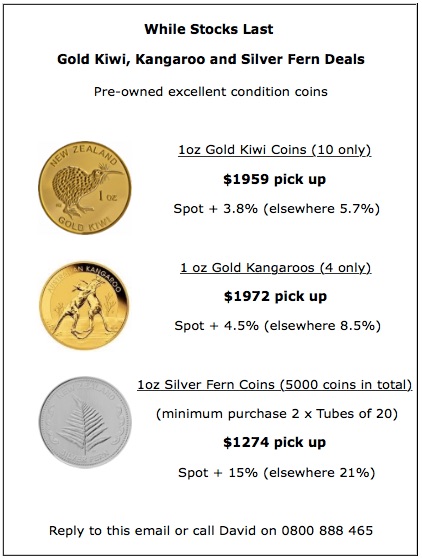 The metals have gone in different directions over the past 7 days.

Gold in NZ Dollars is up from last week while silver is down slightly.

The chart below shows gold rising all week and again getting close to the overhead resistance line at $1925.

Will it get through this time? 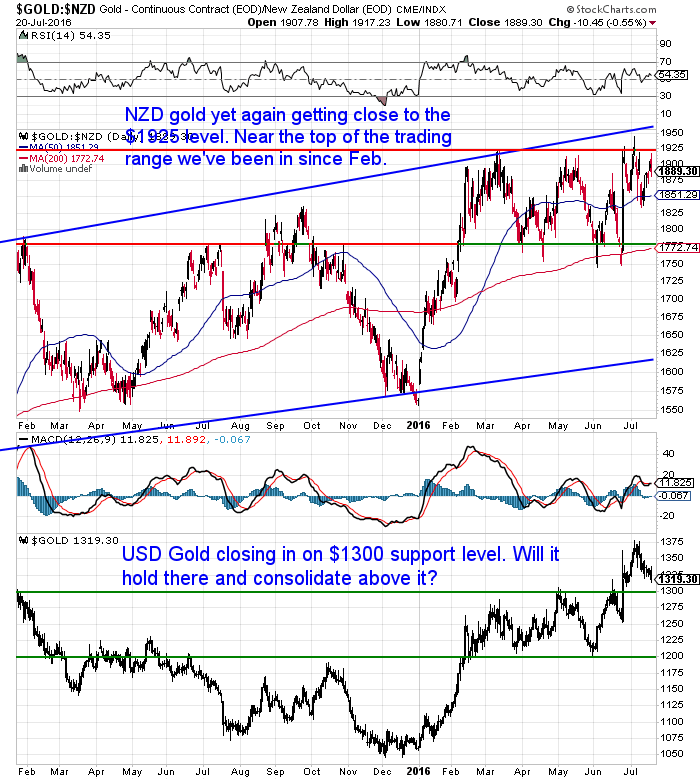 If the RBNZ gets it’s way (that is a weaker kiwi dollar), gold just might.

The NZ Dollar has been falling all week and earlier this morning was sitting on the 50 day moving average and also the bottom of the Bollinger Bands (the blue shaded area).

But then the RBNZ made their previously unscheduled announcement that sent the dollar down well over half a cent. The RBNZ press release heavily hinted at further interest rate cuts. Hence the dollar took a dive. It might well fall towards the 200 day moving average now around 0.68 cents. (We’ll have more comments on the central bank announcement later). 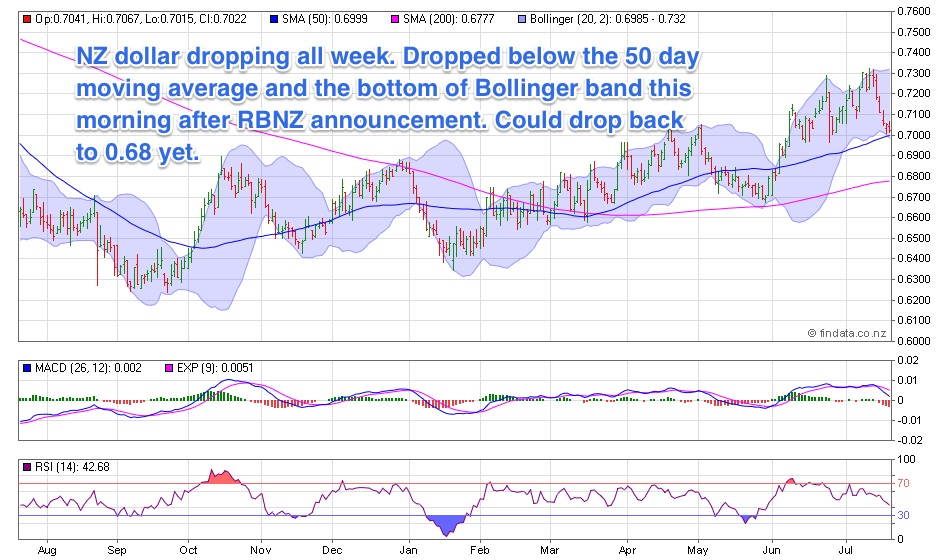 Silver has done just the opposite of gold. Edging lower over the past week.

At the very least we’d expect a further sideways consolidation for silver after such a strong move higher recently. 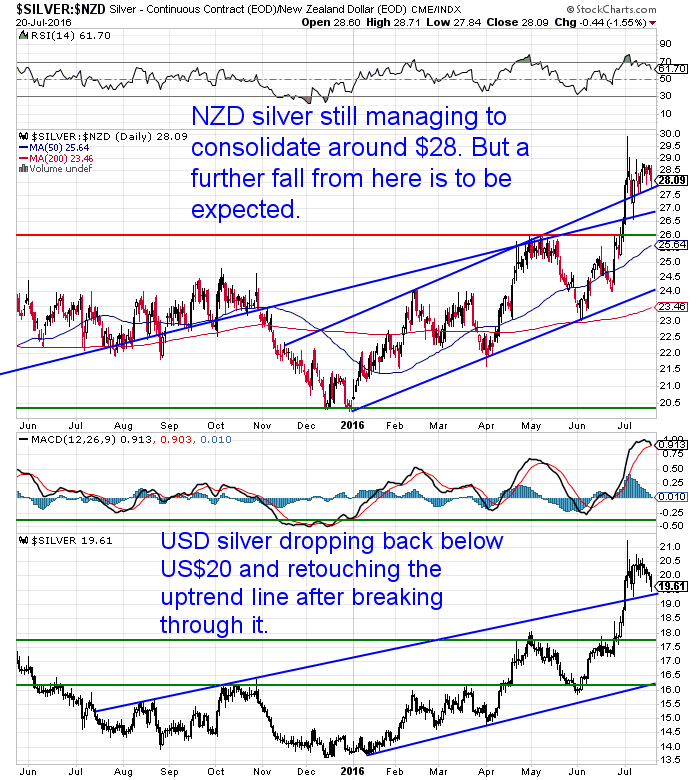 The gold miners index looks to be finally following gold lower. So this is a bit more evidence that a consolidation if not an actual decent correction is due. 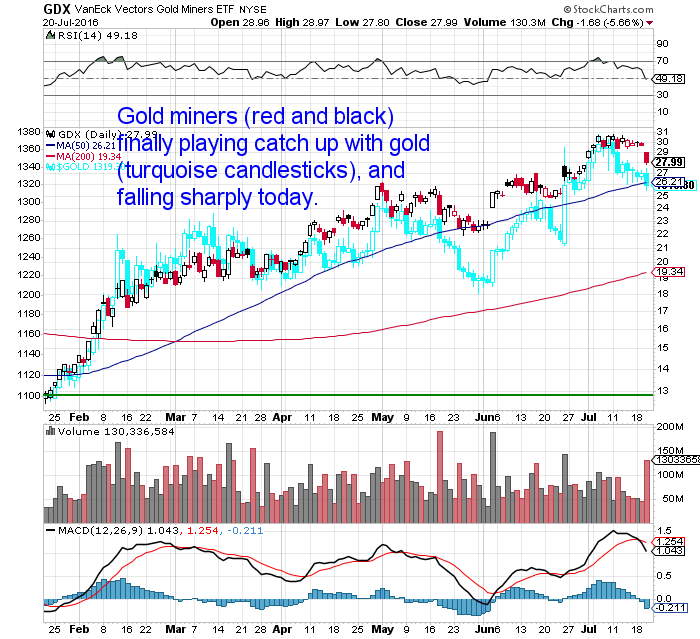 But will it be a deep correction? There still seems to be plenty of money on the sidelines as Ronni Stoeferle reiterated in his latest In Gold We Trust Report. (See page 135 of the extended version).

“…we don’t expect a very deep correction, since it appears as though many potential buyers are waiting on the sidelines, eager to buy dips. Relative strength in silver and mining stocks gives us confidence as well. Positive seasonality in the second half of the year should also provide a tailwind. All in all, conditions for the new bull market to become firmly established appear to be quite favorable from a technical perspective.”

Survey Results: How to Sell Gold and Silver

Thank you if you completed our survey last week. We’re still trawling through all the responses and suggestions. So we’ll have more to share with you in the coming weeks no doubt.

However a common request was for more information on how to sell your gold and silver when the time comes.

In response we’ve added an indicative buy back price for gold and silver to this week’s email. See the table at the start of the email just under the spot prices table.

Plus if you get our daily price alert email these are also included in that now.

Also we’ve put together a summary article on how to sell gold and silver. This includes some ideas on how to determine when to sell, as well as the specifics of actually selling.

Hopefully this answers a few questions at least. If there’s any gaps by all means email us back with what they are please!

How to Sell Gold and Silver Bullion 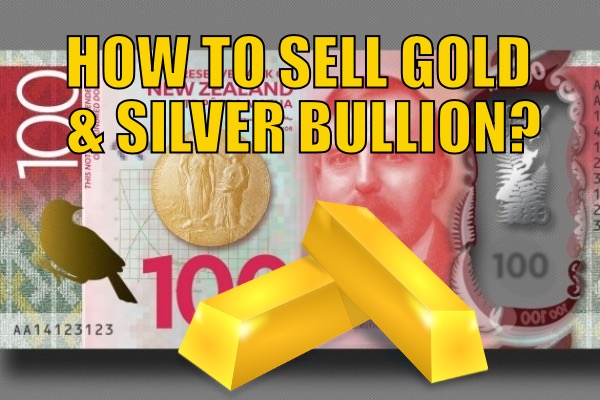 The winner of the 2 inflatable solar lanterns will also be notified by email today.

RBNZ: First they taketh and then they giveth back

The pointy heads at the Reserve Bank have been busy this week.

Then this morning the RBNZ made an announcement clearly designed to push the NZ dollar lower – which it succeeded in doing. They strongly hinted at further interest rate cuts.

The bank economists are coming round to our thinking yet again and some have predicted the OCR will be dropped to as low as 1.5%.

Our theory has been if much of the world is going negative, New Zealand can certainly get closer to zero!

So what will the upshot of these moves be?

Perhaps they’ll slow things up for a bit.

But we can see some reasons why the RBNZ might not get what they want.

Soon after the announcement on tougher loan to value ratios, we read one well reasoned email from a mortgage broker outlining the issues people will face in the short term.

Investors with  2 properties with one lender who are looking to sell one or refinance one might find they don’t get to keep as much cash as they thought they would.

However he also outlined how the next tier non bank lenders actually have pretty decent rates and don’t have to abide by these new restrictions.

So odds are things might slow up initially, but investors will find ways to get around these restrictions still. And the rates he mentioned currently are before any interest rate cuts by the RBNZ. So these non bank lenders interest rates could actually get lower yet as well.

But the central planners continue to believe they can cut rates ever lower while making adjustments elsewhere and keep everything honky dory.

Maybe for a while. But not forever.

We spotted a couple of articles that we thought are worth reading in full this week. So rather than taking a few excerpts, below are links to the full articles.

Is The BIS Setting Up The World For Another Meltdown?

Dr Stephen Leeb outlines his theory as to why the Bank for International Settlements (BIS) didn’t include gold as a tier one asset in its Basel III recommendations. And what this means now.

SOMETHING BIG HAPPENED IN THE GOLD MARKET: Must See Charts

This article covers a fair bit of ground but you can skim through to the second half where the charts are. A key paragraph discusses the makeup of the gold futures market:

We’ve reported previously as to how similar the current gold market appears to that of the mid 1970’s. This week we stumbled across an article with a chart that visually shows this. It also made some interesting projections if history continues to rhyme.

“The rise and fall of market prices often display patterns that repeat over the years. And we could be seeing that happen with gold prices.
In the 1970s, gold rose from a low of US$35 per ounce in 1971, to a peak of US$180 in late 1974. From there gold experienced a correction, falling nearly 40% to US$110 in August 1976. But from that low, gold mounted an historic rally. By June 1978 it was back to its previous high.
Then gold went nearly parabolic, with a frenzied surge to US$850 in January 1980.
It’s fascinating to see that the current gold bull market shares a very similar pattern – to this point – of the ’70s gold market.

Gold is currently about 26% above its November 2015 low. This is equivalent to gold being at US$132 in November 1976. If today’s pattern repeats that of the 70s, gold would peak at around US$6,800 over the next three or four years. The chart below compares the percent change in gold prices of the two bull markets, 1970s vs 2000s.
If history repeats itself, a huge jump in gold prices is coming. 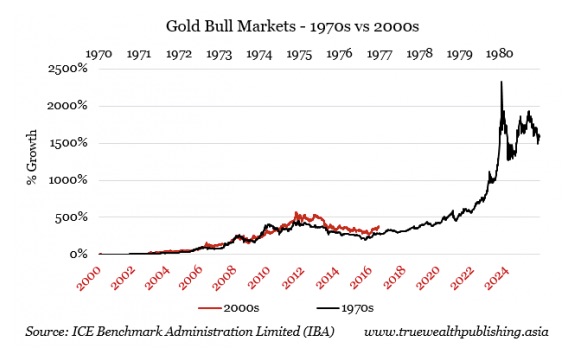 In the current bull market, gold reached an all-time high in August of 2011 of US$1,888, but fell to a low of US$1,056 in November 2015. Is it possible that the November 2015 low marked the end of the correction phase of another long-term gold bull market? Will US$6,800 gold become a reality over the next few years?”
Source: This chart shows why a 500% gain in gold prices isn’t crazy

We prefer to think of gold and silver as financial insurance. But it doesn’t hurt if your insurance policy also has some potential hefty upside and ability to increase your purchasing power a few years down the track either!

We have free shipping on boxes of 500 x 1oz Canadian 9999 purity Silver Maples delivered to your door via UPS, fully insured until you sign for them.

We wouldn’t be surprised to see the wait times increase for these soon and quite likely the premiums too. 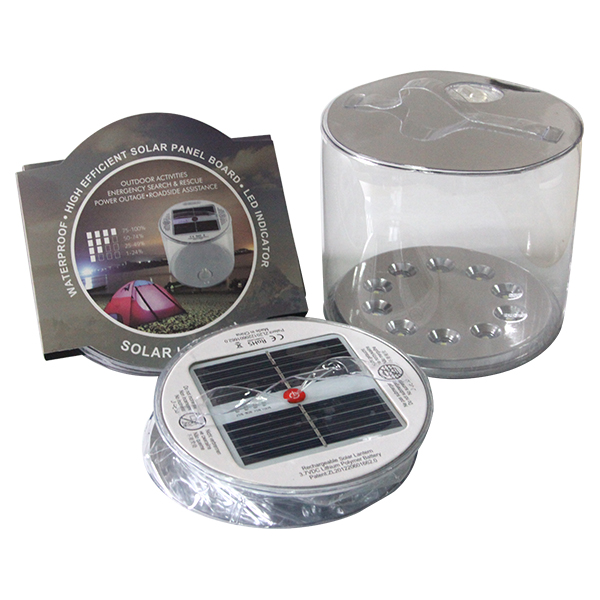