Home / Syndicated Articles / After Trump, Brexit… December 4 is the Next Flashpoint in the Global Populist Revolution

Learn about the line up of events bubbling to the surface in multiple countries in the European Union currently. See why it’s not just the pending results in the Italian referendum due out tomorrow to worry about…

After Trump, Brexit… December 4 is the Next Flashpoint in the Global Populist Revolution

On December 4, Italy is holding a referendum that will determine the fate of the entire European Union.

Donald Trump’s victory—which shocked Europe’s political and media elite—gives the populists backing the “No” side of Italy’s referendum the political rocket fuel they need for a virtually guaranteed win.

That momentum will be all but impossible to reverse. Anti-elite sentiment is rising on both sides of the Atlantic. And I bet the global populist revolution will continue.

If Italians buck the establishment—and it looks like they will—it will clear a path for a populist party to take power and for Italy to exit the euro.

If that happens, the fallout will be catastrophic for global markets. The Financial Times recently put it this way:

An Italian exit from the single currency would trigger the total collapse of the eurozone within a very short period.

If the FT is even partially right, we’re looking at a possible stock market crash of historic proportions. This is why we’re watching the December 4 referendum so closely.

The referendum is meant to concentrate more power in Italy’s central government. On that point alone, everyone should oppose it. The centralization of power never leads to good things.

A “Yes” vote is effectively a vote of confidence in the current pro-EU Italian establishment. This is what the global elite wants.

A “No” vote is how the average Italian can give the finger to the faceless EU bureaucrats in Brussels, whom many blame—quite correctly—for their problems.

Trump’s win has been a double whammy for Italy’s pro-EU establishment.

First, it emboldens the populist forces fighting the referendum.

Second, it humiliates and politically castrates Matteo Renzi, the current Italian prime minister. Renzi took a rare step when he openly endorsed Hillary Clinton. He was the only European leader to do so.

As one of Renzi’s rivals said after Trump’s victory, “Matteo Renzi is politically finished from today, he’s a dead man walking.”

Other Italian politicians are furious that he weakened Italy’s standing with the new Trump administration.

It’s hard to see how Renzi could get himself out of the hole he’s dug.

It Started as a Joke

In 2007, Beppe Grillo, an Italian actor and comedian, launched Vaffanculo Day. “Vaffanculo” is Italian for “f*** off.”

Grillo and his followers used V-Day to bluntly express their displeasure with Italian establishment politicians, using imagery from the movie V for Vendetta.

Now, what started out as a joke has become Italy’s most popular political party…

According to the latest polls, M5S is now the most popular party in Italy. It won mayoral elections in Rome and Turin earlier this year.

M5S is riding a wave of populist anger at entrenched political elites over economic stagnation. Italy has had virtually no productive growth since joining the eurozone in 1999.

M5S blames Italy’s chronic lack of growth on the euro. A large plurality of Italians agrees.

M5S has promised to hold a vote to leave the euro and return to Italy’s old currency, the lira, as soon as it’s in power. Under the current circumstances, it would probably pass.

After the Brexit vote and Trump’s win, M5S has joyfully predicted that Renzi will be the next casualty in the global populist revolution.

It’s crazy. This is the explosion of an era. It’s the apocalypse of the media, TV, the big newspapers, the intellectuals, the journalists… This is a wide-ranging F*** off. Trump has pulled off an incredible V-Day… There are similarities between this American story and the Movement.

A “No” vote in the December 4 referendum means M5S could come to power in a matter of months.

A populist tsunami is about to wash through Europe. It will drastically change the Continent’s political landscape in a way not seen since before World War II.

This wave will flush away traditional “mainstream” parties and usher in anti-establishment populists who want to leave the European Union.

It’s already hit the UK in the form of Brexit, killing David Cameron’s pro-EU government in the process.

Italy is the next flashpoint.

A “No” vote in Italy is virtually assured at this point.

But it won’t be the end of the anti-elite surge. Voters in Europe’s biggest countries could soon throw out their “mainstream” parties in favor of populist and Eurosceptic alternatives.

Austria is holding a presidential election, also on December 4. It’s actually a redo of an election held in May, where a populist candidate, Norbert Hofer of the Freedom Party, barely lost.

Austrian courts found irregularities in the results and ordered a prompt new election. But when opinion polls showed the populist candidate in the lead, the government delayed the vote until December 4, giving a lame excuse about faulty adhesive on absentee ballots. Despite the foot-dragging, Mr. Hofer looks set to win the December 4 vote.

France has a presidential election next spring. There’s a chance that Marine Le Pen, leader of the Eurosceptic National Front party, will do better than many expect. After more than a decade of disappointment under presidents François Hollande and Nicolas Sarkozy, French voters are clamoring for something different.

Rajoy now leads a severely weak minority government. The political power of the Spanish populist parties is only expected to grow.

Angela Merkel, the chancellor of Germany, embodies the European establishment more than any other politician. Her party suffered a series of stinging defeats in regional elections this year, mostly because of her signature lax immigration policies, which have flooded Germany with migrants.

Merkel’s troubles have only helped the Alternative for Germany, a new populist party surging in popularity. The party could pose a real problem for Merkel in the 2017 federal elections.

As the Netherlands approaches elections in March, Geert Wilders’s Party for Freedom, which advocates leaving the EU, is basically tied in opinion polls with the establishment parties.

How to Profit from the Tsunami…

As populist, Eurosceptic parties surge, the entire European Union is looking shakier by the day.

One Italian politician correctly put it this way: “The euro is melting away like a gelato left out in the August sun.”

Our thesis for the collapse of the EU not only stands… it’s getting stronger and stronger.

There are potentially severe consequences in the currency and stock markets. We are approaching a global financial meltdown of historical proportions. It could strike America on December 4, 2016, as Italian voters decide the fate of the European Union itself.

It could either wipe out a big part of your savings… or be the fortune-building opportunity of a lifetime.

New York Times best-selling author Doug Casey and I just released an urgent video with all the details. Click here to watch it now. 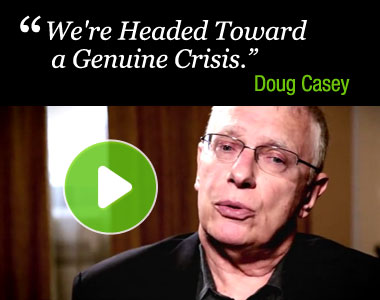 The article After Trump, Brexit… December 4 is the Next Flashpoint in the Global Populist Revolution was originally published at caseyresearch.com.