A change of trend from last weeks newsletter.

NZD gold continues to rise slowly but steadily in the uptrend it has been in for the past 12 months. While USD gold is still trading in a sideways pattern. 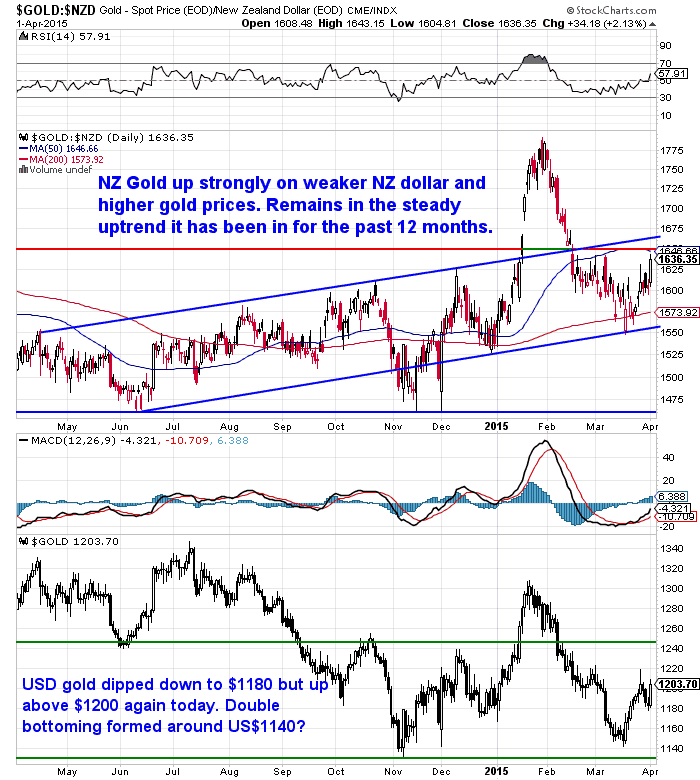 NZD silver also looks to have made a “higher low” around $21 in March. Silver has been trending higher since November and has surprisingly outpaced gold since the start of the year. 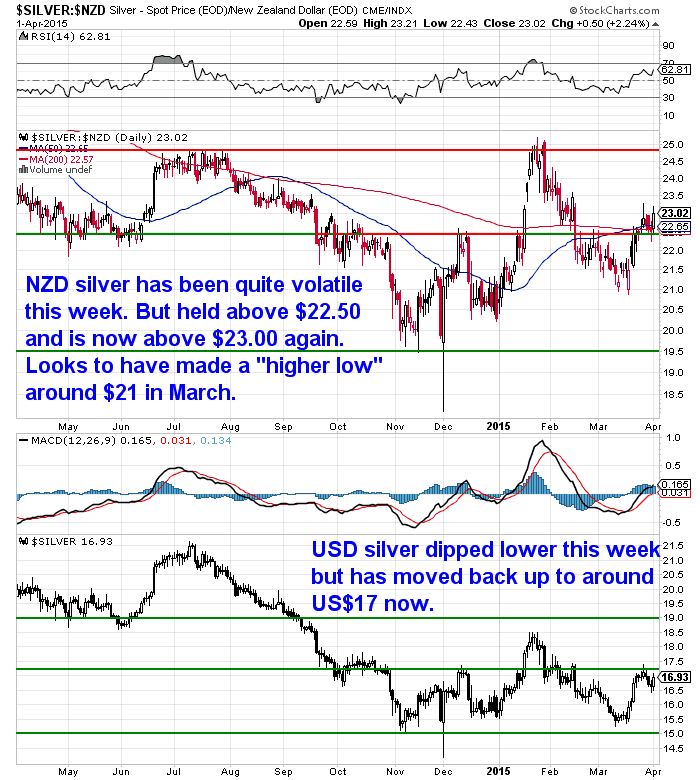 So why is gold rising?

Perhaps because people expected it to fall.

“net long positions in Gold have dropped to their lowest since Dec 2013 and outright Gold short positions rose for the seventh week in a row to the highest since data began in 2006.”

Their chart shows that overall gold shorts have never been higher… 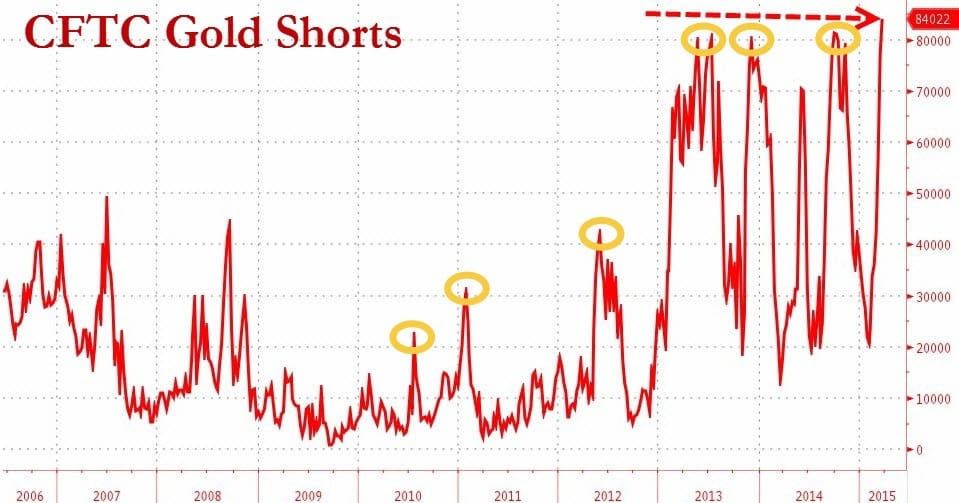 So gold short positions are at extreme highs – but what does this mean?

Well, we quickly threw a chart together looking back at a gold chart over a similar period.

Turns out, past extreme highs in short positions all saw the price of gold bounce quite sharply higher over the next few months, if not longer…

So could be a decent move higher coming if past extremes are any guide. This would fit in nicely with the US dollar also dropping lower from here. Given how many people expect it to keep rising from here, we won’t be surprised to see the USD fall for a spell.

Coincidentally the day after we did this the World Gold Council (WGC) published some research on these topics too. While many like Koos Jansen have railed against the WGC’s numbers when it comes to gold demand in China, and while many also refer to them as being part of the “Dark Side”, we still keep an eye on their reports as there is often a gem or 2 of information in them.

A quick synopsis of the report:

“Gold in a rising dollar environment

Generally, there is an inverse correlation between gold and the dollar. However, our analysis shows it is asymmetrical: the gold price increases more when the dollar weakens, than it falls when the dollar strengthens. In our view, the dollar’s relationship with gold has changed dramatically over the past decades and is likely to shift further as demand moves East and the world moves to a multicurrency system.

Interconnections: the factors that drive gold

The market may be wrong about gold and US interest rates

Many investors believe that higher US interest rates will be certainly bad for gold. Our analysis shows that other factors – some positively correlated to the economic growth that often accompanies rising rates – can have more influence on the gold price. We also highlight gold’s portfolio benefits at a time when stocks and bonds may deliver lower-than-average returns in coming years.”

You need to register (for free) to read the full report but there is a decent infographic on the page where you don’t.

RBNZ: Warning of a problem they caused

Just as we hit send last week, the RBNZ released a report warning of the rising private debt levels in New Zealand. Private debt is edging steadily closer to the 2008 peak of 175% of disposable income (164% as of Sept 2014).

They discuss the causes and even name very low interest rates as one of them.

“Since late 2011, however, rising house prices, easing credit conditions (including an increase in lending at high loan-to-value ratios during 2012-13) and low interest rates have contributed to a pick-up in the growth rate of household debt (albeit to a rate much lower than the average during the last financial cycle). “

But not surprisingly, no mention that they (the RBNZ) are to blame for these anyway in the report!

So they are warning of higher private debt levels, which are caused by easy credit conditions and low interest rates – both controlled by the RBNZ.

In the form of lending rules that specifically allow banks to lend more against residential property and in the form of the Overnight Cash Rate (OCR) being kept historically low.

To be honest the report doesn’t contain any particularly startling information. There’s some charts showing NZ housing is overvalued on Price to Rent and Price to Income basis.

But we just find it very amusing that the RBNZ can warn of problems it is playing a large part in creating, do it with a straight face, and have no one pull them up on it!

Meanwhile the government has put in place its election bribe “Homestart” subsidy for first home buyers to encourage some more young people to get massively into debt.

Gee – wonder what that will do to house prices?

Odds are the RBNZ’s “warning” on private debt will prove correct at some stage. It’s not quite 2007 all over again but we seem to be steadily getting up there.

We’ve read many a prediction on when China will next announce its true gold reserves.
Some have been and gone, some still to come.

The National Inflation Association (NIA) believes 2015 is the year and maybe even in the next month.

NIA believes that China has been aggressively accumulating a massive reserve of gold, with a goal of positioning the RMB to replace the USD as the world’s reserve currency. Because China has such large US Dollar reserves, it must shift its USD holdings into gold in secret. Once the public becomes aware of just how large China’s gold reserves have become, we will see a worldwide run on the dollar and rush into gold.

For China to reach gold reserves worth a healthy 10% of its FOREX reserves to strongly position the RMB to replace the USD as the world’s new reserve currency, China would need to increase its gold reserves by 844.3% to 9,953 metric tons. Based on gold’s average price over the last six years of $1,365 per oz, this would have cost China an estimated $390.54 billion. A cost of $390.54 billion is equal to just 31.4% of the $1.243 trillion in US Dollars that China needed to invest outside of US Treasuries. If China has increased its gold reserves to 9,953 metric tons, it would now have the world’s largest gold reserve, surpassing America’s purported gold reserve of 8,133.5 metric tons!”

They go into quite some detail as to how China’s holdings of US treasuries have altered over the past 9 years and they make some decent educated guesses as to how much of this might have gone into gold. It’s worth clicking through to read the whole piece and see their charts:

NIA makes the argument that China and Russia are working together to dethrone the USD as the worlds reserve currency. It certainly looks that way.

However another angle and one we favour is that this might all be a game on the surface.

If you’ve ever read the Creature from Jekyll Island you’ll know how the money masters have been behind just about every war in the past century or more. Often financing both sides, so they win whatever the result. Even some you’d not expect like playing both sides in the Russian Bolshevik Revolution.

So this other argument is that there is not a “war” between the USA and China/Russia. But rather they are all part of a steady movement to a global currency using the IMF’s Special Drawing Rights (SDR).

An article we read this week does an excellent job of explaining the changes that are coming up in the next 10 months in the international monetary system in particular in regards to the SDR. It also backs up the NIA timeline with regards to China announcing their gold reserves.

The makeup of SDR basket will once again be adjusted on 1 January 2016. There will be a meeting to review the weights in May 2015. This will be confirmed in October, 2015.

“The upcoming SDR review will see the inclusion of the Chinese yuan, or RMB, in the basket composition.  Both the IMF and China have been recently discussing this fact and have openly acknowledged that it will happen.”

You may well have read recent reports of this too with publicity around meetings between the IMF’s Christine Lagarde and Chinese Premier Li Keqiang:

“Chinese Premier Li Keqiang on Monday asked the International Monetary Fund (IMF) to include the Chinese currency in the special drawing rights (SDR) basket, endorse the yuan as a global reserve currency alongside the dollar and euro.”

So the timeline seems to be on track. The article above also theorised that it’s possible gold may be included into the SDR basket. Even if it’s not, a Chinese announcement of their increased gold reserves would add weight to the argument for the Yuan being included in the SDR.

There are certainly a lot of changes due to come this year in the global monetary system.

Make sure you have a hedge in place before these take place. As we could see some even more serious volatility in exchange rates this year when they do.

2 thoughts on “Announcements Due: China Gold Reserves and SDR Inclusion”