Home / Weekly Newsletters / So is a Brexit a Big Deal For Gold and Silver?

Unless you’ve been out in the bush for a week you couldn’t have escaped the Brexit leave vote outcome that has been the main talking point on the airwaves.

This had a MAJOR impact on local precious metals prices.

Gold in NZ Dollars saw a massive rise of $150 per ounce last Friday as the Leave vote became reality! As far as we can recall that is a record one day rise in NZ dollar terms. (unless a trainspotter out there can tell us otherwise?)

However NZD gold still didn’t manage to close above the overhead resistance line at $1920 and has since then dipped lower.

The chart below shows gold in NZ Dollars continues to trade within the sideways range it has been in since February. 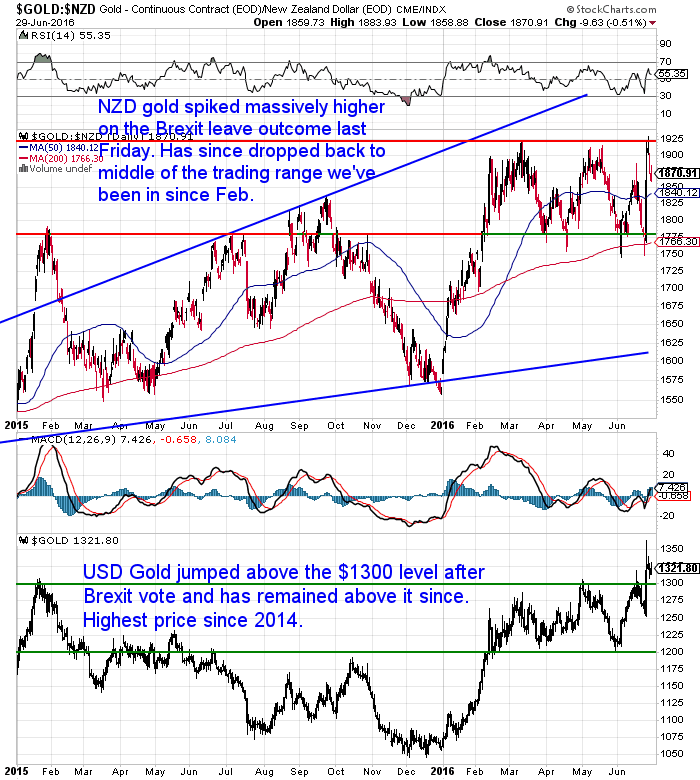 Silver too rose sharply although not to the degree gold did. However today silver bounced higher again and has touched the $26 overhead resistance mark, but like gold is yet to breach this next level of resistance. 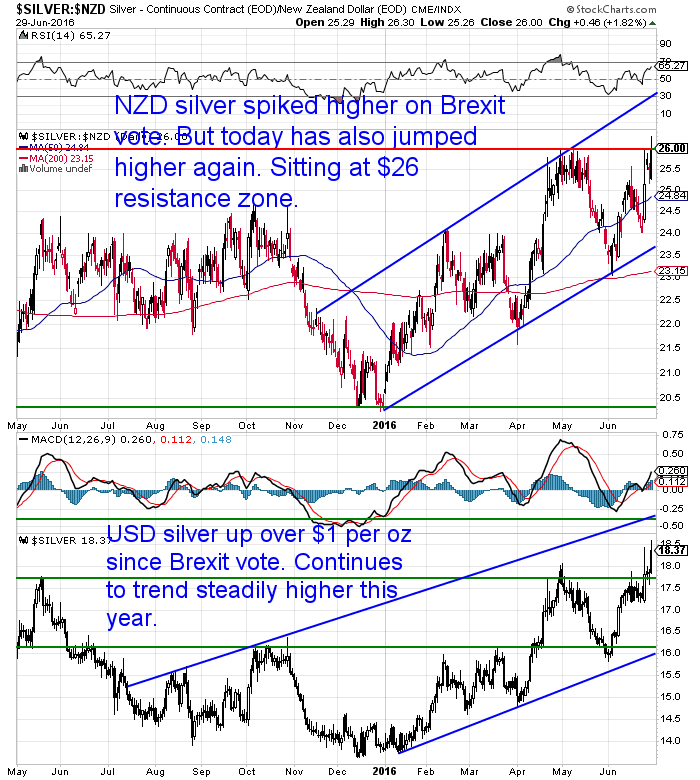 This jump in silver has pushed the gold/silver ratio back down to 72. Meaning it takes 72 ounces of silver to buy an ounce of gold. This is back down to the level it reached in March. 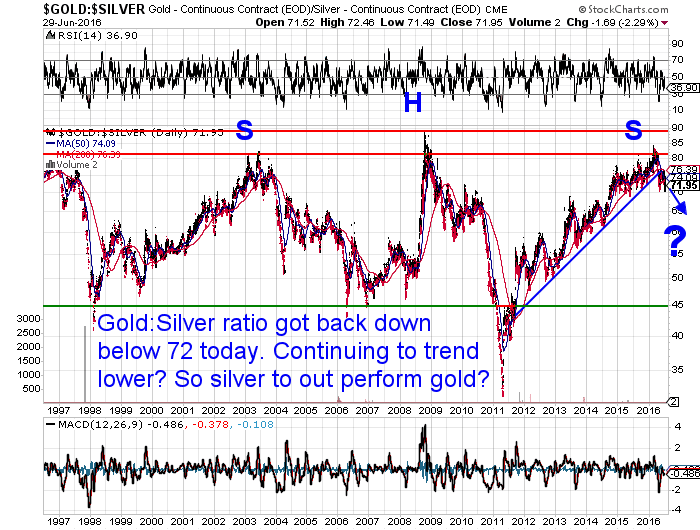 Part of the huge jump in prices was the impact of a sharp fall in the NZ dollar as a result of the shock Brexit vote. The Kiwi dollar moved over 2 cents lower on Friday. Since then it has bounced back again though. The dollar also remains above its 50 day moving average so it is still in an uptrend against the US Dollar. 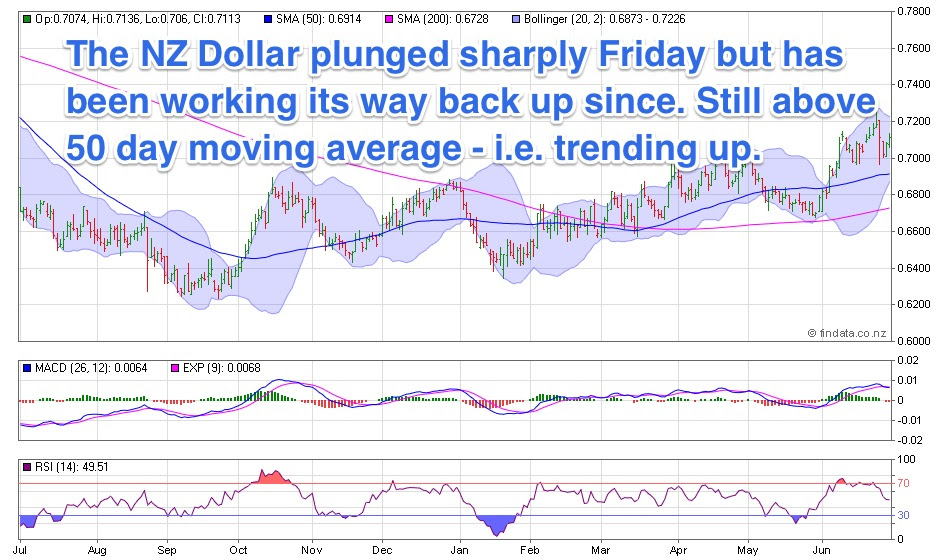 What’s Ahead After the Brexit Leave Vote?

We were as surprised as the next guy to see the result come through on Friday. Jim Rickards analysis of the weakness in the bookmaking odds was spot on as it turned out.

We’ve read a lot of opinions on the result and its impact over the past week. We’ve posted a number of different Brexit articles on the site this week too. All with slightly different opinions on why it happened and on what it means (see the links at the end of this email for all those articles).

The overall theme amongst the various articles we’ve posted is that it will be the European Union that will suffer more in the long run than Britain itself. Maybe, that it could even be the first step in the end of the union itself.

Our guess is the British Pound may not fall that much further from here but that the Euro could.

This of course is completely contrary to all you’ll hear in the mainstream where the scaremongering is that the exit vote will lead to dire outcomes for the UK. Like a collapse in trade and a rise in terrorism.

Even an ex-Governor of the Bank of England reckons the “doom and gloom story seems to be wildly exaggerated”:

“There are some threats from the EU that will no longer be relevant. So, the idea there might be a tax on financial transactions – which George Osborne challenged, took to the European Court of Justice and lost his case – now we won’t be involved in that, and my guess is that any attempt in Europe to impose such a tax will never take place now because business will simply come to the City… There are obviously uncertainties in the short run… but the idea that this is a doom and gloom story seems to be wildly exaggerated.”

In fact, George Friedman commented on a little publicised announcement over the weekend that shows the EU itself is already backtracking and looking to make changes to ensure it’s survival:

“Today, [Saturday] foreign ministers from the European Union’s six founding member states issued an extraordinary statement, declaring that they will “recognize different levels of ambition amongst Member States when it comes to the project of European integration.” This was a landmark capitulation by the major European powers, accepting the idea that uniformity across the bloc is impossible and nations can choose the terms of membership.

The ministers – representing Belgium, France, Germany, Italy, Luxembourg and the Netherlands – publicly recognized that there is discontent across the bloc. The statement said that they will “focus our common efforts on those challenges which can only be addressed by common European answers, while leaving other tasks to national or regional levels.”

John Mauldin paraphrased this nicely as:

“We recognize that our EU policies aren’t working for everybody. That’s okay. We just have to figure out how to make sure that everybody gets what they need, even if it means less control from Brussels.”

We’re all for less bureaucracy, and much, much smaller nation states (how about city states instead even?). So this outcome seems like a good one overall.

But we share Chris Duane’s concerns (see the article below entitled “The Brexit Conspiracy”) that perhaps this was part of the plan all along?

That is, maybe the “City of London” simply wanted off of the sinking ship that is the EU? Maybe this was what they wanted all along?

So is a Brexit a Big Deal For Gold and Silver?

We’d say in the long run no. We’ve read opinions as to how this will send gold soaring. But we’d guess we’ve seen the pop due to the surprise already.

If gold and silver move higher from here it likely won’t be that much to do with the Brexit itself. As we said last week gold and silver were already rising before the referendum was even announced.

It may be because markets are now pricing in further US interest rate rises as being very unlikely. In fact as Bloomberg reports a rate cut is now seen as more likely:

“Circle Jan. 31, 2018, on the calendar. That’s the soonest the Federal Reserve hikes next. At least if money market derivatives are to be believed. Traders, who have consistently been better at projecting the path of interest rates than the Fed itself, are now pricing in a greater probability that policy makers will cut rates in upcoming meetings than raise them. They don’t assign more than a 50 percent chance of an increase until the beginning of 2018, and don’t price in a full rate hike until the final quarter of the year.”

According to the NIA, the change in US interest rate expectations is very bullish for gold when looking back at past numbers:

If you look at this year’s pattern of the implied forward 12 month change in the Fed Funds Rate, it is almost an exact repeat of 2010/2011 when gold soared to $1,895 per oz. With gold surpassing it “key breakout point” on Friday of $1,307.80 per oz, it is undoubtedly about to make a significant move higher. 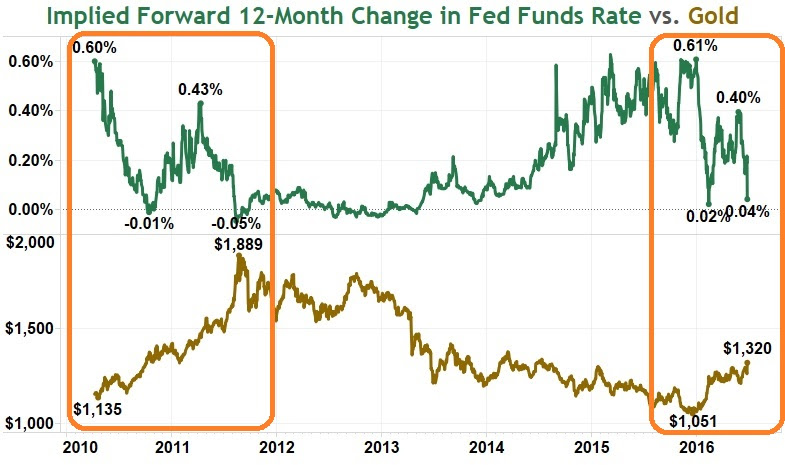 An interesting feature of the jump in gold and silver was that this happened while the US dollar also rose. The prevailing opinion is that gold is simply the inverse of the US dollar. Meaning gold rises when the USD falls and vice versa.

Down here in NZ this meant the NZ dollar weakened while US dollar gold and silver prices rose. So we got a double whammy and hence the $150 price pop. We wouldn’t be surprised to see more of this in the future.

Or put another way, gold may rise against all currencies at once even while the US dollar could be rising against other currencies at the same time.

We’d say this won’t be the last time we see such massive one day jumps in price.

Rickards: Contagion May Set In

Given Jim Rickards did so well with his call that the odds of a Brexit Remain vote looked much longer than predicted, well give him the last word today too.

“But that’s not the end of the story. When markets move to the extremes we just saw, contagion sets in. Leveraged players have to sell liquid assets to get cash to meet margin calls on the illiquid losing positions.

We saw this in 1998 and 2008, and we’re seeing the early stages of it again. This is something that can start in one day but does not necessarily end in one day. It can take weeks to find out where the bodies are buried as hedge funds and dealers gradually go bankrupt because of Brexit-related losses.

I’ll stay on this story and find out who is the Lehman or AIG of this new market meltdown.

The problems don’t end there. What happened to markets as a result of the Brexit vote is not a one-time event. It’s a reflection of the following:

* Elites are out of touch with the everyday citizens

All of these elite weaknesses were on full display in the Brexit market fiasco unfolding in real-time. Fortunately, many of my readers were saved from this disaster. But the elites still don’t get it. They cling to their elite bubbles, flawed models and bad policy prescriptions. This means that Brexit-type fiascos will keep happening.

…Here’s a short list of major events in the months ahead with the potential to produce the same kinds of huge gains we just saw from Brexit:

* Europe will begin to ignore U.S. sanctions on Russia and get back to business as usual

* Physical gold shortages are cropping up all over the world

* Geopolitical tensions are rising in the South China Sea, Syria, Turkey, Venezuela, Libya, North Korea and elsewhere around the world

We continue to be unsure whether this is all a planned outcome or “directed history” as the Daily Bell likes to say. Regardless it looks like volatile times are ahead. Make sure you are prepared.

Check out the articles below for various opinions on Brexit, including its impact on gold and silver.

Todays price for a “monster box” and delivered to your door via UPS, fully insured is $15,250. 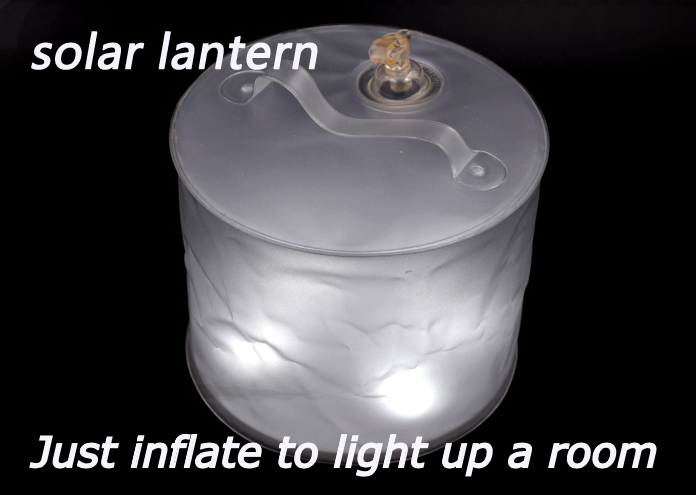 2 thoughts on “So is a Brexit a Big Deal For Gold and Silver?”