Home / Weekly Newsletters / Do You Have to Document Your Precious Metals Purchase?

We’ve got a sick child at home that’s needing a bit of TLC so we haven’t kept as close an eye on the news as we usually do sorry.

But a reminder that we post a number of other articles we find of interest on our Facebook and Twitter pages as well. So check those out if you want some more bedtime reading. Overnight NZD gold has pulled back sharply after moving steadily higher for the past 3 weeks or so. It remains in the steadily rising uptrend it has been in for the past year. It’s been a long while since we saw a gold article in the NZ herald or on business news here in NZ. A good sign that gold is quietly rising and not really creating any real buzz.

This uptrend is also shown in the monthly NZD gold price chart below (a monthly chart simply plots the closing price at the end of each month instead of each day like the other charts we usually post. It’s a good way to look at the long term trend in whatever it is tracking).

NZD gold broke out of the 3 year downtrend at the start of the year. While not rising strongly it does still remain above the downtrend line. Another good sign. 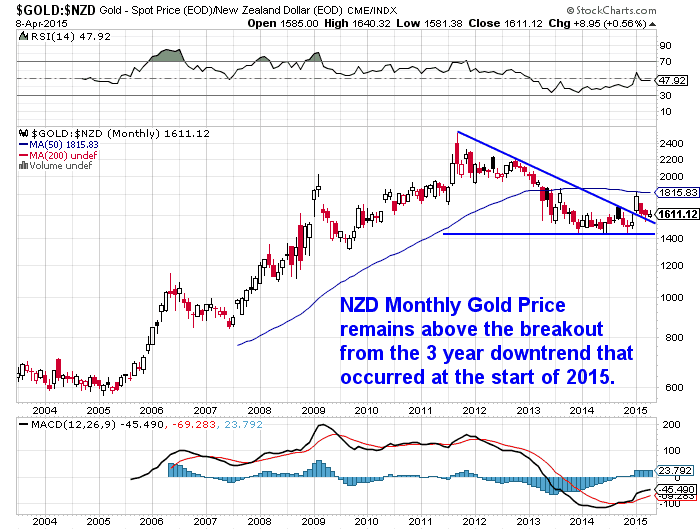 NZD silver is also still in the rising uptrend it has been in since the end of last year, even after falling sharply overnight. We could see a further pull back to the low $21 range yet too. 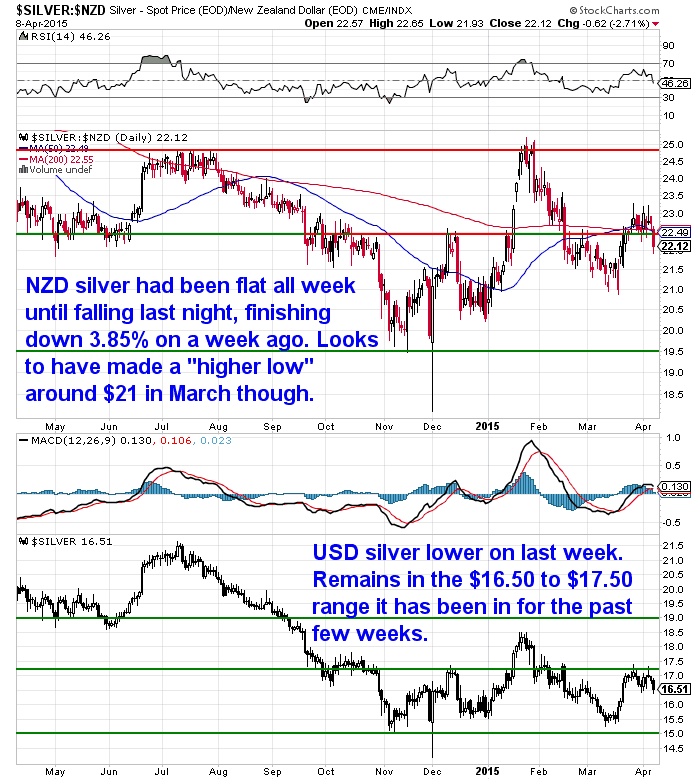 The Big Berkey Gravity Water Filter has been tried and tested in the harshest conditions and has time and again proven to be effective in providing safe drinking water all over the globe.

This filter will provide you and your family with over 22,700 litres of safe drinking water. It’s simple, lightweight, easy to use, and very cost effective. And right now you can get one for $157 less (that’s 27% less) than you can via Amazon. Plus you’ll get FREE SHIPPING!

If you’ve seen the news this week, all the talk has been of the Kiwi dollar reaching parity with the Aussie dollar.

Of course when a topic is in the news this much maybe it has gotten a bit overblown?

So what do you know? The Aussie Reserve Bank kept interest rates on hold and the NZD promptly dropped back against the Australian Dollar.

You’ve no doubt read about the good points and bad points of this. Cheaper holidays to the Gold Coast. But lower Iron Ore prices and timber prices as a result of China buying less of both is not so good for us.

It will be interesting to see if the Kiwi can move higher still from here and get above 1 to 1.

The US Fed Continues to Fool Us

The US Fed minutes released overnight didn’t reveal much. Just that there are differing opinions amongst them…

“Fed minutes reveal divergence on first rate hike
Several Federal Reserve policymakers said last month the central bank is likely to raise its benchmark interest rate in June but “others” said the move will probably occur “later in the year,” according to minutes of the Fed’s March 17-18 meeting.The report is consistent with Fed policymakers’ forecasts, released after the mid-March meeting, that indicate the first bump in rates since 2006 is unlikely before September as the Fed awaits signs of a pickup in anemic inflation.”
Source.

The best thing we read on this subject during the week was at Daily Wealth:

“How the Federal Reserve Has Completely Fooled Us for Years

We must be idiots…

“Higher interest rates are just around the corner,” they tell us today.

The thing is, they’ve told us that over and over – since the Fed first cut interest rates to zero back in 2008.

The Fed has cried wolf, for more than six years. And we’re still panicking, looking for the wolf…

I suggest you ignore the Fed. I suggest you stick with my investing “script” – which my subscribers have been following for at least five years:

Three weeks  ago we mentioned Japan in our discussions of China. Here’s some detail from Sovereign Man on just how extreme things are getting in Japan today as well:

“As a percentage of GDP the government here is carrying more debt than anyone else on the planet.

At one quadrillion yen, the debt level is so high that it now takes the government 43% of its central tax revenue just to pay interest this year…

Through its policy of aggressively seeking to create inflation, the government is now guaranteeing that anyone who holds Japanese government bonds will lose money.

This makes government bonds no longer an investment or a store of value, but a charity case. At best it’s just another tax.

Throughout history governments have often overestimated how much their citizens are willing to accept.

Japan has a beautiful stoic culture that has been able to endure tremendous suffering. That said, everyone has a breaking point.

And that’s when you see that there’s a big difference between love of country and love of government.

Every time I’m in Singapore now, as I was just last week, my banking contacts report exponential growth in Japanese customers. Businesses, entrepreneurs, and investors are all moving money out of Japan and into Singapore.

Even Japanese banks are aggressively expanding, following the money out of their own country.

This is precisely when capital controls end up being imposed—when a trickle of capital fleeing turns into a flood.

We’re seeing the same things right now in many places around the world, with most of the attention now focused on Greece and other parts of southern Europe.

However, as Japan has the third largest economy in the world and is the most woefully indebted, it’s really the one to watch.

When the powder keg goes off that sets the global financial system ablaze, it will most likely be in Japan where the match is lit.”
Source.

We received a great question this week from a reader:

“How does one document the reason why one has purchased a precious metal?  Would a reason to safeguard from bank’s foreclosure or currency collapse be a reason?”

We’ve had some similar questions to this in the past so have some past articles to draw on. Here was our response:

Sorry for our slow reply. You weren’t forgotten – just hadn’t gotten the chance to put fingers to keyboard.

Saw your other email too where you said:

“Also, I wonder about declaring the reason for purchasing my other gold and silver which i did about a month ago from you guys.

I read some time ago that one must do this.”

As far as we are aware there is no need to report precious metals purchases to anyone. This might well change in the future as we have written about here, but for now purchases are not required to be recorded or reported in NZ by dealers or by the purchasers themselves:

Privacy: Are purchases of gold and silver in NZ reported? However your point about documenting the reasons for purchasing gold and silver is a good one. This could be more of a factor if/when you eventually choose to sell any of it. And might be a factor in what tax is or isn’t payable. This article goes into details on this. But it is still a murky area:

Capital Gains Tax on Precious Metals in New Zealand – Is There Any? 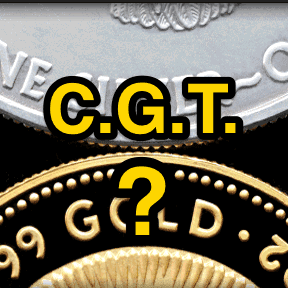 Of course you’ve got to own some gold or silver first before worrying about whether you need to document your purchase of if you might have to pay tax on it eventually.

So get in touch if you’d like to make your first purchase.