Michael Woodhouse: Which groups now pay most of the tax collected by the Government?

Hon BILL ENGLISH: Our tax and transfer system is highly redistributive, and the number of people paying income tax is surprisingly small. The lowest-income 43 percent of households currently receive more in income support than they pay in income tax. The 1.3 million households with incomes under $110,000 a year collectively pay no net tax—that is, their total income support payments match their combined income tax. The top 10 percent of households contribute over 70 percent of income tax, net of transfers—over 70 percent of income tax, net of transfers. This system is highly redistributive and we believe it is fair.

I asked the Minister’s office for the data that answer was based on, and the table below sets it out. 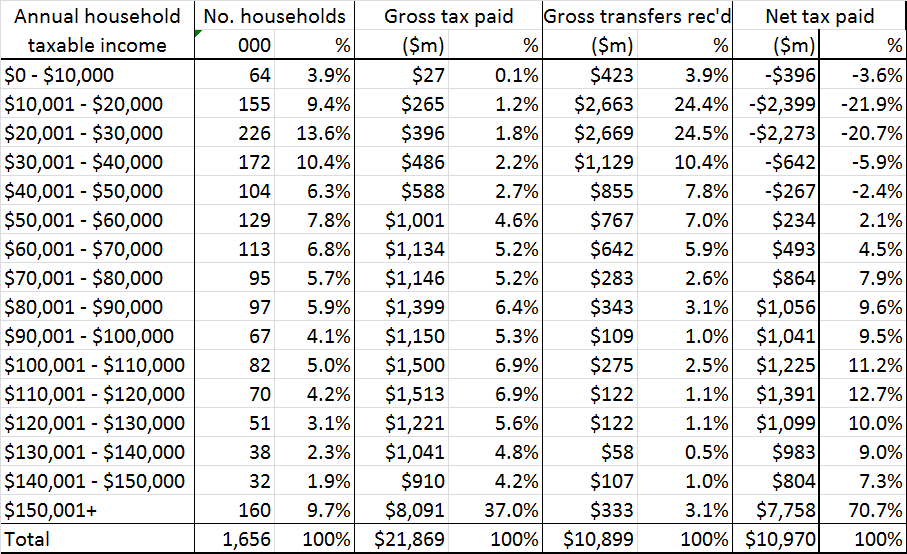 This data deserves a wider audience. The gross transfers includes Working for  Families, Accommodation Supplement, and  other benefits. It does not include NZ Superannuation . I suspect if you included that it would be even more dramatic.

So what does it tell us?

It tells us that overall households with income of $50,000 or below pay no net tax at all. Not only do they pay no net tax, they receive around $4.40 in benefits for every $1 of tax they pay. So they pay $1.7b in tax and receive $7.7b in welfare (and this excludes superannuation).

So the next time someone talks to you about fairness and tax, use the table above.

It is important that every New Zealander is aware of some basic facts that go to make up New Zealand’s taxation payment balance sheet.  It is not a matter of whether we are to the left, centre or right of the political spectrum. Politicians have an uncanny ability to speak in generalisations, pandering to the lowest emotions and promising what cannot be given.  That applies across the whole political spectrum.
Hopefully the attached will at least give you something to ponder over, and to use, when next the subject of who pays for what comes up.

Back to us at GoldSurvivalGuide…. So why are we sharing this with you?  Is it to influence how you vote in the coming election?  Well, as we mention in the intro to one of this weeks articles, “The Problem With Seeing Government as God” , we are apolitical here at GoldSurvivalGuide.  We don’t agree with either side but rather go along with Doug Casey that “voting only encourages them”.

Do what you have direct influence over

Rather we present this data to demonstrate that there is little impact your vote will have (sorry, as hopeless as it may sound).  With the vast majority of the population getting more than they pay in tax, we can count on this majority to keep voting to get more and more.  This is the trend in the western world and indeed the riots and protests in Europe are demonstrating this.

So instead we reckon focus on what you can have a direct effect on.  Namely securing what wealth you have and prepare for troubled times ahead.  And do what you can to increase any income coming in.

Money Printing will arrive in Europe

Speaking of Europe, gold rose sharply yesterday most likely on the back of worries over Italy.  It’s up a bit further again today and in NZD dollars is getting closer to previous highs.  The Italian government bond rates have risen sharply recently.  Italy has agreed to have it’s budget reforms “monitored” by the IMF.  So now Italy’s future depends on whether they will take the harsh medicine of reform.  Italy has the 3rd largest economy in Europe and a debt to GDP ratio of 120%, although a much smaller budget deficit than many in the European Union.  So they could pull themselves back from the brink of default yet.

However we have our doubts.  As we’ve just mentioned already the masses aren’t exactly taking the harsh medicine lightly the world over.  We have our doubts about Italy taking theirs.  But could they default?  That seems unlikely when Italian government debt is close to 2 trillion and vast amounts of it are held by German and French banks.  The European Central Bank will likely print currency to pay off the Italian debts and avoid major bank failures.  Germany will likely be the last to agree given their memory of hyperinflation in the 1920’s.  Speaking of which one of this weeks videos below is an interview with Adam Fergusson author of “When Money Dies”, a fascinating account of this period of hyperinflation.

As we’ve mentioned twice already the masses will want more and more but in our opinion until a fair and stable monetary system is again in place their standard of living will continue to be steadily (or perhaps rapidly) eroded.  On the topic of fair monetary systems, we saw an interesting video this week of former Fed Head Alan Greenspan again recently backing a Gold Standard.
Short video here: http://www.youtube.com/watch?v=yRJs5yL62BA

We say again as you may or may not know he wrote a brilliant essay in 1966 entitled Gold and Economic Freedom.  http://www.321gold.com/fed/greenspan/1966.html

We have to admit to being somewhat confounded by Mr Greenspan.  It is easy to label him a “sellout” to the dark side of the banksters.  But yet now he again seems to be returning to his golden roots.  Or is it that the money masters are happy to have him spread the word of a return to a gold standard of some kind as they perhaps intend to hold most of it when the time comes?

A reminder we will be in Sydney early next week for the Gold Symposium, so we expect to report from there as there will be a number of top speakers presenting and also some interesting panel discussions planned.  So stay tuned for that in the next 2 weeks.

And as always if you’d like a quote for gold and silver bullion bars or coins, be they local or imported give David a call on 0800 888 465 or email orders@goldsurvivalguide.co.nz

Have a golden week.

One thought on “Just who pays tax”