Precious metals have continued their climb higher this week.

NZD gold is up 1.37%, a good part due to the plunging NZ Dollar after the RBNZ interest rate cut this morning which surprised many.

NZD gold has continued to push up against the $1900 resistance level. It has traded in a narrowing pennant or wedge formation and will have to break out either way any day now. 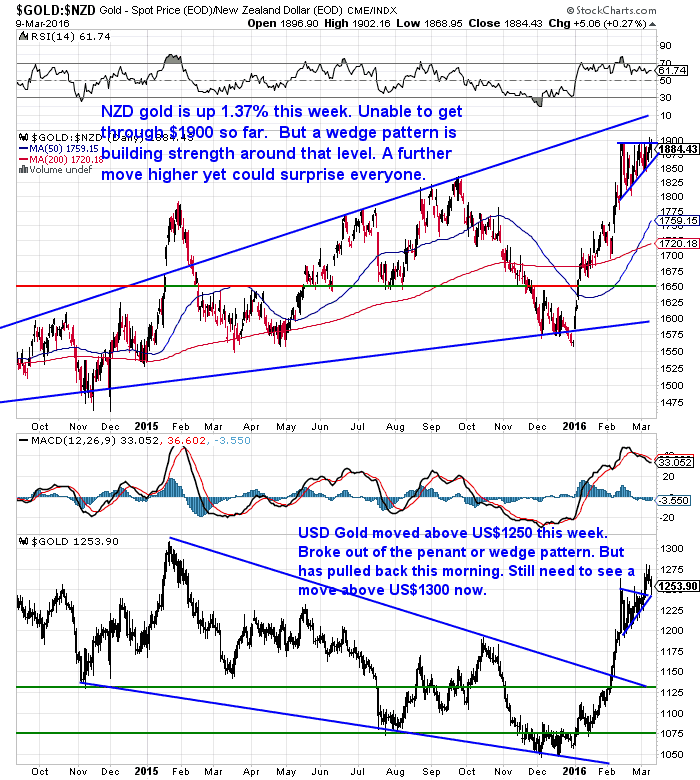 The USD gold chart (bottom half of below chart) shows that it recently broke higher out of a similar pattern. Although it has pulled back overnight.

Also of significance is that in both currencies the golden cross has occurred. This is where the 50 day moving average (MA) crosses over the 200 day MA.  Often a sign of a change to a bullish or rising trend.

As we wrote in our weekly email last Thursday, the US dollar gold price has been the main driver of the gold price in NZ dollars. That is, the NZ dollar has been relatively stable so far this year. So a move higher in US dollar gold could translate into a similar sized move in NZ dollar gold. (Below is a closer up view of the US Dollar Gold Chart from our daily price alerts email today). 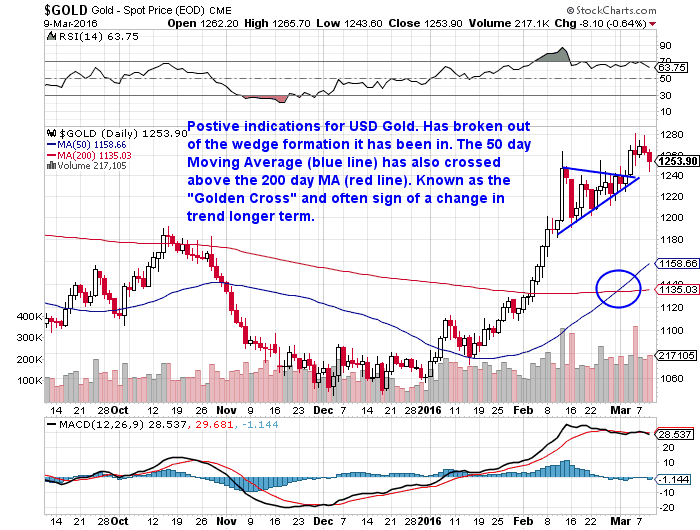 NZ Dollar silver continues to move in the sideways range it has been in for the past year. It is up above the 200 day moving average this week. $24.50 remains the key level that we need to see broken to indicate a sustained move higher. 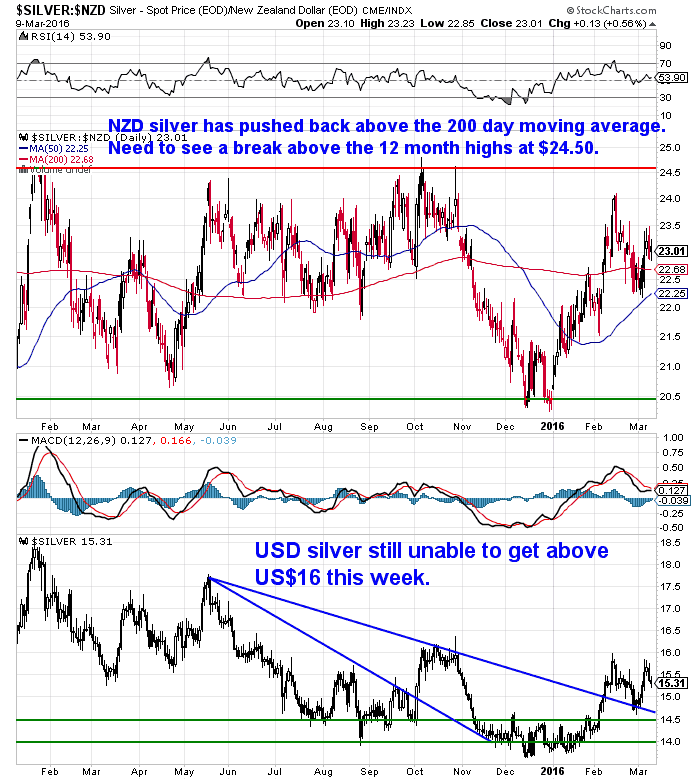 Deflation Coming to NZ? RBNZ Worried it is

Like we said earlier, the NZ Dollar took a dive this morning when the RBNZ made a rate cut of 0.25% which surprised many it seems. It had edged up above the converging 50 and 200 day MA’s but has been knocked back down to them today. 0.68 cents again proved a tough level for it to get above. So for now a move higher would seem unlikely. Especially with the expectation of more rate cuts ahead now. 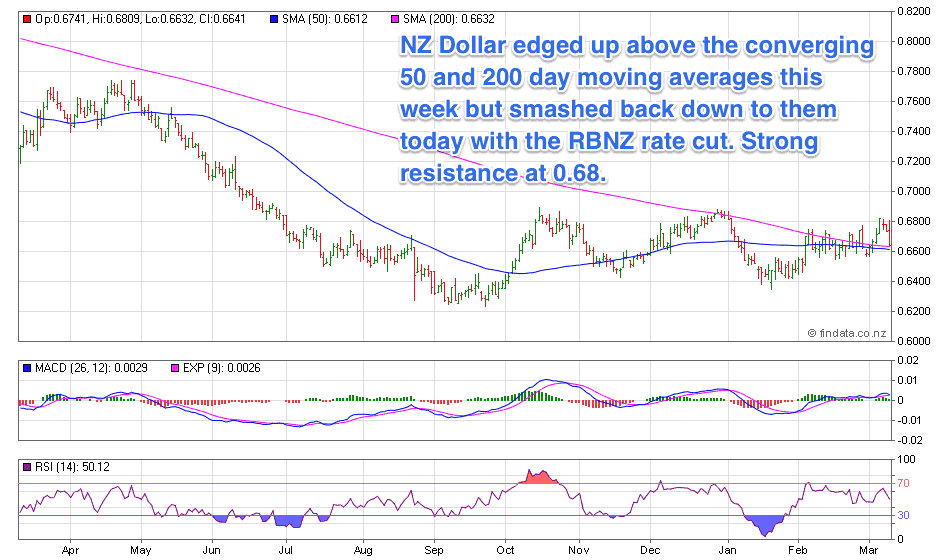 Here’s a rundown of what the RBNZ announcement said.

We’d say the key point is that lower inflation levels have them spooked. Like just about every other central bank on the planet, their fear is of deflation setting in (well apart from the likes of some like Venezuela where very high inflation rates are the worry instead!) So where to from here?

Well, that leads us into this weeks feature article. 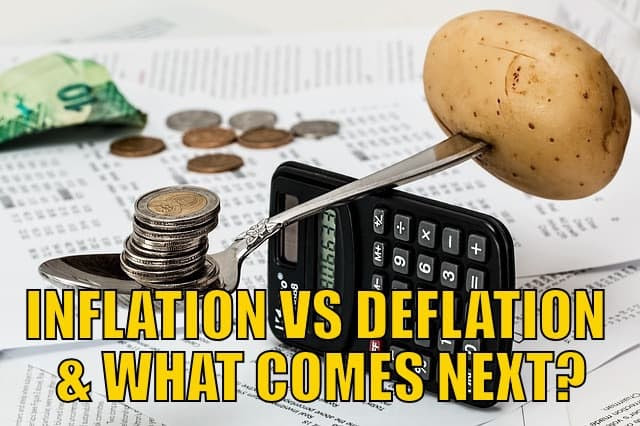 Inflation Versus Deflation and What Comes Next?

But Federal Reserve Worried About Inflation?

Interestingly while the Reserve Bank here is cutting rates, Jim Rickards believes the US Fed will shock everyone and raise them on the 16th March. (Although he still thinks they’ll about face in the long run after they’ve made things worse).

The Daily Reckoning noted that:

“Jim knows the market’s dismissing a rate hike on the 16th. But he watches the Fed through a microscope more finely calibrated than most. And he says a rate hike this month is still on:

The market does not expect a rate hike in March. In fact, the market is giving low odds of any rate hikes in all of 2016. Meanwhile, the Fed is moving at full throttle toward a rate hike…

The market’s dovish view has made it more, not less likely the Fed will raise rates in March. The dovish interpretation caused equity markets to rally the past two weeks in expectation of no rate hike. The rally eases financial conditions, which makes it easier for the Fed to raise rates.

Why is Janet Yellen steering headlong for a rate hike? Because she’s guided by phantoms. Jim:
“Yellen does not see a recession. Her forecasts, using badly flawed models such as the Phillips curve, NAIRU and FRB/US, are signaling steady growth, tighter labor markets and inflation just around the corner.”

The Phillips curve says, for example, that lower unemployment leads to higher inflation. And inflation must be ’round the bend since unemployment is so low. So she has to head it off at the pass.But the Phillips curve exists solely upon hearsay evidence. The stagflation of the 1970s should have discredited the witness for all time. But Janet Yellen is like a juror at the O.J. trial. She still swallows the story. And so she thinks a rate hike this month reflects healthy economic growth.Jim thinks the Fed announcement on the 16th will blindside the market. He says that could lead to a “train wreck.” There’s only one way to avoid that unpleasant outcome, says he. And there isn’t much time. Janet Yellen would have to telegraph her rate hike to the market ASAP. That way, the market could adjust in an orderly fashion before the Fed meeting in 10 days:

Will a Fed rate hike in March lead to a train wreck by crashing into market expectations? It depends on whether Janet Yellen can signal the markets that her runaway train is not stopping. Janet Yellen needs to start blowing the Fed’s whistle and warning markets now — before it’s too late.
Think she will? No whistle yet…”

We’ve discussed a lot recently how there is a move towards outlawing cash gloablly. Mainly as it will assist the central planners with controlling our finances more and taxing us more. Perhaps even more importantly with more and more countries heading down the road of negative interest rates, it will also stop people from escaping this by hoarding cash.

The main argument we’ve seen used is that cash is just for criminals and terrorists – so who needs it?

Well, here’s a reason why we’re likely to see more of a clamp down on cash here in New Zealand as well then. A headline this week read:

Financial transactions thought to be linked to terrorism have almost doubled in the past two years.

“Information released by the police under the Official Information Act showed a rise from 21 cases in 2014 to 40 in 2015 and the latest figure was 24.”

Another straw in the wind for cash perhaps? So instead of hoarding cash, maybe hoard some gold or silver instead?