Home / Weekly Newsletters / Lloyd’s of London: Biggest Risk to Auckland and Wellington is a Market Crash

As we have been expecting gold in NZ dollars pulled back over the week, although the weakening Kiwi dollar dampened the fall to 1.68%. We are now out of overbought territory but could well fall further yet with the Kiwi dollar possibly due a bounce higher before long.

Gold in NZ Dollars remains firmly in a uptrend while in US Dollar terms it is just the opposite this year (See bottom half of chart for US Dollar gold). 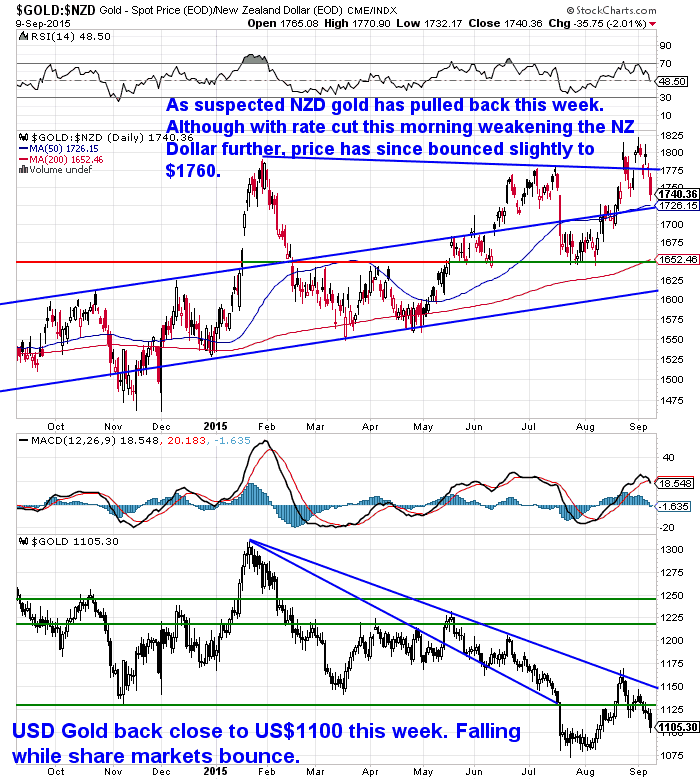 Silver in NZ Dollar terms continues to trade in a more and more compressed range as can be seen below. The wedge formation it is in will have to be broken out of soon.
As always it’s a case of which way?

Will it continue in the upwards trend from late last year? If we knew we wouldn’t be writing this email to you! 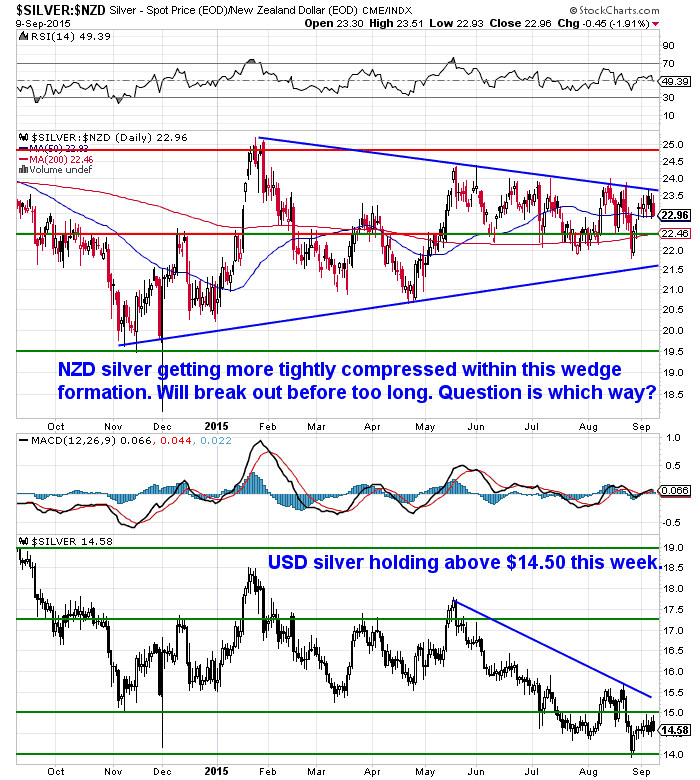 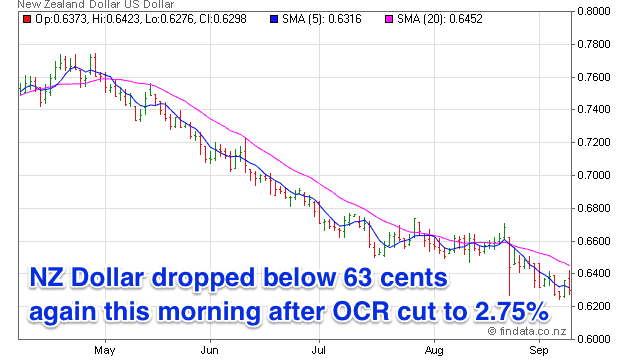 At some point this down trend will change.

However for our money it seems most traders aren’t pricing in the possibility of a recession in NZ yet. Some of the bank economists we’ve read have talked about the possibility but that is what it remains according to them, a possibility but not in their forecasts. The BNZ seems the most gloomy but even they are saying they expect annual gross domestic product (GDP) to grow 1.7%.

The RBNZ press release finished with:

“A reduction in the OCR is warranted by the softening in the economy and the need to keep future average CPI inflation near the 2 percent target midpoint.  At this stage, some further easing in the OCR seems likely.  This will depend on the emerging flow of economic data.”

Most of the bank economists are also expecting just one more 0.25% rate cut to 2.5%.

However buried in “Box D” of the accompanying RBNZ September Quarter Monetary Policy Statement was the following:

The statement goes on to say this scenario would justify “further monetary policy stimulus” and so the 90-day interest rate could then decline to around 2 percent over the next year.

Our pick is that this scenario is the one that plays out, rather than just being the distant possibility that the RBNZ lays out. So we’ll see interest rates fall even further than most expect.

Looking at the Heavy Traffic Index first, ANZ points out it has declined during seven of the last eight months, declining in August further to a 0.3% drop in July.”
Source.

This is perhaps NZ’s version of what is referred to in the US as “The Trann1es”.

No nothing to do with cross-dressing, rather the Dow Jones Transportation index.

This has been steadily ticking lower all year, even while the broader US stock market continued to rise. The argument being that transportation of goods is a leading indicator of how well the economy is doing. So ‘The Transports” were forewarning of falls in the rest of the US stock market. Which recently as you’ll have heard, turned out to be accurate. See the chart below.

So keep an eye on how the ANZ truckometer goes in the next few months we’d say.

The Australian economy certainly seems to be slowing on the back of sharply reduced exports to China. Some non-mainstreamers we’ve read are picking their interest rates to head to zero like much of the rest of the developed world.

We’re part way through reading Vern Gowdie’s book “The End of Australia” which is being heavily promoted by the Daily Reckoning Australia.

Vern is not the only one with a pessimistic view on Australia. 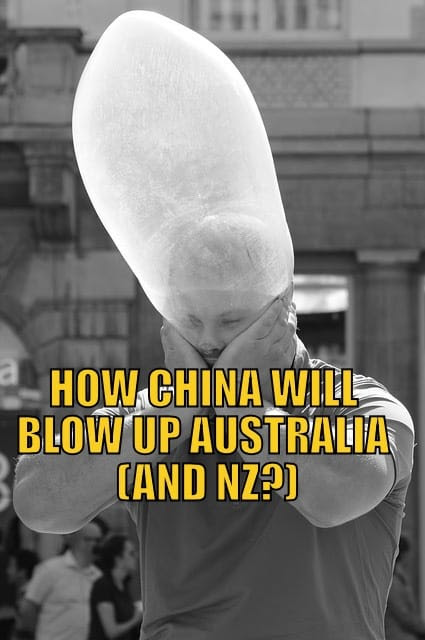 Mike Maloney put out a video “How China Will Blow Up Australia” that we posted on the site this week. He outlines why he thinks Australia will go into recession and have its property bubble popped as a result.

He also has some comments on New Zealand. So check out that video (just 7 mins). At the end of it we also take a look at some of the measures he discusses and compare the NZ numbers to that of Australia. And try to gaze ahead to what a slowing China and Australia mean for NZ.

We received an email this week from Ronni Stoeferle with details of his latest report. He states:

“an update of our views on recent market developments. In our view, things look very much in line with our “Scenario 1”, that we described in Chapter 10 “Valuations, Scenarios and Price Targets” (page 118 of the report).”

Here is Scenario 1 in case you haven’t read the last In Gold We trust report:

“Scenario I: The current economic cycle nears its end and the fairy tale of a self-sustaining recovery is increasingly questioned by market participants. This leads to a significant devaluation of the US dollar relative to commodities, since the Fed – as it has stressed time and again – will once again employ quantitative easing or similar interventions if occasion demands it. In this case gold would benefit significantly from wide-ranging repricing in financial markets. A stagflation-type environment would become a realistic alternative in this scenario, something that is currently on almost no-one’s radar screen.”

Back to Ronni’s recent email:

“Nothing has changed since beginning of July regarding the Incrementum Inflation Signal: Deflation is the name of the game and in fact, deflationary pressure has even strengthened further! In our view the markets are in the midst of a paradigm shift: Deflationary forces are increasingly spilling over from commodity into equity markets. The low volatility period on equity markets has likely come to an end!

Some of the key takeaways our new Chartbook are:
•    The FED is NOT out of bullets, it is just very reluctant to use them before we are at least close to a full fledged crisis; currency swaps, QE and negative interest rates are all on the table.
•    We therefore expect increasing market turmoil before the FED reverses course!
•    Shorting equities is a tricky business in an increasing volatility environment but could prove to be an interesting macro play until the FED gives in.
•    Traditional protection for equities (puts) by now are somewhat expensive, especially in comparison to some short term interest rates (eurodollar). In our opinion it is quite a safe assumption, that the FED would reverse course if US equities sold off further 10-15%.
•    A major deflationary event and (potentially internationally coordinated) reaction of central banks could finally be the trigger for the transition from deflation to stagflation!”

The chartbook can be downloaded below. If you haven’t read the In Gold We trust report from earlier this year, or thought it looked too long, then definitely have a skim through the Chart Book instead.

In Gold We trust ChartBook

Lloyd’s of London: Biggest Risk to Auckland and Wellington is a Market Crash

Interestingly the study cites a sharemarket crash as the biggest threat by a country mile to both Aucklands and Wellingtons economies.

New Zealand, these are things you should be worried about

“That is predominantly the effects on the share market from extreme movements in share prices and we’re talking about the value of the interruption to economic activity as a result of a market crash over five years,” Galloway said.

The index estimated $11.84 billion of New Zealand GDP was at risk from many man-made and natural threats during the next decade.”

You can also click through to Lloyd’s interactive site to profile threat levels by Location, City, and Threat type.

Here are the top 5 threats and links to the Lloyd’s data for Auckland & Wellington:

For most of these risks you need to have your household prepared with Food, Water, Emergency Lighting etc. Check out our sister site Emergency Food NZ for any of that. We’ve added a few new products in recent weeks.

In terms of a stock market crash, the two assets with no counterparty risk Gold and Silver will likely hold you in good stead for that occurrence.

We were a bit busier today, perhaps the interest rate cut this morning got people thinking about what lies ahead?

3 thoughts on “Lloyd’s of London: Biggest Risk to Auckland and Wellington is a Market Crash”